Japan’s Shinkansen Moving On to the Next Generation

Japan’s Shinkansen first began operating in 1964, and since that time a rail network covering 3,280 kilometers(*1) has been built from Hokkaidō in the north to Kyūshū in the south. The trains, excluding “mini Shinkansen,” travel at speeds exceeding 200 kilometers per hour. At the top of the list is the Tōhoku Shinkansen, with a speed of 320 kilometers per hour. Today about 420 million passengers enjoy comfortable, high-speed travel on the Shinkansen each year, for an average of some 1.15 million riders per day (as of 2016).

Development of the Next-Generation Shinkansen Is Underway

The train cars are, of course, a central component of the Shinkansen transport system. High-speed performance, safety, comfort, low energy use, and environmental friendliness are all essential. Shinkansen cars that satisfy these strict conditions are broadly divided into two groups. The first group is for warm regions, such as those served by the Tōkaidō, San’yō, and Kyūshū Shinkansen, while the other is for the cold and snowy regions served by the Tōhoku, Jōetsu, Hokuriku, Yamagata, and Akita Shinkansen. The main cars are the N700A used on the Tōkaidō and San’yō Shinkansen in the first group and the E5 and H5 series cars used on the Tōhoku and Hokkaidō Shinkansen in the second group.

The N700A debuted in 2013, but the N700 series itself debuted 11 years ago, back in 2007. The E5 series cars have been in use for seven years since their debut in 2011. The N700A, E5 series, and H5 series cars have all reached the stage where there is very little room left for improvement, as is evident from their lengthy period in service as the backbone of Japan’s high-speed, long-distance rail network.

Both Central Japan Railway Company (JR Tōkai), which developed the N700A, and the East Japan Railway Company (JR East), which developed the E5 and H5 series, announced work on their development of next-generation cars in 2016–17. Both companies will first produce test cars, the N700S test car by JR Tōkai and the E956 model, nicknamed “ALFA-X”, by JR East. The N700S made its appearance in March 2018, while the ALFA-X is scheduled for completion in the spring of 2019. The shape of the Shinkansen in the 2020s comes into view if we understand the innovations and the developmental aims adopted for the N700S and ALFA-X.

Toward Lighter Weight and Smaller Size

At first glance, the N700S appears little changed from the current N700A. This is because development aims for the introduction of new equipment and further refinement of onboard systems while leaving the body and other basic structures the same. Although the N700S is not flashy in this respect, it adopts many innovations. The major characteristic is the thorough pursuit of lighter weight and smaller size in the equipment and machinery beneath the car floor.

Cars on the Tōkaidō and San’yō Shinkansen

* Operated by West Japan Railway Company (JR West). Others are used by both JR Tōkai and JR West.

Lighter weight in electric motor-powered railcars has been achieved with reductions of about 140 kilograms in the motor section and about 75 kilograms in the bogie frame, for a total of 215 kilograms. While this is only about 3% of the approximately 7 tons that a bogie weight in these railcars, reducing weight even by grams is a challenge on the highly developed Shinkansen railcars, making this a significant weight reduction.

Reducing the weight of equipment makes it possible for cars to travel at faster speeds with an unchanged power output. It also enhances energy efficiency by reducing the amount of electricity consumed. Lighter cars also mean reduced running noise and vibration. This increases the comfort inside the train while also mitigating the external effects produced along the rail line.

Size reductions also bring many advantages. As converters and other electric equipment installed beneath the car floor become smaller, types of equipment that previously required space from three cars can now be fit in a single car.

Freeing Up Space for Batteries

Once reducing the size of equipment frees up empty space beneath the car floors, how will it be used? JR Tōkai has said it will conduct trials of cars equipped with lithium-ion storage batteries with sufficient capacity for self-propulsion. If this is practical, it would allow cars to travel under their own power while separated from the power source in overhead lines. This would certainly be a way to avoid the situation called standstill in tunnels and on bridges.

Although JR Tōkai has said nothing about this, there would also seem to be a further advantage in installing large-capacity batteries. If it proves possible to store the electricity produced by regenerative brakes in these batteries, it would allow the use of these brakes for emergency stopping as well as in normal operation.

Regenerative brakes(*2) dampen the rotation of the axle with resistance from the motor as a power generator. They may be thought of as equivalent to engine braking in automobiles, a method that permits stable control of the vehicle, especially at high speeds. However, in emergencies all Shinkansen cars currently rely on friction disc brakes, not regenerative braking, to stop. The main reason is that regenerative brakes must send the power they output to the overhead wire, and so cannot be used when the overhead system has suffered a power outage, such as in a major earthquake. If the regenerative power can be sent to onboard batteries, however, these brakes can be operated even during major earthquakes, thus helping to achieve shorter braking times and stopping distances.

The development concept for JR East’s next-generation ALFA-X car aims for wide-ranging improvements in safety, stability, comfort, environmental friendliness, and ease of maintenance. The main target, however, is to raise the maximum speed. The ALFA-X project promises the possibility of commercial operation at a speed of 360 kilometers per hour.

Cars on the Tōhoku and Hokkaidō Shinkansen

* Operated by JR Hokkaidō. Others are used by JR East.
Note: The E956 series (ALFA-X) is a test car. The series name that will be used in commercial operations has yet to be decided.

Commercial operation at 360 kilometers per hour was also investigated in the development of the E5 and H5 series. However, operating costs rose due to increased energy consumption, and environmental measures to mitigate noise and vibration were also an issue, making the higher speed not commercially viable in these earlier cars.

JR East announced improved energy efficiency when developing the ALFA-X. While the company did not give details, this is believed to have come through attempts to reduce the weight of equipment and machinery. At the same time, engineers modified the shapes of the disc brakes and the pantograph that takes in energy from overhead wires, thus addressing acoustic issues with the parts that account for much of the noise emitted during train operation. 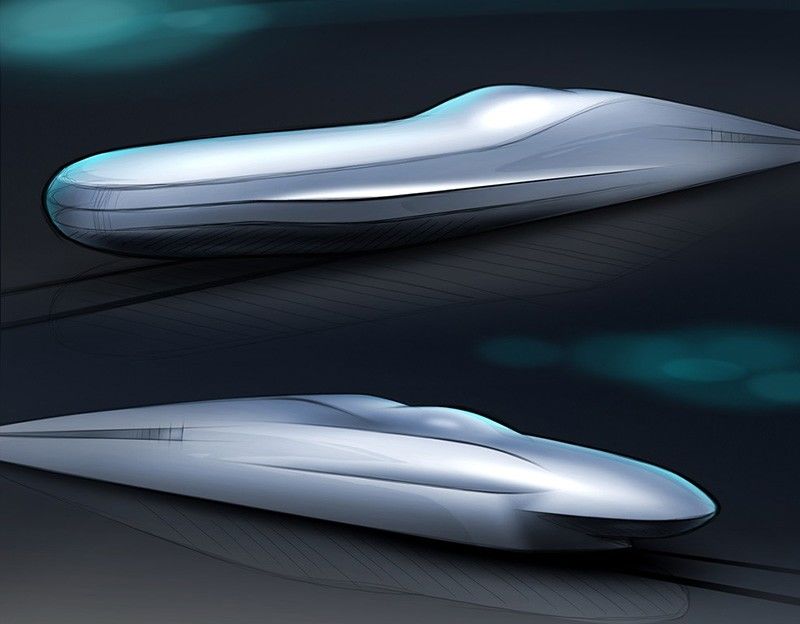 Image of the ALFA-X test cars. (Courtesy of JR East)

JR East is integrating new earthquake-preparedness measures in the ALFA-X based on its October 23, 2004, experience of a Jōetsu Shinkansen train derailing during the Chūetsu Earthquake. New “anti-earthquake dampers” actuate only when strong force from an earthquake is felt, suppressing the shaking of the car body and stabilizing the car movement if it is about to run off the tracks in an earthquake.

Also being tested are new “crushable stoppers” that allow temporary gaps around the strong pins that normally leave almost no gap between the car body and the bogie. Impacts during large earthquakes are mitigated when these stoppers are crushed by a large impact. This enlarges the gap so that the shaking of the body is not readily transmitted to the bogie, mitigating the strong forces produced between the wheels and rails. This is expected to make derailment less likely. 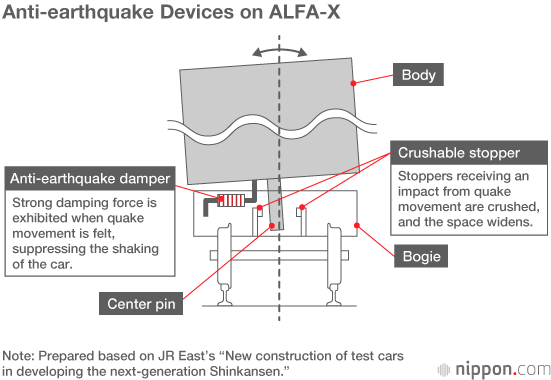 The New Cars: Not Flashy, But Solid

Some improvements that will go into both the N700S and ALFA-X have already been made. More detailed data on the operating status of onboard machinery and equipment will be sent instantaneously to control centers, along with image data from the greatly increased number of security cameras in the cars. While not evident to passengers, these changes should contribute significantly to improving Shinkansen safety and stability. Ideally the JR companies will go a step further and develop ways to take measures remotely from a control center when unexpected situations occur, such as trouble inside a car or instrument malfunctions.

The N700S and ALFA-X may be summarized as doing what needs to be done as the obvious next step. Other than the faster speed, nothing stands out. But that’s okay. The Shinkansen is not competing with anything else. If it operates as usual while running faster and more quietly than before, with less shaking and using less energy, what is there to complain about?

(*1) ^ Includes the Yamagata and Akita “mini-Shinkansen,” which travel on Shinkansen rail for part of their courses and switch to surface rail shared with ordinary trains for the rest. The length of the full-gauge Shinkansen track is calculated based on the operating kilometers, defined by JR as “the actual length of a railway line between two stations, regardless of the number of tracks along the line.”

(*2) ^ Motors have the same structures as generators, and so can be used to output electricity as well. Regenerative braking brings the train’s kinetic energy to zero in the course of stopping it, using the motor to convert part of this kinetic energy into electric energy.