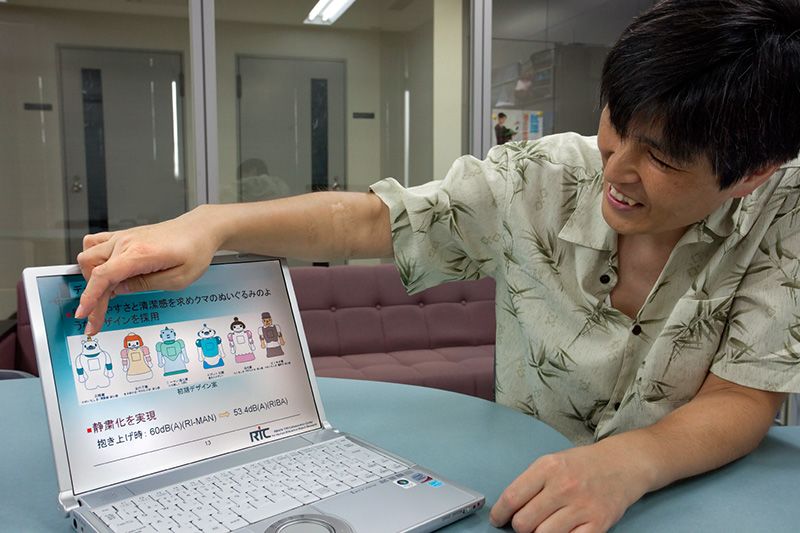 “The cute, teddy bear-like design of RIBA is intended to make the robot fit in comfortably with the caregiving environment and be accepted by care recipients,” explains Mukai Toshiharu.

Innovative technologies are likely to be crucial to Japan’s effort to cope with the demographic crisis arising from its graying population and low birthrate. One technology now available is RIBA (Robot for Interactive Body Assistance), the world’s first nursing assistant robot. The robot was developed by members of the robot sensory information research team of Riken-TRI Collaboration Center for Human-Interactive Robot Research (RTC), which was established by Riken and Tokai Rubber Industries.

The research team’s leader, Mukai Toshiharu, is justly proud of RIBA: “The robot is the epitome of harmonious engineering. It was only by striking a perfect balance between all of the robot’s elements—from its sensory functions, drive mechanism, and controls to the materials used and the design elements—that we were able to create this exceptional product.”

Equipped with two arms, RIBA is capable of lifting and carrying a care recipient, while supporting the back and the area behind the knees, like a groom gently scooping up his bride.

With one in five citizens now over the age of 65, Japan is fast becoming a super-aging society. More and more people require nursing care because of this trend but there are not enough people to lend a helping hand, as a result of the declining birthrate. This graying of the population is hardly unique to Japan: the same phenomenon is also occurring in Europe and North America as well as countries such as China, Thailand, and Singapore. It seems safe to say that the need for nursing care is quickly becoming a common concern worldwide.

Despite this evolving crisis, the frontlines of nursing care continue to rely almost exclusively on the power of human caregivers. This means that it usually requires several caregivers to lift and transfer a person from a bed to a wheelchair. Repeating this sort of physical task several times in the course of a day poses the risk of back injury for caregivers.

The initial concept for RIBA was to create a nursing assistant robot that would employ robot technologies in order to accomplish physically demanding tasks such as lifting people. It is no simple task, however, for a robot to be able to lift and carry a person, because the movements required are quite different from the case of an industrial robot grasping and lifting up an object.

Moreover, the amount of weight that a robot can lift is about 10% of its own weight. So, in order to lift a full-grown adult, the robot would have to be about as heavy as a car or similar object. Such a large robot could not be kept at a nursing care facility. And, of course, since a caregiving robot would have to operate in close contact with people, various precautions would have to be taken to not only prevent the robot from flipping over or suffering a collision but also to eliminate such dangers as fingers being pinched between the robot’s joints. 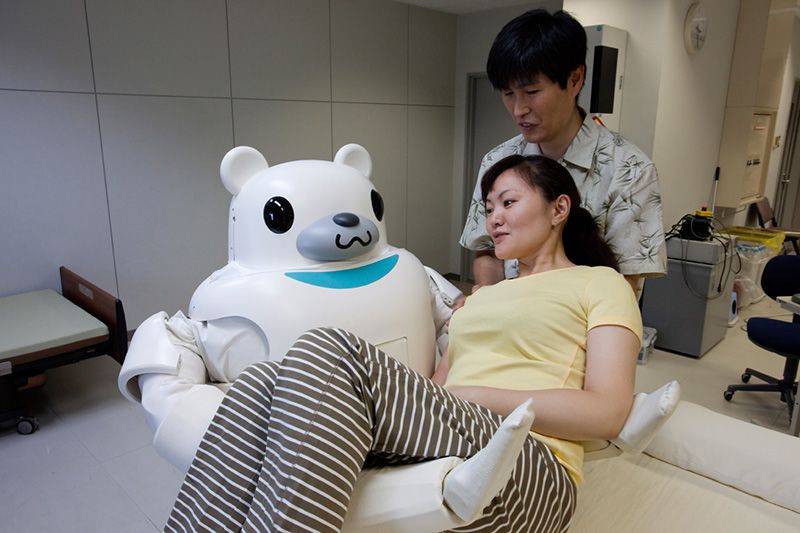 A human caregiver is present whenever RIBA is moving a person to ensure the safety of care recipients and also make them feel more secure by placing a hand on their back and talking to them.

In 2009, after his research team had cleared each of the developmental hurdles, Mukai unveiled RIBA to the media in 2009. At that press conference, RIBA demonstrated its abilities by carrying out the series of movements needed to lift, carry, and then set back down a person who weighs 61 kilograms. It was amazing that RIBA had this lifting capacity despite weighing in at just 180 kilograms itself. In other words, the robot is able to lift an amount equivalent to one third of its own weight. Mukai explains how this is possible:

“We were able to combine strength with a lightweight body thanks to a high-intensity resin for the forearms and an optimized arm drive mechanism. Employing a coupled drive mechanism also helped to effectively reduce the robot’s size. The use of two motors to power RIBA's arms makes it possible to perform the two distinct movements of bending and twisting. When it is necessary to bend and twist at the same time, the coupled drive mechanism allows each motor to handle a respective movement. And both motors can be used in tandem when a task involves only bending or twisting, thus enabling a major increase in load capacity. This is the basis for our ability to decrease the size of the motors while still achieving maximum output. RIBA’s joints are used to perform complex movements, so we also covered them with a special flexible material able to withstand the repetition of the same movement.”

Getting a robot to replicate the effortless way that a human being moves is a challenge. RIBA relies on cutting-edge technologies to perform its bending and twisting movements.

One key feature of RIBA is its ability to customize its “embrace” to suite the physique of each individual care recipient. The robot’s numerous tactile sensors allow it to make precise adjustments, such as moving its right arm up five centimeters, in line with data on the weight of the care receiver. This data can later be retrieved from RIBA’s memory so that it can immediately reassume the same ideal posture for a specific person.

The tactile sensors are also a tool caregivers can use to guide RIBA. Typically a caregiver will press gently on a person’s back and ask him or her to “move forward a bit" when instructing the care receiver to take a half step forward. And RIBA is able to respond to such instinctive guidance provided by caregivers. In addition to touch, a caregiver can communicate with RIBA by means of its specialized vision and voice sensors. 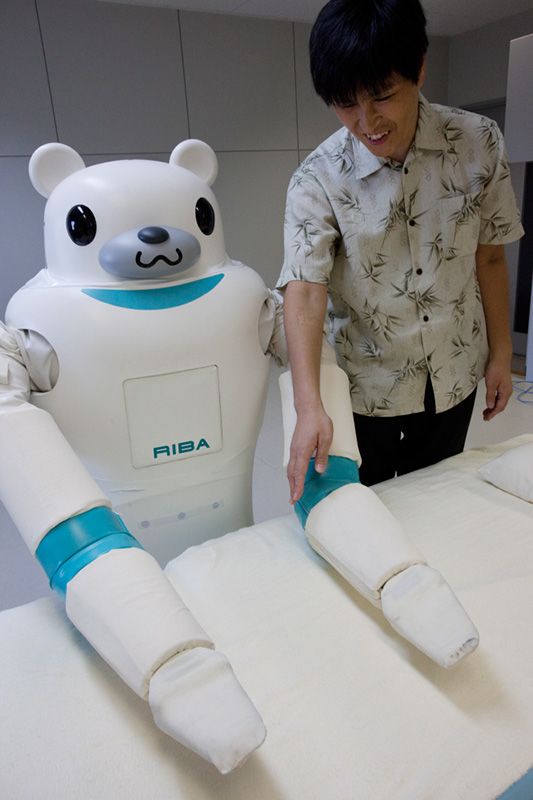 The tactile sensors equipped throughout RIBA allow it to be guided by caregivers who touch its arms or other parts. This ease of use for caregivers is another essential ingredient for popularizing a nursing assistant robot.

Initially, the RIBA research project was scheduled to come to an end in 2012, but it has been extended until 2015. The major technical hurdles to overcome now concern how RIBA can be designed to carry heavier loads, and how to make its movements as flexible as human motion by devising a way for the robot to make use of its entire strength. Mukai Toshiharu, as research team leader, says he is determined to overcome these challenges, with an eye to working out the legal and cost-related issues so that RIBA can be well on the road to commercialization by 2015.

The Japanese government expects the country’s over-65 population to have surpassed the 30-million mark by around the same time, so the sooner this nursing assistant robot hits the market the better.