Science Technology Apr 20, 2012
The National Institute of Advanced Industrial Science and Technology, Hokkaidō, has developed a state-of-the-art plant factory that is the first in the world equipped to cultivate transgenic plants and convert them into drugs, all on the same premises. 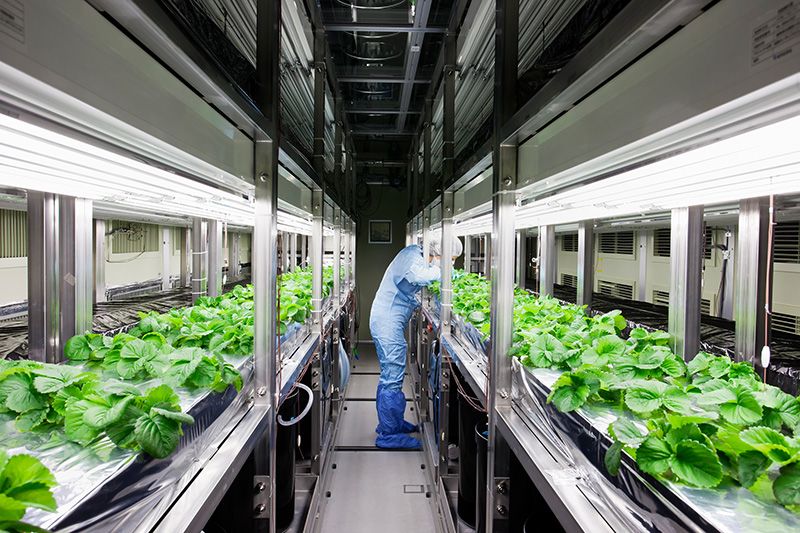 In a plant factory in Hokkaidō, strawberries implanted with genes that produce a special kind of protein are being grown to make drugs for canine periodontal disease.(*1) Cultivating genetically modified plants for pharmaceutical use calls for airtight facilities to make sure that the modified genes do not mix with regular plants and upset the ecosystem. The Hokkaidō facility, developed by the National Institute of Advanced Industrial Science and Technology (AIST), is the first plant factory in the world to satisfy this requirement. For the first time anywhere, every step of the production process, from growing the transgenic plants to processing them into drugs, can be completed within a hermetically sealed environment on the same site.

To make sure the modified plants do not contaminate the natural gene pool, the factory is equipped with security features not seen in the average plant factory. The atmosphere is kept under negative pressure so that no air escapes. Air inside the plant factory is filtered before it is released into the atmosphere. Water too is thoroughly sterilized before it is discharged. Anyone entering or exiting the factory must take an air shower. There are strict limits on people entering and leaving the premises and on internal movement of people and objects within the factory in order to keep the risk of gene dispersal to an absolute minimum. 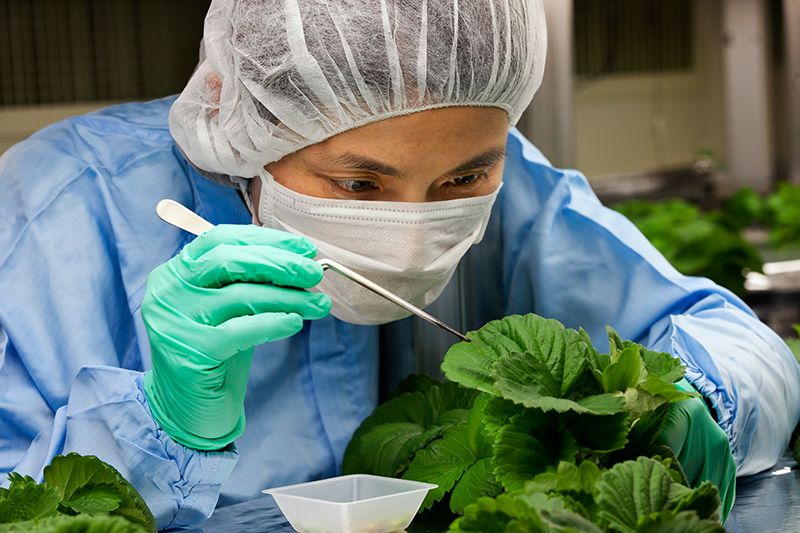 A researcher at work. 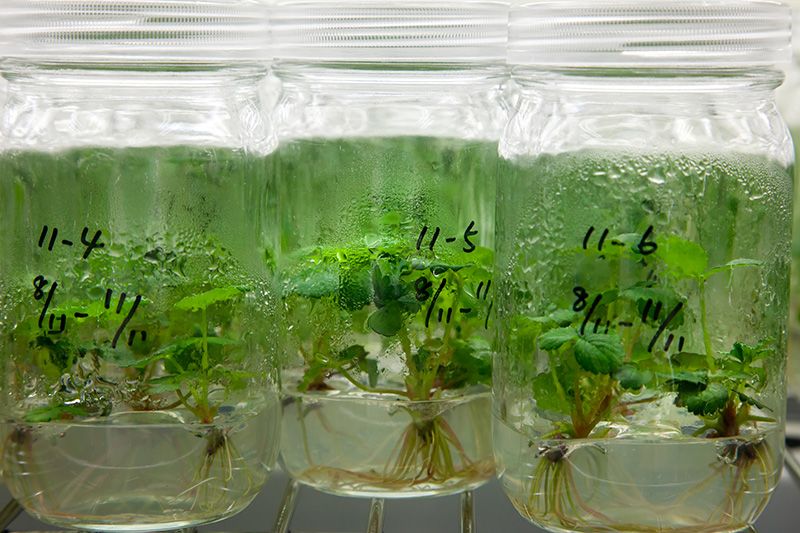 Tissue-cultured strawberry seedlings prior to being brought into the cultivation room.

At the center of the factory are two cultivation rooms, each about 30 m2 in size, where strawberries are grown hydroponically. The environment is entirely artificial–there is no soil in the cultivation rooms at all. The sophisticated artificial lighting system makes use of several different types of lighting: LEDs, fluorescent bulbs, and high-pressure sodium lights. The wavelengths and intensity of the lights can be controlled to provide the optimal environment for whatever type of plant is being grown. The system can even mimic the bright summer sun, allowing crops like rice and corn—which require strong light and thus were difficult to grow in conventional factories—to be cultivated as well.

Some 300 sensors are installed in the cultivation rooms and used to control room conditions precisely, including temperature, light, and wind direction. This creates a uniform environment for every plant.

“We’re producing high-quality plants for use in pharmaceuticals rather than food. This means that environmental conditions need to be absolutely consistent,” explains Matsumura Takeshi, head of the Plant Molecular Technology Research Group of the AIST Hokkaidō’s Bioproduction Research Institute. “Cultivation conditions in the factory are uniform, allowing us to recreate the optimal conditions for plant growth. This gives us higher productivity than other plant factories. With some crops, the yield is four to five times higher.”

In genetic engineering, specific genes are modified to endow organisms with particular new traits. These traits will enable them to produce beneficial proteins and other substances that scientists can use for various purposes. The commonest kind of genetic modification involves boosting the resistance of food crops to pests and disease. But because the technology makes it possible to obtain cultivars with precisely the desired traits, hopes are high that it will also be possible to use the technology to develop new drugs and treat genetic disorders.

The AIST plant factory in Hokkaidō grows strawberries that have been implanted with canine interferon genes and uses these specially modified strawberries to manufacture a treatment for canine periodontal disease. Interferons are proteins that cells produce when the body comes under attack from bacteria or viruses. Strawberries are convenient for several reasons. There is a wealth of knowhow about tissue culturing and cultivation of the fruit, and they can be grown by vegetative propagation. (This refers to a method in which plants are grown from vegetative organs, such as roots, stems, and leaves, rather than from seed.) The factory can produce 300 kg of strawberries a year, and enough interferon for over a million dogs. 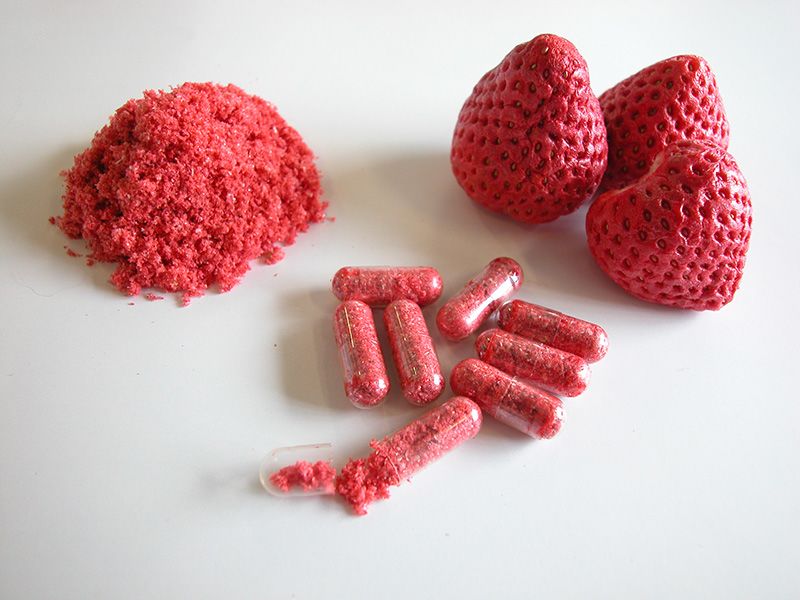 The strawberries take about five months to grow. First, seedlings of transgenic strawberries are grown from the parent strain. These are transferred to the cultivation room, where they bear fruit four months later. The deliciously red berries, containing interferon, are then crushed, freeze-dried, and pulverized. They are fed to dogs primarily in the form of pills.

Ordinarily, interferons and vaccines would be administered by injection. But oral administration of pills is easier and less stressful to animals. It is cheaper too, since no needles or other medical appliances are needed. “The interferon and vaccine are contained within the plant cells themselves,” says Matsumura. “It’s like being sealed in a capsule. This means that the substances are less likely to break down after entering the body, making this method more effective than administering interferons and vaccines directly by mouth. Smaller dosages can be used effectively.”

Building Toward the Future

Work on developing the plant factory started in 2005 as a collaborative project between industry, academia, and government. Equipment manufacturers provided the lighting, air conditioning, and other facilities, and pharmaceutical companies and agricultural organizations were also involved. The factory was completed in January 2007 and cultivation got underway soon after. Since then, Matsumura and his fellow members of the Plant Molecular Technology Research Group have been keeping a constant eye on conditions in the factory, from plant growth to the operational status of the factory’s equipment. A computerized system provides minute-to-minute updates on conditions in the factory. After repeated fine-tuning based on this information, the team has succeeded in getting conditions just right for the cultivation of transgenic strawberries, and the project is proceeding smoothly. 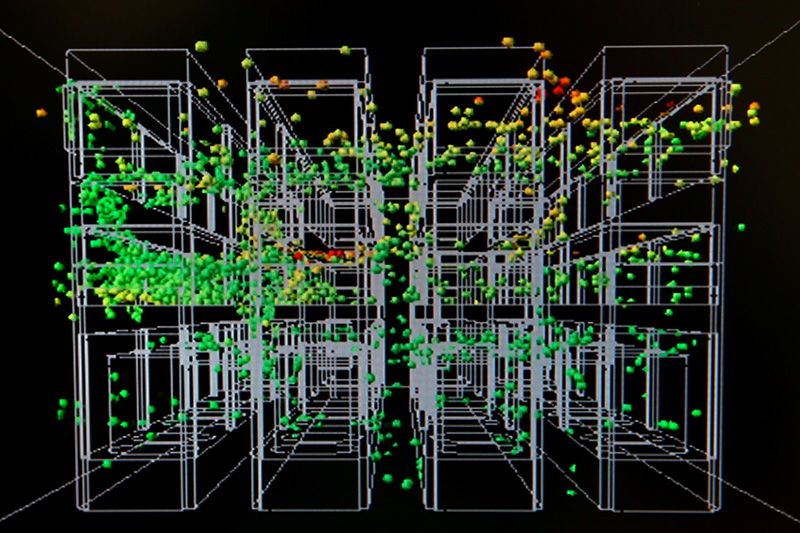 Data on the temperature, humidity, and other conditions in the cultivation rooms are sent in from nearly 300 sensors and spatially simulated on a computer screen. 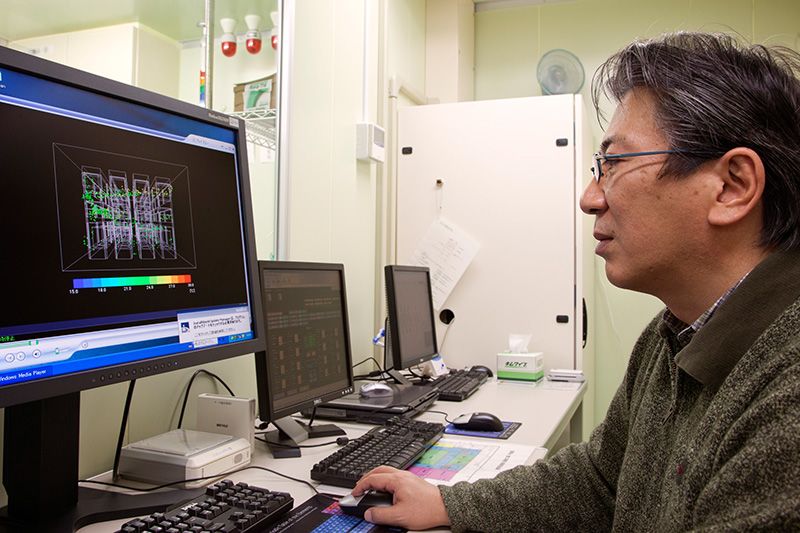 Matsumura Takeshi manipulates the display on the computer screen.

“The factory can produce consistent crops of high-quality transgenic plants in a completely sealed environment. Once the system is fully established, we hope to be the first to make commercially viable plant-made pharmaceuticals. Ｎumerous projects to develop transgenic plants are underway around the world right now. We are optimistic that our results will play a big part in moving plant biotechnology forward to the next level.”

In addition to strawberries, the factory has succeeded in growing a number of other promising transgenic plants, including potatoes that express a vaccine against avian influenza and rice and tobacco plants that express a cholera vaccine. A second factory that will build further on the results obtained here is scheduled for completion in October 2012.

(*1) ^ Canine periodontal disease, or gum disease, is a common ailment that affects around 80% of dogs aged two years or older.