Science Technology May 21, 2012
Induced pluripotent stem cells known as iPS cells have two crucial abilities: they can differentiate into the cells that build many of the body’s tissues and organs, and they can proliferate almost indefinitely. Established in April 2010, the Center for iPS Cell Research and Application (CiRA) at Kyoto University has been studying these cells and conducting cutting-edge research into their potential use in regenerative medicine.

On the Cutting Edge of Stem Cell Research

Induced pluripotent stem (iPS) cells were first developed in 2006 by Professor Yamanaka Shin’ya of Kyoto University. These new cells marked a major breakthrough in stem cell research, and have huge therapeutic potential. The iPS cells are obtained by genetic manipulation. Inserting four specific genes into a small sample of clipped skin cells allows the skin cells to be developed into cells of a completely different shape and to proliferate almost indefinitely. The cells produced this way can differentiate into any type of cell or organ, including bone, heart, nerve, liver, and blood. 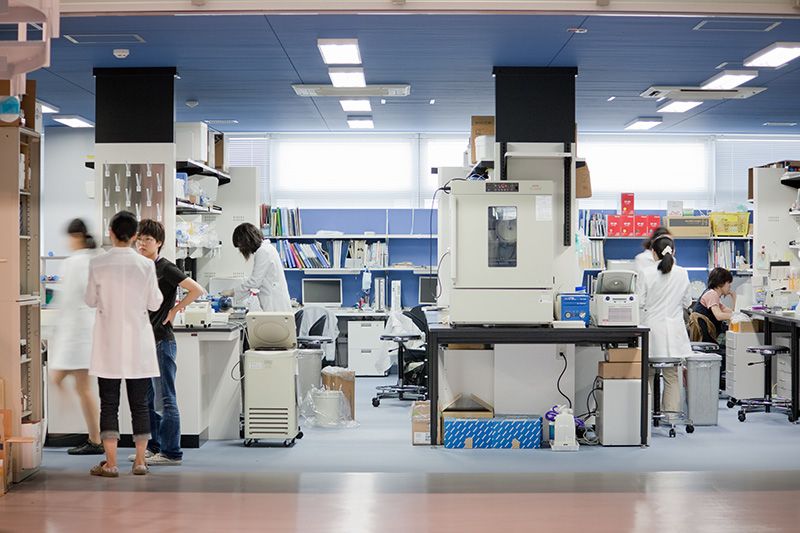 An open lab on the fourth floor of the CiRA building. Cross-disciplinary research is carried out in a completely open research environment (Photo: CiRA, Kyoto University, June 2010).

What makes iPS cells unique is their ability to proliferate almost indefinitely and to differentiate into any kind of cell. The mechanism is the same as when a fertilized egg divides and differentiates to form cells and organs, or when skin or blood vessels regenerate after being injured. Artificially induced “stem cells” have the capacity to change into other cells and develop into various cells and organs through division and differentiation.

Embryonic stem (ES) cells have similar properties. But with ES cells, there are ethical issues involved, since they are taken from embryos. Because iPS cells can be developed from somatic cells (a general term for cells other than reproductive cells), they are much less problematic ethically. Professor Yamanaka’s easy and efficient technique develops iPS cells by changing somatic cells into pluripotent cells. At the moment, work is being done to try to overcome issues such as immune rejection response and tumor formation after transplantation of iPS cells. If these problems can be overcome and it is confirmed that iPS cells can be used safely, there are high expectations for these cells in a wide range of clinical applications.

The most promising application is in the field of regenerative medicine. Take the example of a person with severe heart disease: iPS cells created from that person’s skin cells could be induced to divide and differentiate into heart cells that could then be transplanted back into the patient’s heart. The chance of a rejection response in this case would be minimal, since the graft is made using the patient’s own cells. The iPS cells could also be used to produce cells or organs with effects mimicking the symptoms of various incurable diseases. This might lead to breakthroughs in elucidating the causes of the diseases and developing effective drug treatments.

When skin or blood vessels are injured, platelets block and cover the wound and play a key role in stopping the bleeding. Thrombocytopenia is a condition resulting from a deficiency of platelets. Effective treatment usually involves transfusion of human platelet preparation. But platelets lose vital activity easily, and with current techniques they can only be preserved for four days after collection. In some areas supply cannot keep up with demand. Another problem is that with repeated transfusions, antiplatelet antibodies are produced (most of these are antibodies produced in response to the presence of the donor’s HLA(*1) in the platelet preparation). This leads to a danger that the platelets will be rapidly eliminated as a result of an immunological rejection. 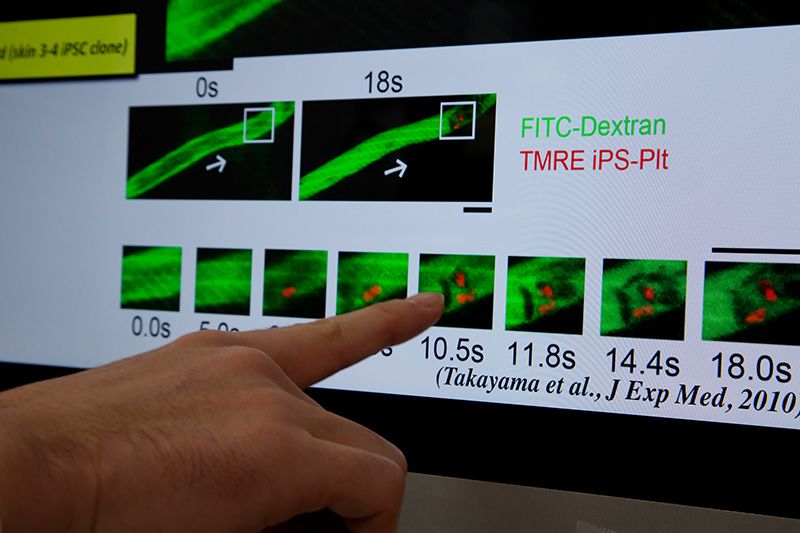 Platelets made from human iPS cells transfused into mice. When the vascular endothelium was damaged with laser irradiation, these human iPS cell-derived platelets gathered at the wound and formed blood clots.

“If platelets could be made artificially we would no longer have to rely on blood donations. That would avoid problems with supply. And using platelets developed from iPS cells taken from the patient’s own somatic cells would avoid problems such as immunological rejection as well,” says Assistant Professor Takayama Naoya. Takayama previously worked as a hematologist, and says his biggest wish in those days was for platelets that “could be made in a test tube.”

Takayama has been working on pluripotent stem cells and blood cells for many years. He has now succeeded in making megakaryocytes, the bone marrow cells responsible for producing platelets, and in obtaining platelets from them. In an experiment using mice whose blood vessels were damaged by lasers, transfused platelets derived from human iPS cells functioned normally, gathering at the wound and forming blood clots to stop the leakage.

“We know that there is a risk of tumor formation with iPS cells,” Takayama says. “But platelets and red blood cells do not have nuclei and therefore cannot develop into tumors. This means they can be used safely if they are transplanted after irradiation to prevent the proliferation of other cells. In that sense, iPS cell research could be said to be fairly close to clinical application in the field of hematology.” 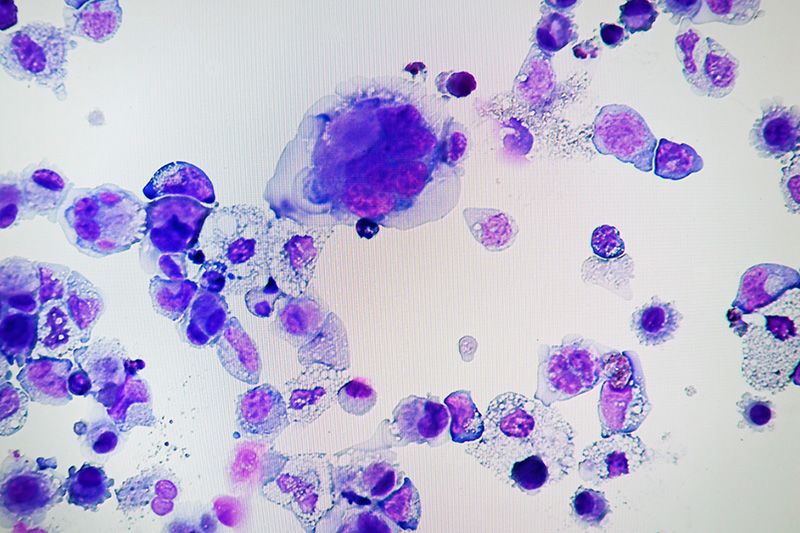 Large numbers of platelets would be needed in actual clinical applications. Takayama says that work is underway on developing a technique for making stable platelets more efficiently. In the future we hope it will be possible to make hematopoietic stem cells, which are the source of blood cells, from iPS cells. This would be hugely beneficial in treating blood diseases for which there are currently no effective treatments. 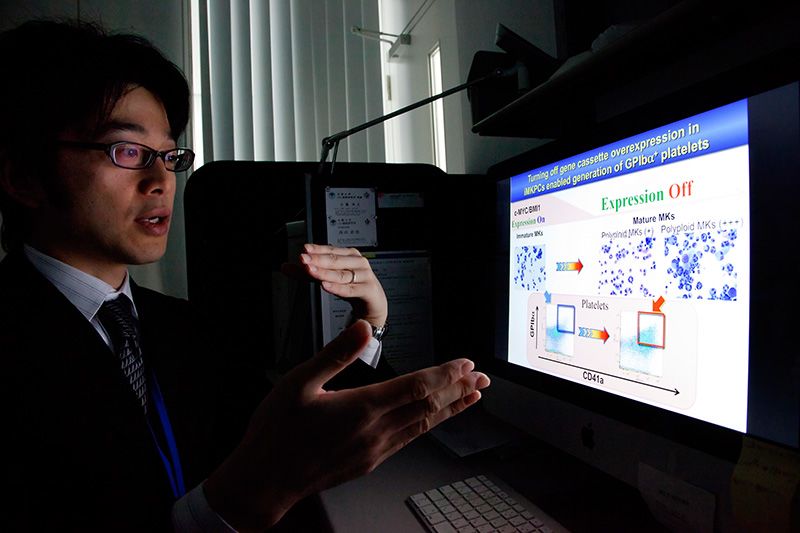 Platelets can also be made from ES cells. But using iPS cells allows multiple cell lines to be easily established, so that those cells that are more suitable for producing platelets can be easily selected, leading to efficient production of the platelet preparation.

“At CiRA, the objectives of our research range from basic research to projects like this that are close to clinical application. In the future, we have ambitions to create a reserve stock of iPS cells for medical use. One of the best things about CiRA is that research is conducted in a cross-disciplinary fashion, in open laboratories. I am a blood specialist, but I draw a lot of inspiration from the ideas I get every day from researchers working on other organs or carrying out basic research. These ideas provide hints for my own research.”

“Based on information from iPS cells that generate platelets efficiently, we have begun producing platelets in large quantities,” says Takayama.

The basic techniques for iPS cells have been recognized by patents in Europe and the United States, and preparations are also moving forward for developing the commercial potential of the invention. A number of scientific papers have reported successful differentiation of human iPS cells into nerve, muscle, and other tissues. This is an area that is sure to be watched with anticipation in the years to come.

(*1) ^  Human Leukocyte Antigen, or HLA, is manifested in almost all the cells of the body and acts as a histocompatibility antigen (identifies the body’s own cells during an immune system response). HLA type plays an important role during cell transplantation. Cells that do not match HLA are identified as “alien” and eliminated by the immune system.