Leading the Fight Against Radioactive Pollution

Science Technology Jun 20, 2012
At the National Institute for Materials Science (NIMS), in Tsukuba, Ibaraki Prefecture, scientists are developing new applications with the potential to bring safe drinking water to millions and resolve the nightmare of radiation contamination that has plagued Japan since last year’s disaster at the Fukushima Daiichi nuclear power station.

Unlocking the Power of Nano

Sherif El-Safty crumbles a pinch of specially treated silica powder into a test tube of aqueous solution. There is a twinkle in his eye as he holds the vial to the light. Within seconds the water turns green, indicating the presence of iodine.

“When the material detects the targeted toxin, it changes color. But we’re not just detecting the toxin—we’re absorbing it too. This is very important,” El-Safty says. “In just a few seconds, the solution is decontaminated. Previously, this was not possible. The change in color shows the concentration of the toxin. Four functions in one: removal, visualization, estimation, and specificity. That’s what our new technology is all about.”

NIMS is one of the world’s leading centers for research on mesoporous materials, a type of nanomaterial containing vast numbers of regularly arrayed vacant spaces called pores. Each of these pores has a diameter just 2–50 nanometers in size (one nanometer is one billionth of a meter). The material is like a honeycomb of tiny holes: the combination of nano-unit size with a huge surface area makes such materials rich in potential.

Japanese scientists were among the first to make major breakthroughs in the field of mesoporous materials, some 20 years ago. El-Safty himself came to Japan in 2001, and is now a permanent member of the NIMS staff as well as a professor at Waseda University. Originally from Egypt, he heads a team made up largely of fellow researchers from the Middle East. El-Safty and his colleagues are part of an impressively international environment at NIMS, where the cafeteria hums with conversations in many languages and the signs are written in Chinese, Hindi, English, and Arabic as well as Japanese.

“I’ve been working on these materials for about 15 years. Back then, this was an adventurous, exciting new field. Nanoparticles have always existed. People in ancient Egypt and medieval Europe used nanomaterials for their unique properties—without realizing what they were doing, of course. Nanoparticles offer special qualities of color and stability and hardness and flexibility. But the understanding of how to modify and fabricate these materials is new, and has incredible potential. Until around the year 2000, the thrill was to develop new materials. Since then, the focus has shifted, and we are now concentrating on finding practical applications for these new materials.”

Nano-Solutions to the World’s Water Problems

El-Safty’s own work has focused on the environment, using the properties of mesoporous materials to absorb pollutants and toxins from water and, more recently, from the air and soil as well.

“Water pollution is a major problem, particularly in the developing world. Eighty percent of all diseases come from the water. One billion people have no access to safe drinking water. Our task is simple: How can we use our materials to help alleviate this situation?”

El-Safty and his team work closely with colleagues in the Middle East and developing countries like Bangladesh and Indonesia.

“Countries like Saudi Arabia and Kuwait are rich in oil, but very poor in water. Most of their drinking water comes through desalination of seawater from the Mediterranean and Red Sea. This is not easy, and the water contains high concentrations of heavy metals and toxins like lead and arsenic.”

The mesoporous materials developed by El-Safty and his team can be used to get rid of these dangerous materials. Uniquely, they can perform two functions at once: They detect the dangerous toxins and capture them at the same time. The walls of the pores are coated with a special compound that absorbs specific targeted toxins. The structure of the nanomaterials and the small size of the pores allow the materials to detect and absorb the targeted toxins in very small concentrations—down to just a few parts per trillion.

“Our material is very successful at removing almost all of a toxin in one single stage: 99.97% in the case of arsenic. The material reacts very quickly—in just one minute or sometimes seconds.” El-Safty says his team’s materials are roughly 1,000 times more powerful than the best previous technology.

“Our materials could be used as small teabags for use in the home. Fill them with this powder, put the teabag in the water container and leave it overnight. In the morning, the water will be purified.”

A Specific Antidote for Every Poison

Importantly, the materials are specific for one particular pollutant. “In the case of water, you want to remove only a specific toxin and leave the other minerals that are beneficial for the health. Our material makes it possible to pinpoint one element and remove that element only. This is the first time this has ever been possible.” The nanomaterials can be “functionalized” for different toxins and different purposes via a process El-Safty calls “dressing.” 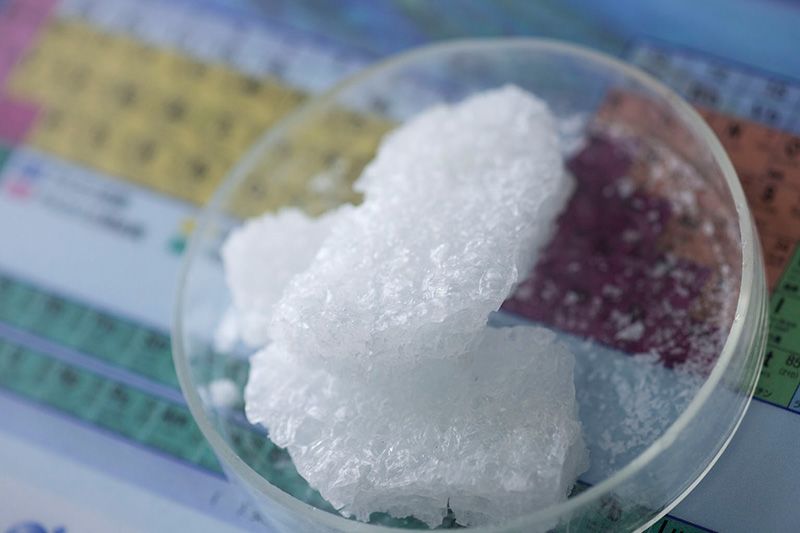 Mesoporous silica: Inside is a vast honeycomb framework of microscopic pores.

Another crucial breakthrough is that the materials are stable and long-lasting. This means the same materials can be used over and again. A major problem with similar nanostructures in the past was that the minute size of the materials made them extremely fragile and easily destroyed. “The lifetime of the material is vital,” says El-Safty. “If our material failed after one month on the market, no one would ever use it again.

In Japan, where access to clean water is normally not a problem, much of the team’s research has focused on finding ways to “mine” precious resources from recycled aluminum cans and other refuse. “Our materials can be used to separate a specific valuable element from the powder produced by a recycling company. We can isolate one specific element and reuse it. Most of the mass is made up of plastic and other junk. But it also includes useful elements like cobalt, platinum, and gold. These might make up 1% or less of the total. But nanotechnology is perfect at working at these low, low levels. And the cost of extracting these precious elements is very low: just ¥70 for a gram of palladium, for example, or ¥90 for a gram of gold. These elements can be detected in concentrations of just 0.5 parts per billion.”

Since the nuclear accident in Fukushima last March, however, El-Safty and his team have turned their attention to the pursuit of less glamorous elements. Shortly after the disaster, all the team’s other projects were halted in order to respond to a call from the government for urgent work on radiation decontamination. The team’s work in the field has already yielded three new patents.

“Those were incredible, hectic times—not just for us but for everyone,” El-Safty says. “Almost immediately after the disaster, the president of the facility told us to focus all our efforts on iodine. This was the first radioactive element detected after the accident, so the government asked us to find a way to detect iodine. But then came strontium! And then cesium! These elements are about 10 times bigger than the toxins we were dealing with in the case of water. This made it difficult to trap the molecules in the nanosized pores of our honeycomb framework. The interactions with these elements are very weak.”

After working day-in, day-out for months, using more than 100 different materials and dressings, the team finally succeeded in using the new technology to absorb iodine in low concentrations of one part per billion. Next came strontium. Recently, El-Safty made a breakthrough with cesium.

One thing that makes the technology especially attractive is that it is quick and cheap to make. “In a factory, it would be possible to create tons of the nanomaterials very quickly. This would make it possible to decontaminate many tons of water at once. At the moment, we are at the development stage, and things have to be checked for safety and so on. That is a task for the government and the private sector. We just produce the materials. But even in this facility, we can produce one kilo in just 30 minutes. The potential for mass-scale industrial production is huge. Mark my words, the future is nano!”

The color changes to indicate that a targeted toxin has been detected and absorbed. Dr. El-Safty has developed materials for a variety of pollutants and radioactive substances. 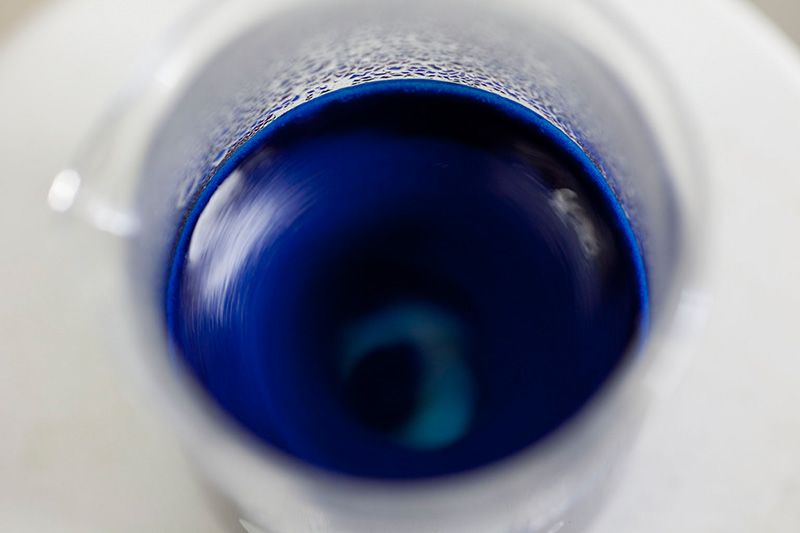 Scientists have previously attempted to boost the ability of Prussian blue to absorb cesium using porous materials with a large surface area. But this proved difficult to achieve with open-pored crystals made with a conventional mold.

“We had the idea of trying to etch the pores into the crystals,” Yamauchi explains. Their newly developed synthesis method works by making uniform particles of Prussian blue and adding water soluble polymers are added to the solution. This causes the polymers to attach to the surface of the particles. If the solution is made acidic, the parts to which no polymers are attached dissolve, leaving innumerable fine pores. 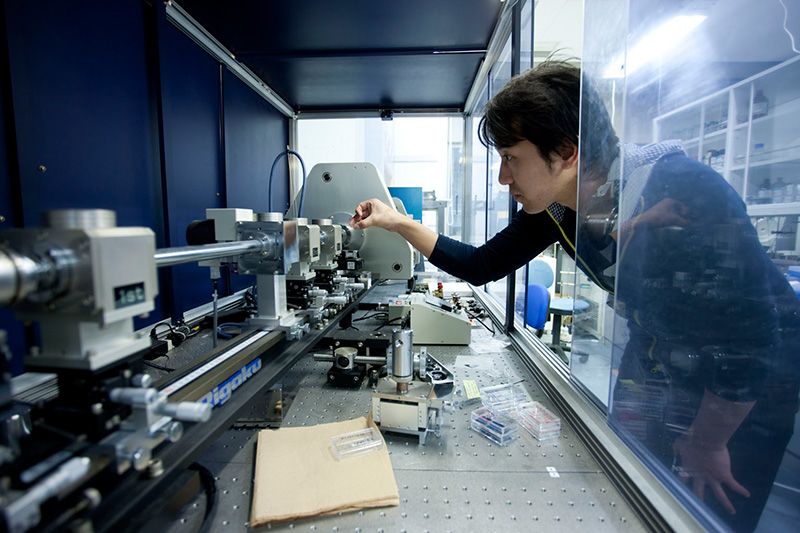 “The aim was to make the surface area as large as possible,” Yamauchi says. “To achieve that, we inserted large and small pores of all different sizes irregularly into the crystals.” The resulting crystals have a surface area of 330 m2 per gram—more than ten times larger than commercial Prussian blue. This means that ten times as much cesium can be absorbed using the same amount of Prussian blue.” Yamauchi hopes this improved performance will make it possible to use the material to treat contaminated soil and other substances.

Clearing up the radioactive materials that leaked during the Fukushima disaster will be a long-term operation. Various issues remain to be solved before Yamauchi’s new material can be produced and used on a mass scale, but in the laboratories of NIMS the first steps toward decontamination are already being taken.

(Based on a Japanese article by Satō Narumi. Photographs by Kawamoto Seiya.)