Science Technology Dec 18, 2012
The National Institute for Environmental Studies (located in Tsukuba, Ibaraki Prefecture) is building “time capsules” containing specially frozen samples of tissues and cells taken from endangered species. These samples hold vital information for scientists studying the causes of extinction and may lead to key breakthroughs in the fight against infectious disease.

Working to Preserve Endangered Species—Inside and Outside the Habitat

All over the planet, thousands of plant and animal species are on the verge of extinction. The last remaining Javan rhinoceros was killed by poachers in Vietnam last year. In Australia, the koala was recently designated an endangered species. The Japanese wolf has already disappeared from Japan, and the Ministry of the Environment warns that at least 1,500 more species are in danger of extinction. 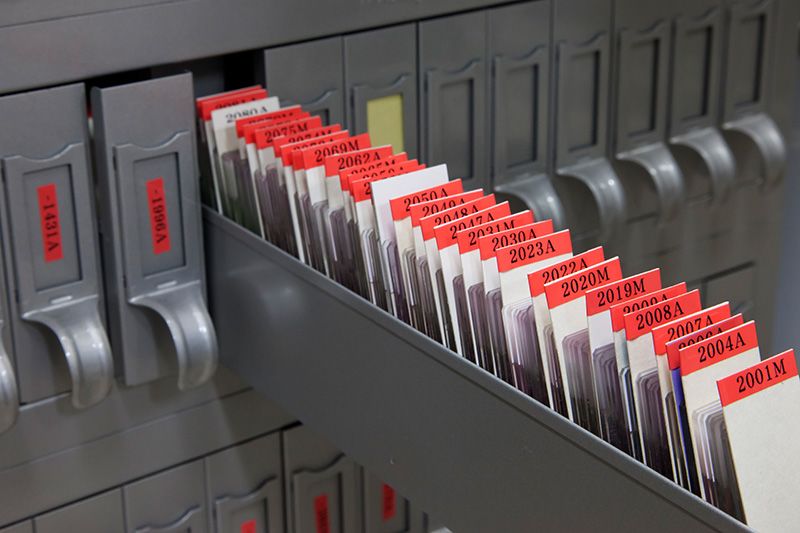 The National Institute for Environmental Studies is working to build a database of biological samples.

Sad as it may be, the news that the Javan rhinoceros has gone extinct may not seem to affect us directly. But the fact is that all organisms on the planet exist in a vast food chain—from the birds deep in the tropical rain forests to the smallest fish in the Arctic Ocean, we are all interconnected parts of the same chain. When one species disappears, the balance is lost. Although selection and extinction is a normal part of the natural cycle, what is happening now is different. The massive crisis of extinction now underway is caused by human activities, chief among them overfishing and deforestation.

Dr. Ōnuma Manabu is one of a team of researchers at the National Institute for Environmental Studies working to preserve animals in the wild. “In trying to protect endangered species, it’s essential to strike the right balance between the work you’re doing inside and outside the habitat,” he says.

“Take the project to restore the Japanese crested ibis to the wild, for example—one of the major conservation success stories here in recent years. One part of the project involved restoring the birds’ last surviving habitat on the island of Sado, where they traditionally lived alongside people in fields and close to human settlements. At the same time, there was a major effort led by the Ministry of the Environment to breed the birds in captivity using individuals donated by the Chinese government. These twin activities, both inside and outside the habitat, were both essential to the success of the project. As a result of these efforts, growing numbers of ibis have been released into the wild over the past few years.

Using “Time Capsules” to Study the Causes of Extinction 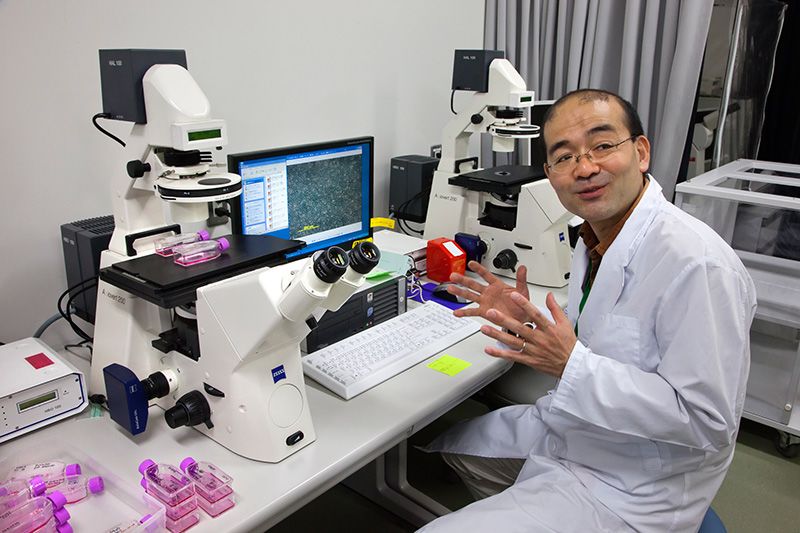 Dr. Ōnuma is working to preserve cell and gene samples from endangered species.

Dr. Ōnuma’s current research project involves preserving cells and genetic material from species on the verge of extinction. In this sense, it is a perfect example of what he calls “outside the habitat” work.

Since 2004, the National Institute for Environmental Studies has been part of a network involving research organizations, universities, and NPOs around the country. When the carcass of an endangered species becomes available, these organizations send the body to the institute for preservation after thorough testing for any infectious diseases. These samples include entire carcasses of animals killed in road accidents as well as the partial remains of animals that have been dead for some time. When the brain, lungs, and other organs can be removed in one piece they are kept as organ samples. Skin and muscle tissue are also used in cell cultures.

“Even after the animal is dead, cultures can be made and the genetic information retained as long as cells are still alive. Research has shown that cell cultures can be made up to three weeks after death for birds and up to one week after death for mammals. Life goes on at the cellular level even after decay appears to have set in,” says Dr. Ōnuma. “This was a remarkable discovery,”

Life on the cellular level continues even after the individual dies.

The NIES preserves its specimens in huge metal tanks known as “environmental sample time capsules.” The temperature inside the tanks is cooled to minus 150–160 degrees with liquid nitrogen, and contact with the external environment is kept to a minimum to protect the properties of the samples. This technology allows samples to be kept for anything up to 100 years.

For example, analysis might show a species with a certain genetic type to have a particularly high fatality rate with respect to a certain virus compared to a different species with another genetic type, which might be susceptible to infection but only rarely die. This kind of information can be useful in studying how viruses spread, and may prove vital in developing new drug treatments. Using cells from extinct and endangered species may help scientists to better understand the causes of the population decline. Building up a stock of information of this kind will also be useful in the future, when unknown viruses or infectious diseases are discovered.

The National Institute for Environmental Studies plans to open its biological sample database to public access in the near future. Dr. Ōnuma says he hopes that sharing this information with researchers from other institutions will lead to new ideas for further research using biological samples. 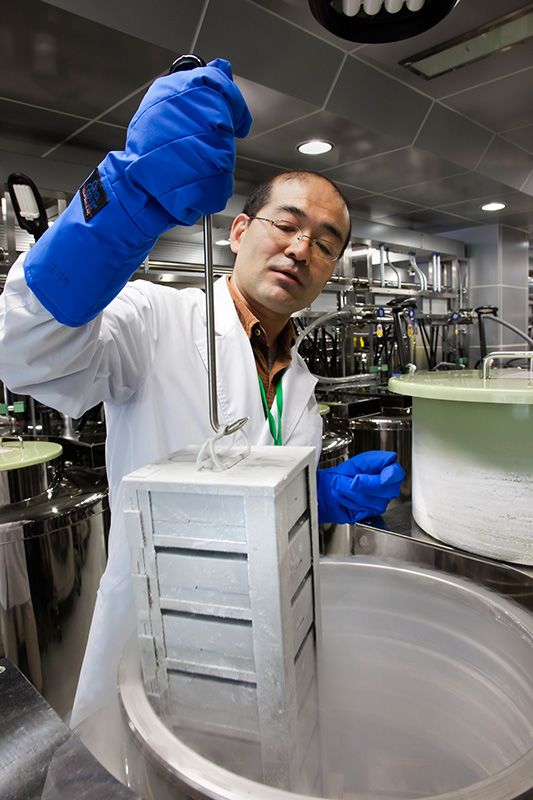 The collected samples may be useful in research to protect species.

Dr. Ōnuma previously worked at an orangutan rehabilitation center in Malaysia where he took care of orangutans that had been harmed by humans and worked to return them to the wild. Although Ōnuma and his colleagues poured themselves into this valuable work, many individuals could not be saved no matter how hard they tried. What could be done about these individuals? Ōnuma was looking for an answer to this question when he heard that the San Diego Zoo was cryopreserving tissues and cells.

“Of course it’s important to do what you can to save the individual animal in front of you. But I realized that research to preserve genetic information might make it possible to save more individuals and species in the long run. Research is already underway in the United States to make iPS cells and clones from biological samples. Rather than replicating the same type of research, our hope is that by analyzing our samples of genetic information we can help to save endangered species for the future and bring about breakthroughs in the fight against communicable diseases like avian influenza.”

Work with the environmental sample time capsules started in 2004. Five tanks have already been filled with more than 30,000 samples. The institute expects that it can continue collecting biological samples for another 20 years using its current facilities. 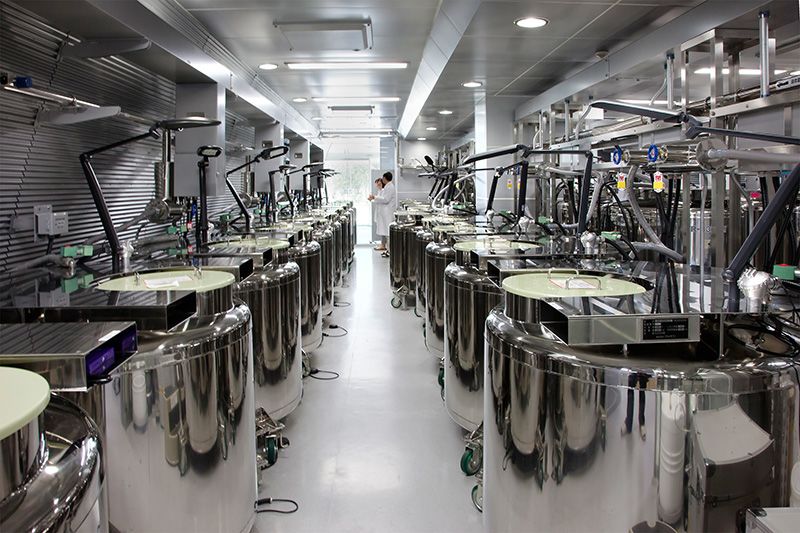 It is here in the National Institute for Environmental Studies that cells from Kin and Midori, the last Japanese crested ibises born in the wild in Japan, are preserved. Even after the ibis became extinct in Japan, they lived on at the cellular level. Cryogenically preserved samples like these may someday make a vital contribution to preserving the earth’s natural ecosystems. These time capsules kept at minus 150 degrees are filled with the warm breath of life.

Proliferation of cells taken from the Okinawa rail: Cell cultures started five days after death. Cell cultures made using skin and muscle tissue from dead individuals can be used in a wide variety of research (provided by National Institute of Environmental Studies).