The Science Behind Frixion Erasable Pens

Forms that must be filled out with a ballpoint pen have always vexed writers prone to handwritten typos. But this all changed 10 years ago, when Frixion Ball pens were launched in Europe. These pens leave marks on the page that look just like those from an ordinary ballpoint pen—but flip the instrument around and rub your writing with the eraser, and the heat produced by that friction makes it disappear before your eyes.

The original pens in the Frixion series, with caps and 0.7 millimeter tips, were the first in a range of more than 20 Pilot products using its specially developed erasable ink. The pens and related products have racked up total global sales of 1.5 billion units to date.

Frixion pens went on sale in Japan in 2007, the year after their launch in Europe. They caught on quickly with Japanese consumers, proving popular with everyone from small children to businessmen. This later spurred Pilot to expand the Frixion product line with similarly erasable highlighter pens and stamps.

Stamps filled with Frixion erasable ink. Launched in 2014 with 30 varieties, the Frixion stamp series was expanded to 60 varieties in the following year. (Calendar photograph courtesy of Pilot)

A Hit in Europe

The company’s French marketing director for Europe pushed for the initial launch to be in that market, rather than in Japan, because European children frequently used ballpoint pens and correction fluid when studying. By contrast, Japanese children generally use wooden or mechanical pencils at school. It proved to be a successful choice.

Frixion pens have become long-term bestselling products in Europe, where they are particularly popular with students happy to be freed from the need for correction fluid.

The original Frixion Ball pens with caps (left). Frixion retractable-point pens (right) were launched in Japan in 2010. Before putting these products on sale, Pilot had to refine its ink so it would not dry in a pen with no cap. (Photographs courtesy of Pilot)

The Science Behind Erasable Ink

Long years of development went into the thermosensitive Metamo ink that gives the Frixion line its main selling point. Microcapsules that form the pigmentation contain an equal mix of three substances: leuco dye that can change between colored and colorless forms, color developer, and color change temperature regulator. One of the most difficult tasks was to increase the temperature range for when the color appeared and disappeared. 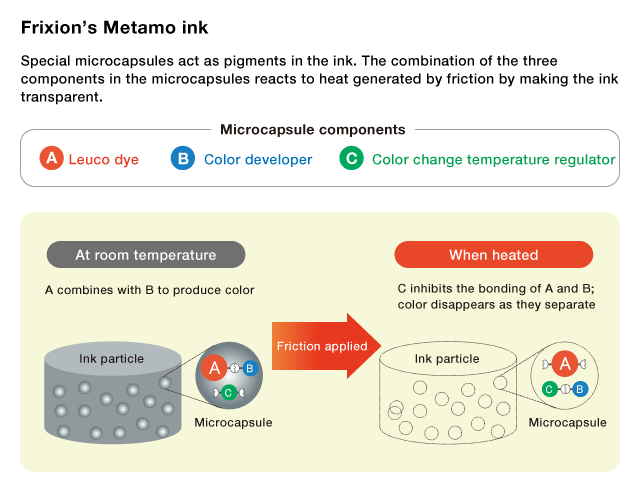 The leuco dye in the ink determines the color, but does not actually produce it until it chemically bonds with the color developer. The color change temperature regulator is what prevents bonding above a certain temperature, making the color disappear. Different regulators allow for color change at different temperatures. 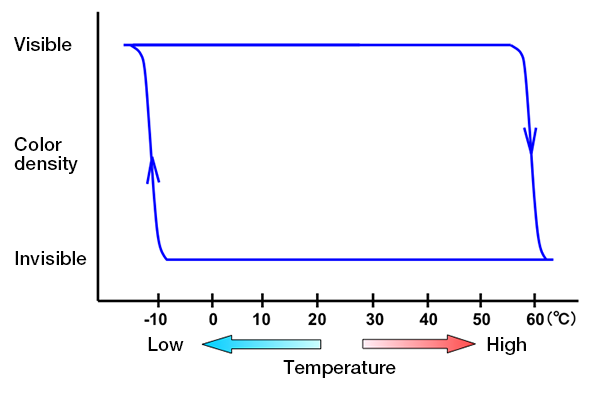 In the early stages of development, the temperature range in which the ink would display its color was fairly narrow, so it had a tendency to disappear and reappear. This sensitivity to minor changes in the surrounding temperature limited its applications; nobody would want to use ink that could easily vanish on its own or return after having been deleted. The researchers needed a wide temperature range to make the pens commercially viable.

In 2005, the company succeeded in developing ink that became invisible at 65°C and would only reappear if cooled to –20°C. This laid the groundwork for Pilot’s pioneering Frixion Ball pen, with its eraser designed to raise the temperature to 65°C through friction. 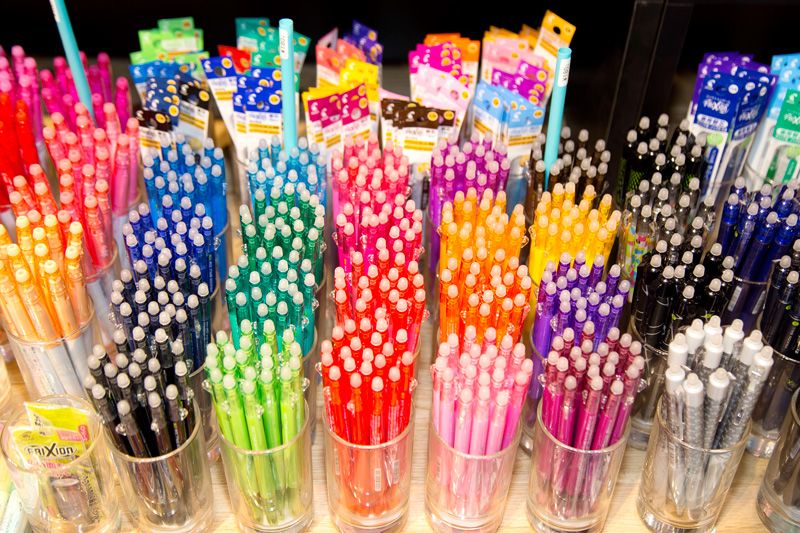 The Frixion Ball series comes in a rainbow of colors.

The spark of inspiration for the Frixion series came when a researcher observed how the leaves changed color overnight one autumn more than 40 years ago. He wanted to recreate the same magical transformation in a beaker. Pilot patented Metamo ink in 1975, shortly after this brainwave, but it was three decades before the company was able to create a pen that put it into use.

Due to the problems with the narrow temperature range of early forms of Metamo ink, early products using it focused more on novelty than practicality. One example was paper cups that would display a flower pattern when filled with a cold drink. However, the company’s research team still dreamed of producing erasable pens. 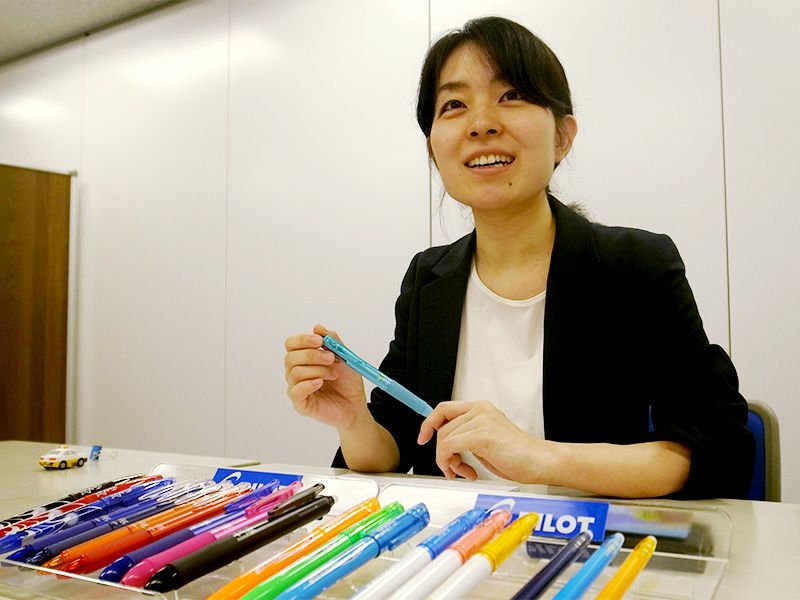 Another obstacle to overcome in creating ballpoint pens was reducing the size of the Metamo ink particles, which were rather large as they included three different components in the microcapsules. It was essential to make them smaller so the ink could smoothly flow from the tip of the pen.

By 2002, Pilot had reduced the particles to a fifth of their original size. At two to three microns in width, they were around 40 times narrower than a human hair. After increasing the temperature range for the ink to between –20°C and 65°C in 2005, the company was ready to put the finishing touches to its Frixion pens and prepare them for launch.

Ninomiya Sayaka of the Pilot sales planning division describes how the popularity of Frixion pens is based on positive word of mouth from customers, as well as the company’s own research and marketing efforts. As she notes, though, the pens do have their limits. The ink may become invisible at high temperatures without being physically erased, while previously erased writing can reappear if the paper is exposed to low temperatures. “I tell customers to consider how they use the pens. In particular, I warn them that they’re not suitable for legal or official documents, names and addresses on letters, or other occasions when it would be a major problem if the ink disappeared.” (Originally written in Japanese by Masuda Miki. Banner photo: Frixion pens on sale in Itōya, Ginza, Tokyo. Photographs and video by Ōtani Kiyohide of Nippon.com)