Economy Science Technology Dec 28, 2011
In a world that runs on integrated circuits, metal plating has assumed a key role in the manufacturing industries. Armed with state-of-the-art plating technology and a can-do attitude, a little company named Mitsuya has left its imprint on manufactured goods all over the world—and beyond. 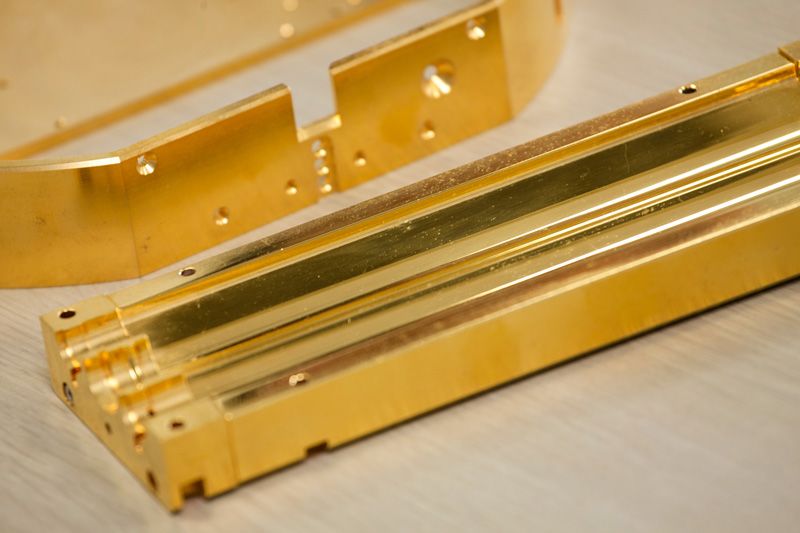 Tourists flock to see the bronze statue of the Great Buddha (daibutsu) at Todaiji, a temple in Nara. The enormous, somber statue is an awe-inspiring sight, but it is just a shadow of the Rushana (Vairocana) Buddha that greeted worshippers back in the middle of the eighth century when the statue was completed. The original daibutsu at the temple was not merely colossal but also dazzling: its surfaces coated entirely in gold. Artisans gilded the huge bronze sculpture by coating it with an amalgam of mercury and gold and then exposing it to heat, which volatized the mercury, leaving only gleaming gold behind.

Today, metal plating is much more than just a way to coat objects with a brilliant ornamental surface. It plays an indispensable role in manufacturing by furnishing products and components with such properties as electrical and corrosion resistance. Leading the way for this pivotal technology has been the small Japanese company Mitsuya, which is developing and commercializing state-of-the-art plating processes that meet the diverse needs of industry.

Today more than 40% of all automobiles sold worldwide contain engine sensors that have passed through Mitsuya's plating process. Until recently, electroless plating was considered the only viable nickel-plating method for the integrated circuit of the airflow sensor, a vital element of the engine's control system.

But the chemicals used in electroless plating make it a costly process. With automakers searching for ways to slash costs, Mitsuya proposed nickel electroplating as a cheaper alternative. Electroplating costs less because the plating solution can be kept stable for long periods of time, facilitating automated batch plating. And even when the solution breaks down, it is easily replenished.

Exhaustive testing is required before any new technology can be adopted for an automotive component. It took a full year to effect the switch to nickel electroplating, but the results far exceeded automakers' expectations. With Mitsuya's new process, plating costs for a component plunged a full 95%, while the defect rate fell from 4% to almost zero. 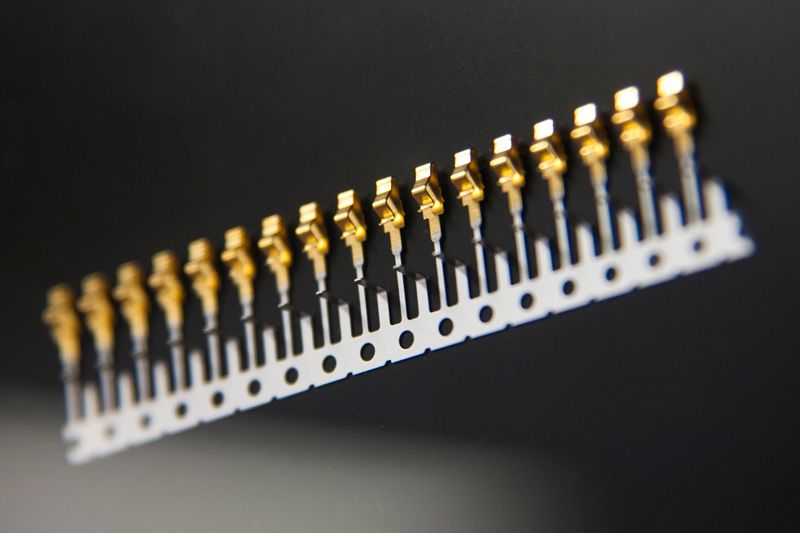 Engine sensor components processed by Mitsuya. The ability to process continuously is one of the key advantages of electroplating.

As a payload specialist aboard the space shuttle Endeavor in 1992, Japanese scientist Mōri Mamoru carried out a cutting-edge experiment in metal alloy formation using an "image furnace." The heart of the furnace was a light-collecting reflector made with the world's most advanced gold-plating process—a technology developed by Mitsuya.

An image furnace concentrates infrared light to melt solids at high temperatures. The key to its performance is how efficiently the concave parabolic reflector can focus the infrared waves on a single spot. By depositing a perfectly uniform, highly reflective layer of gold on the reflector surface, Mitsuya's plating technology boosted the efficiency of reflectivity and light concentration from 87% to 99.8%, helping to ensure the success of the experiment.

Managing Director Ozawa Shigeo. Was named Contemporary Master Craftsman in 2006 in recognition of his engineering achievements, including the development of cutting-edge plating technology.

The reflectivity of a plated surface is affected by subtle differences in the composition of the plating metal. Mitsuya collected vast amounts of data to determine the optimum metallic composition. To date, the company has produced close to 20 precision light-collecting reflectors for use in experiments on Earth and in outer space, all with an optical efficiency of close to 100%. The engineer who pioneered this super high-precision coating technology was Mitsuya Managing Director Ozawa Shigeo.

Mitsuya plating was also used for some of the equipment carried into space by the unmanned Japanese spacecraft Hayabusa. Launched by the Japan Aerospace Exploration Agency in 2003, Hayabusa attracted international interest when it reentered Earth's atmosphere in June 2010, after completing an exploratory mission to a near-Earth asteroid. "We know that one part we processed was used by the spacecraft. But we don't know exactly where or how it was used," Ozawa confesses. Many of the projects that make use of Mitsuya plating technology are so shrouded in secrecy that the company never learns how its components are actually used. 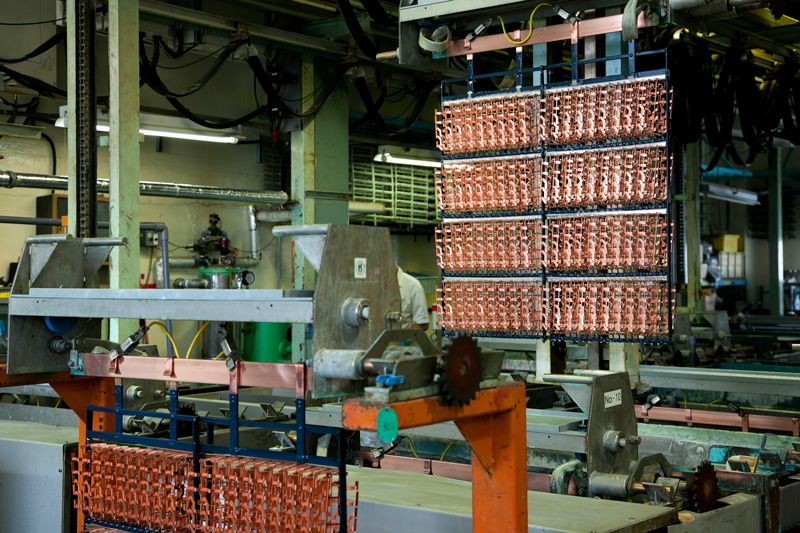 Components to be plated are lined up on a rack for automated batch processing.

One of the strengths on which Mitsuya prides itself is its ability to develop on-demand products and processes. The company is willing to undertake the most demanding technical challenges, mindful of the precepts laid down by its previous CEO: Never turn down a job; never say it can't be done. "I don't claim we comply with every request,” Kusama notes, “but we accept close to 80 percent.” This can-do attitude is not lost on potential customers. As a purchasing manager at a top Japanese electronics manufacturer puts it, "If you're in a bind, take it to Mitsuya." 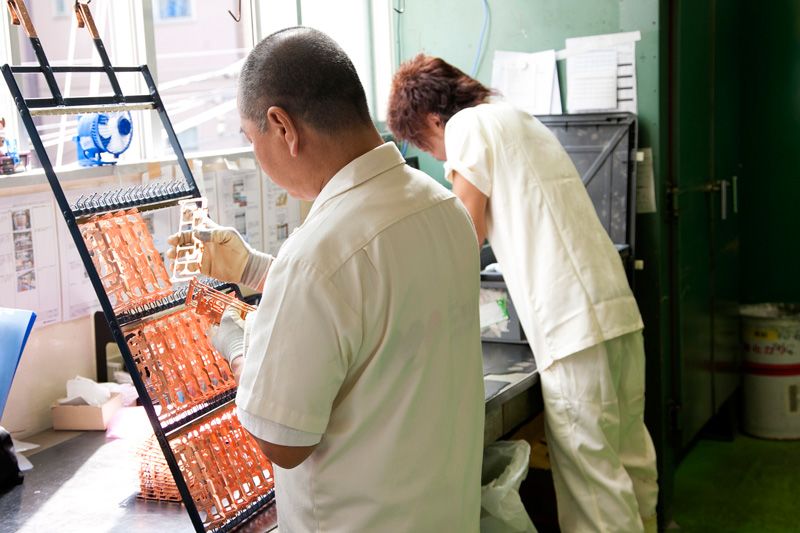 Rapid turnaround is another major focus of the company's management. From this perspective, one key asset is the Gotanda plant, located in the heart of Tokyo. With residential development encroaching on the area, the company had once planned to shut down the Gotanda plant and transfer its operations to the Yonezawa facility in Yamagata Prefecture. But management abandoned the idea in the end, realizing that a convenient central location was essential for maintaining a fast pace during the intensive back-and-forth with customers typical of the design and trial phase.

Some customers show up at Mitsuya in the morning, requesting the finished product by the same evening. "One client even asked us to complete the order while he killed time at a nearby coffee shop," recalls Kusama. Although Mitsuya has additional production facilities in Kōfu in Yamanashi Prefecture and Hachiōji in suburban Tokyo, as well as Yonezawa, it has no intention of abandoning Gotanda, where the business got started.