Economy Science Technology Oct 7, 2013
For more than two centuries the Oigo Seisakusho company has been producing bells for Buddhist temples. Today it accounts for around 70% of all bells made in Japan.

Carrying On the Tradition 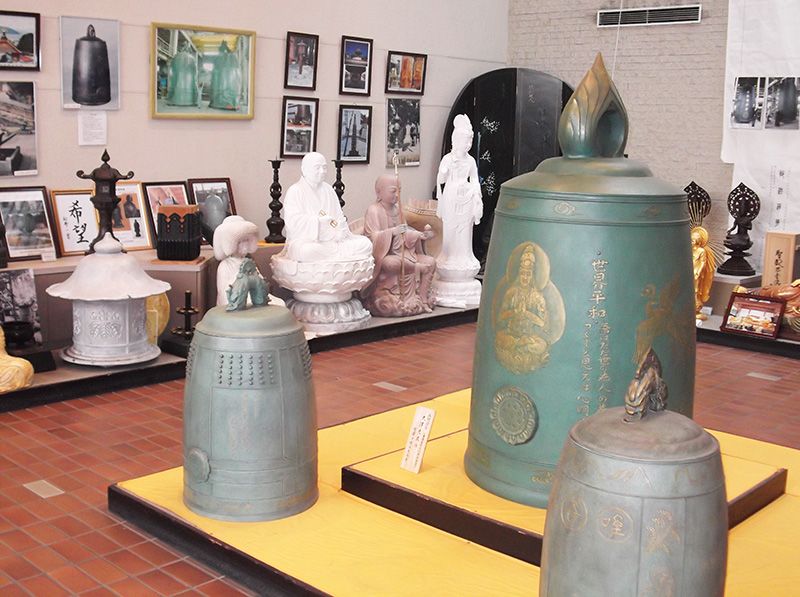 Some of the bells on display at the Oigo Seisakusho entrance hall.

It is a sound that can be heard across Japan—the deep resounding tone of a Buddhist temple bell after it is struck by a long wooden beam.

The sound, which is believed to be an expression of the benevolent force of the Buddha, brings a feeling of peace to people’s hearts. In this sense, the solemn tone contrasts somewhat with the sound of church bells, which call people to prayer and communicate a sense of gratitude, hope, or joy. Along with periodically announcing the time of day throughout the year, temple bells in Japan are struck at the “Joya no Kane” ceremony to mark the beginning of the New Year. The ringing of the bells symbolizes the driving out of evil desires, and the desire to bring in the New Year with a pure heart.

The temple bells may be a symbol of timeless tradition but they are still being produced today. The company best known for its hand-crafted temple bells is located in the city of Takaoka in Toyama Prefecture—a company named Oigo Seisakusho, headed by Oigo Shūhei. The area around Takaoka was a thriving area for the production of copper goods during the Edo Period (1603–1868), with work commissioned by the Kaga feudal domain. This was where the predecessors of the company first began to produce copper bells. 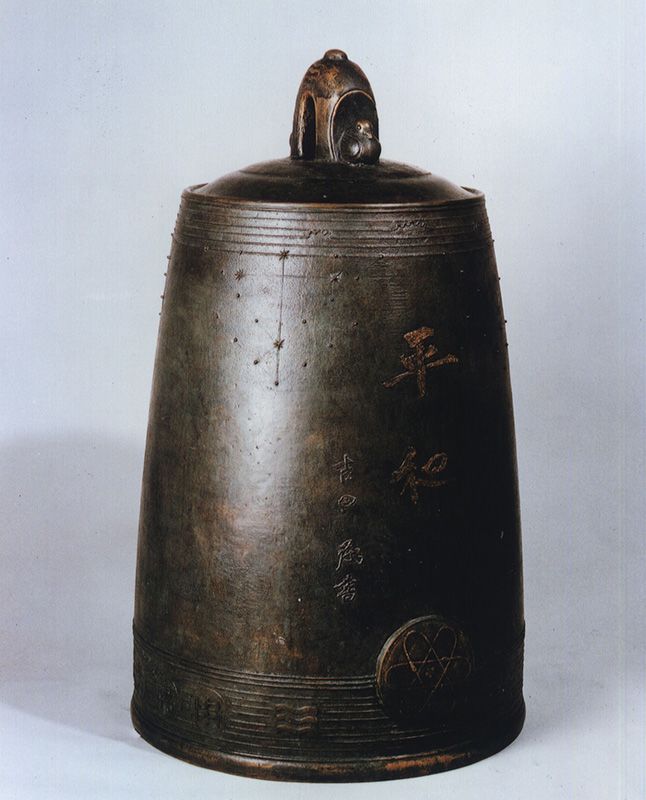 One of the Hiroshima “Peace Bells” (photograph courtesy of Oigo Seisakusho).

The company has provided bells for temples all across Japan, producing a total of around 20,000 bells of all sizes. Remarkably, the company accounts for around 70% of the total domestic market. Some of the oldest and most revered temples are among the company’s clients, including Nishi Hongan-ji and Sanjūsangendō in Kyoto, Naritasan Shinshō-ji in Narita, and Ikegami Honmon-ji in Tokyo. The “Peace Bells” in Hiroshima were also made by Oigo Seisakusho.

The production of temple bells in Japan stretches back to the Asuka period (593–710), when Buddhism first came to Japan. Production peaked in the Edo period. It was during this period that the bells took on the shape and unique tone they have today. Although similar temple bells are found in China and in Korea, the deep and lasting resonance of Japanese bells is something unique. One of the most famous lines in all Japanese literature is the opening of the The Tale of the Heike, which tells of the doomed Taira samurai clan: “The sound of the Gion Shōja bells echoes the impermanence of all things” (translation by Helen Craig McCullough). The sound of the bells has always been intertwined with the Buddhist concept of impermanence.

Motoi Hideharu, the chief director of Oigo Seisakusho, provides more background on the cultural significance of the temple bells:

“Many factors contribute to the sound of a particular bell—its shape, the balance between its parts, the proportion of copper to tin, the temperature at which the metal is cast, the wood used for the beam, and the location of the temple. Japanese temple bells have a distinctive low-frequency resonance. This matches the wabi-sabi aesthetic of so much of Japanese culture. That’s the sound we aim to create in our bells.”

Recently, researchers have found scientific proof for the calming effect of the low frequency of the bells. “It turns out that the resonance of the bells induces a sense of relaxation and well-being in people, like the gurgling of a stream or the sound of birdsong,” Motoi notes. “It’s no accident that the bells can bring comfort to a person’s heart.” 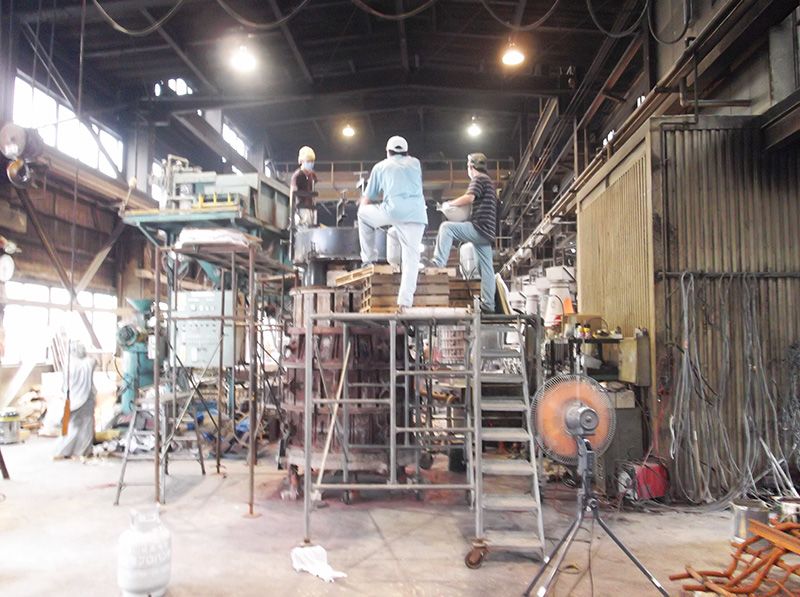 Copper and tin are melted in a gas-fired furnace and poured into a mold to create a bell.

The larger the outer diameter at the opening of a bell, the lower its tone will be. If a bell is too thin there is the risk that it will crack when struck.

The first stage of the production process involves making an earthen mold by mixing sand and clay. A gas-fired furnace is then used to melt copper and tin. The molten metal is then poured into the mold. Once the metal has cooled, the bell is removed from the mold and painted black. This is followed by the finishing process. 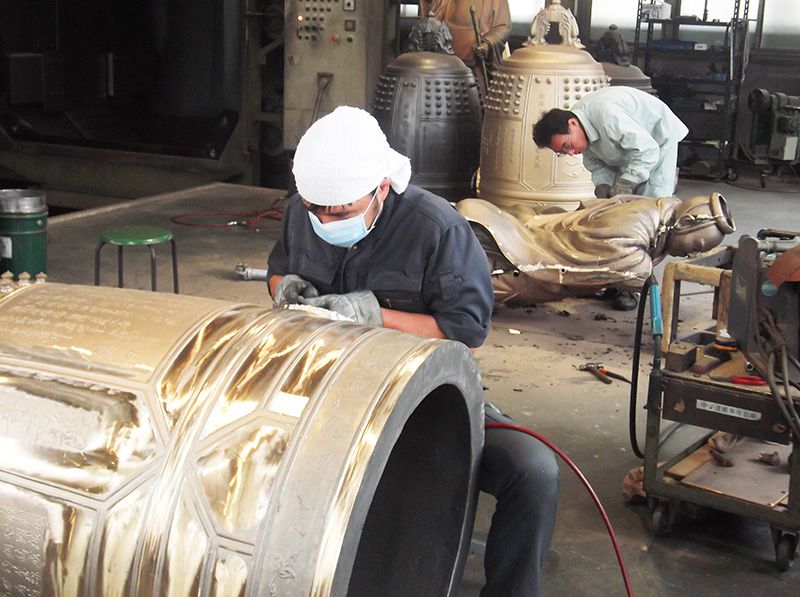 An Oigo Seisakusho employee works on a bell that has been removed from its mold; behind him another employee is working on a statue.

Each bell is unique. Iin order to create a particular resonance and sound, the craftsmen follow a production method handed down since the Nara period (710–794). The painstaking attention to detail throughout the process means that it takes at least three or four months to create a bell. Oigo Seisakusho sometimes receives orders for extremely large bells. These have included the bell made for the Fagu Shan temple in Taipei—the biggest bell in all of Taiwan, weighing 25 tons. The company also supplied a temple in Hyōgo Prefecture with a 48-ton bell, the largest in Japan. The ability to produce such mammoth bells sets Oigo Seisakusho apart from its competitors.

The 25-ton bell provided for a temple in Taipei (left); the 48-ton bell delivered to a temple in Hyōgo Prefecture (photographs courtesy of Oigo Seisakusho).

During World War II, many of the temples in Japan were stripped of their bells, which were melted down to create weapons. This led to a huge spike in demand for bells once the war ended. Just 50 years later, the number of temple bells in Japan was back to the same level as in the nineteenth century. The postwar period was an unprecedented time for bell production.

In the years after the war, Oigo Seisakusho was one of the first to introduce machinery into the production process. This enabled the company to create standardized bells, drawing on the rich experience of its craftsmen. This shift away from small-scale manufacturing allowed the company to meet demand and expand its market share.

But metal bells will always be a niche market, and the industry is a tough one. In recent years, two of Oigo’s competitors have been forced to close. There are now only five companies left in production in Japan. Demand has begun to taper off. Whereas Oigo Seisakusho once received orders for around 200 bells a year, today that figure is down to around 40.

Motoi says that the average bell sells for around the price of an upscale automobile (roughly ¥4 to ¥5 million). But unlike a car, a bell can last a thousand years. The oldest temple bell still in use in Japan, at the Myōshin-ji temple in Kyoto, is thought to be around 1,300 years old.

The company’s annual sales are between ¥400 and ¥500 million, with bell production accounting for around a third of those sales. The company also produces and sells statues  and other votive objects and monuments. These additional products help bolster the company’s bottom line.

Despite the recent fall, the demand for bells is still considerable. Whenever a temple undergoes renovations or the head priest is replaced, it is customary to replace the bell and belfry.

“In a way, every one of the bells we have produced all around Japan is a sort of product sample,” Motoi says. “Clients often come to us after hearing one of the bells we’ve produced.” Word-of-mouth is also important. Some people come across the company via an Internet search.

The company also has a perhaps surprising number of overseas clients. In summer 2013, a group of people from Taiwan visited the company to negotiate the purchase of a bell. Orders like this are on the rise now that the yen is depreciating against other currencies under “Abenomics,” making it a relative bargain for overseas clients to purchase a bell made in Japan. Although the company has not made any particular effort to expand its business overseas, it has already provided bells for clients in China, Brazil, Australia, New Zealand, and other countries.

Following the Tōhoku earthquake of March 2011, Oigo Seisakusho received an order from a civic organization in Kamaishi—a city in Iwate Prefecture that was devastated by the disaster—for a “Reconstruction Bell” to symbolize the community’s determination to rebuild. The bell also serves to preserve the memory of the disaster and those who lost their lives. The bell is the same size as the Peace Bell in Hiroshima, and now has pride of place in front of Kamaishi’s train station. In March 2013, the company also completed the “Requiem Bell of Love” for the coastal area of Ōfunato in Iwate Prefecture, another city heavily damaged by the tsunami. The bell is struck every day at 2:46 p.m. to mark the moment when the earthquake hit.

The “Reconstruction Bell” in Kamaishi (left) and the “Requiem Bell of Love” in Ōfunato (both photographs courtesy of Oigo Seisakusho).

Motoi has been involved in producing bells for many years, but says it is still a thrill each time a client hears a bell struck for the first time. In the years to come, the company will continue to work to build a new future for temple bells, while holding fast to the traditions held dear by generations of craftsmen.