Dassai: How a Rural Sake Brewery Took On the World

Economy Jan 16, 2014
Thirty minutes by car from Iwakuni, deep in the mountains of Yamaguchi Prefecture, is the home of Dassai, a top-quality sake that has been highly acclaimed both at home and abroad. We take a look at how this small brewery rose from unpromising beginnings to become a major player on the international market.

Success in a Declining Industry

Sales and consumption of sake, traditionally regarded as Japan’s national drink, have been in decline for some time. From a peak of 1.675 million kiloliters in 1975, consumption had dropped to just 589,000 kL in 2010. Part of this decline can be attributed to the tendency among younger people to drink less, together with increased sales of alternatives like beer, whisky, and wine. Over this period, the number of sake breweries fell from more than 3,000 to around 1,500. 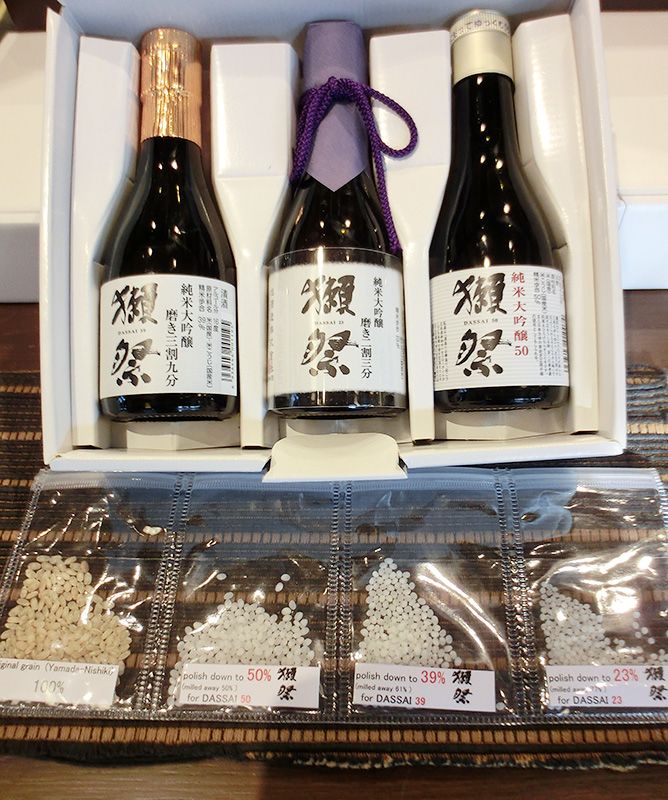 But it’s not all gloom and doom. One sake brewery is enjoying great success. That brewery is Asahi Shuzō, located outside the city of Iwakuni in Yamaguchi prefecture, with Sakurai Hiroshi as president. Asahi Shuzō jettisoned its ordinary sake, Asahi Fuji, which had a history going back more than 200 years, and after a tough struggle, the brewery came up with a junmai daiginjō-shu (pure-rice top-quality sake) called Dassai, launching it in Tokyo in 1990. In 1992, Asahi Shuzō developed Migaki Niwari Sanbu, which has since risen to become its showcase product, and the brewery began its push for market share in earnest.

When Sakurai took over the business from his father in 1984 at the age of 34, the brewery had an annual production of 126 kL (equivalent to 70,000 bottles of 1.8 liter capacity), and sales were ¥97 million for the brewery’s fiscal year ending in September. The business was virtually bankrupt and on the verge of going under. 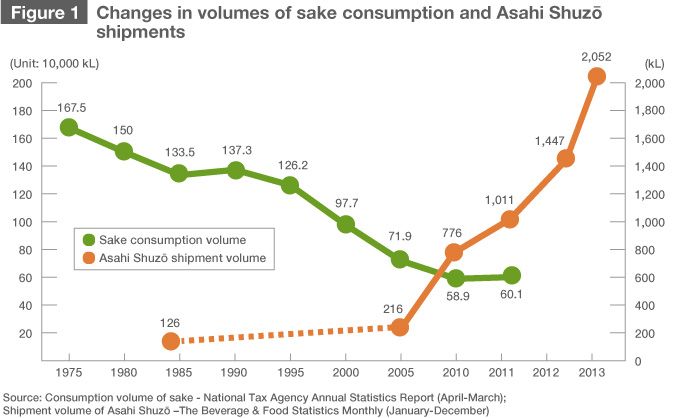 Niwari Sanbu: Born Out of Struggle

Although he learned something about sales after working for a major sake manufacturer in Kobe for three and a half years following his graduation from university, Sakurai was still a complete amateur when it came to brewing. After struggling to find a new direction, he decided to focus on brewing ginjō-shu (high-quality sake). Until then, Asahi Shuzō had been trying to sell ordinary sake locally but had not been successful. In trying to figure out why, Sakurai realized that what consumers wanted was high-quality sake with a taste they could truly savor. Sakurai decided that his brewery needed to improve the quality of the sake they produced. That sake was daiginjō-shu (top-quality sake). 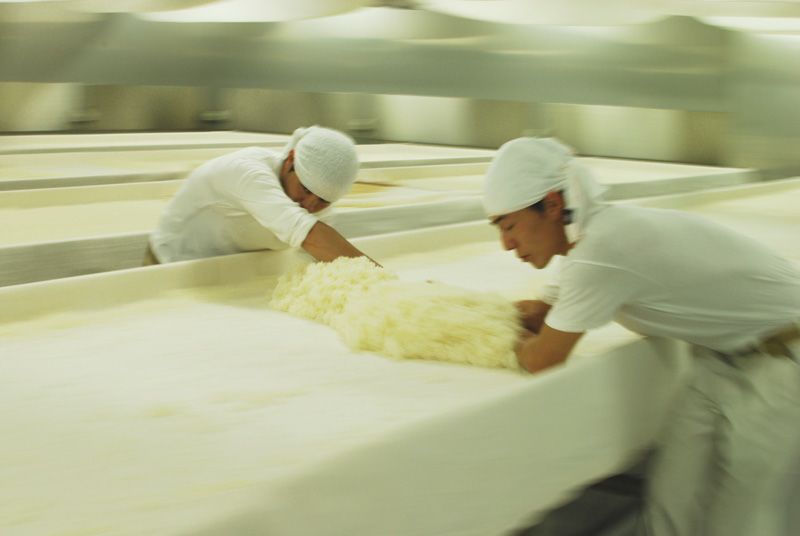 Kōji mold is sprinkled onto steamed rice and the rice is then mixed by hand to ensure an even growth of the mold. (Courtesy of Asahi Shuzō) 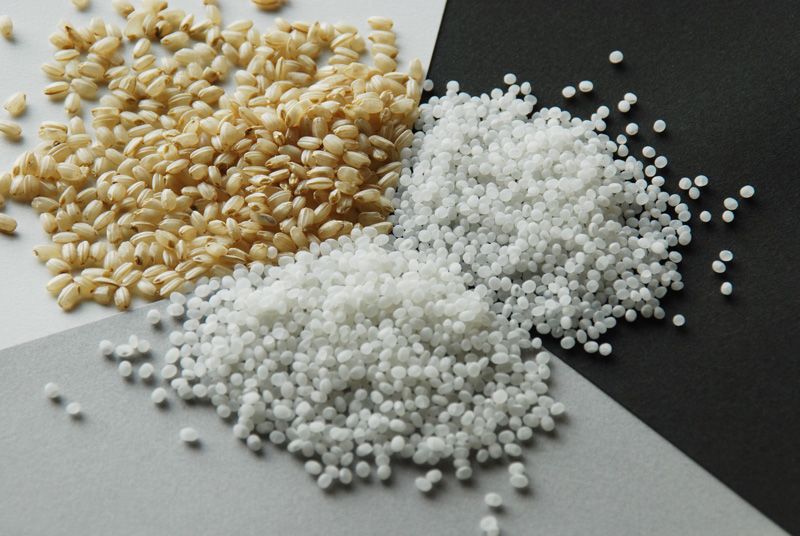 Yamada-nishiki brown rice grains are milled down to 23% of their original size. (Courtesy of Asahi Shuzō)

Extra care needs to be taken to produce the ginjō-shu type of sake. More than 40% of each grain of rice is milled, leaving less than 60% of the inner white core. Using rice processed this way, fermentation is carried out at a low temperature (5-10 degrees) over a long period of time (more than 30 days). Naturally, this drives up the price. Ginjō-shu also requires much higher levels of brewing expertise than ordinary sake. With daiginjō-shu, more than 50% of the rice grain is milled away. For Asahi Shuzō, this new venture was their first experience with ginjō-shu, and daiginjō-shu seemed beyond their wildest dreams. For the rice, Asahi Shuzō used only Yamada-nishiki, the top brand of rice suited to brewing sake. Until 1990, when Dassai made its appearance, failure followed failure as Asahi Shuzō continued in its quest to brew ginjō-shu.

Sake to Be Savored

The catalyst for Asahi Shuzō’s breakthrough was its success in finding a new market in Tokyo. Sakurai went door-to-door to retailers and restaurants asking them to carry his brewery’s sake. The reputation of Yamaguchi prefecture’s sake breweries was extremely poor, recalls Sakurai. “People were skeptical about whether it was possible to make good sake west of Hiroshima. Nearly all of the breweries in Yamaguchi are small compared to breweries in Hiroshima Prefecture. Nearly all the sake brewed in Yamaguchi is consumed locally. It wasn’t easy to convince people to stock a sake from Yamaguchi,” he said.

Many breweries are content to subsist on local sales and do not bother to venture as far as Tokyo. Sakurai says, “I didn’t know whether we would make it. But one thing was clear—I knew we absolutely had to make a go of it in Tokyo. There was no way we could survive by staying local.”

Left: The shop before it was pulled down and the new brewery. Right: A conceptual drawing of the main brewery after its planned completion. (Courtesy of Asahi Shuzō)

Asahi Shuzō’s breakthrough into the Tokyo market around 1990 coincided with the height of the bubble economy. When the bubble burst halfway through the decade, izakayas (Japanese-style pubs) began popping up in Ginza and other exclusive areas to replace more expensive bars and clubs that had closed down. Befitting their ritzy locale, many of these Ginza izakayas began to carry more expensive types of sake than conventional pubs. “That’s how we managed to gain new customers for our product.”

“Everyone is looking for something different in sake. Milling Yamada-nishiki as much as 77% creates a daiginjō-shu with a good aroma and a sweet, fruity, and silky smooth flavor. But conventional sake enthusiasts have complained that it’s too easy-drinking. Other people like daiginjō-shu for its pleasant aftertaste. It doesn’t have that smell of rice bran you get with some cheaper kinds of sake.”

Sakurai values quality over quantity. He points out that the social role of sake has changed with time. What people are looking for today is not a cheap intoxicant but a quality product that can be savored for its taste. Sakurai says his key target market is not long-term drinkers but those who may be new to the pleasures of sake. “We are targeting the younger generation, who drink far less than their parents’ generation. Women are another major untapped market,” he says. 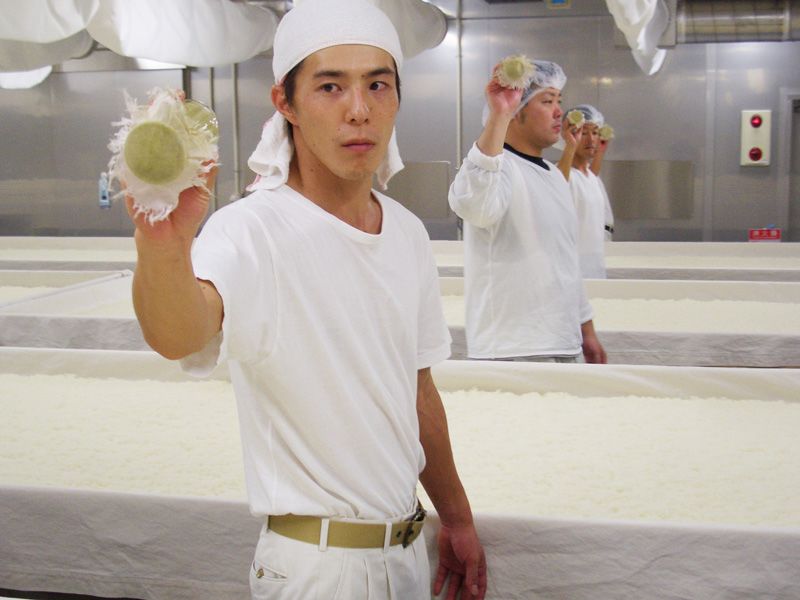 The higher costs of daiginjō-shu mean it is unlikely to ever become an everyday tipple for most consumers. From a marketing perspective, Asahi Shuzō’s decision to concentrate solely on daiginjō-shu is more likely to prove an audacious exception than the general rule. Milling the rice takes time. Milling down to 50% takes 30 hours; milling to 23% takes 96 hours, or four whole days.

But the company had no choice. Sakurai says they approached the challenge of making daiginjō-shu together with the master brewer, or tōji. “However, the result was somewhat strange and could not be called daiginjō-shu. So I compiled what I could about techniques for brewing ginjō-shu and established a production system for the master brewer to implement it,” said Sakurai. From that, Migaki Niwari Sanbu was born, the sake that boasts the highest milling rate in Japan.

Sake brewing is carried out by the master brewer and the team of workers below him. Brewing is usually limited to winter, so most of the workers are farmers or others from regions with heavy snowfall looking for work during the farming off-season. Normally the master brewer shoulders all the responsibility for brewing. Brewery proprietors concentrate on selling the sake brewed under this division of labor system. 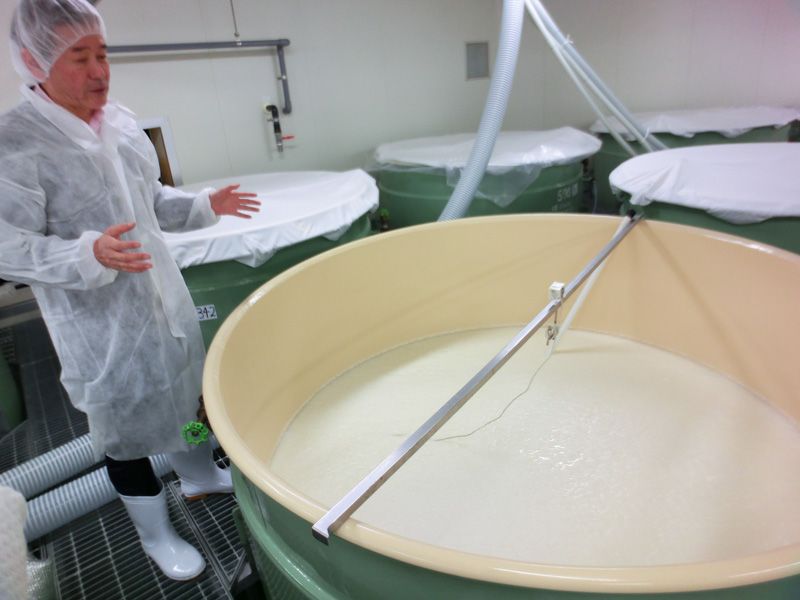 Stainless steel tanks are used for fermenting the steamed rice.

In 1998, Asahi Shuzō’s master brewer announced that he did not want to make sake anymore. Sakurai had tried brewing beer and had opened a restaurant but this new business venture had flopped. Rumor had it that the brewery was in deep financial trouble. A few days later, Sakurai decided that the company would brew the sake itself, without the help of a tōji.

“The tōji we were working with wasn’t producing the sake that I wanted as the manager of the brewery. He would come in winter and brew up a batch of sake and then go home when spring came, leaving me to sell the sake as best I could. If I had any worries about the suitability of the year’s rice harvest to the approach he was suggesting, or even if the sake he brewed turned out to be not very good, by the time I realized what was going on, it was too late. Quality was a major issue. So I thought we’d be better off making it ourselves,” Sakurai said.

“It was highly significant for us to take on the challenge of brewing sake without making any compromises. Also we were able to embark on shiki-jōzō, or four-season brewing, as opposed to before when we only brewed sake during winter. This enabled us to strengthen our production capacity. We could now respond to customer orders on a real-time basis, and we put a system in place for dealing directly with quality control.”

With competition in Tokyo certain to heat up, the company’s top priority now is to develop an international market for its product. “One of the things that makes us unique is that we have not targeted existing sake drinkers. This helped us to avoid getting tangled up in competition within the industry in Japan. From now on, our only choice is to develop our market outside Japan,” Sakurai says, comparing his situation to that of French wine makers who have developed expensive lines for overseas markets. 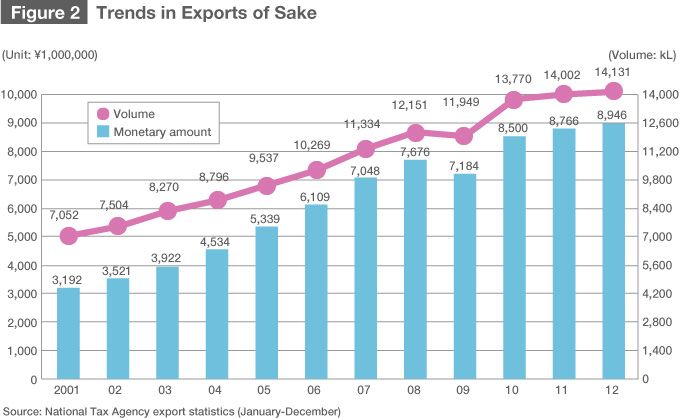 Asahi Shuzō’s first overseas venture was in 2002, when the company’s products went on sale in Taiwan. Distribution to the United States came the following year. The recent popularity of Japanese cuisine has seen increasing numbers of fashionable Japanese restaurants opening in New York. “People are reluctant to spend a lot of money on something they have not tried before. So the best way to win new customers is to introduce them to sake in restaurants. Recently, wineshops are starting to stock Asahi Shuzō sake too.”

Asahi Shuzō’s sake is now available in 18 countries worldwide, including Dubai, Hong Kong, Britiain, and France. Sales outside of Japan account for approximately 10% of the brewery’s turnover. The most important market after the United States is France. “France has a very strong influence on the States as far as food is concerned. If we can’t sell well in France, it will be difficult to sell in the States too,” said Sakurai.

This was the reason Asahi Shuzō brewery decided to take the bold step of opening an exclusive outlet in France. On March 23 this year, the brewery’s first overseas shop will open in Paris. The outlet will be modeled on the Dassai Bar 23 that opened last May in Kyōbashi, Tokyo. This is a directly managed store that combines a bar and a shop. “Unless we can sell globally, there is no future for sake.” In line with this principle, Asahi Shuzō brewery is aiming to increase overseas sales to 50% of total sales.

According to statistics on exports from the National Tax Agency, the export volume of sake for 2012 was 14,131 kL (¥8.946 billion). Exports have reached a new record for three years running. With traditional Japanese cuisine designated as an Intangible Cultural Heritage by UNESCO earlier this year, the popularity of Japanese food and drink seems set to go from strength to strength.

The area of Osogoe where the Dassai brewery is located is a typically underpopulated rural area where the local elementary school has a total of just nine students. When the new brewery begins its operations in May 2015, it will be capable of turning out 9,000 kL, or 5 million bottles, a year. No longer will it be a small sake brewery tucked away in the mountains of Yamaguchi. Asahi Shuzō brewery will be reborn as a major player in the fast-developing global market for high-quality Japanese sake.