Economy Lifestyle Dec 25, 2014
All you need is hot water and a few seconds to turn a compact block of freeze-dried food into a savory dish of stew, curry, or risotto. The Japanese company Amano Foods has been at the forefront of freeze-drying technology. We visited the company to learn more about the products it is developing.

“Instant” Is No Exaggeration

Freeze-drying technology was originally developed for the production of medicine and is probably best-known among consumers for its use in instant coffee. But the concept of selling individual, freeze-dried blocks of food, from which a full meal can be quickly and easily prepared simply by adding hot water, has been taken farther in Japan than it has overseas, where freeze-dried products appear most often in the form of lightweight meals for camping.

Before rehydration, each block weighs no more than a few dozen grams. Unlike some other methods of dehydration, the freeze-drying process does not involve excessive heating, so ingredients retain their color, flavor, aroma, and nutritional value. The color and texture of vegetables prepared in this manner can sometimes make it hard to believe you are eating an instant meal.

It is now some years since freeze-dried foods first started filtering slowly into the Japanese market. But since the introduction in 2013 of new products by a number of well-known makers, as well as the appearance of private-label items on the shelves of several major convenience stores, the demand for freeze-dried foodstuffs has increased considerably.

Hiroshima-based Amano Foods is not a large company, but thanks to its experience of freeze-drying intricate combinations of wildly differing ingredients, it is currently involved in the production of over 200 products, boasting of a roughly 65% share of the block miso soup market.

See for yourself what all the fuss is about freeze-dried food by taking a look at the video below, which shows just how easy it is to prepare beef stew.

Products for the General Consumer

Amano Foods initially started out as a dye manufacturer, but in 1947––shortly after the end of World War II––the company started to make caramel, widely used at the time as both a colorant and a flavoring of processed food. In 1957, Amano succeeded in the creation of powdered caramel, and soon afterwards the company shifted its focus entirely to using its dehydration techniques to produce soup for instant noodles and other such food products.

Amano’s first attempts at freeze-drying came in 1968, as part of a project in conjunction with the major brand Nissin to develop instant cup noodles—a product that would soon achieve global popularity. The company specialized in the preparation of cup noodle ingredients like shrimp, squid, and roast pork, and from the outset hoped not only to supply such ingredients for large manufacturers but also to create its own products aimed at the general consumer.

The first block-type miso soup was created by Amano in 1982. One manager recalls: “The blocks were initially developed as a souvenir for visitors to the factory, but they soon gained a following because they were so tasty.” This popularity led to the full launch as a product in 1983, and the potential reach was maximized by an emphasis on mail-order sales.

Amano’s combination of technical innovation and growth potential later attracted a buyout by the giant food and beverage conglomerate Asahi Group Holdings, which made the smaller company its subsidiary in 2008.

The ideal conditions for freezing and dehydration vary from item to item. As a result, great expertise is required to regulate the rate at which the pressure within the freeze-dryer is brought down to zero and to manage the timing of the return to room temperature. Such fine calibration becomes particularly taxing when dealing with products in which a variety of ingredients need to be prepared together. Such a task would be quite impossible without extensive data and experience. This technical prowess is one of the Amano Foods hallmarks.

Year by year, the company has continued to add to its arsenal of freeze-drying machines, and currently operates 19 in total. The largest individual unit is a mammoth 24 meters long and 2.5 meters in diameter, roughly the same dimensions as a railway carriage. As each drying cycle in this machine takes around 24 hours to complete, the process is conducted using sensors to continually monitor the temperature of the ingredients within. 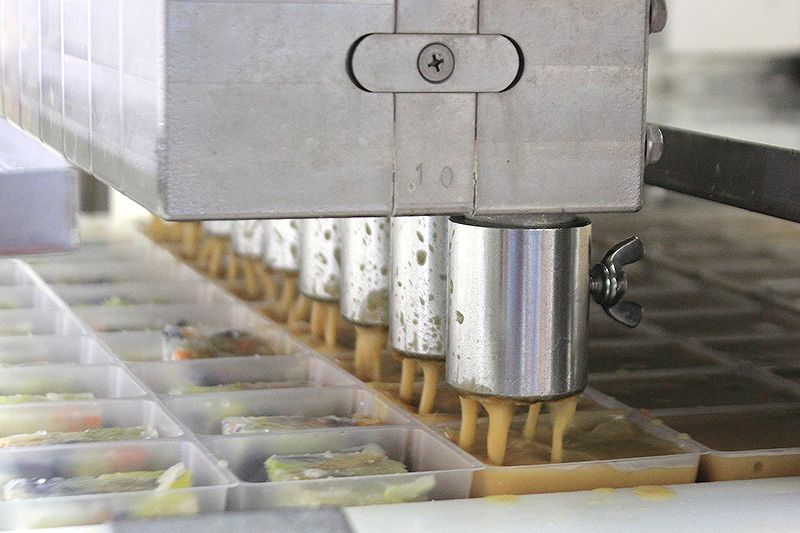 Ingredients for miso soup are slowly frozen prior to the dehydration process, which is the final step. 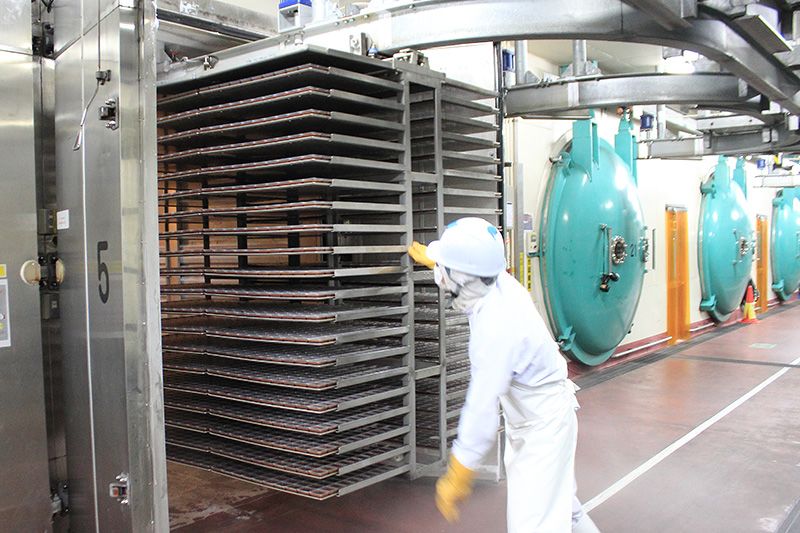 When ready, the finished products are returned once more to a large freezer unit. The light blue objects in the background are freeze-drying chambers. 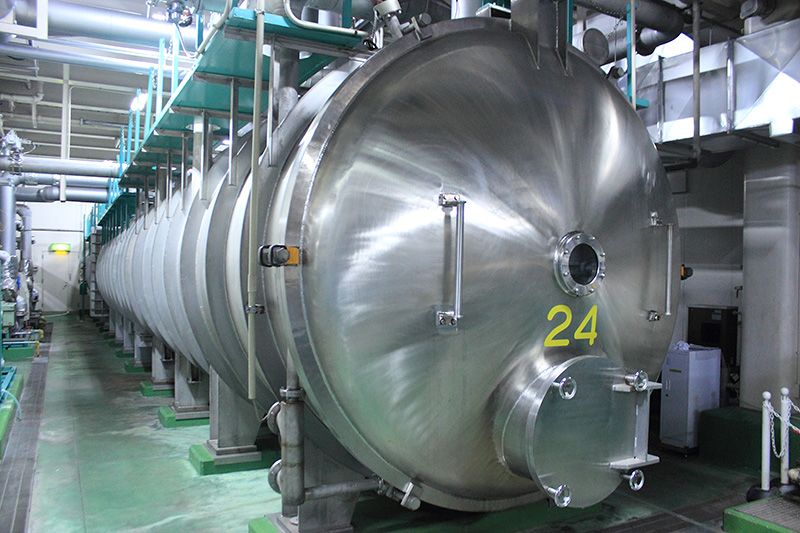 The freeze-drying machine is roughly the same size as a railway carriage. 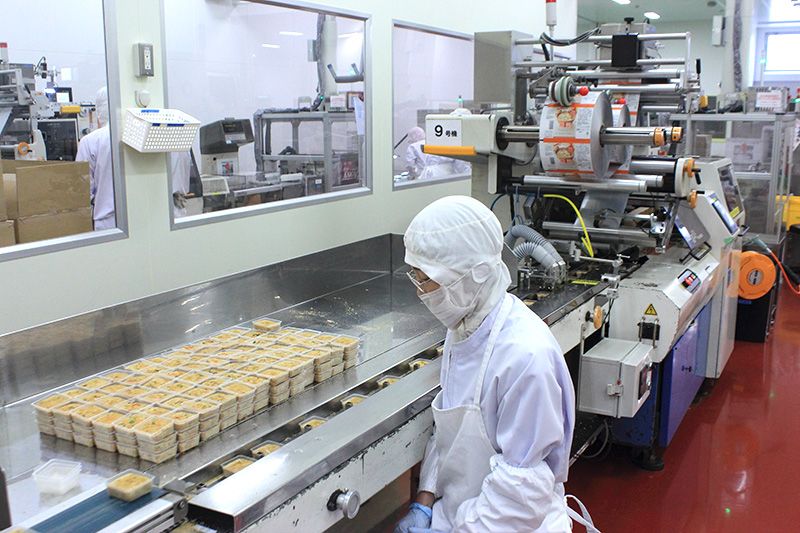 The freeze-drying process complete, the finished products are packaged.

The head of Amano’s research and development, Watanabe Naoto, underscores the importance of returning all of the ingredients to their original condition within around 10 seconds of adding hot water. “To achieve this,” he explains, “we take great care in the preparation of each ingredient, even prior to the initial freezing process. In terms of quality, we want to keep on setting the benchmark by which all companies in our industry are judged.”

Because packaged freeze-dried meals weigh so little, early customers doubted the potential of products that seemed so insubstantial. Some also commented on the similarity to space food. In addition, these products were relatively expensive compared to instant foods prepared by other means. Amano responded by focusing on elderly consumers––who are generally more particular about the quality of their meals––with a particular focus on mail-order sales. 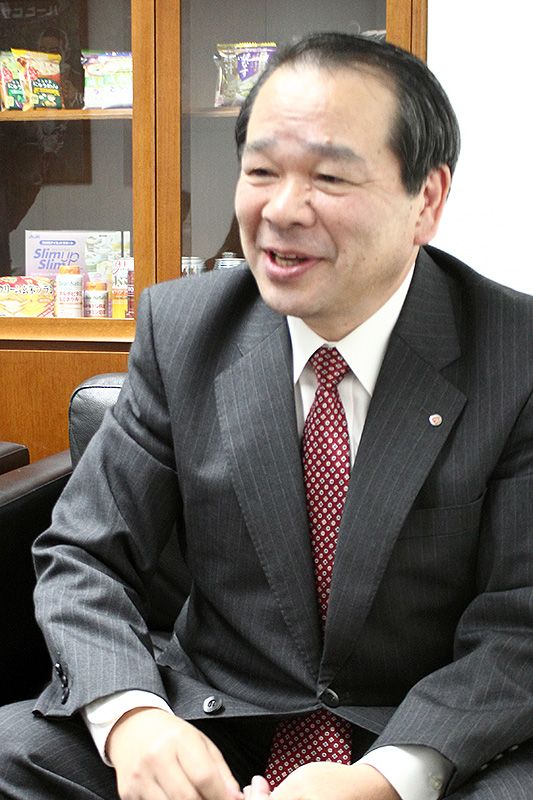 But after Amano opened its flagship “antenna shop” near Tokyo Station in March 2013, the company's freeze-dried creations gained popularity among office workers, both as an alternative for the time-consuming preparation of bentō (boxed lunch) and as convenient instant dishes when working overtime. This success reminded the company that there are always new markets to be developed.

Since the March 2011 Great East Japan Earthquake, freeze-dried meals have attracted particular attention as an emergency food to be used in the wake of disasters. “Because these foodstuffs can ensure that a hot meal is always readily available,” notes Kanemitsu Hiromi, the president of Amano Foods, “we feel that there will be a lot of demand for our products as food to be stockpiled. Recently, we’ve created products that can be stored for as long as five years. Moving forward, we’re keen to continue developing practical applications of our freeze-dried technology to meet the needs of consumers and society as a whole.”