Kyoto’s “Nippon to Asobō” Event Blends the Old and New

Culture Dec 10, 2013
Every year since 1994 Kyoto has played host to “Nippon to Asobō”—an event that showcases the city’s traditional culture and cuisine. The venues include some of the ancient capital’s most historic temples and shrines. We talked to the co-organizer of the event, Yahata Satoko, to find out more.

Every autumn a unique event takes place in Kyoto. The historic shrines and temples scattered around the city become the site of cocktail parties and performances of dance and music, followed by an exclusive dinner held at a teahouse in the Gion district, home to Kyoto’s famous geisha houses. These are some of the festivities for an annual event called Nippon to Asobō (something like “Having Fun with Traditional Japan”). 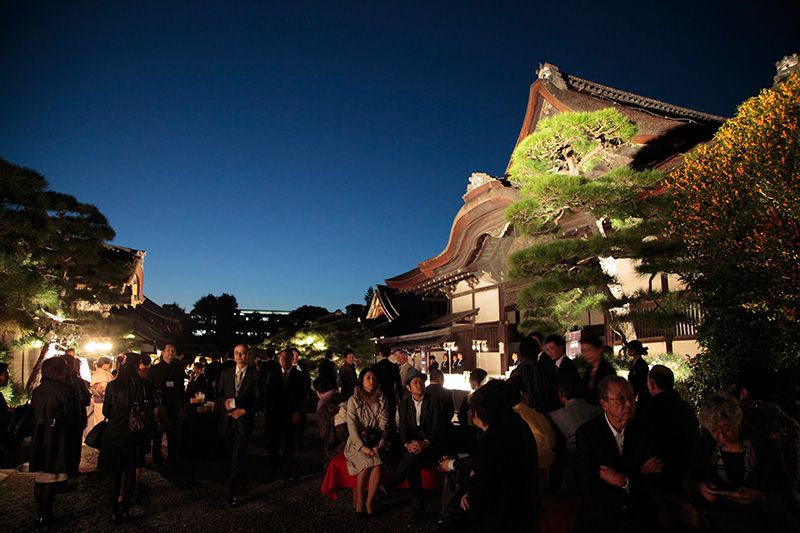 The event dates back to 1994, when it was held to mark the 1,200-year anniversary of the founding of a new capital in Heian-kyō (Kyoto’s former name). Yahata Satoko, the co-organizer of the event, explains more about the aim of Nippon to Asobō, which celebrated its twentieth anniversary in 2013:

“Twenty years ago, I think a lot of Japanese people tended to be rather obsessed with the culture of the West. We wanted to come up with an event that would remind them that there are many things worth knowing about their own culture.”

Over the years, the Nippon to Asobō receptions and performances have been held in famous historical spots around Kyoto, including many listed as Important Cultural Properties and National Treasures, and several World Heritage Sites, including Nijō Castle, Tō-ji, Ninna-ji, and Byōdō-in temples, and Shimogamo and Kamigamo shrines.

“Holding performances in such historic spaces, including World Heritage Sites, not only creates a special atmosphere for people attending; it also makes a wonderful experience for the performers,” Yahata says. “This special atmosphere has persuaded leading artists from around the world to come to Kyoto to perform.”

For Nippon to Asobō in 2012, an invitation-only gala was held in late October at a registered World Heritage Site, Nishi-Hongan-ji temple. 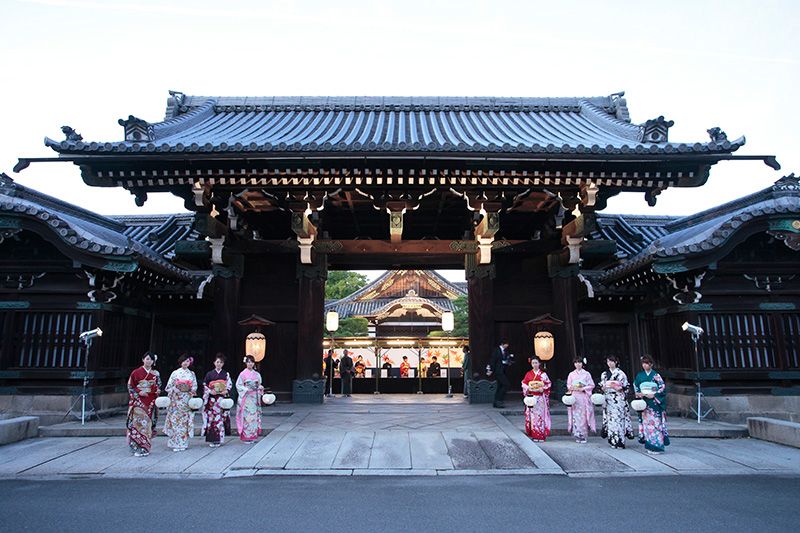 The invitation dinner held at Nishi-Hongan-ji in October 2012.

The gathering at Nishi-Hongan-ji was held near the back of the temple grounds. Visible under the soft glow of lantern light were women dressed in elegant kimonos and the beaming faces of the invited guests. Many people attend the event every year. Near the beautifully lit-up gate, itself is a National Treasure, a luxury autombile was on display, provided by the event’s sponsor. The guests on hand sipped champagne as they chatted and soaked up the atmosphere.

A luxury automobile parked outside of Nishi-Hongan-ji for the Nippon to Asobō event. 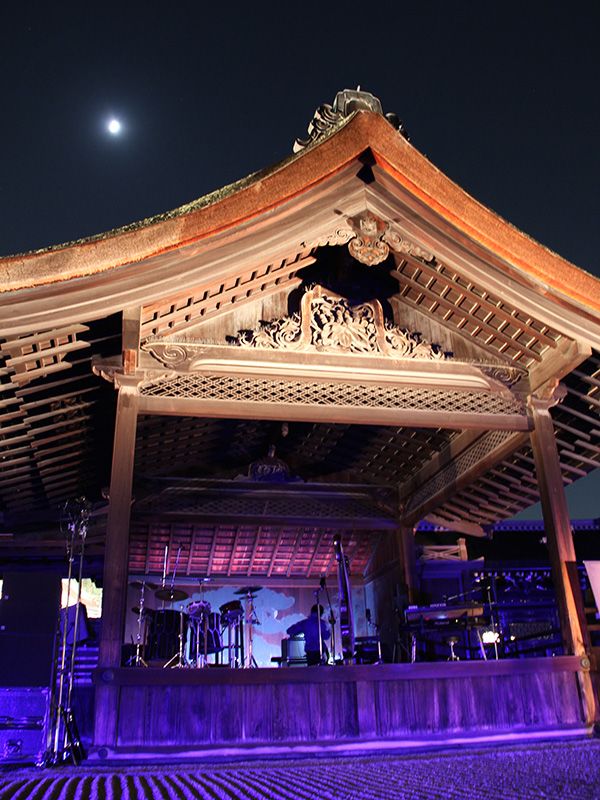 The Southern Noh Stage at Nishi-Hongan-ji, one of Japan’s Important Cultural Properties.

After drinks, guests were ushered into a spacious reception hall—yet another National Treasure of Japan. There they sat down to watch a performance on the Southern Noh Stage. Built in the seventeenth century, the stage is the largest surviving example of its kind in Japan, registered as an Important Cultural Property. Normally, the stage and reception hall are closed to the public.

The stage lighting added a fantastical mood to the evening’s peformance, which brought together musicians from both Japan and China. The Chinese performers entertained the audience with music played on the guqin stringed instrument and the konghou harp—two classical Chinese musical instruments. The konghou, in particular, is thought to be the world’s oldest musical instrument; it was reconstructed based on fragments excavated from archeological sites. This is an extremely rare opportunity to hear a performance on this ancient instrument. For the musical finale, all the musicians joined in on a tune that combined taiko drums and synthesizers.

Following the performance, the invited guests moved on to a teahouse in the Gion Kōbu section of Kyoto. The banquet served at this second event offered the guests a chance to experience the cordial atmosphere of Kyoto’s Hanamichi districts, savoring an autumn evening replete with fine food and drink and the singing and dancing of Kyoto geisha. 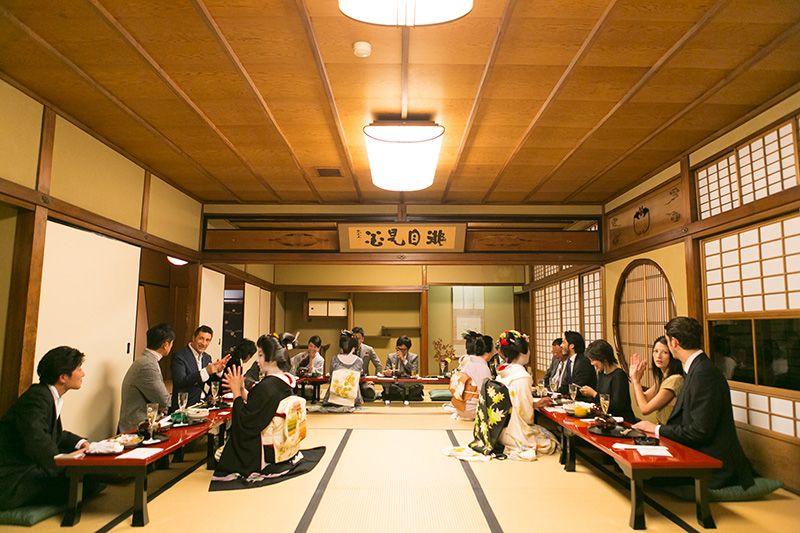 “Bringing together talented artists from Japan and overseas to perform at such historic venues has generated all sorts of wonderful surprises. At one point, a rainstorm suddenly broke out, but the artists who had traveled to Japan for the event never missed a beat and continued to sing their hearts out. That sort of spontaneity has been one of the trademarks of our annual event. Every year we look forward to undertaking a new challenge. And I get a real sense that over the past two decades Japanese people are becoming more and more interested in rediscovering the beauty of their own country. I also think that we have managed to come up with a unique sort of cultural exchange that brings Japan and other countries closer together. Now that the event has reached the milestone of its twentieth year, I think it’s time to bring this chapter to an end. But, starting next year, I’d like to come up with a way for us to showcase Japanese culture in a new format. This endeavor has become my life’s work.”

The grand finale of Nippon to Asobō was held on December 3 and 4 at Kyoto’s Gion Kōbu Kaburen-jō theater, bringing its two-decade history to an end.

(Originally written in Japanese; photographs courtesy of the Nippon to Asobō Executive Committee.)