The Road to Hit Products by Kitamura Mori

Economy Lifestyle Apr 3, 2013
Among the various convenience store chains that have started to sell packages of chilled sushi, one in particular stands out for the quality of its product. What is the story behind its achievement?

One Company Stands Out from the Pack

Convenience stores in Japan have been selling bentō, or box meals, for years, but it was only last year (2012) or so that they started featuring sushi among their offerings. Many customers may have been taken aback to see packages of sushi, much of it made with raw fish, on the shelves of konbini. Most people think of sushi as a food prepared by a chef standing behind a restaurant counter and eaten promptly on the spot. What does it taste like when it has been produced somewhere else and trucked to a convenience store?

I compared the offerings of the four leading konbini chains together with a food critic who specializes in sushi and has written a number of books about it. The quality of the fish toppings was so-so, with little difference among the chains. This is only to be expected when you consider the modest price tags—just ¥500–¥600 for a serving. But among the four chains, there was just one whose product passed muster as genuine sushi in terms of texture and shape. Not only did it match the sushi sold in supermarkets, but it even came close to sushi restaurant quality. We were surprised to discover that a convenience store had been able to reach such a level. The one that stood out was Lawson.

The first feature that sets Lawson’s sushi apart is its shape. The difference is clear if you compare the sushi by looking at the packages from above. With the other chains’ sushi, the topping does not completely cover the rice below. This makes the product look amateurish, and it would surely turn off a true sushi lover. Lawson’s sushi alone has tane (toppings) that properly conceal the shari (sushi rice base) on which they rest. 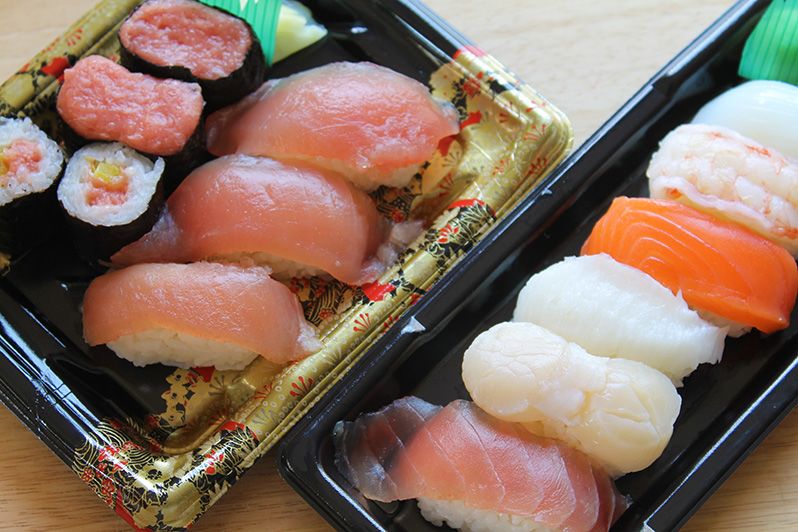 The difference is even greater when you put a piece into your mouth. The Lawson sushi has a rice base that is soft and falls apart in your mouth, like the shari of sushi freshly prepared by a chef. Just about all of the sushi from the other chains had firmly pressed rice. The mouthfeel was nothing like that of a chef’s sushi; it was like eating onigiri (rice balls), which must be thoroughly chewed before swallowing.

Convenience store sushi is kept chilled to 3°C–6°C, both during shipping and while on display. At such low temperatures the rice tends to dry out. If it is pressed together only lightly so as to be soft, there will be that much more air within the rice base, meaning that it will be even more liable to go dry and lose its proper flavor. Good sushi is supposed to have a lightly packed base that will come apart in your mouth. This is hard to achieve in the case of konbini sushi, which must be kept chilled for an extended period.

But the sushi from Lawson, even though it is stored at low temperatures, has rice that is neither dry nor too tightly packed. How is this possible?

Robots That Don’t Squeeze the Shari

Seeking the answer to this riddle, I visited Lawson’s  Merchandising and Logistics Division and posed the question to Matsumoto Shigeru, senior merchandiser in the Rice Foods Department. “Indeed,” he said, “the people in charge of sushi merchandising at supermarkets were also surprised. ‘Why doesn’t the rice harden?’ they wondered.”

As I listened to Matsumoto’s explanation, one key point became clear to me, namely, that Lawson was strongly focused on professionally prepared sushi as the model for its own product. Rather than looking at their rivals in the convenience store business or at supermarkets, the people at Lawson set their sights on regular sushi restaurants.

First of all, they slimmed down the shari: The other konbini and the low-priced conveyor-belt sushi restaurant chains generally use 18–20 grams of rice in the base of each piece of sushi. Lawson decided to use just 16 grams. This is similar to the shari at an upscale sushi restaurant. And it is the way to produce pieces of sushi that have attractively slender bases.

Next—and this is extremely important—they came up with a new type of robot completely different from the ones their rivals use to put the sushi together. Sushi chefs use a technique called kotegaeshi, or the finger flip. They lay the fish or other topping on the palm of their hand, put rice on top of it, and then nimbly flip the pair over with their fingertips. This is the standard method for human sushi chefs, but Lawson, according to Matsumoto, was the first to develop a robot that could duplicate this technique.

The robot that Lawson developed is also designed to make sushi in what is considered to be the ideal form. Well-shaped sushi has a cross section in a shape that is described as resembling the paper portion of a folding fan, with sides that taper toward a base that is concave. Lawson’s robot produces pieces of sushi in this shape, looking as if they were made by a chef, quite unlike the barrel-shaped pieces one often sees in low-priced sushi. 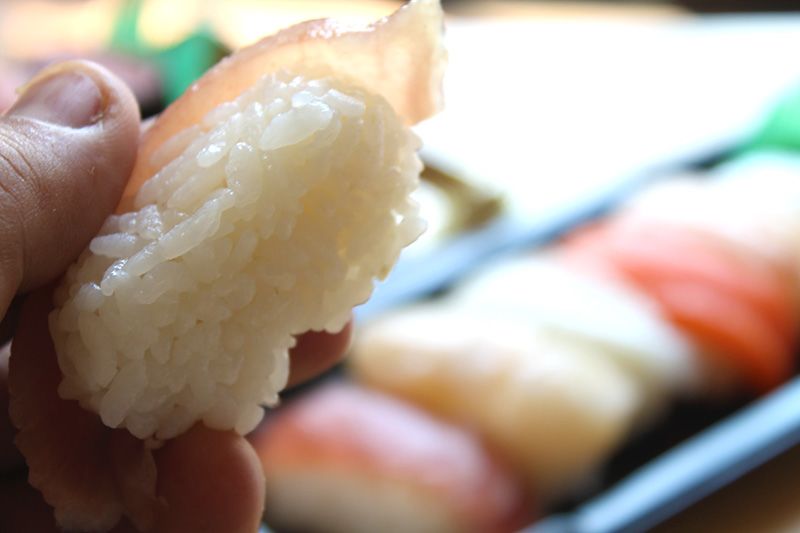 Lawson’s sushi has a dimple in its rice base, just like good restaurant sushi. This is considered the ideal shape, and it enhances the eating experience.

The combination of the finger-flip technique and the ideal shape results in shari that falls apart nicely in the mouth, so it does not feel too chewy. Furthermore, it gives a surface that is firmly packed, which helps keep the rice from drying out. In other words, the answer to the Lawson sushi riddle lies in the production method and the shape.

As Matsumoto recalls, “It was quite a job for the robot manufacturer, because we had them start completely from scratch and make original dies and molds.” It was by overcoming this hurdle that Lawson was able to produce sushi of such surprisingly good quality.

The Importance of the Target in Product Development

The history of the convenience store business is a history of fighting to win turf from other types of businesses. A recent example is the move to offer higher-quality sweets. By aiming to rival the offerings of confectionery shops, the konbini chains have reached the point where their products look and taste almost too good to be from a convenience store. Their popular cake rolls and cheesecakes are prime examples.

According to Matsumoto, konbini sushi has a mission: “The number of [food] products that people will accept at night is actually quite limited. We want to make our sushi shine as a prime item for the late crowd.” For example, businessmen returning home after working late are willing to spend a fair amount of money for something to eat, and even if the product is in the ¥500–¥600 price range, if it’s good, they’ll buy it. Given the nature of the mission, attention to the details is the key to success.

The lesson to be drawn from this case is that the nature of the final product depends largely on the original target set for it. What is the difference between a piece of sushi prepared by a proper chef and one that looks like an amateur’s product? It was by analyzing the differences of shape and texture that Lawson was able to come up with a product that defies the usual image of konbini sushi. The importance of the target is a lesson that applies to every type of product development.