The Future of Japanese Film

The True Story of the Downed Dakota

Culture Oct 2, 2013
In 2013, a year that marks 400 years of exchange between Japan and Britain, a little-known incident involving the two nations that occurred five months after the end of World War II has been made into a motion picture: Fly, Dakota, Fly! directed by Aburatani Seiji and starring Higa Manami in her first lead role. 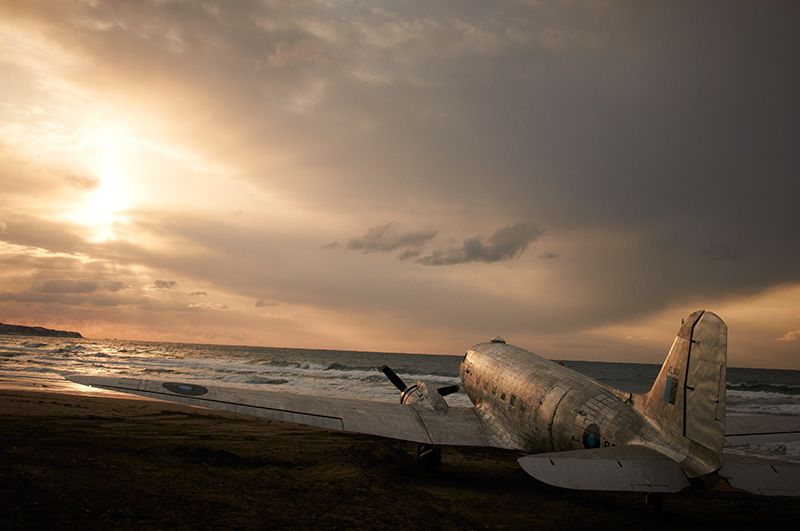 Fly, Dakota, Fly! is a film about a British Dakota military transport plane, the Sister Ann, which made an emergency landing near a hamlet on Sado Island in Niigata Prefecture after World War II but was able to return safely to its base thanks to the assistance of the entire village. The movie tells the story of the bonds that formed between the islanders and the soldiers, as well as their mutual revitalization. The production was three years in the making and endured a somewhat bumpy ride to completion, but the island’s 3,000 inhabitants continually gave their full cooperation, working behind the scenes and even appearing as extras. It could well be described as a film that encapsulates the spirit of the Sadonmon, or Sado natives—one that could not have been brought to fruition without their concerted efforts.

What were the reasons for making a film of this untold story now, nearly 70 years after the actual events?

The Sadonmon Spirit Saves the Day 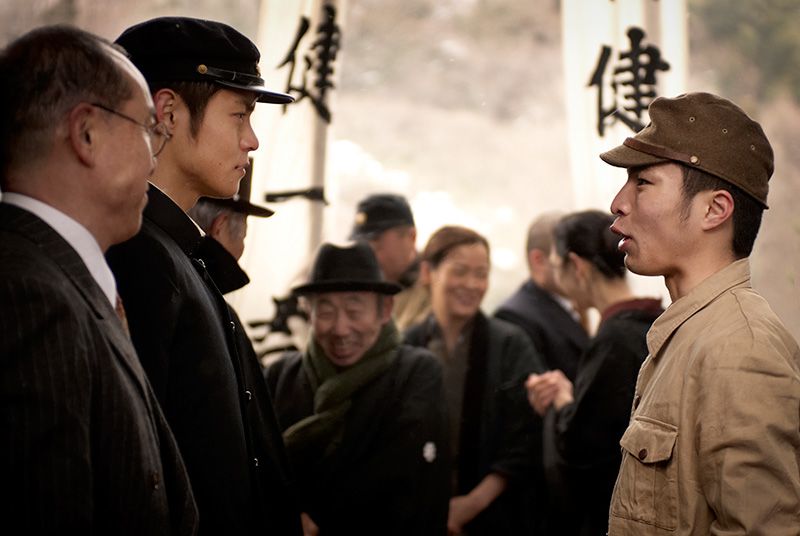 On January 14, 1946, only five months after the end of World War II, the Sister Ann—a British Royal Air Force Dakota transport—made an emergency landing near the tiny village of Takachi on Sado Island. (The name “Dakota,” commonly used in Australia and Britain for this class of aircraft, came from the acronym DACoTA, for Douglas Aircraft Company Transport Aircraft.) The sudden arrival of a military plane from the former enemy nation of Britain sent the villagers into a state of confusion and unease.

Sado, however, had a history as a haven for exiles ranging from Emperor Juntoku (1197–1242) and the Buddhist priest Nichiren (1222–82) to runin, the criminals banished to islands during the Edo period (1603–1868). Its people believed that helping those in need was part of the Sadonmon spirit. The entire village came to the aid of the Dakota. In actual fact, they dragged the plane out of the sea with ropes to avoid the fierce winter windstorms called nota in the local dialect. They went on to spend around 40 days stacking stones to build a runway roughly 500 meters in length, allowing the Dakota’s crew to make a successful takeoff.

Some islanders who helped build the runway still live nearby, and are now in their seventies and eighties. Nevertheless, why has this moving tale not come to light before this? The fact that it happened during the chaotic period immediately following the war is partly attributable, as is the strange destiny shared by the crew of the Dakota and Japanese troops dispatched from Sado. 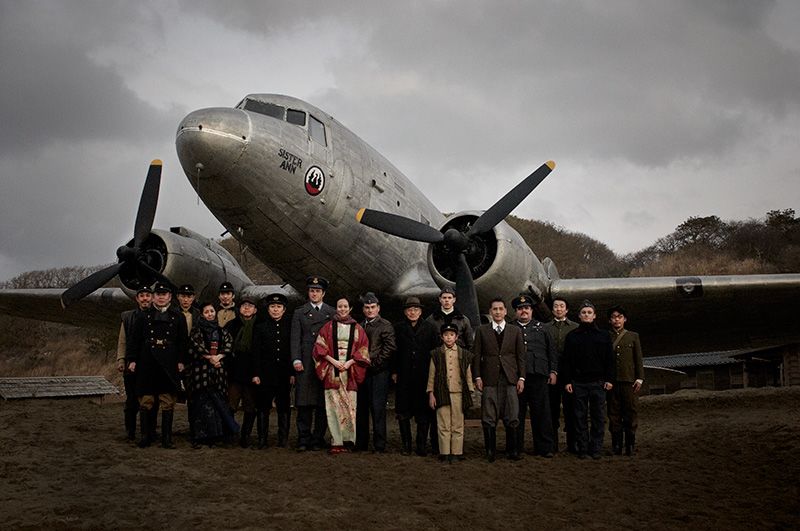 The Sister Ann was a special VIP plane that had been exclusively used during World War II by Lord Louis Mountbatten. He had engaged Japanese forces in battle on the Burmese Front as head of Britain’s South-East Asia Command. After he emerged victorious, he gained the title of the first Earl Mountbatten of Burma.

Lord Mountbatten was not on board when it touched down on Sado, but the British Consul-General for Shanghai was a passenger, bound for Tokyo to attend a conference of the Allied powers. The transport plane bounced along the shore three times and came dangerously close to colliding with a rocky reef, but was saved when it became snagged on a bollard.

The Dakota was a C-47, a mass-produced military version of the DC-3 commercial transport plane built by the Douglas Aircraft Company that was used to carry General Douglas MacArthur, Supreme Commander for the Allied Powers, to the Atsugi naval air base after World War II. These aircraft also played an important role as long-distance transports during wartime. As it happens, the C-47 that landed on Sado still exists, and is preserved in a hangar at the Avon Park Executive Airport in Florida by its American owner. However, because it is privately owned, the filmmakers were unable to gain permission to use it in their production.

Instead, the camera crew traveled around the world in search of a substitute, and eventually discovered a Dakota in Thailand. They had it disassembled and shipped to Sado, where it was put to full use in the making of the film. Its full length is 20 meters, its wingspan is 30 meters, and it weighs six tons, giving it an imposing presence. The Dakota remains to this day at its new home on Sado’s Sobama Beach, where the film was shot.

The Burmese Front: A Tragic Undercurrent to the Story

There are reasons why this little-known episode was kept under wraps for over 60 years.

“At the time the Dakota landed, most Japanese troops had not yet returned from their postings overseas, so the island’s population consisted entirely of elderly people, women, and children,” says the film’s local production coordinator and Sado native Watanabe Hiroshi. There were therefore few people who could relay the story to future generations after the war.

Watanabe suggests another reason. “Some soldiers from Sado died in the war, and more than a few returned to the island after the incident. Others lost brothers in arms under their command on the battlefield. It was not a time when people could say out loud that they did a ‘good deed’ in helping the men on the Dakota.”

In one crucial scene in the film, a naval academy graduate named Kimura Ken’ichi (played by Kubota Masataka) allows his burning hatred of the invaders to get the better of him and attempts to set fire to the Dakota. His actions are sparked by the arrival of a death notice for a close friend stationed on the Burmese front and his realization at the same time that the plane is none other than a former transport for British military dignitaries in Burma. 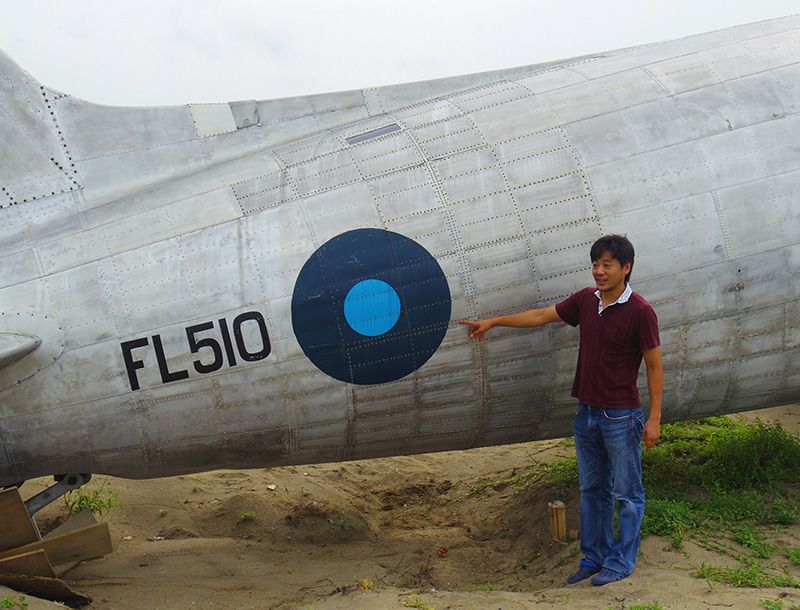 Production coordinator Watanabe Hiroshi in front of the plane on Sado’s Sobama Beach.

What is more, the proprietor of the Hattori Ryokan, the inn where the Dakota’s crew and passengers stayed during their 40 days in Takachi, also happened to be the head of the village. The inspiration for the film’s protagonist, Morimoto Chiyoko (played by Higa Manami), is Kajii Chiyoko, the third daughter of the family that owned and operated the inn. She is still alive and kicking at the ripe old age of 87.

However, according to Watanabe, when he initially asked Kajii and her relatives who run the Hattori Ryokan for their cooperation in making the film, he was told that they were reluctant to do so because the family’s eldest son was responsible for the deaths of his men on the battlefield. Memories of war do not fade easily, but the innkeepers eventually came around and helped the production a great deal.

The most significant reason why the story came out in the open was an unexpected encounter three years ago. A descendant of an American mechanic who had been dispatched to Sado from a US military base to help prepare the Dakota for takeoff paid a visit to the island and told a member of the inn’s staff that his father had been treated with kindness during his time there. He had wanted to return to Sado one more time, but died before he was able to.

A Creative Approach to Props 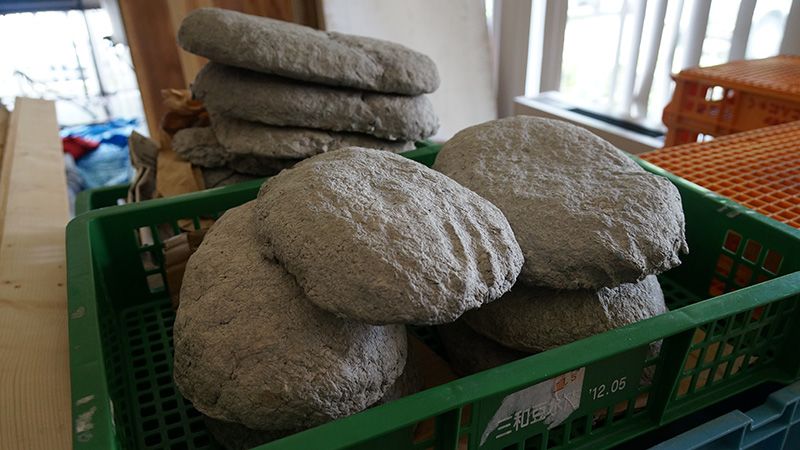 A “stone” made of newspaper for use in the film.

Fly, Dakota, Fly! was filmed entirely on location on Sado between February 2012 and January 2013, but the shoot did not go smoothly. The production was budgeted at approximately ¥200 million—not an amount that could be procured exclusively from island residents. To keep costs to a minimum, the crew made every effort to collect small household objects, kimonos, and other items from the era for use as props. Other preparations steadily fell into place: the production staff negotiated the exclusive use of a local company’s employee dormitory for a cut-rate fee. It was very much a labor of love.

One particularly problematic discovery was that the island’s shoreline was mostly quasi-national parkland, so it would not be possible to use stones from a nearby beach to build a runway along it. Shipping them in from the mainland, meanwhile, would incur a massive cost. For that reason, the crew asked the local community to assist them in making papier-mâché stones out of newspaper. Their production target of 15,000 rocks was met with the help of schoolchildren and women from nearby communities. But drying these lumps of soggy newspaper was no easy task. “After trial and error, we used a dehydrator from a nearby shiitake mushroom farm and somehow managed to dry the fake stones in time for the shoot,” says Watanabe.

With that hurdle out of the way, the fake stones were place on the beach to shoot the relevant scenes, but the weather deteriorated and the papier-mâché imitations were washed away by incoming waves. “People who had helped us make the stones asked us ‘How did it go?’ but I just couldn’t tell them they were swept away. It was truly heartbreaking,” says Watanabe. “The whole crew pulled together to retrieve the wayward stones, and we only just succeeded in completing the shoot with what we had left.”

For the film’s climactic scene, when the Dakota takes to the air once again, around 300 extras were recruited, mostly from among the local population. In total, the entire shoot involved 3,000 people including extras, behind-the-scenes staff, and the volunteers who helped create the fake stones. This movie was made possible by the full cooperation of the island community, in a fine display of the Sadonmon spirit. The film crew has nothing but praise for the people of Sado, saying that they could not have done their jobs without the assistance of the locals . . . just as their ancestors had done after the Dakota made its emergency landing all those years ago. Naturally, they also received support from Takahashi Michiei, president of the local newspaper, the Niigata Nippō, which helped make it into an event befitting of the 400th anniversary of the first exchange between Japan and Britain.

The colorful cast for this work of nonfiction is headlined by Higa Manami and includes the renowned Emoto Akira (Unforgiven) as the head of the village, Bengaru (Oba, the Last Samurai), and Yoshimoto Miyoko (Fried Dragon Fish). Fly, Dakota, Fly! is a film that transcends the turbulent emotions of war and takes flight toward a new era of friendship between Japan and Britain.