Politics Oct 19, 2012
A major step toward resolving issues related to Myanmar’s ethnic minorities was made at a Nippon Foundation–led conference in mid-October 2012. The event, attended by a 20-member delegation of an alliance of armed ethnic minority groups, unveiled a humanitarian aid plan to assist internally displaced persons in Myanmar. The plan is part of the larger peacebuilding effort in the country, which is vital to the fate of its fledgling democracy.

Myanmar was transformed from international pariah to newborn democracy after its long-ruling military junta was replaced by a civilian government in March 2011. This historic change has brought an enormous wave of global interest, as business leaders and government officials around the world scramble to get in on the ground floor of the nation’s economic development.

But many hurdles to democratization and economic growth in Myanmar remain. One of the biggest challenges stems from the continuing armed conflict between the central government and the numerous ethnic minorities inhabiting Myanmar’s border areas. These conflicts, which have persisted for decades, have resulted in roughly a million IDPs, or internally displaced persons. The role of the international community in helping to broker a lasting peace is essential, and already Japanese organizations are taking positive steps in that direction.

In June 2012, the Japanese government appointed Sasakawa Yōhei, the chairman of the Nippon Foundation, to be its ambassador for the welfare of ethnic minorities in Myanmar. Sasakawa and his organization immediately set about the task of coordinating a plan to provide emergency humanitarian relief to IDPs in areas controlled by armed ethnic groups. On September 23, the Nippon Foundation signed a memorandum of understanding regarding the relief plan with the United Nationalities Federation Council, an alliance of 11 armed ethnic minority groups in Myanmar. This was followed, on October 6, by the signing of an MOU with the Myanmar government allowing the Nippon Foundation to carry out humanitarian aid relief in the ethnic areas.

In mid-October, a 20-member UNFC delegation with representatives from 10 ethnic minority groups traveled to Tokyo to work out the details of the plan with the Nippon Foundation at the Conference on Emergency Humanitarian Aid to Myanmar Ethnic Groups. This was followed by an October 18 press conference at the Nippon Foundation’s head office to present an outline of the plan. 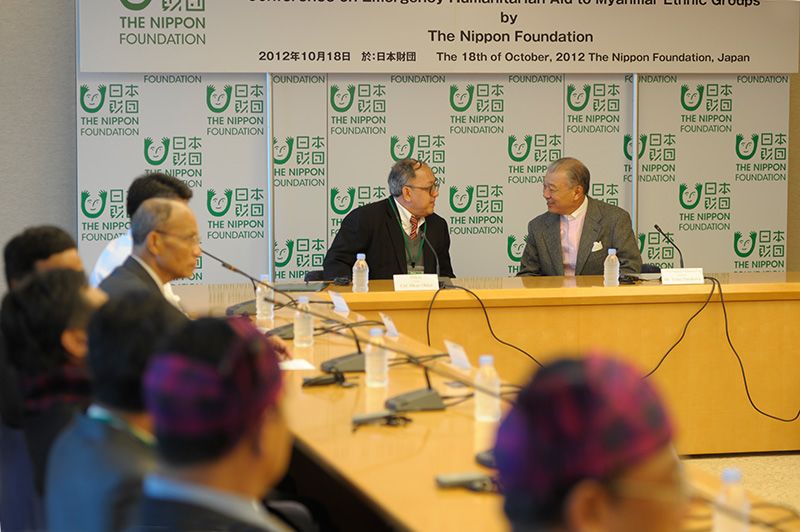 The Nippon Foundation is well positioned to act as an intermediary in Myanmar, given its long history of implementing beneficial projects in the country. This dates back to 1976, when the organization began its efforts to eliminate leprosy in Myanmar through the free distribution of medicine and human-resource development. From 1976 through 2011, the foundation implemented 37 wide-ranging projects, with a combined budget of nearly $20 million. This long-term humanitarian commitment has earned the organization respect and trust among both ethnic minority groups and Myanmar’s government officials. 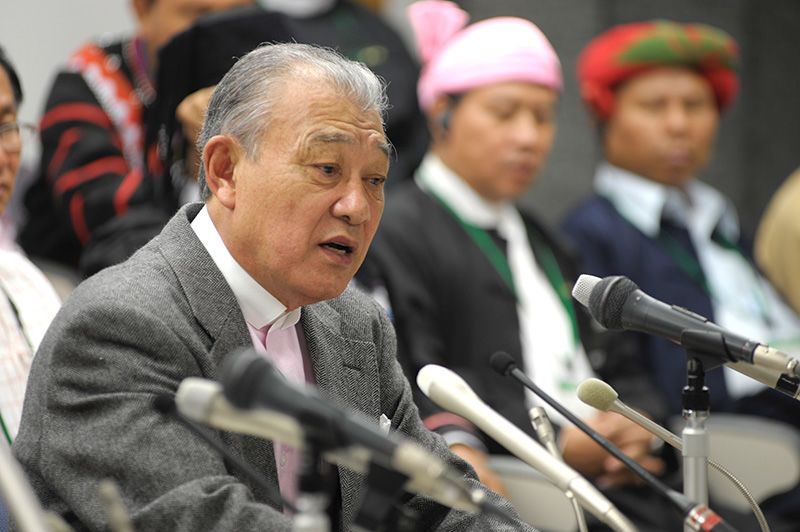 As Sasakawa explained at the October 18 press conference, the Nippon Foundation’s ongoing engagement with Myanmar, including the latest humanitarian relief plan, reflects its role as a “social innovation hub” dedicated to fostering networks of mutual support.

In his comments at the press conference, the head of the UNFC delegation, Colonel Hkun Okker, warmly welcomed the participation of the Nippon Foundation in the humanitarian relief initiative. He contrasted the foundation’s nonprofit, humanitarian approach with the attitude of those who “only exploit Burma [Myanmar] for business purposes and do not care about its poor people.” He also expressed his “pride [for the ethnic minority groups] to be recognized by the Nippon Foundation and the Japanese people,” given the absence of such outside recognition up to this point.

The plan unveiled at the press conference calls for a total of $3 million in humanitarian aid relief to be distributed in ethnic minority areas of Myanmar, beginning with an initial aid package of $300,000 and the monitoring of its distribution. The distribution effort will involve the active participation of the minority groups, with details to be worked out between the UNFC and the Nippon Foundation. 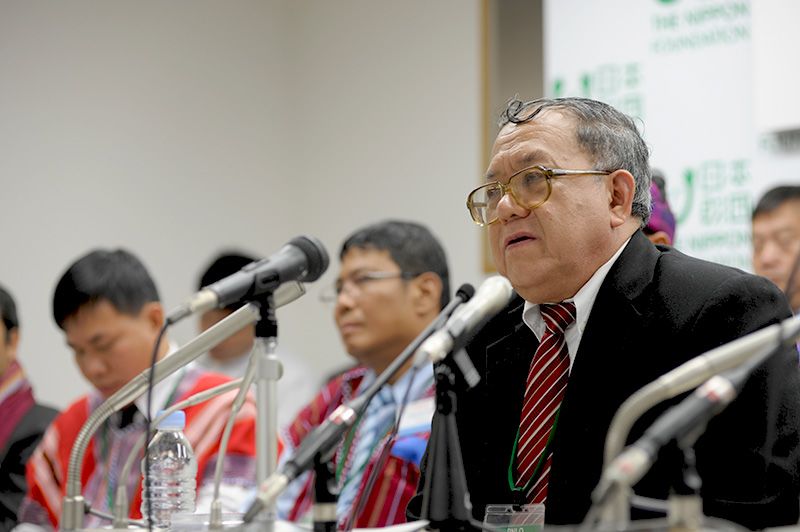 In addition to the importance of the relief effort itself, it is hoped that the plan will be an important step toward brokering peace between the Myanmar government and the armed ethnic groups. The pressing task in the short term is to reach firm ceasefire agreements and then to agree on the agenda for peace negotiations leading toward a lasting political settlement.

Given the level of acrimony resulting from the armed conflict, the road ahead is paved with difficulties. But this makes it all the more valuable for a humanitarian organization like the Nippon Foundation to play an active part in providing relief aid and building trust between the two sides.

The peacebuilding effort is clearly vital to the future development of Myanmar. As both President Thein Sein and opposition leader Aung San Suu Kyi pointed out to Sasakawa during his trip to Myanmar in June 2012, without resolving the ethnic-minority problem in Myanmar there is no way to build true democracy in the country. 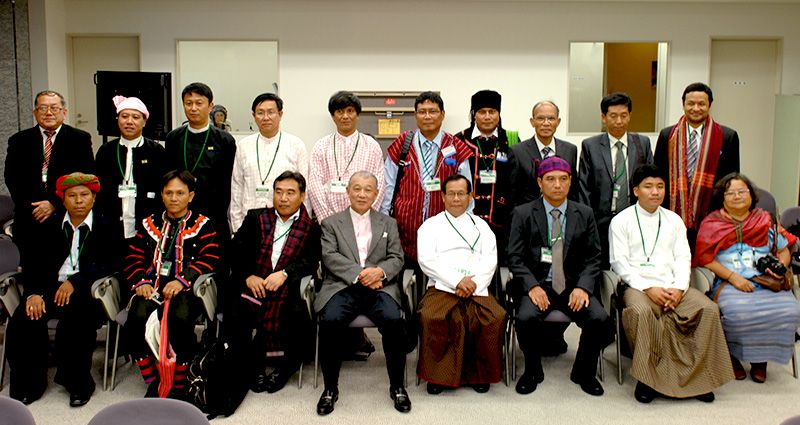 The Road to True Democracy in Myanmar