Society Culture Lifestyle Jun 19, 2013
There are around 80 mosques in Japan, many of them relatively small. The country’s biggest place of Islamic worship is Tokyo Camii, which has space for around 1,200 worshipers. Come with us as we pay a visit to this magnificent Ottoman-style mosque in the heart of the Japanese capital. 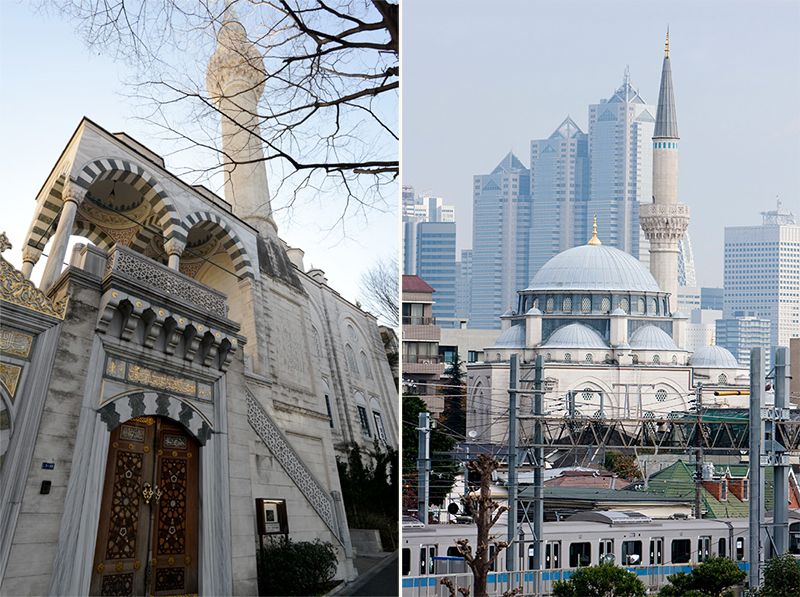 The minaret of Tokyo Camii against the backdrop of the Shinjuku skyline (right). From this arched balcony (left), the muezzin makes the call to prayer (“azan”). (Photo on the right courtesy of Tokyo Camii.)

In the heart of a quiet residential area in Yoyogi Uehara, just a short distance from the bustling city-center hotspots of Shinjuku and Harajuku, is a building whose towering minaret and impressive dome make it stand out from the surrounding architecture.

This is Tokyo Camii, the largest mosque in Japan, built in impressive Ottoman style. The English word “mosque” and its cognates in other European languages derive ultimately from the Arabic masjid, meaning “place where one bows one’s head.” Mosques can be found throughout Japan’s major cities—a fact that in itself is likely to come as a surprise to most Japanese people, who remain largely unaware of these pockets of Islamic culture thriving in their midst.

Camii is a Turkish word derived from the Arabic jami, and refers to a central “congregational mosque”—a major mosque where people gather for Friday prayers, the most important of the week. Tokyo Camii, the largest mosque in Japan, is architecturally similar to the famous Blue Mosque in Istanbul.

Apart from water, concrete, and steel, all the building materials and furnishings used in the mosque were brought from Turkey. Around a hundred Turkish artisans worked for a year to build the second-story mosque itself and the cultural center downstairs. The building itself is a work of art. 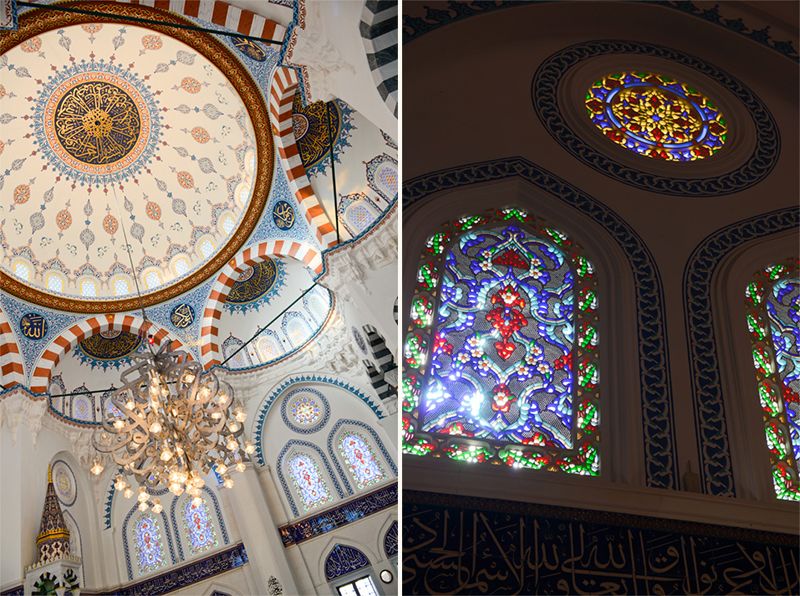 In the morning and early afternoon, the sunlight comes streaming through the stained glass windows, enveloping the interior of the mosque in an atmospheric light. Because of strict prohibitions against idolatry, the mosque depends on Arabic calligraphy and geometric designs for its interior decoration. The dome represents the wide expanse of God’s created universe. 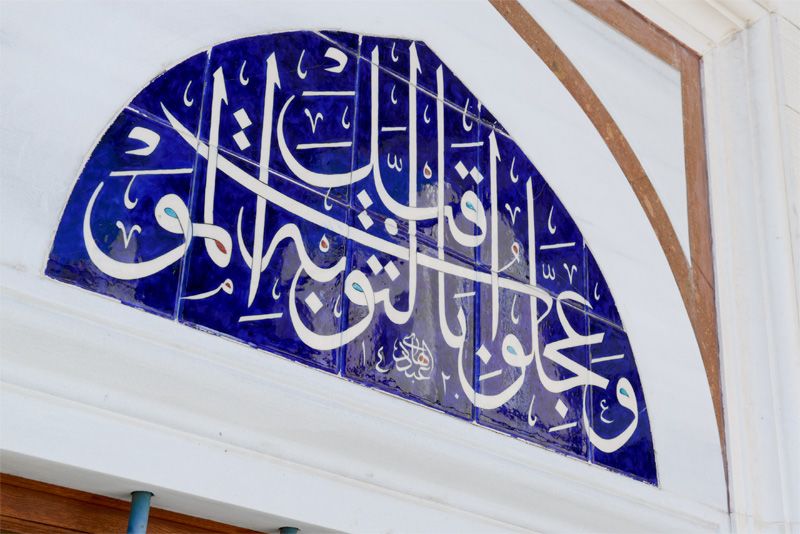 A verse from the Koran in Arabic calligraphy. 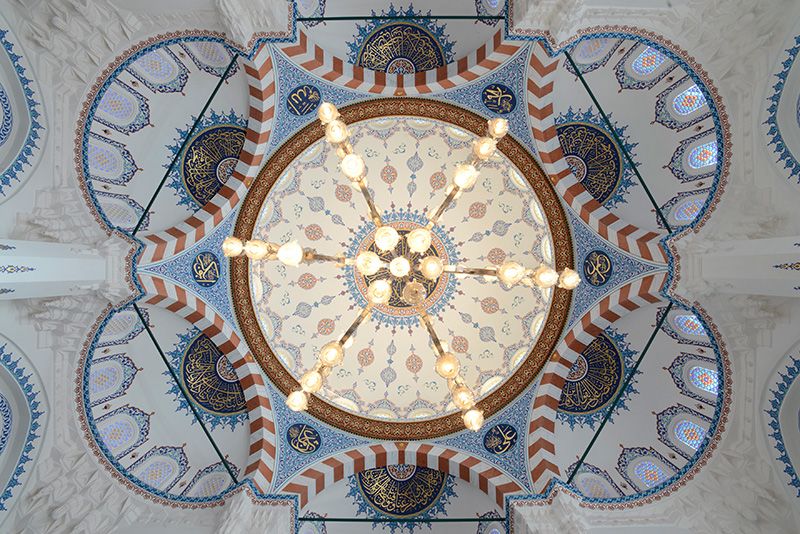 In many Turkish-style mosques, the roof of the dome is inscribed with Arabic calligraphy depicting the names of God (Allah), the Prophet Muhammad, and his four successors. 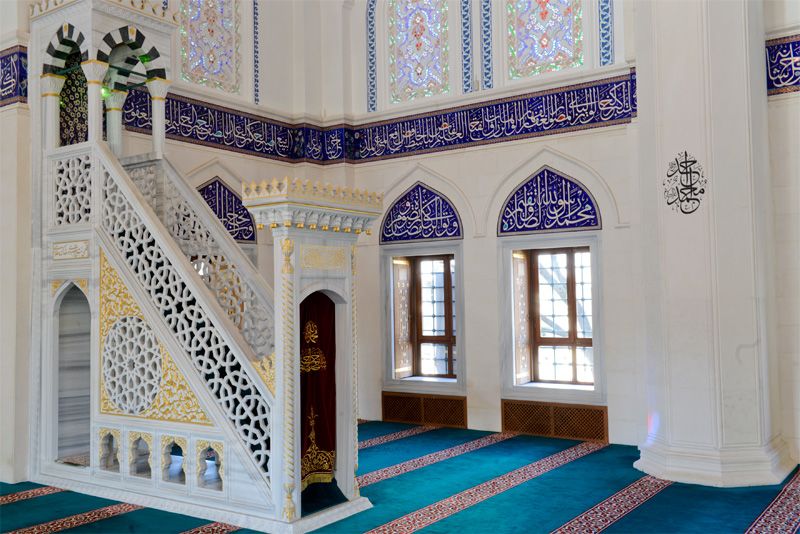 According to Islamic tradition, there are 99 names for God. These include “Al-Muhyi” (The Giver of Life); “Al-Khaliq” (The Creator), and “Ar-Rahman” (The Exceedingly Compassionate). The holy “most beautiful names” of God are written in beautifully flowing Arabic calligraphy on the walls of the mosque. In front of this is the minbar, the pulpit from which the imam delivers his sermon to the faithful during Friday prayers. 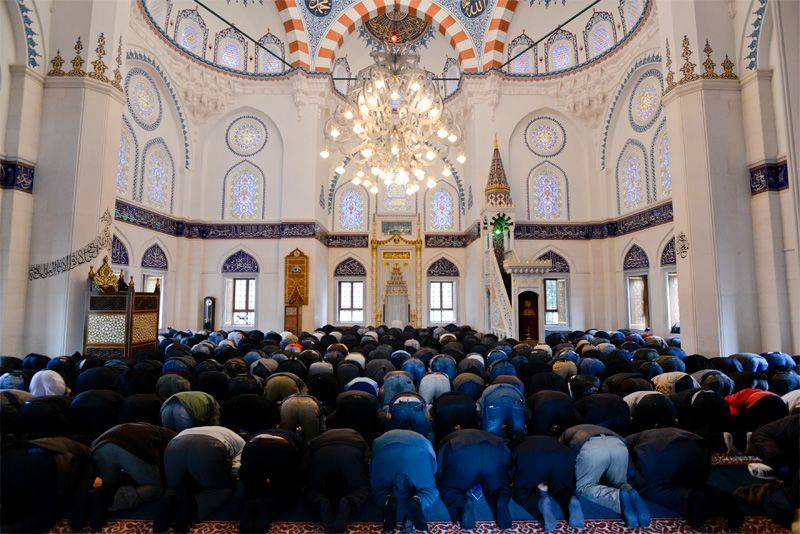 Muslims are supposed to pray five times a day. The most important prayers take place early on Friday afternoon, when large numbers of people attend the mosque. The faithful prostrate themselves in the direction of Mecca. The Muslim style of prayer, with everyone on the same level, symbolizes that all people are equal in the eyes of God, regardless of race or social status. Women pray in a separate section of the mosque. 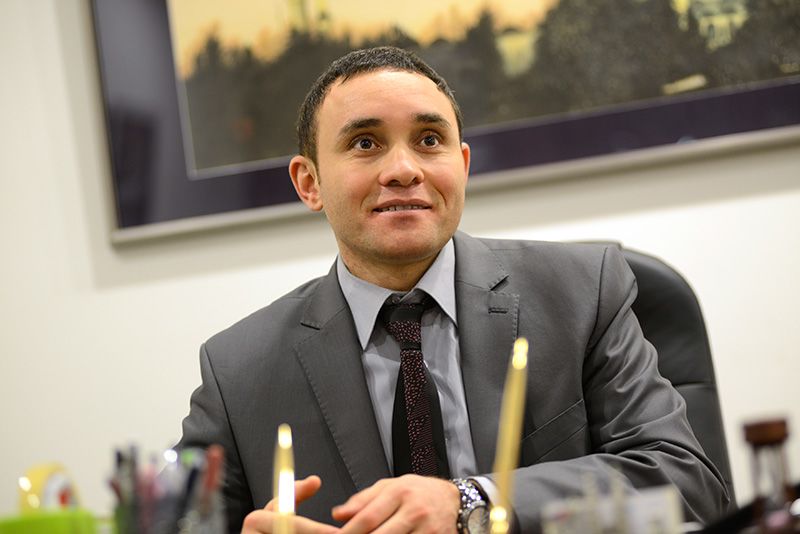 Nurullah Ayaz, imam of the Tokyo Camii mosque, came to Japan in summer 2012, after studying Japanese for five years at university in Turkey. He emphasizes the “many points in common between the Japanese national character and the conduct expected of a Muslim.”

The roots of Tokyo Camii are in Central Asia.

“Unfortunately, for much of Japanese history there was no direct contact with the Islamic world,” says Nurullah Ayaz, the imam at Tokyo Camii. “It was only in the twentieth century that a Muslim community first established itself in Japan. The first mosque in Tokyo was built by Tartars who came to Japan as refugees after the Russian Revolution in 1917. They were a Turkic group originally from Central Asia, who came to Japan via Siberia and China. As Muslims, the first thing they wanted to do in Japan was to build a school for their children and to establish a mosque where the community could pray. These Muslims received permission from the Japanese government in 1928, and the school opened in 1935. The first mosque was completed three years later, in 1938.”

(Left) The school in Tokyo for Muslim children, which opened in 1935. There are plans to demolish the school, which is starting to show its age, and build a new Turkish culture center on the site. (Right) The original Tokyo mosque, built in 1938—the precursor to today’s Tokyo Camii. The original mosque was demolished in 1986, and the current structure was completed in 2000.

Islam and Japan: Closer Than You Think

Friday prayers at Tokyo Camii are well attended by a growing congregation, most of them foreign-born. With the recent increase in the number of Muslims from Southeast Asia in particular, the Friday sermon is now given in Turkish, Japanese, and English rather than Arabic.

Despite a widespread image in Japan of Islam as a “desert religion” with its roots in the culture of Arabia and the Middle East, Egypt is the only Arabic-speaking country among the world’s five most populous Muslim countries, ranking fifth—behind Indonesia (250 million), Pakistan, India, and Bangladesh, in that order. In this sense, it would be no exaggeration to say that Islam is already on Japan’s doorstep.

Imam Nurullah says he wants Japanese people to feel comfortable and welcome in the country’s mosques.

“We try to give visitors a simple explanation about Islam. We give them a quick run-down on the etiquette when visiting a mosque. For example, women cover their head with a scarf (called a hijab) before they enter the mosque. We have head cloths available at the entrance for people to cover their hair and any exposed skin. Men cannot enter the mosque in short trousers that expose the legs. And people should refrain from conversation while prayers are in progress. Photography is not allowed without special permission. Otherwise, there aren’t really any rules that people need to worry about.”

One courtesy that Nurullah does want people to follow is to respect people at prayer by not cutting across in front of them. “The idea is that there should be nothing between you and Allah when you are praying. Cutting across people is tantamount to breaking that connection between the worshiper and Allah.” 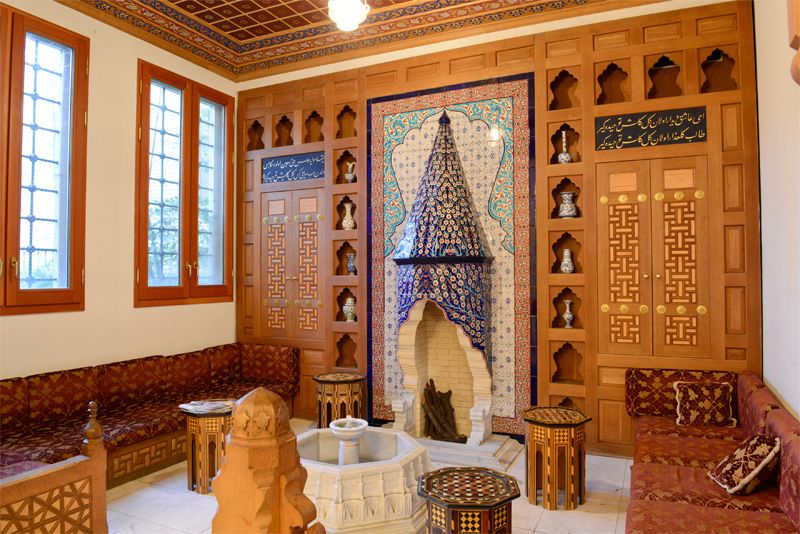 The reception room on the first floor, near the entrance to Tokyo Camii, is similar to the interior of a Turkish home. The central fountain and impressive tulip-motif tiled fireplace are typically Turkish. 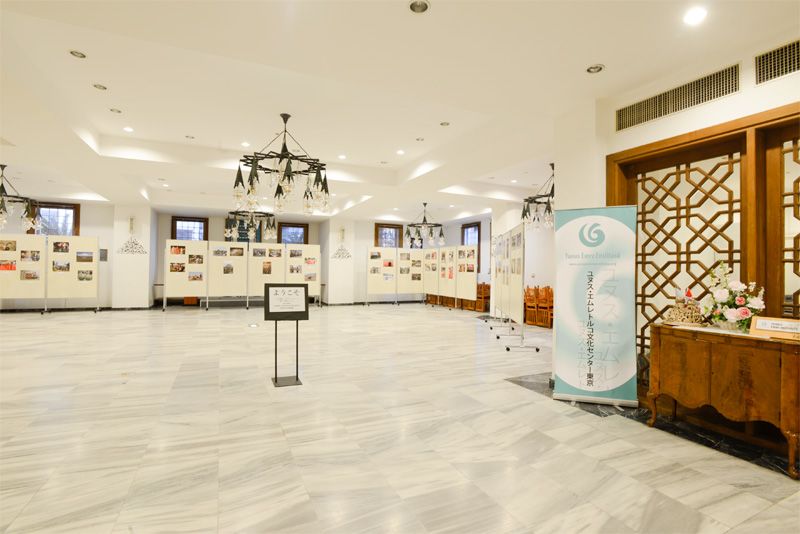 The multi-purpose hall on the first floor, where lectures on Islam are held, along with various events and parties. 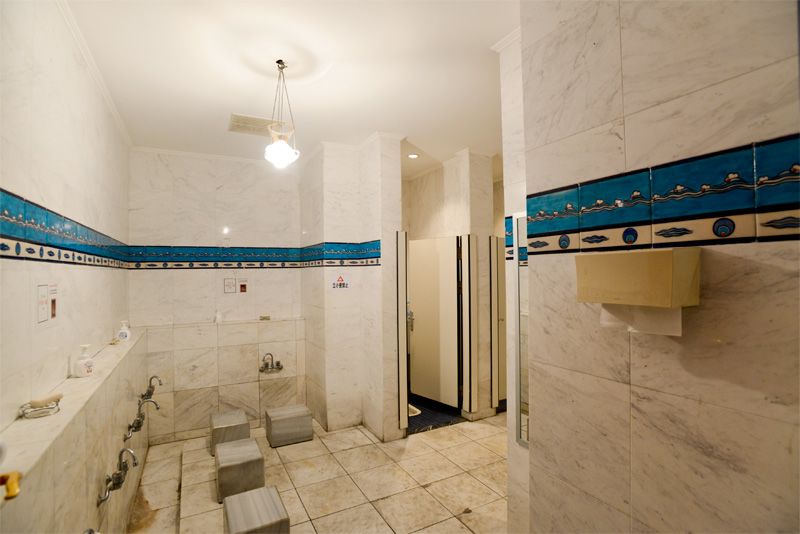 Muslims wash their face, hands, and feet in these ablution areas to purify themselves before prayer.

We talked to several visitors to the mosque.

Aromatherapist Okabe Yoshiko (left) says she has wanted to visit the mosque for some time, since she often passes it on her walks around the neighborhood. For some reason people often speak to her on their way out of the mosque, and today she decided to stop in and have a look around. “Unfortunately, today’s Japan is cut off from the universe. Coming to a sacred place like a mosque steadies the spirit. Your heart becomes calm and at one with the universe.”

Nasser from France (center) was visiting Japan from Dubai, where he now works. “I found out about Tokyo Camii on the Internet. As well as Tokyo, I’ve also visited Kyoto and Hiroshima. Everywhere’s been great. I was especially moved by the Atomic Bomb Dome in Hiroshima. I think Japan is a particularly spiritual country. People are kind and respectful of the values of others; everything feels very natural.” 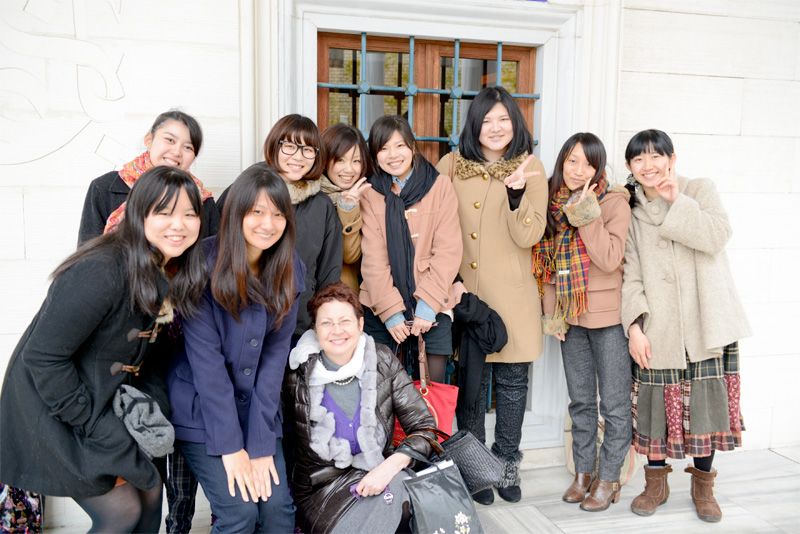 This group of students from Atomi University was visiting the mosque as part of a cultural studies program. “Islam is a religion where God has no form, and there’s nothing like the Buddhist images one sees in a Japanese temple,” one student said. “It’s a religion where there is direct dialogue between the individual and God. That’s one of the things that really made an impression on me during my visit today.”

(With thanks to Tokyo Camii and Turkish Culture Center. Photographs by Kodera Kei.) 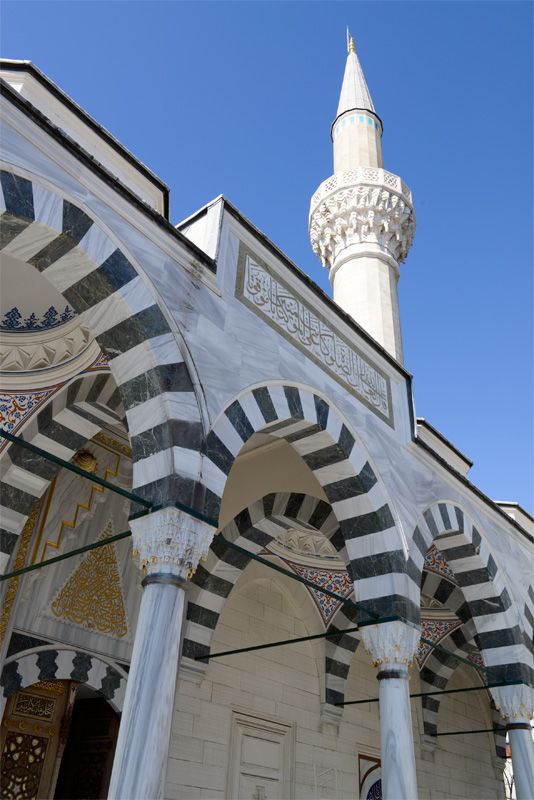 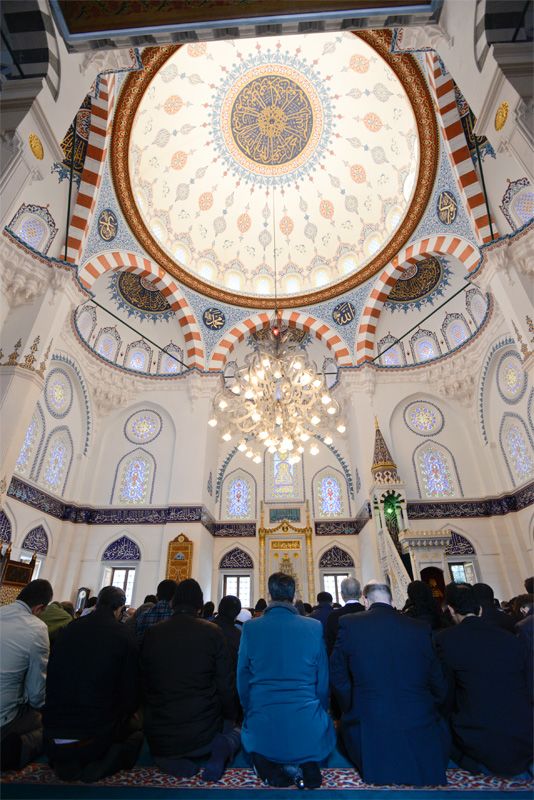 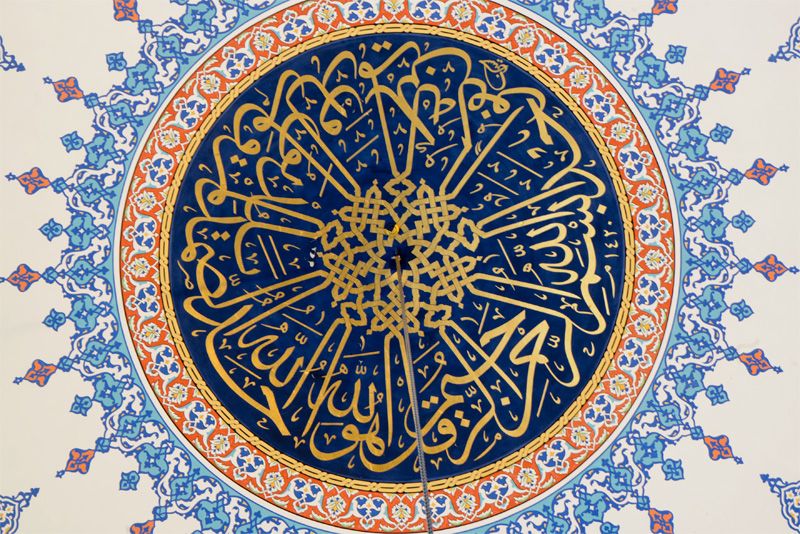 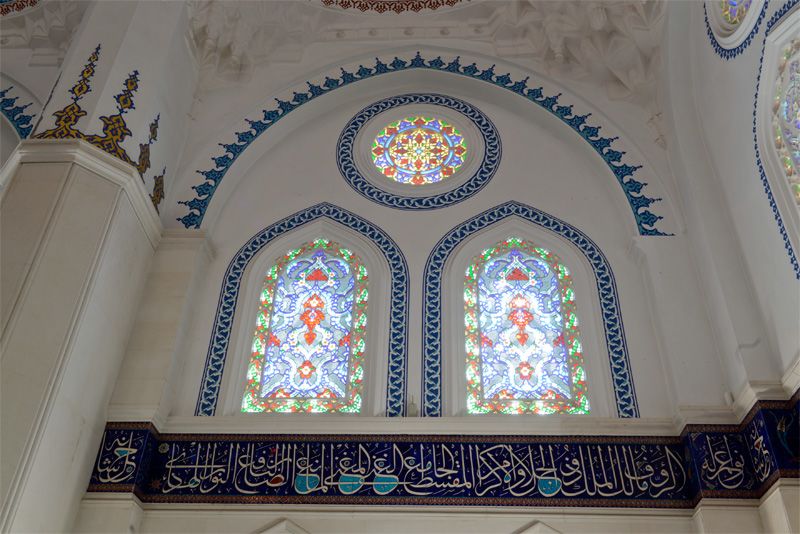 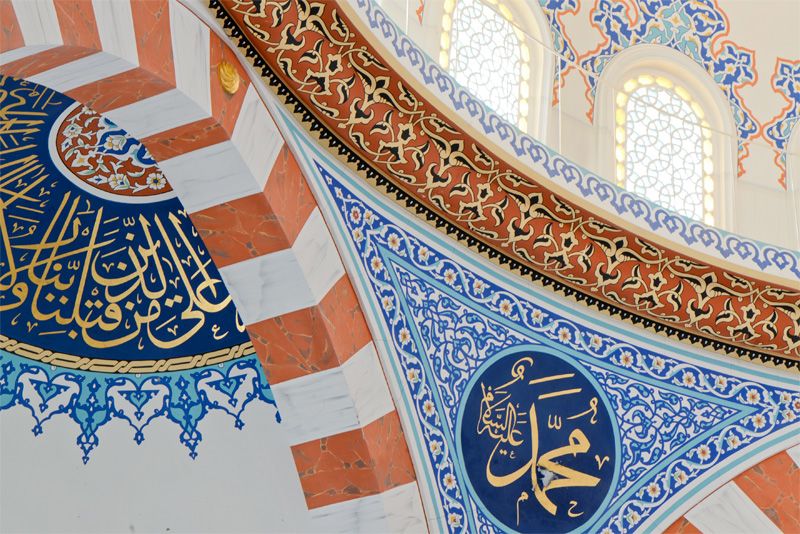 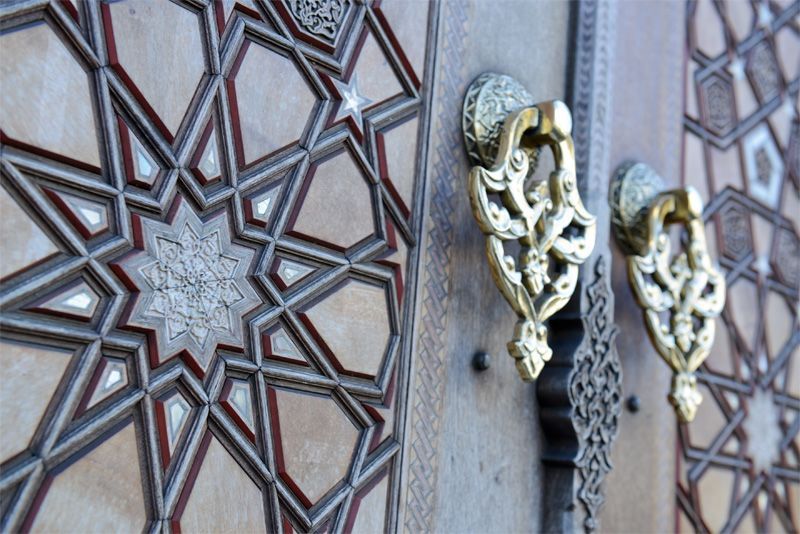 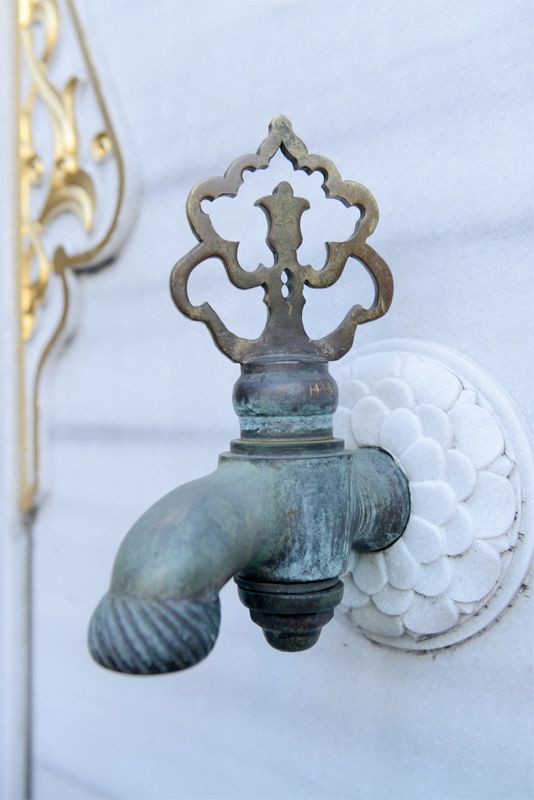 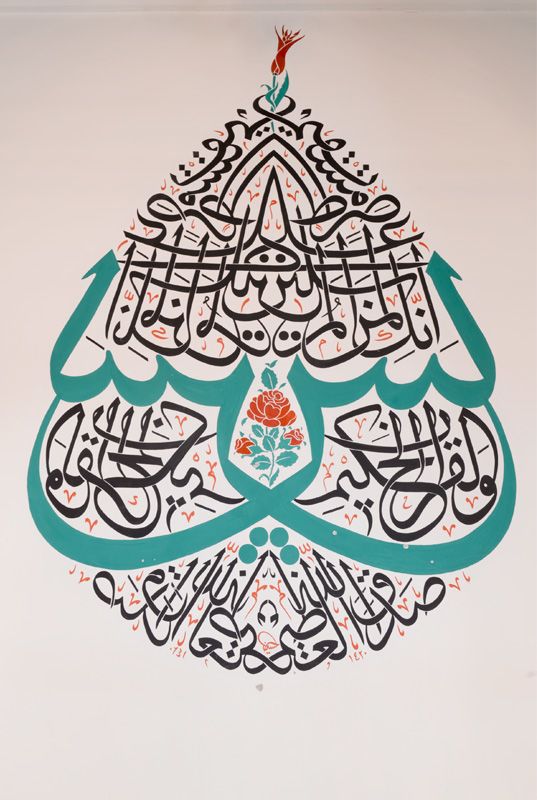 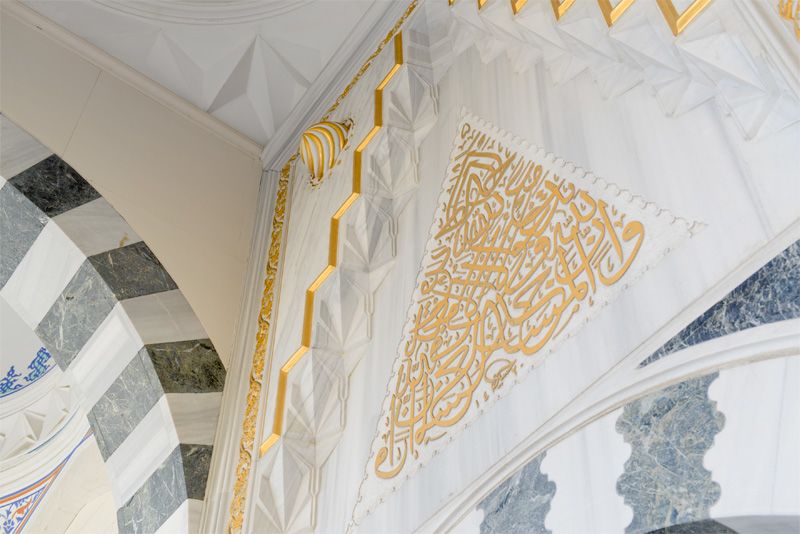 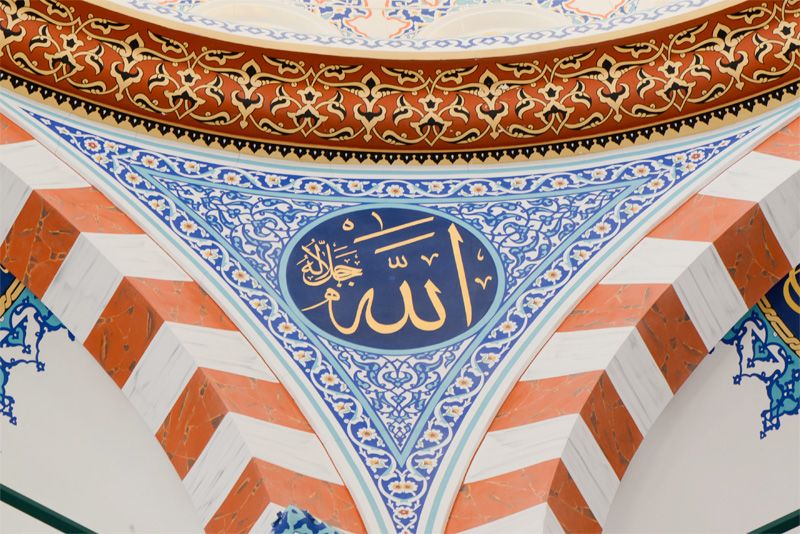 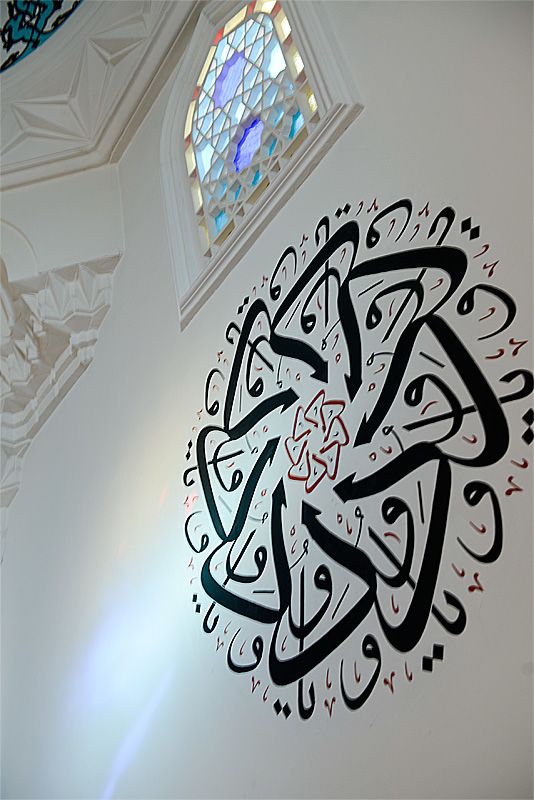 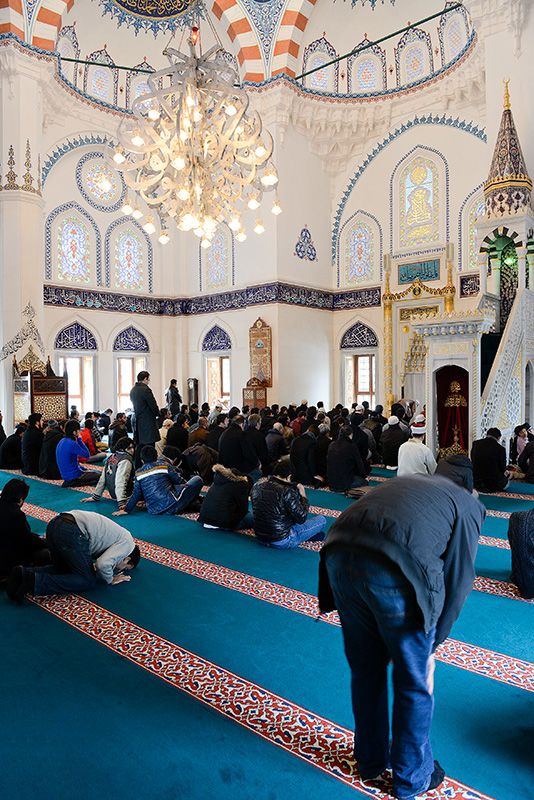 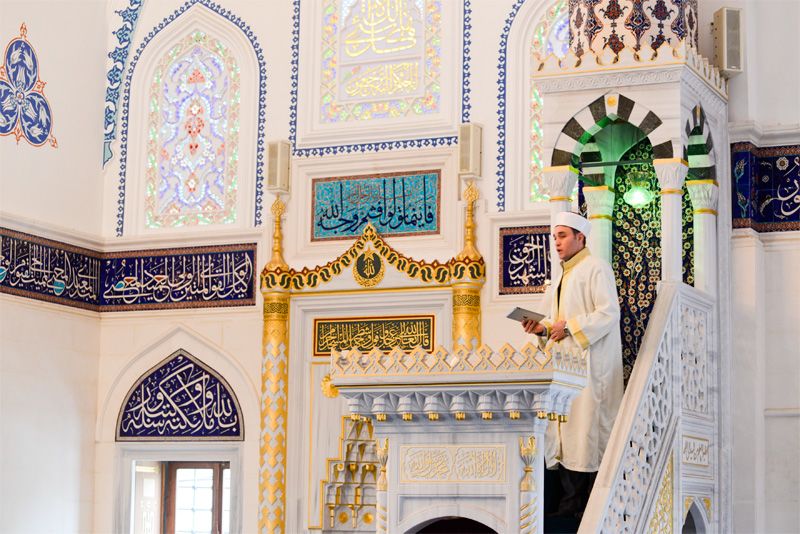 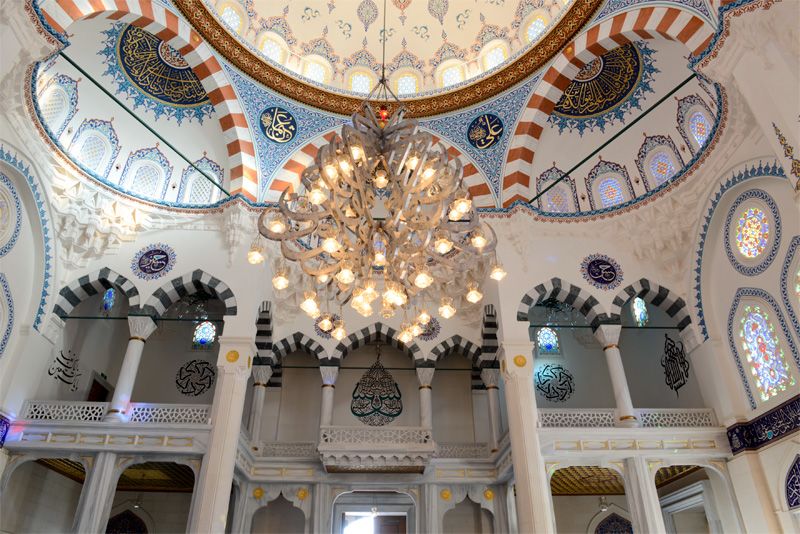