Sakamoto Ryūichi: A Trailblazer Reshaping the Art of Music

Culture Dec 12, 2016
Sakamoto Ryūichi won global fame in the late 1970s and early 1980s as a member of Japanese techno-pop group Yellow Magic Orchestra. In the ensuing decades he has continued to carve out new musical possibilities with genre-crossing works.

Sakamoto Ryūichi is one of the most important musicians of his era. His works encompass classical, jazz, and rock elements along with modern variations on folk traditions from around the world. Yet he cannot be pigeonholed into any one of these genres. Instead, he has compiled a singular style of music imbued with its own distinct characteristics. He displays an unmatched ability to unleash the subtle power of music through his exquisite melodies. Above all, he is notable for his tireless exploration of contemporary expressions of the art.

The composer, orchestrator, pianist, and music producer was born in Tokyo on January 17, 1952. His father Sakamoto Kazuki was a renowned editor who helped lay the foundations for postwar Japanese literature by bringing the works of Mishima Yukio and Noma Hiroshi to readers. This family background may have contributed to the younger Sakamoto’s precocious political awareness. As a high school student he became deeply involved in the student movement of the late 1960s that rose in protest against the Vietnam War and the administration of Japanese universities.

Sakamoto Ryūichi was still attending Tokyo University of the Arts when he made his professional musical debut in 1975, playing piano on an album by the gifted folk singer Tomobe Masato. At a time when youth culture was steadily winning acceptance in Japan, Sakamoto contributed to a burgeoning pop scene. He performed both live and in the recording studio with such Japanese artists as Yamashita Tatsurō, Nakajima Miyuki, Yazawa Eikichi, Yano Akiko, Ohtaki Eiichi, and Ōnuki Taeko. All contributed to the development of Japanese pop and were influential on later artists.

Sakamoto released his debut solo album Thousand Knives in 1978. The record took its title from a work by the Belgian-born poet Henri Michaux. Sakamoto used a synthesizer in the recording and completed the project almost entirely on his own. It was a pioneering album that opened a doorway to the coming digital age.

Around the same time, Sakamoto started the band Yellow Magic Orchestra with two former members of leading 1970s groups. Hosono Haruomi had played bass for Happy End and Tin Pan Alley, while Takahashi Yukihiro was the drummer for Sadistic Mika Band. YMO deployed synthesizers with revolutionary creativity and superlative technique, bringing to life a fundamentally new world of music. The band fused Eastern melodies with Western rhythms to form techno-pop, a distinct genre that was greeted with fervent enthusiasm by the younger generation. YMO’s impact extended beyond music to encompass fashion and social ideology, and its members were widely quoted as opinion leaders.

In 1979, the band’s debut album Yellow Magic Orchestra was released in the United States. YMO performed live overseas for the first time in Los Angeles the same year. Successive world tours in 1979 and 1980 took the group to such locations as London, Paris, and New York, establishing their global reputation.

The growing popularity of computer games in Japan brought electronic music to the forefront and helped fuel YMO’s popularity, extending it as far down as elementary school students and transforming the group into a social phenomenon. There was hardly a day when hit songs such as “Tong Poo,” “Technopolis,” and “Rydeen” could not be heard playing somewhere. In 1980, three of the band’s albums appeared in the top ten bestsellers of the year, a list topped by their second release Solid State Survivor. Many of those people for whom YMO was an entry point into music have gone on to become musicians in their own right, making the band’s influence incalculable.

During the same period, Sakamoto collaborated with the session band Kylyn led by jazz guitarist Watanabe Kazumi. He also got together with RC Succession front man Imawano Kiyoshirō in 1982 to perform on the song “Ikenai Rouge Magic,” creating a stir with his elegantly made-up face.

YMO broke up in 1981, but the three members have continued to come together on different projects. It was around this time that Sakamoto’s career began to diversify and one of his new roles was as a radio personality. On the air he encouraged listeners to send amateur tape recordings, helping to cultivate a new generation of artists.

After YMO, Sakamoto found particular success composing music for films. His debut effort, the 1983 score for Merry Christmas, Mr. Lawrence, won the British Academy of Film and Television Arts Award for Best Film Music. He also gave an individualistic performance in the film, directed by Ōshima Nagisa, acting alongside David Bowie and Kitano Takeshi. In 1987, he became the first Japanese winner of the Academy Award for Best Original Score for The Last Emperor, receiving the corresponding Golden Globe and Grammy awards for the same work. His scores for The Sheltering Sky (1990), Poppoya (1999), Femme Fatale (2002), and other movies further bolstered his reputation.

Sakamoto moved to New York in 1990. From this point he became increasingly active on the global stage. For example, he composed music for the Barcelona Summer Olympics in 1992 and appeared in person to conduct the orchestra at the opening ceremony of the Games.

He was in New York at the time of the September 11 attacks in 2001. From the 2000s, he has become more outspoken on social issues, such as pacifism and antinuclear environmentalism. This includes writing and other media work along with activities involving members of the public. After the earthquake and tsunami of March 11, 2011, he used his music to support children affected by the disaster. 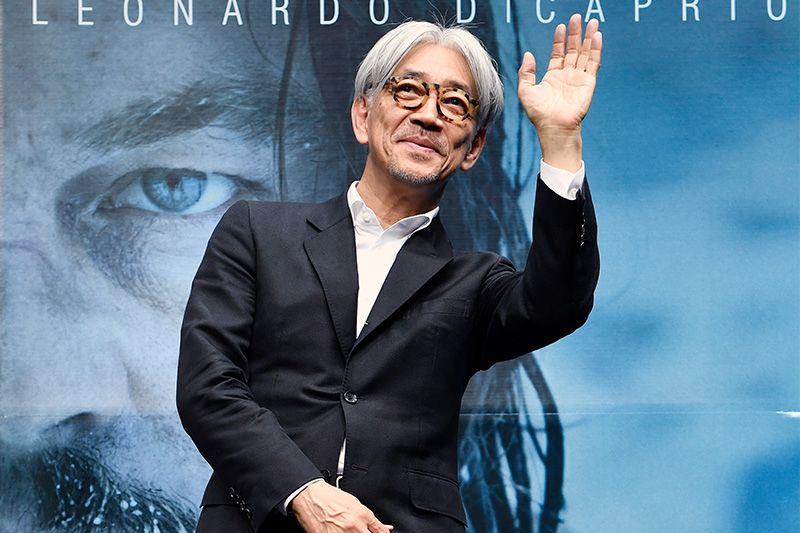 Sakamoto Ryūichi composed the score for The Revenant—for which Leonardo DiCaprio won the Oscar for best actor—together with German musician Alva Noto. He performed the theme at a special preview showing in Tokyo in April 2016. © Jiji

Sakamoto has written many pieces for television commercials. In 1997, public acclaim led him to release one of these compositions, the piano work “Energy Flow,” as a single. The recording became the first instrumental to top Japan’s Oricon Singles Chart, sparking a boom in so-called healing music.

From 1991, starting with his collaborative efforts with Brazilian master Caetano Veloso on the album Circuladô, Sakamoto increasingly worked with international artists, including Youssou N'Dour, Arto Lindsay, David Sylvian, Iggy Pop, and Pierre Barouh. In the 1980s, Eric Clapton recorded a version of the YMO song “Behind the Mask” with additional lyrics by Michael Jackson. After Jackson’s death, the king of pop’s own interpretation of the song featured on the posthumously released album Michael.

Sakamoto started the Commmons project in 2006 as a shared space for both established and up-and-coming artists and creators who wished to make social or cultural contributions. As one of the project’s activities, Sakamoto is overseeing the publication of a series of music e-books as editor-in-chief. The Commmons: Schola collection introduces a diverse range of music from classical composers like Johann Sebastian Bach and Erik Satie to jazz and traditional African music.

A Man of Many Faces

In July 2014, Sakamoto announced that he had been diagnosed with throat cancer. Following treatment, he returned to composing in August 2015, working on the scores for Yamada Yōji’s Nagasaki: Memories of My Son (2015) and Alejandro G. Inarritu’s The Revenant (2016). Both were highly acclaimed.

In each of his more than 20 solo albums, including Thousand Knives, B-2 Unit, Illustrated Musical Encyclopedia, Esperanto, and BTTB, Sakamoto has striven to expand the potential of music. He has transcended genre boundaries in taking inspiration from classical and electronic music, opera, rock, jazz, hip-hop, and ethnic traditions from Okinawa to Africa. Always looking to the horizon, he has constructed a space for new musical concepts.

He has a boundless curiosity and possesses many creative faces. He is sensuous, a theorist, academic, and romantic. Few have such a sincere approach to music and the age. This is Sakamoto Ryūichi. Out of affection and respect, he is known in Japan as “the professor.”

(Originally published in Japanese on November 15, 2016. Banner photo: Sakamoto Ryūichi performs at the No Nukes 2013 event, which advocated an end to reliance on nuclear power in Japan. © Jiji.)