Culture Feb 16, 2017
With major exhibitions opening in Japan and North America this year, 87-year-old Kusama Yayoi, known for her “obsessive” repetition of polka dots and reticulated patterns, is one of the most widely admired figures on the contemporary art scene today. Longtime champion Tatehata Akira traces the roots and evolution of her eccentric yet highly compelling idiom, from the “naked happenings” of the 1960s to the dazzling “pumpkin” installations of recent years. 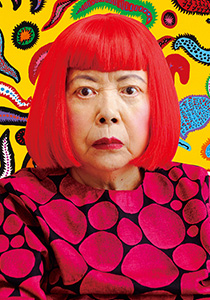 Artist and writer. Born in 1929 in Matsumoto, Nagano Prefecture. Began producing fantastic drawings and paintings from an early age, often incorporating spots, dots, and reticulated patterns. In 1957, moved to the United States, where she became a prominent fixture of the New York avant-garde scene. Returned to Tokyo to live in 1973. Represented Japan at the Venice Biennale of 1993. Solidified her reputation with the 1998–99 retrospective Love Forever, which traveled to the Museum of Modern Art, New York, among other venues. In 2009, began work on her series My Eternal Soul and has since been featured in solo exhibitions at museums and galleries worldwide, including the Tate in London.

In 2016, at the age of 87, Kusama Yayoi was awarded the highest national honor a Japanese artist can receive, the Order of Culture. Born in 1929 to a distinguished and prosperous family in the city of Matsumoto in Nagano Prefecture, Kusama achieved artistic success early on in a career that has reached its zenith over the past decade. Taken alone, such facts might lead one to surmise that she has led a charmed life, that her road to success has been an easy one. That would be very far off the mark.

In fact, Kusama’s life has been a series of bitter struggles. She has had to battle a debilitating psychiatric disorder that has plagued her since childhood, as well as the prejudice and misunderstanding of those around her. But from these trials emerged her dedication to art as a vehicle for an enduring message of salvation through love, along with a capacity to strike a deep chord in viewers the world over. 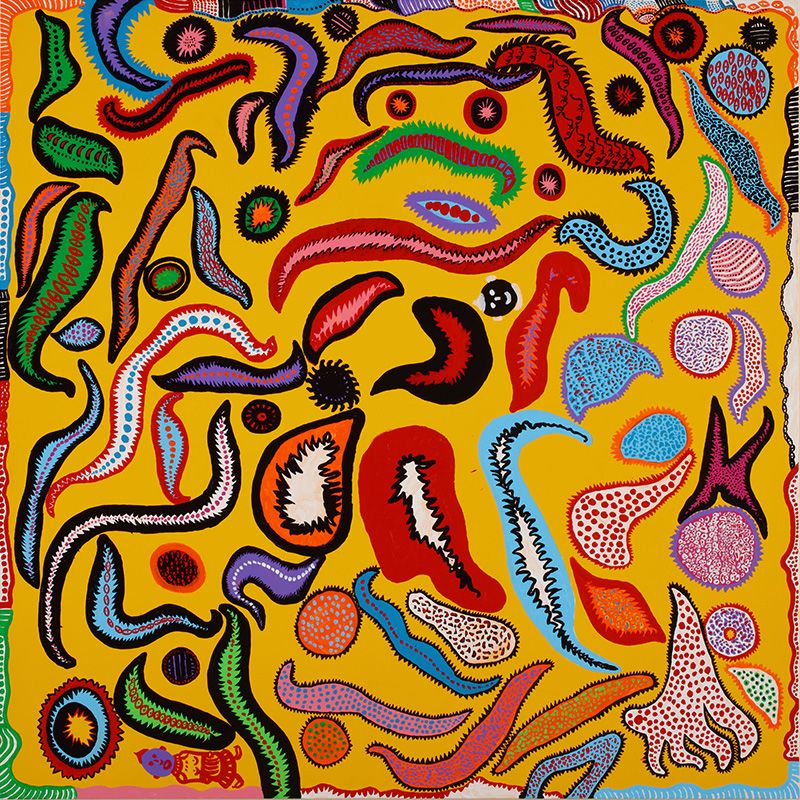 Unbearable Whereabouts of Love, 2014. From the series My Eternal Soul. (© Yayoi Kusama)

I first met—or perhaps I should say saw—Kusama Yayoi in 1976, a few years after she had returned to Japan from the United States. Attending an exhibition of some small collages of hers at a gallery in Ginza, I spied her diminutive form huddled in a corner. I was young and unknown and too intimidated by her celebrity (including rumors of shocking “happenings” and other scandalous doings in New York City) to approach her. But the impact of the work I saw on that occasion was life changing. The profound lyricism and almost electrifying sensuality of her canvases instantly vanquished my prejudices. 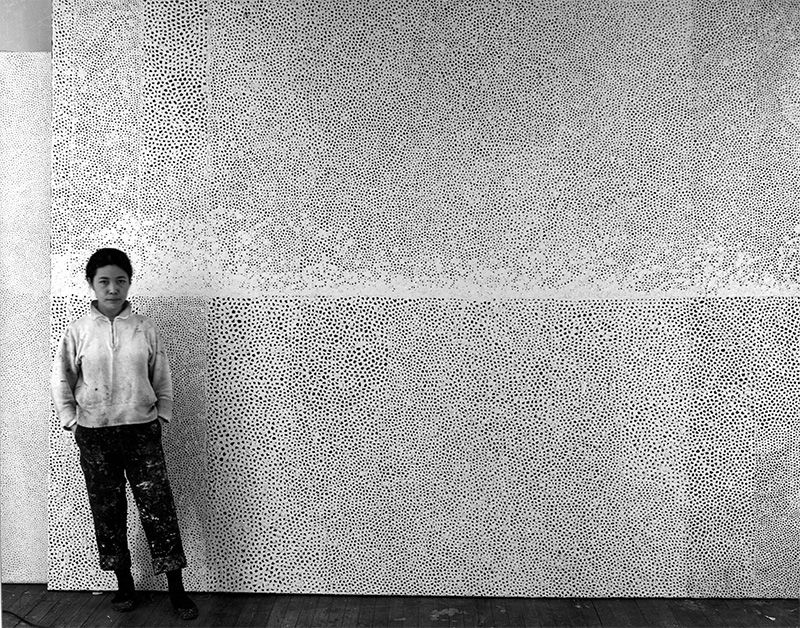 Kusama in her New York Studio in 1961 with several large Infinity Netspaintings covering the wall behind her. (© Yayoi Kusama)

I began working as a curator soon after that, and for the rest of my career I dedicated myself (with a zeal some must have found amusing) to the mission of restoring this renegade genius to a place of honor in the international art community—not as an isolated outsider, as she was frequently characterized, but as a pivotal figure in the development of postwar art. It was not that others failed to appreciate Kusama’s special qualities but that they defined her contribution as that of as an “interesting” provocateur and no more.

Today, I am happy to say, Kusama has finally secured widespread recognition as an artist deserving of such epithets as “great” and “sublime.” This is partly because her work, far from declining in vigor, has actually scaled a second summit since she entered her ninth decade. But it is also because her longstanding message of “forever love” has taken on new importance and significance at a time when intolerance and hate are on the rise everywhere. 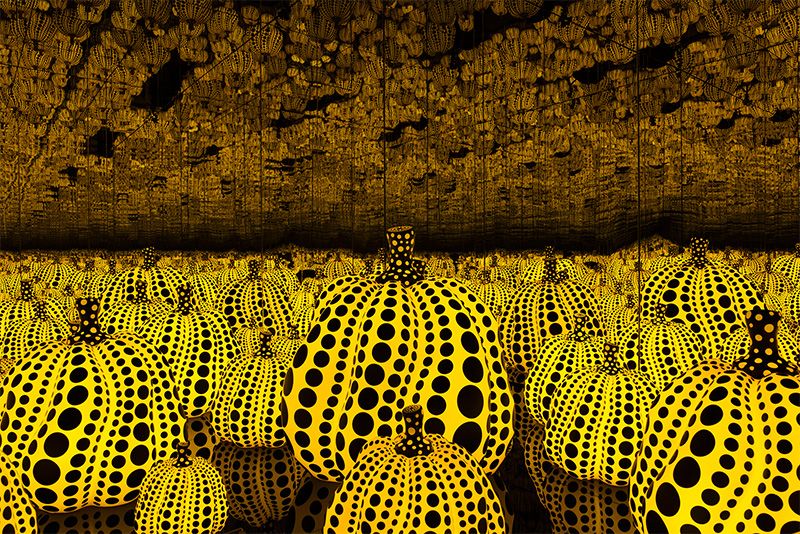 All the Eternal Love I Have for the Pumpkins, 2016. From the series Infinity Mirror Rooms. (© Yayoi Kusama)

The Avant-garde for All

As I suggested above, Kusama Yayoi’s art, with its message of boundless love, is inextricably tied up with her private obsessions and compulsions. Even as a child, Kusama was assailed by frightening hallucinations in which a floral pattern proliferated and filled up the room until she herself was obliterated. She seems to have found relief in a kind of intuitive art therapy, drawing and painting the very visions that terrified her. The repeating dots and web-like patterns for which she is renowned cropped up in her artwork as early as elementary school.

The large-scale Infinity Nets paintings of Kusama’s New York years, noted for their “simple yet complex” latticework of tiny forms, can be seen as products of this longstanding kenophobic compulsion to fill up empty space. At the same time, the “all-over” style of this series, with its uniform treatment of the picture surface, coincided with an important phase in the New York school of contemporary painting, a transition between action painting that highlighted dynamic brushstrokes and the spare minimalism of the 1960s and early 1970s. This is evidence that Kusama was no isolated eccentric sealed up in her own shell but a legitimate historical actor channeling the dialectic forces that propel the development of art.

Similar observations apply to Kusama’s Accumulations, another well-known group of artworks from Kusama’s New York years. With their reuse of everyday objects, these soft-sculpture furnishings and installations presaged key developments in the Pop art movement. At the same time, the disturbing sexual imagery of the phallic forms encrusting the surface of these objects was a highly individual feature, speaking strongly to Kusama’s own personal obsessions. 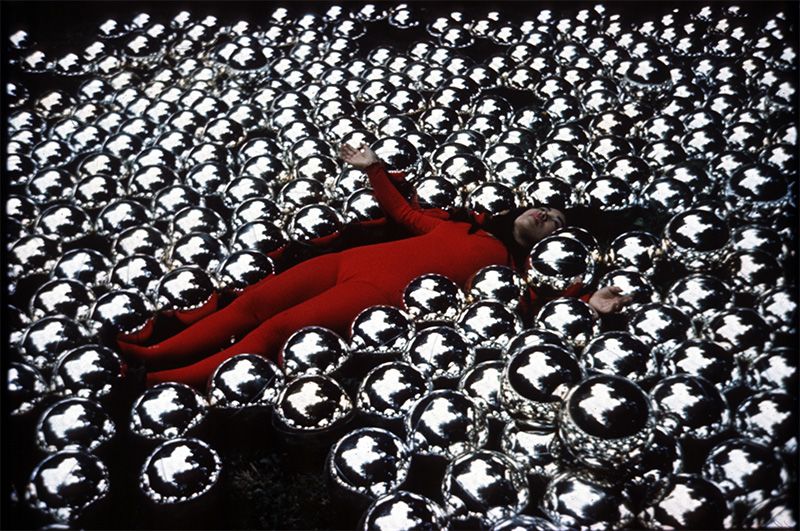 Narcissus Garden, 1966. For this installation-cum-performance staged at the 33rd Venice Biennale, Kusama placed 1,500 mirror balls on the lawn and sold them individually to visitors in a satirical comment on the commercialism of the contemporary art scene. (© Yayoi Kusama) 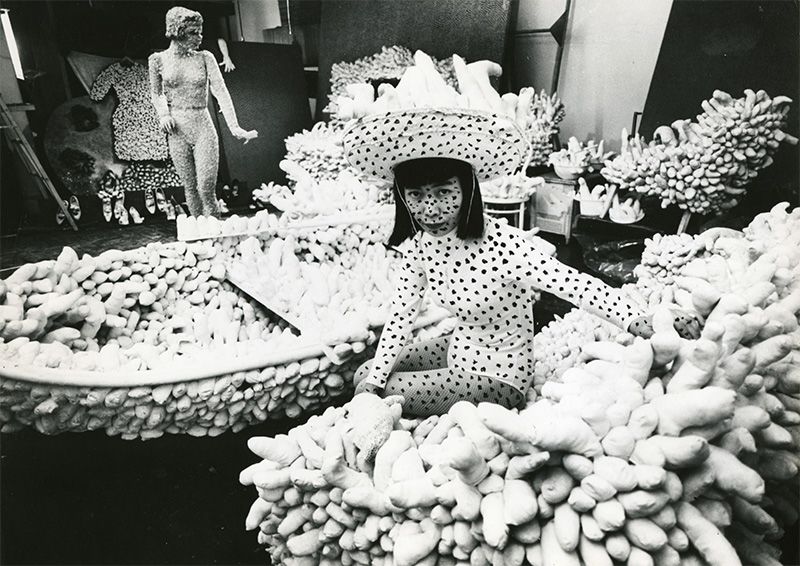 Kusama in her New York studio in 1963, surrounded by her soft sculptures. (© Yayoi Kusama)

As this suggests, the desire to find release from oppressive feelings and visions is clearly an important motive force behind Kusama’s art. But her greatness lies in her ability to sublimate her compulsion into a universal prayer for salvation, for herself and for the world as a whole. Even during the antiwar “happenings” staged in New York in the late 1960s, when Kusama may have appeared isolated from society, she was no alienated outsider but a standard bearer of the “avant-garde for all,” actively conveying the same message of love that she continues to disseminate today. 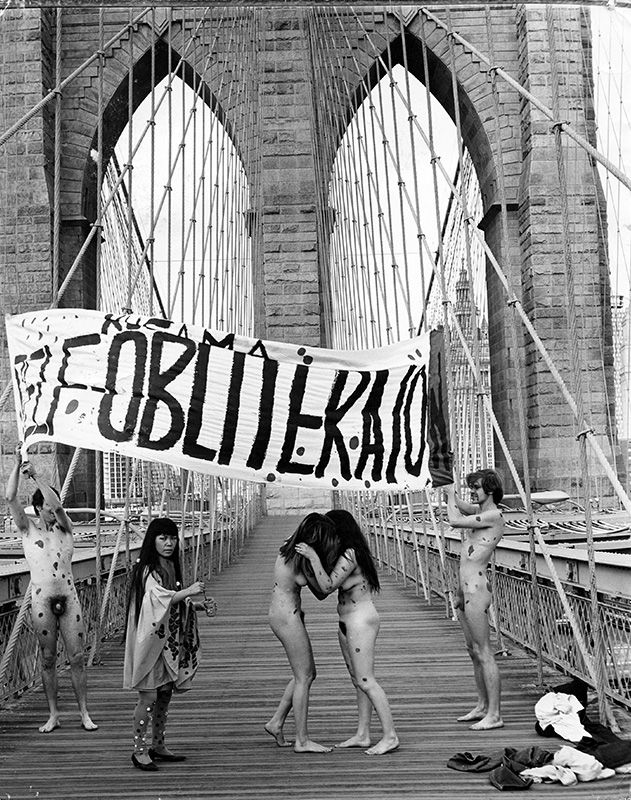 “Anti-War Naked Happening and Flag Burning on the Brooklyn Bridge,” 1968. Kusama has explained that she wanted to call attention to the beauty of the human body and the tragedy of sending young people to die in Vietnam as part of an "antiwar message promoting peace, love, and freedom from the shackles of social convention." (© Yayoi Kusama)

Inspired by the Muse

As she approaches her 88th birthday (in March 2017), Kusama Yayoi is not merely active but more prolifically creative than ever, applying herself to her work with an almost preternatural concentration. Distinctive features of her recent paintings are a sense of composition absent from her earlier all-over style and the appearance of representational subject matter. In addition, the boldly colored series My Eternal Soul—a sharp departure from the monochrome world of her Infinity Nets—positions Kusama as a truly outstanding colorist. A warm, casual intimacy is also on display, both in her self-portraits and in her treatment (expressive of a new pop sensibility) of such everyday objects as hats, eyeglasses, coffee cups, and handbags. One might also call attention to the integration of sketchy and finished brushwork techniques seen in her recent paintings.

To watch Kusama at work in her studio is to witness a process that can only be described as mystical. There is no hint of trial-and-error in her approach to painting. She has no need of preliminary studies or underdrawings but proceeds straight to the final product without hesitation. Her hand moves over the canvas in a manner that appears at first arbitrary and then necessary, as if linked to cosmic forces. 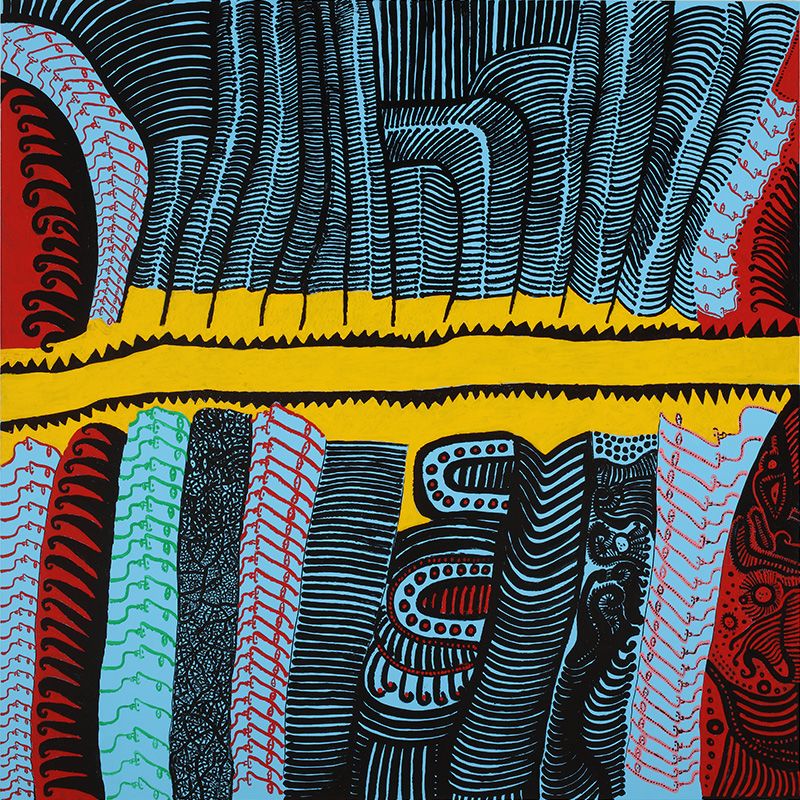 I have heard of a televised interview Kusama gave from her studio as she prepared to begin work on a new canvas. Asked what she was going to paint, she replied, “Ask my hands.” Such a remark evokes the technique of automatism that the surrealists embraced as a way of bypassing the conscious mind and directly accessing the subconscious. However, there is nothing random or accidental in Kusama’s art. It is true that she does no advance planning, but the moment her brush touches the canvas, she can clearly visualize the finished product, and her brush moves continuously as she works, producing one highly original image after another. It is the very picture of an artist inspired by the Muse.

Kusama’s recent paintings seem to alternate between the forthright, whimsical innocence of children’s art and the eerie ambience of an alien spirit world. The same ambiguity imbues much of her sculpture. In her giant flowers, for example, the fanciful vision of a garden in Shangri-La exists side by side with the macabre, almost diabolically fleshy feel of a carnivorous plant.

Kusama herself has said that the devil is both her enemy and her comrade-in-arms. Deep in the heart of her creative genius lurk riddles that continue to resist easy answers. We can be certain only that the whimsical yet disturbing world of Kusama Yayoi will continue to mystify and enchant people for generations to come. 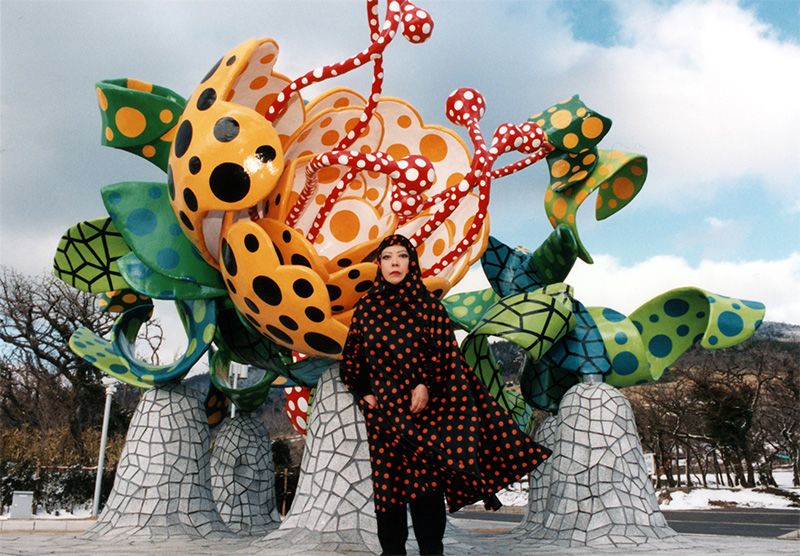 (Originally published in Japanese. Banner photo: The artist at work in her studio. ©Yayoi Kusama.)