Kitano Takeshi: Marching to His Own Creative “Beat”

Culture Feb 6, 2017
Kitano Takeshi has established a unique position for himself, appearing as a popular comedian on Japanese TV while simultaneously winning international acclaim as a serious filmmaker. Meet the unique creator who has for many years lived a double life as mass entertainer and creative artist.

The Man With Two Names

The remarkable career of Kitano Takeshi, a.k.a. “Beat” Takeshi, made headlines again in October 2016 when the director, actor, and TV star was named an Officier in the French Legion of Honor. In awarding the honor, a spokesperson for the French government commented that Kitano’s work “comfortably went beyond the limits of art genres and transformed the rules of performing arts, television, film and literature.” In making the award, the prize committee showed its understanding and appreciation of the complete body work of Kitano Takeshi—one of the finest Japanese filmmakers of his generation, but also a domestic celebrity for decidedly different reasons. While Kitano enjoys international renown as a serious artist, his reputation at home is a little more complicated.

It is perhaps difficult for international audiences, who know Kitano only as a director and actor, to get a sense of his media presence in Japan, for there is another, totally different side to Kitano that has remained largely hidden to international audiences. He was Japan’s most popular comedian for a decade before launching his directing career 28 years ago with Sono otoko, kyōbō ni tsuki (English title: Violent Cop), and even after winning international acclaim, he has continued to combine his work as a comic and all-round entertainer with a second career as an artistically ambitious director and actor, without sacrificing either role. He has maintained this remarkable balancing act for nearly 30 years and remains today a vital presence at the forefront of both his chosen careers.

To achieve such success in fields as different as comedy and directing would be impressive enough. But Kitano’s achievements go beyond that. Before he became a director in his own right (performing as an actor in most of his films) he built a reputation for himself as a distinctive on-screen presence in a variety of Japanese and foreign-made films, starting with Senjō no Merī Kurisumasu (Merry Christmas, Mr. Lawrence), directed by Ōshima Nagisa in 1983. In addition to writing and acting in numerous dramas on Japanese TV, he has also worked as a radio DJ and is all but ubiquitous on TV in entertainment shows and commercials. He has also written novels and held exhibitions of his artworks. 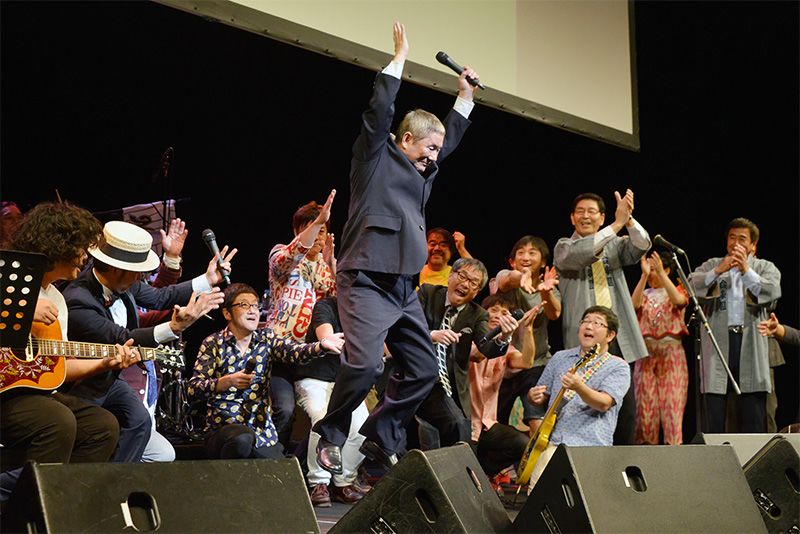 Takeshi sings along with fellow performers on the “Beat Takeshi Respect Live” concert on September 22, 2015, as part of the Eighth Shitamachi Comedy Film Festival, where he was given an honorary life achievement award. © Jiji.

If all the short-term projects he has been involved in were included, the list of his achievements would be longer still. But at the risk of oversimplifying, I believe his work can be divided into two broad categories: “mass appeal,” typified by his TV appearances as a comedian, and “artistic,” notably his work as a film director. Kitano himself differentiates between these two strands by using the name “Beat Takeshi” for his celebrity appearances and “Kitano Takeshi” when he is working as a serious artist, although the line between the two is not always clear cut. Kitano’s career has always been driven by the two wheels of popular appeal and artistic integrity, and he has been remarkably successful at balancing the competing demands of these two different spheres. Indeed, it’s tempting to think that he might not have enjoyed such a long and successful career if one side of the equation had been lacking.

The Pressures of Being a TV Star

For obvious reasons, the work of a comedian is generally consumed only within a domestic context. The only comedians who enjoy worldwide popularity are from the United States—for the simple reason that the United States is the only country whose “domestic” context is shared by the rest of the world. (Of course even in America there are many comedians whose work depends on a highly domestic context, and whose work does not generally travel well.) It would be harder to imagine a more typically “Japanese” environment than the one in which Kitano Takeshi got his start—as an elevator boy living and working in a strip-club cabaret in Asakusa, Tokyo, in the early 1970s.

It was in the early 1980s that he started to attract widespread attention as “Beat Takeshi,” rising to nationwide popularity on TV as one half of the manzai comedy duo the Two Beats. In discussing Kitano’s position in the Japanese entertainment world, it is important to remember that he has been a major figure in television comedy since the early 1980s, almost 10 years before he made his debut as a movie director. Television was far more influential than film, music, or other genres in Japan at the time: anyone who was a star on TV was at the very peak of domestic popular culture.

Kitano made headlines repeatedly in the years that followed, including through several controversial off-screen events. In 1987 Kitano and a group of friends launched an “attack” on the offices of Friday, a celebrity gossip magazine, incensed by the magazine’s invasive and scurrilous reporting. In 1994, he nearly lost his life in a near-suicidal late-night motorcycle accident. These events suggested that Kitano was frustrated by the remorseless pressures of Japanese television celebrity and was longing to escape—an impression that was confirmed by Kitano’s own comments in subsequent years.

In the end, he survived both his commercial attempted “suicide” in 1987 and his physical near miss in 1994. Both incidents forced him to take a lengthy break from the entertainment industry, but both times he catapulted to the top of the table as soon as he returned.

In retrospect, Kitano’s decision to look for new challenges as a filmmaker in the 1990s seems almost inevitable. This new career allowed him to move beyond the goldfish bowl of television and seek new pastures in the wider world outside Japan. Like the filmmaker John Cassavates (and many others today), who used to act in commercial films to fund his personal and artistic works, Kitano decided to maximize the commercial value of his Beat Takeshi persona and use that to make more artistically ambitious works that came from a place where no one could interfere with his intentions or tell him what to do. He would often shoot several weeks’ worth of TV shows at once to earn time for his other projects. His unassailable position as a celebrity helped him to get away with this approach, along with the fact that his films were financed mostly by himself and his studio.

Not Just Big in Japan

Initially, his films flopped and were almost totally ignored by the critics. (At least that is the impression Kitano himself likes to give, although in fact critics even in Japan recognized the originality of his work almost from the outset.) A major shift in the critical consensus came in 1997, when Hana-bi (Fireworks), his seventh film as a director, won a Golden Lion at the Venice Film Festival. Since then, he has been known as a major figure in international cinema while maintaining his mass-appeal status. 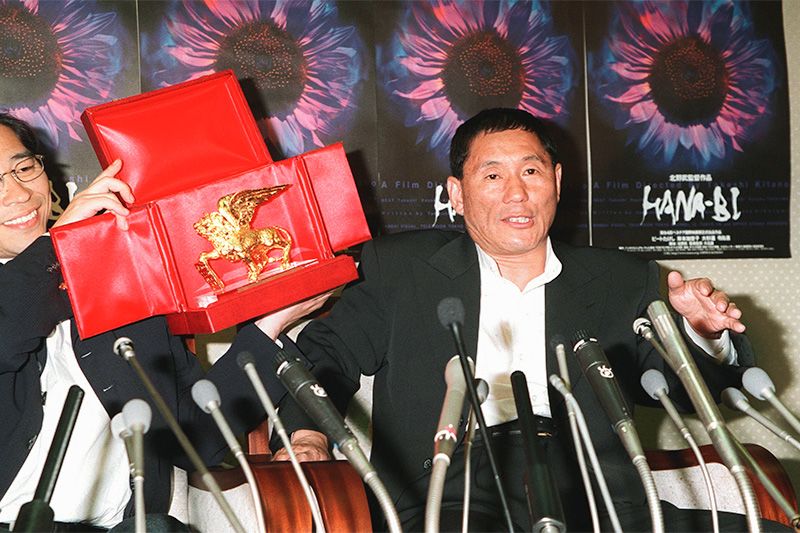 At a September 9, 1997, press conference at Narita Airport following his return to Japan after winning a Golden Lion at the Venice Film Festival. © Jiji.

Kitano was not the only Japanese celebrity looking to broaden his horizons at the time. A number of musicians and writers tried their hand at directing films, but most made just one or two films before quitting in disappointment. Kitano’s works existed on a totally different artistic level than anything these other celebrities managed to create. From the outset he had a clear aim: to create a context for himself in which he could continue to make films alongside his television work. This creative environment was crucial to his success. It enabled him to carry on with the works he wanted to make without the need to compromise. He was happy to wait for the world to recognize his talents.

And although he has rarely spoken about his influences, his work makes it clear that he has seriously studied the classic films of Hollywood and Europe. Despite (or perhaps because of) his ubiquitous presence on Japanese TV, he has always been humble about his place in film history. This deep understanding of the history of his chosen form is perhaps the thing that marks him out most from the other celebrity dilettantes.

As he came to understand his métier, Kitano became increasingly aware of the importance of a distinctive, individual style as a director. Many of his works in the early stage of his career were marked by a unique sense of color that at first came spontaneously and later became known to film-fans around the world as “Kitano blue.” Starting with Dolls in 2002, Kitano worked deliberately to strip his work of this trademark tint—evidence, if any were needed, of the artist’s determination not to coast on the international reputation he had established but to grow and improve as a director.

I do not have the space here to discuss all the changes in Kitano’s work over the years. At least until his middle period, his work was marked by a strong sense of pessimism and an urge to escape. This perhaps came from Kitano’s long years as a leading light in Japan’s claustrophobic television world. Knowing nothing of his television career, international critics and audiences were able to enjoy his films without any preconceptions. They were delighted by the freshness, power, and poeticism of Kitano’s vision, which seemed to appear out of nowhere.

Kitano recently announced that he had completed filming his eighteenth film, Outrage: The Final Chapter, the third and final part of a hit series that seems to come from a place where the mass appeal and artistic merit that have characterized Kitano’s bifurcated career seem to converge. Back in the 1990s, it is unlikely that Kitano would have dared think that he might ever make a hit film, let alone a trilogy. It could be that Kitano, who turned 70 in January 2017, has arrived at a place where the two contrasting elements of his oeuvre can finally be brought together as one powerful whole.