Culture Sep 29, 2017
For many years, Ono Yōko’s putative role in the breakup of the Beatles overshadowed her own achievements as an artist and activist. Now all that is changing. Art critic Kusumi Kiyoshi adds his own insights to the ongoing reappraisal of this much-misunderstood Japanese legend.

In June 2017, the National Music Publishers Association announced that Ono Yōko would be officially credited as co-writer of the 1971 John Lennon song “Imagine” in accordance with John’s own wishes, revealed in a 1980 interview.

The anti-war anthem “Imagine,” in which we are urged to picture a world with no heaven or hell, no religion, and no countries, has taken its place among the iconic songs of John Lennon’s post-Beatles period. But Ono’s influence on the lyrics was never exactly a secret. Near the bottom of the back cover of the 1971 John Lennon album Imagine are printed the words “imagine the clouds dripping, dig a hole in your garden to put them in. Yoko ‘63.” It is a classic example of Ono’s “instruction painting.”

Instruction painting was a unique genre of conceptual art invented by Ono herself. Each work consisted of nothing but a brief set of written directions for creating or performing one’s own work, most often in one’s imagination. She described it as “painting to be constructed in your head.” Most of the instructions are almost haiku-like in their minimalism, and many defy rational contemplation, much like a Zen kōan.

Ono’s book Grapefruit, a compilation of such works, begins with the instruction “Burn this book after you’ve read it.” It concludes with a blurb by John Lennon: “The best book I’ve ever burned!” As this playful interaction suggests, no one grasped Ono Yōko’s art better than John Lennon. Aesthetically the two were kindred spirits, completely attuned in their blend of seriousness and humor. After the Beatles dissolved, Ono replaced Paul McCartney as John’s major musical collaborator.

Ono Yōko was born in 1933 to a wealthy Tokyo family. Her father was a banker, and her mother was the granddaughter of zaibatsu founder Yasuda Zenjirō. Several members of the extended family were active in the arts. Before World War II, when she was still a small child, she spent a number of years in the United States, where her father was posted. After the war, her father was transferred to New York, and the family followed when Ono was a college student in the early 1950s. The cultural milieu in which Ono found herself as a young woman, at a time when relatively few Japanese had the opportunity to live overseas, was to have a decisive impact on the course of her life.

Salonniere to the Avant-Garde

In time Ono took up with composer Ichiyanagi Toshi, then a student at Juilliard, and the two married in 1956. Her marriage brought her into contact with members of the New York avant-garde, including composer John Cage and “happening” pioneer Allan Kaprow, and she became a devoted follower of experimental art.

For about a year, beginning in 1960, Ono used her Manhattan loft as a gallery space for young artists and a salon where such luminaries as Max Ernst and Isamu Noguchi could meet and interact.

In the mid-sixties, she took part in Fluxus, an interdisciplinary experimental artists’ group cofounded and coordinated by George Maciunas. On one occasion Ono astonished her fellow members by bringing the famed Marcel Duchamp to one of their meetings.

Ono’s social skills and prowess as an arts organizer doubtless owed much to her cultured upbringing. In the 1960s, she put those abilities to use on the New York avant-garde scene. In the 1970s, she channeled them into rock music. From the 1980s on, she treated all of society as her stage.

Much of Ono’s career has been clouded by misunderstanding and prejudice. She returned to Japan in 1962, only to find the arts community there hostile and unaccepting. Her relationship with John Lennon, which began in 1966, brought her global notoriety as Beatles fans blamed her for the band’s breakup, and the tabloids fed their resentment with ugly rumors. She became a household name, but for years that name was associated primarily with gossip-sheet scandals and the negative popular image of avant-garde art. 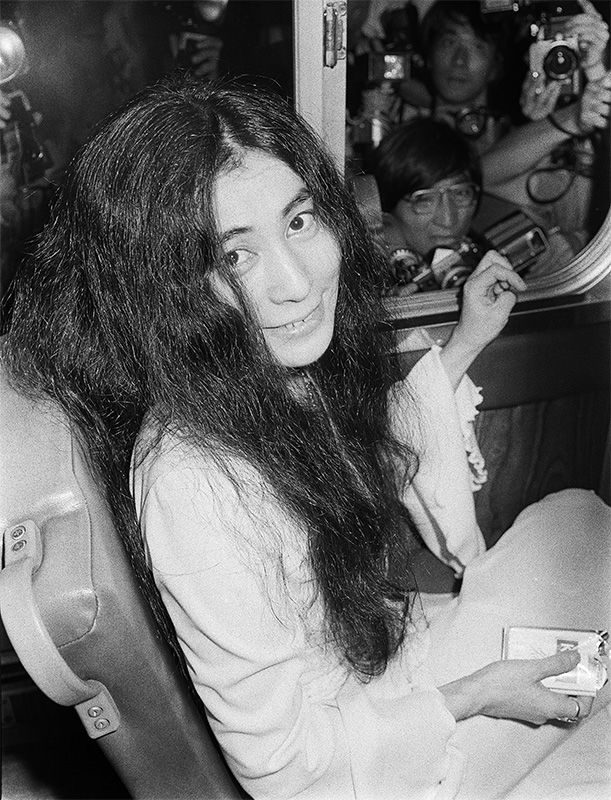 But Lennon and Ono—or “John and Yoko” as they were known in the West—put their notoriety to work for a good cause. By leveraging the mass media’s appetite for gossip, they were able to reach far more people with their social message than Ono ever could have as a solitary artist. From their 1969 Bed-in for Peace, in which they engaged members of the press from the bed of their hotel room after their wedding, and their “War is Over! (If You Want It)” billboard advertising campaign of the same year to their 1971 anti-war Christmas song “Happy Xmas (War is Over),” the couple’s contribution to the peace movement of the Vietnam era remains indelibly engraved in the memories of those who lived through those years. 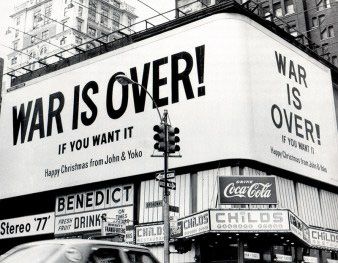 The “War Is Over!” campaign was initially launched by John Lennon and Ono Yōko on December 15, 1969. http://imaginepeace.com/warisover/

In her social activism, as in her artistic endeavors, Ono Yōko was multifaceted and considerably ahead of her time. As early as the 1960s, she was demonstrating principles and practices that have only gained near-universal acceptance in the current century.

For example, Ono took up the banner of racial diversity, gender equality, and multiculturalism long before they became mainstream. The Fluxus movement itself was a haven for minority artists, including immigrants, African Americans, Asians, and women, at a time when the New York art scene was still very much dominated by white males. In time, the spontaneous ebb and flow signified by the group’s name gathered momentum and became an irresistible tide. 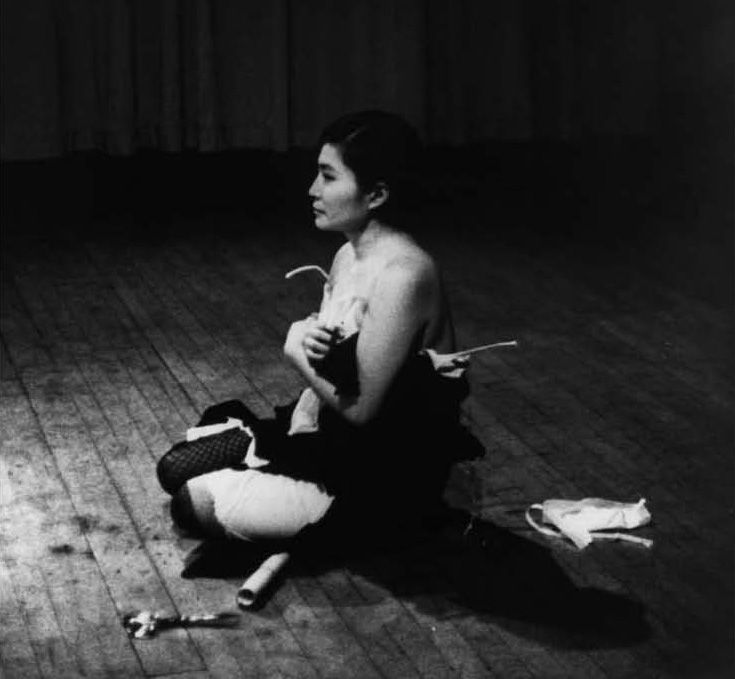 Ono’s 1964 Cut Piece catapulted her to fame in the world of the avant-garde. In this disturbing performance, Ono sat passively in the middle of the stage, while members of the audience came up and gradually cut her clothing to shreds with a pair of scissors. In this context the act of cutting suggested a kind of twisted collusion between the observer (audience) and the observed (artist), the latter made all the more vulnerable by her social disadvantages as a young and unknown Asian woman. Using her own body as a badge of that identity, she exposed the unconscious sexual violence at the heart of visual art, with its fundamental orientation to the male gaze. Later, through the medium of the Plastic Ono Band and its songs of women’s liberation, she fed a similar message into the amplifier of rock music and broadcast it to youth culture. Not only did Ono’s art and activism influence the subsequent development of feminism but the lifestyle that she and John adopted on the basis of their beliefs—with John in the role of househusband and stay-at-home dad—has since been embraced by countless others and altered society’s attitudes toward gender roles. 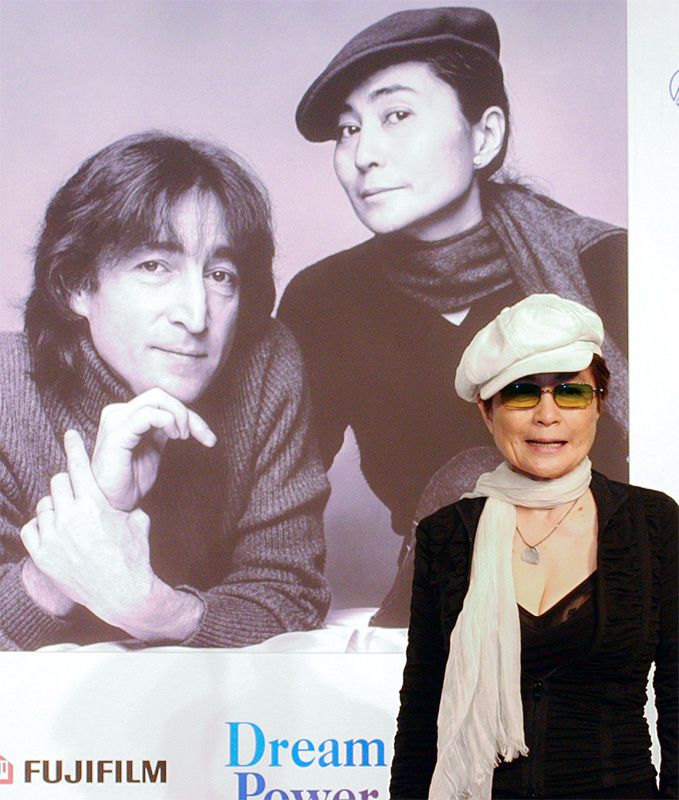 Ono Yōko at a Tokyo press conference in advance of her October 7, 2005, concert at the Nippon Budōkan marking the 25th anniversary of John Lennon’s death. (© Jiji)

Ono Yōko’s ideas and conduct may have been too advanced for the twentieth century, but today she is finally getting some of the positive recognition she deserves. At long last the world seems to be catching up to Ono’s imagination.

Consider her consummate use of Twitter as a mouthpiece. This in itself is not particularly surprising. In the pre-Internet era, Ono broadcast her message using the full range of media at her disposal—art exhibitions, performance art, film, the telephone, printed books, recordings, concerts, billboards, newspaper advertising, and so on. One would fully expect her to make use of the Internet and social media now that they are available. What is interesting is the way she anticipated the 140-character format of Twitter some 50 years before its advent with her haiku-like “instructions.” Already versed in this terse mode of self-expression, she took naturally to Twitter as a way of getting her message out, and today she has several million followers.

Ono’s vision of art as something by and for everyone, not just the privileged elite, was also highly prophetic. She and Lennon were fond of citing Marshall McLuhan’s axiom “the medium is the message,” but Ono also liked to expand on the concept by saying that everyone has a message, and the message itself is a medium. The idea of opening art up to the masses calls to mind Andy Warhol, who went so far as to predict that “in the future, everyone will be world-famous for 15 minutes.” At the same time, Ono’s vision evokes the remote origins of art in the work of countless unknown painters, sculptors, and potters.

Ono’s concept of art is embodied in her Wish Trees installations, living trees to which visitors tie strips of paper inscribed with their fondest wishes. Through this project, she gives shape to the invisible hopes and dreams that human beings cherish in their hearts and brings them together. As Ono says, “A dream you dream alone is only a dream. A dream you dream together is a reality”—a statement that surely reflects her ideas about art as well. The collaborative audience-participation approach goes all the way back to her seminal Cut Piece, but now the message is a hopeful, positive one. 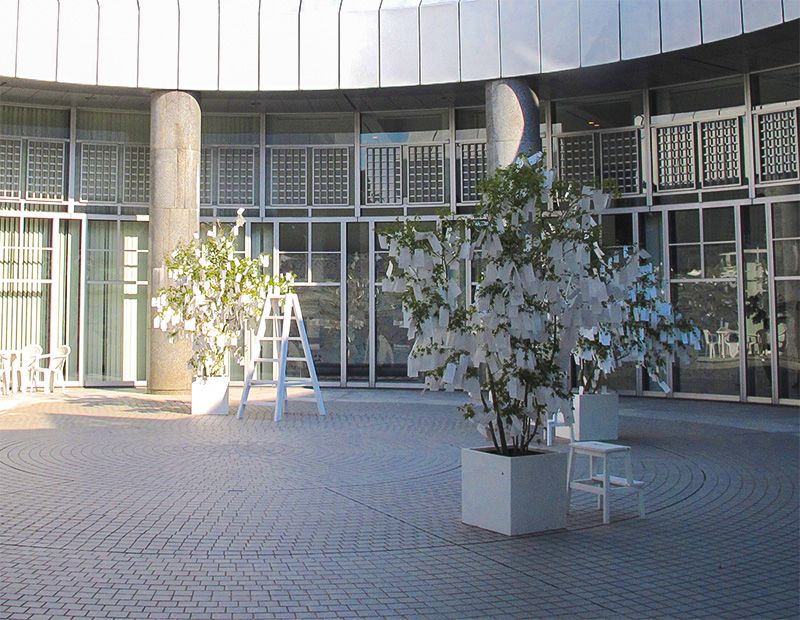 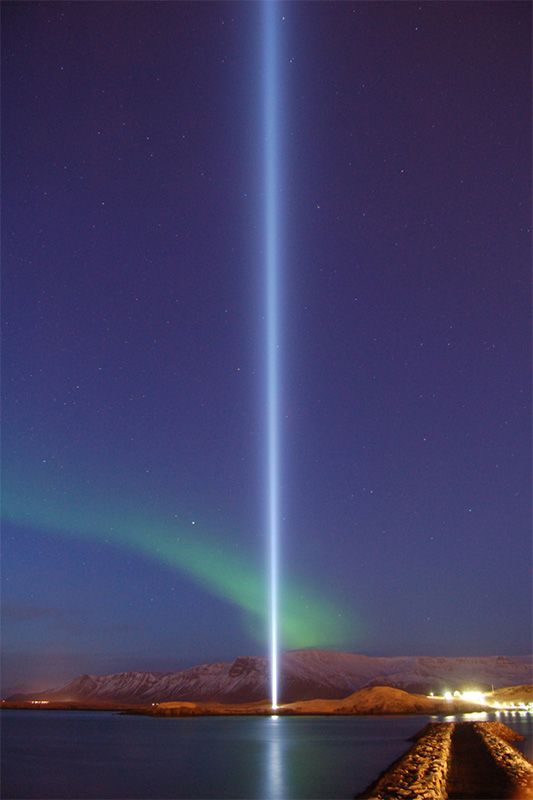 The Imagine Peace Tower in Reykjavik, Iceland, where the wishes tied to Ono’s wish trees are buried.

The Imagine Peace Tower, built on an island off of Reykjavik, was completed in 2007. Conceived by Ono, this memorial to John Lennon consists of a white stone structure equipped with searchlights and prisms that project a tall pillar of light into the night sky. Here the universal desire for peace finds visual expression in the column of light reaching straight upward into the heavens. With the help of modern technology, the tower realizes the “intermedia” aims of the Fluxus artists, but on a much larger scale.

In retrospect, Ono emerges as one of the early pioneers of media art. She brings to mind also the medium who channels messages from the spiritual realm to those who are still in the world of the living. This kind of intermediary role is one Ono Yōko has played time and again over the years, building channels of communication between individual artists, between the family and society, between art and music, between the avant-garde and popular culture, between the twentieth century and the twenty-first. In this sense, Ono Yōko herself is both a medium and a message.

(Banner photo: Ono Yōko at the exhibit John Lennon: The New York City Years at the Rock & Roll Hall of Fame Annex in Manhattan, May 2009. © AP/Aflo.)