Arts Music Jan 8, 2019
Akiyoshi Toshiko is a world-renowned jazz pianist and the only Japanese musician to have received the prestigious National Endowment for the Arts Jazz Master Award recognizing jazz legends. She has been based in the United States since 1956.

It is common for Japanese musicians today to divide their activities between Tokyo and New York or other music centers around the world. But the practice was all but unheard of in the 1950s and 60s. One of the first performers to manage it was jazz pianist Akiyoshi Toshiko.

Born in 1929 in Japanese colonial ruled Manchuria, Akiyoshi first took up the piano while still in the first grade. At the end of World War II she repatriated with her family, settling in Ōita Prefecture. She started performing professionally at 16, working as a jazz pianist at a US military base in the famous hot springs town of Beppu. Following the advice of a musician friend, she moved to Tokyo in 1948. At the time the city was bustling with occupation troops. The camps housing military personnel had various nightly entertainment, and there was plenty of work for anyone who could play a musical instrument. Akiyoshi threw herself into this strange and exciting world.

“Tokyo was teeming with bands in those day,” remembers Akiyoshi. “Unlike now when many performers are freelance, musicians generally played in just one group. The city was full of dancehalls—some for Japanese, some for the Americans—so there was a huge demand for musicians. Most of the Japanese players had previously been in military bands. The younger guys among them were the kingpins of the scene, along with a few musicians who’d played in Shanghai and places like that.”

Although performing regularly, Akiyoshi was not satisfied with this kind of work. Looking for a different sound, she immersed herself in the latest records from the United States, and in this way honed her ear for authentic jazz performance.

The music scene in Japan at the time was dominated by dance-oriented styles like swing. Bebop and the other forms of modern of jazz that had started to appear in the United States during the war years had yet to make much of an impact on the other side of the Pacific. Most Japanese musicians were yet unclear about the theory and structure behind the new music. Akiyoshi was at the center of a group of passionate young performers who tried to unlock the secrets of these new styles. She traveled regularly to jazz cafes, listening to the latest imports and trying desperately to copy what she heard. However, the new sound did not go over very well at first. “The audiences in the clubs hated it,” she notes wryly. “I got fired from so many gigs over that.”

Undeterred, she put together the Cozy Quartet, a group that later included young saxophonist Watanabe Sadao, to play the latest styles. “There wasn't any money in it, but that didn't matter. The joy of performing the kind of music we wanted to play was more important.”

A Fateful Meeting with Oscar Peterson

Akiyoshi’s big break came in 1953 when some top American musicians traveled to Japan for a series of performances under the title “Jazz at the Philharmonic.” One of the artists on the tour was legendary pianist Oscar Peterson.

“There was nowhere in Japan in those days where you could really just sit and listen to jazz being performed,” reflects Akiyoshi. “It was just dancehalls everywhere. The first dedicated live venue, what they used to call a “jazz cafe,” was the Tennessee Coffee Shop that opened in October 1953 in Nishi-Ginza. My band used to play there. Watanabe Sadao had just joined us at the time. He would have been still a teenager then.”

On one of those nights, Oscar Peterson came to hear them play.

“He really enjoyed my performance, and was kind enough to recommend me to the producer Norman Granz. That led to an opportunity to make a recording.”

The record, Toshiko’s Piano, was released in the United States and led to an invitation for Akiyoshi to study at the Berklee College of Music on a full scholarship. 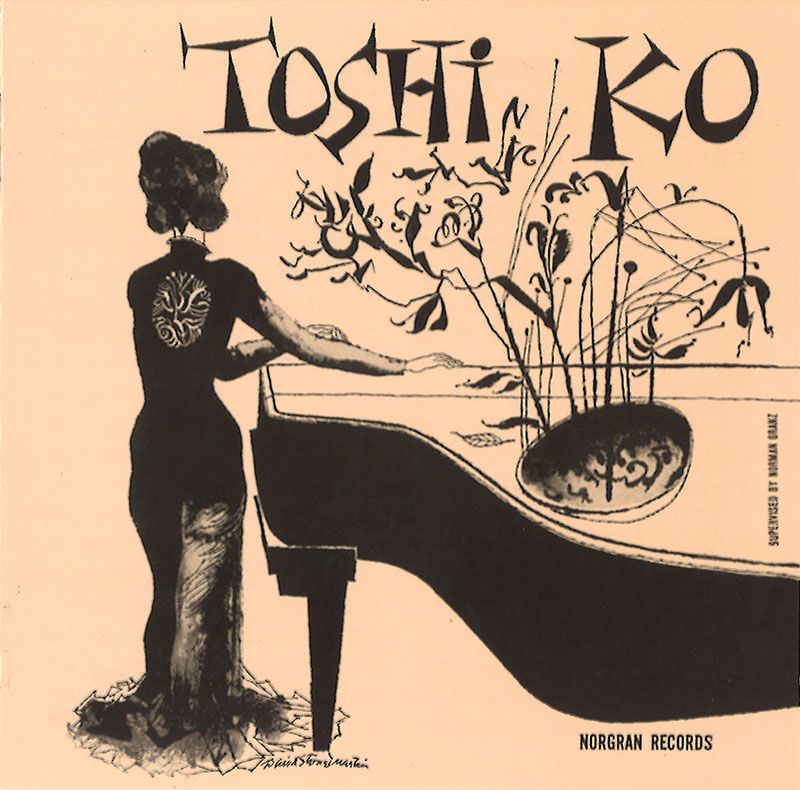 “The album came out in the States in 1954,” says Akiyoshi. “At the time, the mere fact of a Japanese person playing jazz was unusual—never mind a Japanese girl.” Despite the honor at the famed institute, Akiyoshi remains humble. “I think in a way that Berklee offered me a place for promotional reasons. It was still a small school, around 340 students, and wanted to boost numbers. I was good for publicity. I don't think I’d have gotten in without that record.”

Perhaps so—but the opportunity to study in the United States was also a recognition of Akiyoshi’s very real and burgeoning talents. As she says, the sight of a young Japanese woman playing unrestrained, cutting-edge bebop drew attention, and soon she was creating a stir in the music’s homeland. While still a student, she appeared at the Newport Jazz Festival and played at the famous Boston nightclub Storyville. After graduation, she moved to New York and started life as a full-time professional musician.

“I mostly played with my own trios and quartets, and also got to play with people like Charles Mingus, the great bassist, and his group.”

The next major turning point in her career came in 1973, when she and her husband Lew Tabackin formed a group, the Toshiko Akiyoshi–Lew Tabackin Big Band.

“Lew at the time had a job playing on TV for The Tonight Show. They switched the recording venue for the program from New York to Los Angeles, so we moved out to the West Coast. There were a lot of studio musicians in LA, but it wasn’t really a big jazz city in those days. Still, there were rehearsal rooms in the Musicians Union that you could hire for three hours for 50 cents.

“I did my first solo concert at the Town Hall in New York in 1967. Around that time, I wrote five new compositions with a big band in mind. Lew knew I’d written these pieces, and one day he told me that we should put a record out and that he’d find the musicians. So that’s how the big band got started. But in the beginning, none of us had any idea that this would be our main work. But word eventually got around, and more and more work started to come in.”

Akiyoshi decided that as a general rule the big band would play only her own compositions—a testimony to her pride and confidence in her abilities as a writer. Her first big band record, Kogun, caused a sensation in Japan, and did well overseas when it received an international release some time later. The record won various awards, and led to invitations to play major venues around the world. 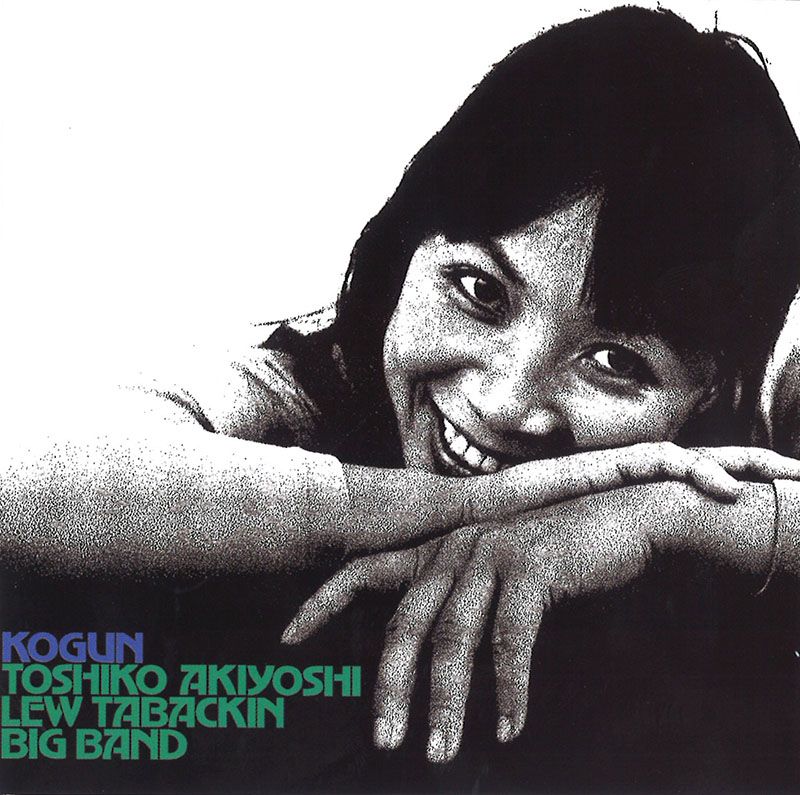 Kogun, the first album by the Toshiko Akiyoshi–Lew Tabackin Big Band, released in 1974.

Akiyoshi has continued to pour herself into her work as one of the world’s leading jazz musicians. In 1999, she became the first Japanese musician to be inducted into the International Jazz Hall of Fame, and in 2006 she received the National Endowment for the Arts Jazz Master Award, considered the most prestigious accolade in jazz. Despite recently turning 89, Akiyoshi shows no sign of slowing down and continues to delight audiences around the world over with superlative performances. 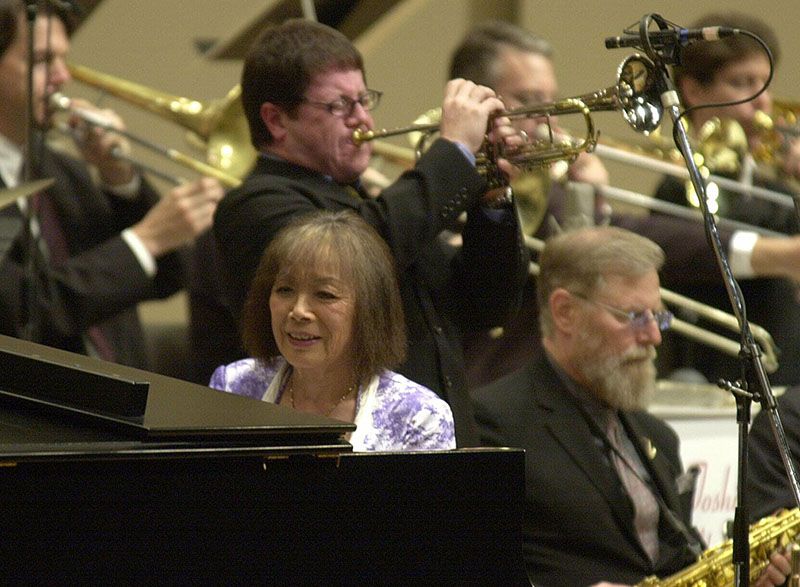 Akiyoshi performs “Hiroshima: Rising from the Abyss” at a concert for world peace on August 6, 2001 at the Hiroshima Kōsei Nenkin Hall, Hiroshima, marking the first anniversary in the twenty-first century of the Hiroshima atomic bombing. (© Jiji)