Kanji of the Year: “Kita” the Northern Winner for 2017

Culture Dec 12, 2017
In a year of political action at home and uncertainty on the international front, the Japanese public decided that 北 (kita or hoku), meaning “north,” was the kanji best expressing what 2017 meant to them. Read on to learn why and to see the top 10 finishers in this year’s Kanji of the Year competition.

The winner of the annual competition is determined by members of the public, who vote for the character that best encapsulates the year that was. The top vote-getter is announced on December 12, a date whose 12/12 numbers can playfully be read ii ji ichi ji, or “one good character,” and unveiled in a public calligraphy demonstration at the Kyoto temple Kiyomizudera by the head priest, Mori Seihan. 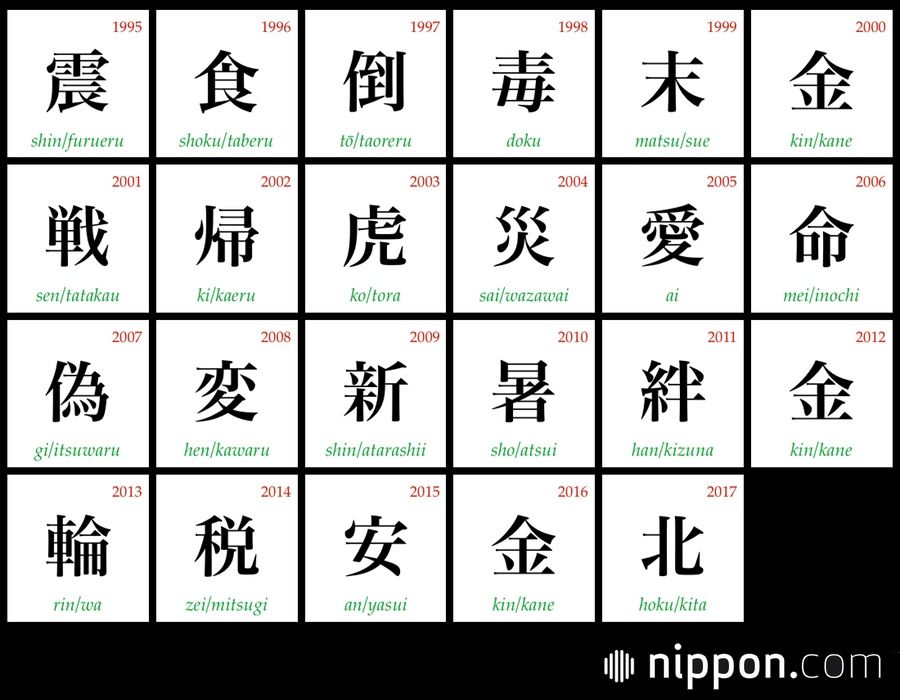 Kita was the clear winner this year, with 7,104 votes out of the total 153,594 cast. In comments appended to their ballots, participants described various reasons for their choice. Topping these was the series of missile launches by North Korea that kept Japan on edge as projectiles splashed down into its exclusive economic zone or flew over the Japanese islands. Also mentioned were the torrential rains that brought flooding and landslides to northern Kyūshū and the poor potato crop in the northern prefecture of Hokkaidō that led to shortages of potato chips, vexing the nation’s snack-lovers.

Also featuring in voters’ explanations for their choice were baseball players from a northern Japanese team—Ōtani Shōhei, the combination pitcher/slugger from the Hokkaidō Nippon Ham Fighters who just this month announced he was heading to the Major Leagues to play for the Anaheim Angels, and high-school phenom Kiyomiya Kōtarō, a first-round draft pick by the same Sapporo team.

Coming in second place with 3,571 votes, around half the number of the top pick, was 政 (sei/matsurigoto), meaning “politics.” Political scandals dominated the news for much of the year, and elections in July for the Tokyo Metropolitan Assembly and the National Diet’s House of Representatives in October gave this character a high profile.

The third-place finisher was 不 (fu, bu), meaning “not” or “negative.” Voters noted the negative factors affecting Japan on the international stage, such as the North Korean missile tests, as well as the 不倫 (furin, illicit affairs) appearing in celebrity news, the 不作 (fusaku, poor harvests) impacting farmers, and the 不気味 (bukimi, disturbing) crimes that came to light, notably the murder and dismemberment of nine victims by a Zama, Kanagawa, man.

Below we present the top 10 finishers for 2017. (Originally written in English. Banner photo: Mori Seihan writes 北, the kanji of the year for 2017, at Kyoto’s Kiyomizudera on December 12. © Jiji.)