Economy Mar 28, 2018
Japanese wines are now holding their own against inexpensive imports in supermarkets as consumers find growing appeal in knowing about and identifying with the stories of producers close to home. Big data is increasingly being used to help in the field of viniculture. We visited Yamanashi and Nagano Prefectures at harvest time to learn more.

Yamanashi Wine with an IT Twist

A Tokyo couple in their seventies are visiting the Okunota Winery in the city of Kōshū, Yamanashi, to sample its wares. “Oh, this has a wonderful aroma. It would make a nice aperitif too,” they remark. After trying out several samples, they buy eight bottles of wine, two each of four different varieties. They’ll be stocking their wine cellar, “keeping one bottle of each to age, in order to enjoy the taste difference later,” they say.

Early October is grape harvest time in the Enzan and Katsunuma areas, east of the Kōfu valley. This is where Japan’s first wines were produced in the late nineteenth century. Today the Okunota Winery is at the cutting edge, using information technology to manage grape-growing using sensors and wireless networks. These tech advances have brought the side benefit of dramatically reduced pesticide use. 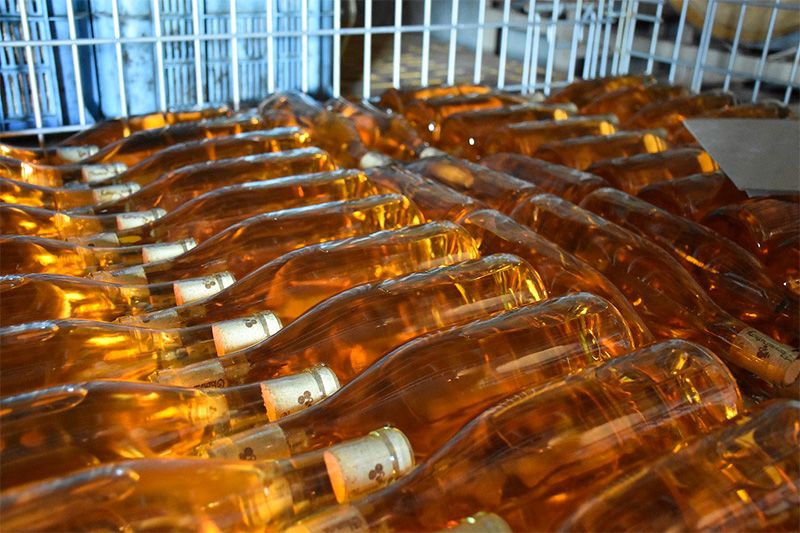 Wine from Okunota Winery, bottled and ready for shipment.

Okunota winery President Nakamura Masakazu explains that he began using IT simply because he wanted to improve the quality of his wine; going pesticide-free was not his primary goal.

While studying microbiology at the Tokyo University of Agriculture, Nakamura became convinced that improving the microbiological environment of the fields could help produce quality wine. Since launching his grape-growing operations in 1998, he has concentrated on preserving the soil’s microbiological environment so that minerals can be absorbed deep in the soil. He plants vines close together, forcing their roots to grow deep, and uses a no-fertilizer, no-till growing method that leaves weed roots in place to enrich the environment further.

The chance to bring tech into the mix came along in 2010, when Nakamura lent part of his farm to employees of the electronics giant Fujitsu as part of its employee farming support activities. The company suggested placing networked weather sensors in his fields. This system automatically collected and stored data on temperature, humidity, sunlight, and other environmental information at 10-minute intervals. That gave Nakamura the idea to put this data to use in monitoring what was happening in his fields.

Analysis began after installation of the sensor network in 2011. As a result, Nakamura learned some important facts about his farm.

“Fungicides are needed to stop disease-causing mold from developing, and the traditional thinking is that they must be applied regularly to the fields,” explains Nakamura. “But when we analyzed the data, it showed that there were only about four days a year—or perhaps eight in a really bad year—when mold outbreaks were a real concern.” When warm, humid conditions continue, mold sends out bacterial threads all at once. Fungicides don’t work on mold at the spore stage. “It’s at the germination stage that mold is most vulnerable, and even highly diluted pesticide will work effectively then, so I don’t even need to wear any protective gear when spraying.”

A system is now in place that collects weather data via the wireless network and forecasts when the fields need to be sprayed. The outcome is that fungicide use can be kept to a minimum. 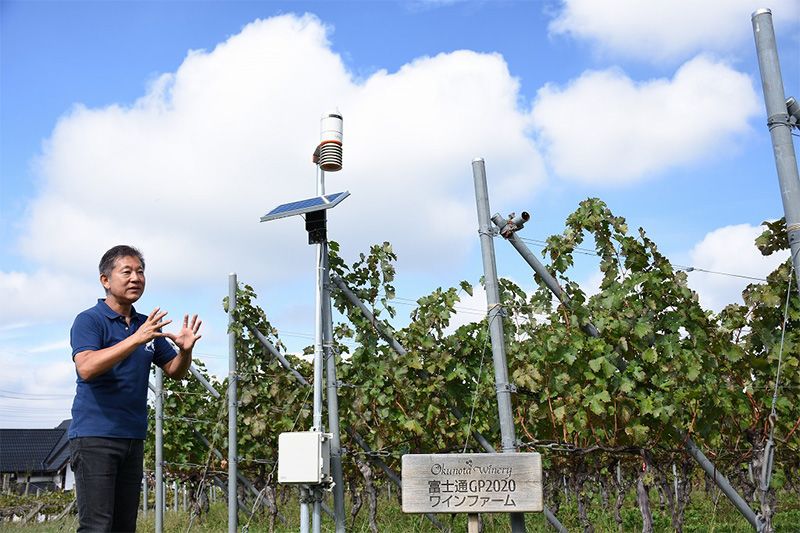 Nakamura Masakazu explains a Fujitsu sensor installed in his fields at the Okunota Winery. The data collected is transmitted via a wireless network.

An environment rich in microorganisms promotes the growth of wild yeast and has a positive effect on the wine fermentation process. Adds Nakamura: “Wine in which wild yeast has been carefully nurtured has a generous flavor profile. Everything we do here is to create an environment for microorganisms to make good-tasting wine.”

Wine and Its Terroir

Since wine is alcohol made exclusively from the juice of grapes, 80% of the taste depends on the quality of the fruit. This makes it vital to grow in fields that provide ideal conditions for the fruit’s development.

For example, Romanée-Conti, one of France’s most prestigious labels, uses grapes grown in Burgundy in premium fields (grand crus) covering only 1.8 hectares. The hilly terrain creates microclimates and differences in soil quality from field to field, which affect the growth and ripening of the grapes, so the fields are ranked in painstaking detail. “Terroir” is used in the wine world to describe the comprehensive natural environment, including everything from climate to soil, that affects the grapes’ growth, causing the wines produced in a particular spot to embody those qualities.

Japan is also making great strides in producing wines with distinct local characteristics. Today a growing number of Japanese producers, starting from scratch with grape-growing and working hard to produce quality wines, have been winning international awards for their creations.

Labeling rules were changed in 2018 so that only wines made from domestically grown grapes can be called “Japanese wine.” There are already wines on the market labeled as containing 100% Yamanashi grapes, too. Japan currently has over 250 wineries, from Hokkaidō to Kyūshū, and as the amount of land given over to growing grapes for wine has expanded, research is picking up steam into the ideal varieties of grape for land at specific elevations, temperatures, and soil qualities.

Growers along the Chikuma River valley in eastern Nagano Prefecture have also begun using IT to manage their fields. Nagano’s Shinshū University is working together with the environmental measuring instrument maker Uizin and the region’s wine producers on a project backed by the Ministry of Internal Affairs and Communications that aims to put the internet of things to use in creating new services. 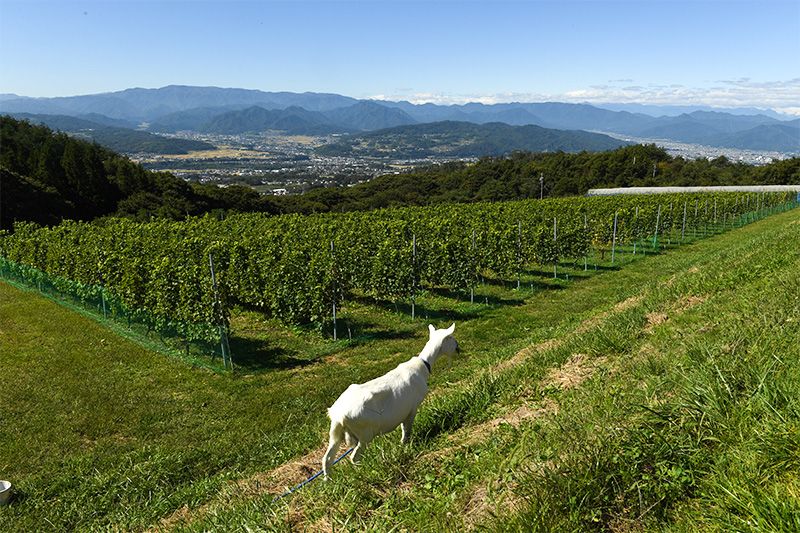 The Chikuma Wine Valley’s Villa d’Est Gardenfarm and Winery is in Tōmi, Nagano. The fluvial terrace home to the vineyard gets plenty of sunshine and is ideal for grape-growing.

Many new wineries and new wine grape growers have established themselves at the eastern end of the Chikuma Wine Valley. Sensors have been set up in 10 locations in Ueda, Tomi, and other parts of the district to measure temperature, humidity, sun exposure, and precipitation six times an hour. Growers input information such as the grapes’ growth stage and pest control records, and university researchers collect ripened grapes to analyze and record their composition. All of the data is analyzed to work out a formula for forecasting the optimum times for pest control and harvesting, helping the growers obtain best results. 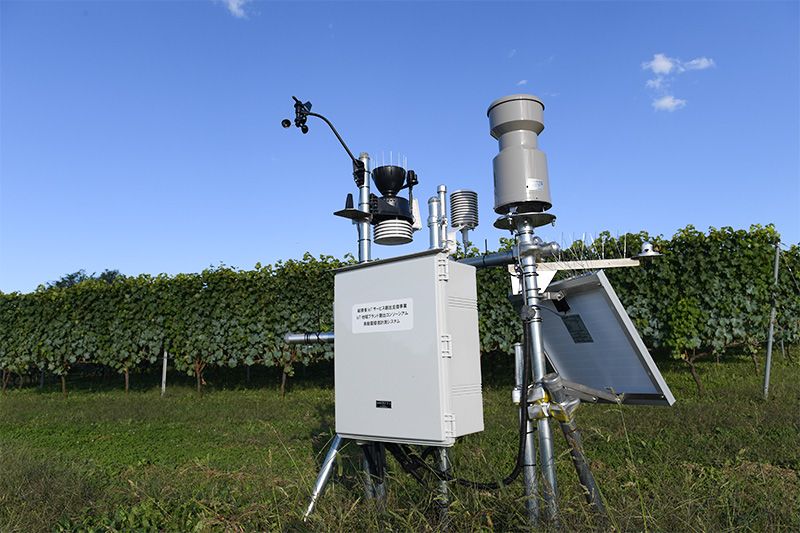 Sensing equipment in a field farmed by Izawa Takahisa, of Tateshina, Nagano, records data in the Chikuma Wine Valley. Izawa, a new grower in the area, moved to the area from Tokyo four years ago.

Kameyama Naoki, a researcher at the Chikuma Wine Valley Data Center, explains the project. “Discussion has begun on the regional appellation for wine produced in Shinshū, the traditional name for Nagano Prefecture, and our project’s mission is to collect data that will be used to establish quality standards. Regional characteristics will be extrapolated from the data collected to support Shinshū wine’s brand power.”

The regional appellation system protects the names of growing regions, for example “Bordeaux” or “Bourgogne,” as brands, but in order to do that for Shinshū, uniform quality standards are necessary. This requires identification of the special characteristics of Nagano wines; the project’s data collection is the first step toward that. 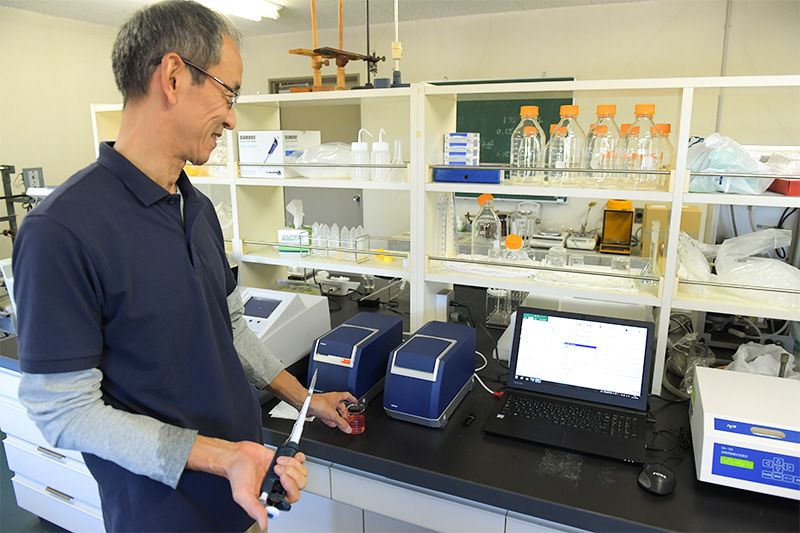 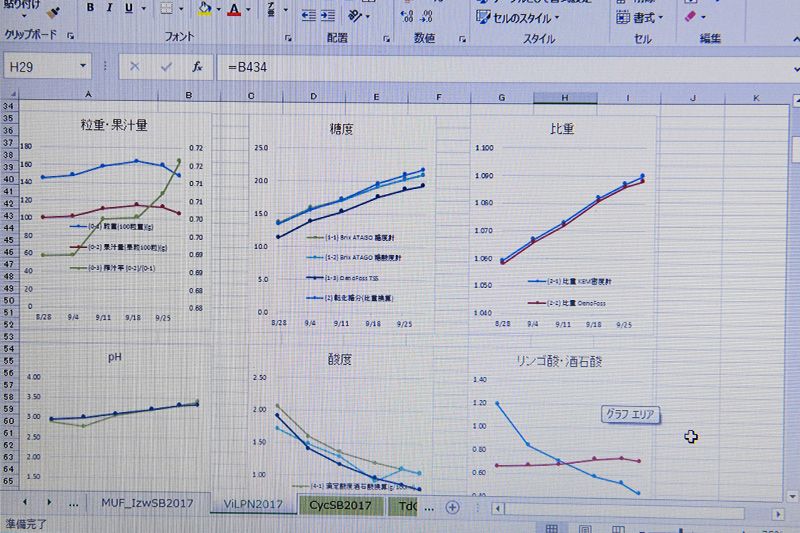 Charts showing changes in the grapes’ composition. This information is analyzed together with data on weather and soil.

The instruments collect weather data automatically, but producers need to input growing records themselves. The system is in test mode right now and is being tweaked to make it easier to use.

Kameyama, who until two years ago was an engineer with an electrical product maker, says, “We’re asking growers to manually input information about their grapes at the various stages of growth—from germination to leafing, flowering, and so on—and about pest control. We are developing an interface like a smartphone’s that can be used with one hand while they are standing in their fields.

“The data collected will eventually be used as a teaching tool for others who want to get into grape-growing. Looking at data collected by others and sharing their experiences means that everyone will get something out of this, which will in turn contribute to the region’s growth and prosperity.” 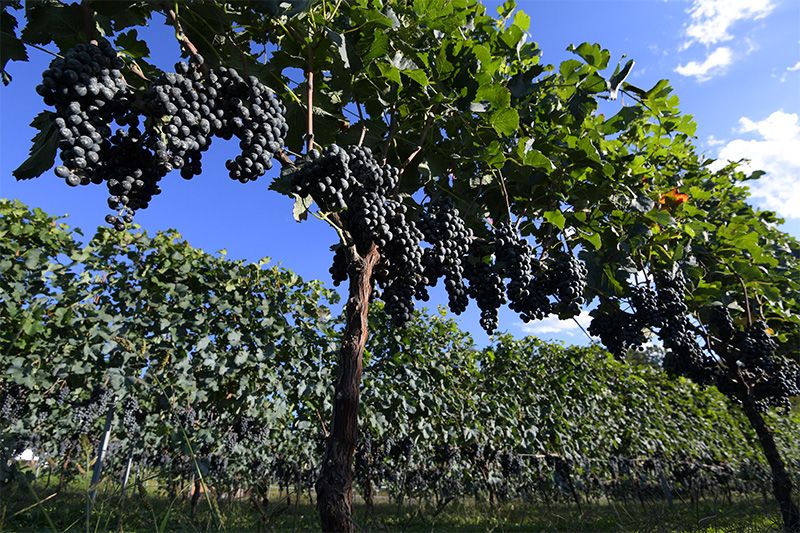 “Scarecrows” for the Digital Age

Smart farming uses drones and satellites, and a framework is rapidly being developed to create big data from weather and soil data inputs and satellite mapping. This new approach is necessitated by the decline in numbers and aging of the farming population, and by global-scale changes in climate and environment.

Softbank Group company PS Solutions developed e-Kakashi, a small farming sensor with AI capabilities, in 2015. Kakashi is the old Japanese name for a scarecrow, but these modern devices stand in fields with a different mission. Today, some 300 e-Kakashi are in use in rice paddies and tomato fields, with users attracted by the sensor’s smart appearance and ease of installation. Not only does e-Kakashi record data on air and ground temperatures, sun exposure, and cumulative temperature, for rice growing it will tell farmers what the data mean: for example, it will send the message that the cumulative total of daily temperatures has reached 1,000ºC, a milestone that means the rice is ready to harvest. 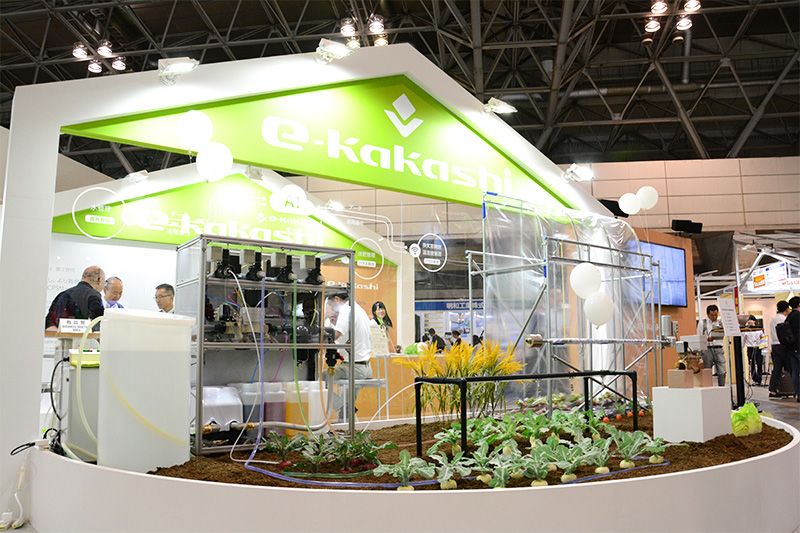 The e-Kakashi system on display at the Agri World trade fair held in Chiba in October 2017. A new model of the device, incorporating AI remote controls for opening ventilating ports in greenhouses and valves for watering fields, made its debut at the 2017 show. 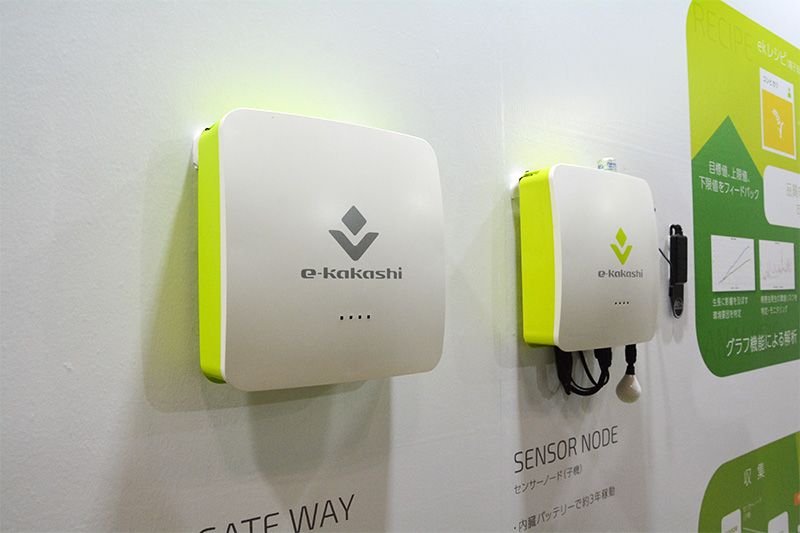 The e-Kakashi “gate way” base unit (left) and a sensor node.

PS Solutions fellow Yamaguchi Norio, developer of the e-Kakashi system, is proud of his creation. “The e-Kakashi’s biggest advantage is that it combines weather and soil data analyzed by experts with the knowledge of experienced farmers, a combination that produces a “recipe” for successful farming.

The e-Kakashi system will go into use in June this year at Sapporo Beer’s Azumino Ikeda Vineyard in Ikeda, Nagano. Togami Takashi, head of PS Solutions’ green innovation R&D department, is a specialist who researched combining IT with plant science at Mie University.

According to Togami, “Some of the fields here produce superior grapes, while in others the crop is just average quality. That’s most likely due to the temperature difference between locations, which also affects the vitality of the plants’ roots, supporting our hypothesis that these factors ultimately affect quality. With e-Kakashi, we can collect data from each plant. With sensors in multiple locations we’re trying to pinpoint why differences arise. Our project is a cutting-edge attempt, supported by highly skilled wine-growing technologists with a keen eye for the condition of the vines in the field.”

The town of Ikeda, in the Japan Alps Wine Valley, is the oldest grape-growing area in Nagano. With plenty of sunshine, large differences in day and nighttime temperatures, and soil with good drainage, it’s ideal for cultivating grapes. Now, with e-Kakashi on the verge of discovering the scientific aspects of the region’s terroir, the experiment has great significance.

In the latter half of the twentieth century, the famed French vintner Henri Jayer, reputed to have had a godlike touch with wines, decried the standardization of wine that scientific advances and mass consumption might bring. But the technological revolution now taking place in Japanese vineyards aims to produce wines whose natural qualities are highlighted.

The words of Kitazawa Mika, who analyzes the grapes delivered to the Chikuma Valley Wine Data Center, make a strong impression: “If data from all the growers is collected and shared, they will have the opportunity to learn from their neighbors. Even if there’s something they don’t know, the next generation may discover it. Right now we’re at the starting line for enriching everyone’s knowledge.”

With this big data approach, using huge volumes of production information accumulated across generations, Japan’s producers may one day achieve superb wines that we can only dream of today.