Portrait of Palau: An Ally of Japan in the Pacific

Politics Mar 23, 2018
The waters around Palau are connected to Japan’s national security. With this in mind, the Nippon Foundation recently donated a new 40-meter patrol boat to help the small Pacific nation enhance maritime security in the area surrounding Micronesia.

Poachers Target the Bounty of the Sea

The island nation of Palau is known for its beautiful, calm, and crystal-clear waters. Divers hail it as one of the world’s top destinations, and words do not do justice to the true beauty of its ocean. 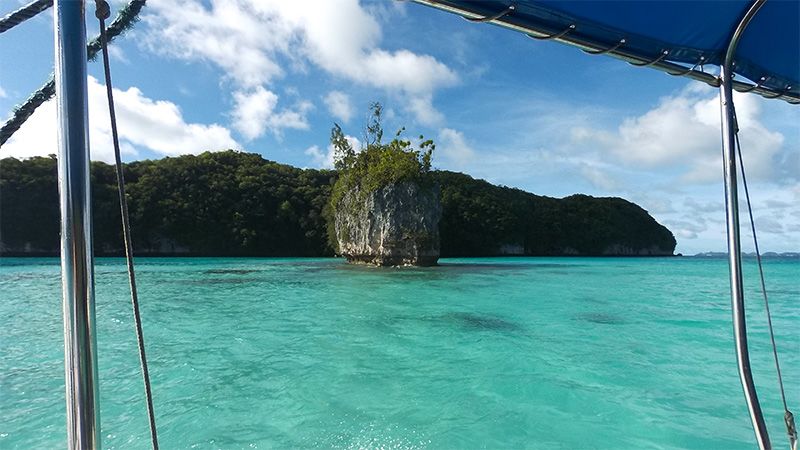 The brilliant colors of Palau’s waters set off against islands and sky. (© Nojima Tsuyoshi)

But these beautiful waters are also facing considerable threats—not least illegal fishing operations carried out by foreign fishing outfits. In addition to this poaching, sales of weapons and drugs on the high seas, as well as Chinese military operations in the region, are starting to cast a dark shadow across the waters that are Palau’s pride.

A nation of only 21,500 with no military of its own, Palau is sorely lacking when it comes to policing the 629,000 square kilometer exclusive economic zone that surrounds its islands. Although its precious oceanic resources are being taken advantage of by poachers, the country continues to grapple with an inability to counter the acts of these criminals.

To address this issue, the Nippon Foundation has provided Palau with a 40-meter patrol boat, the PSS Kedam, one almost identical to those used by the Japan Coast Guard. With a gross tonnage of 257 tons, the vessel is capable of speeds up to 25 knots. 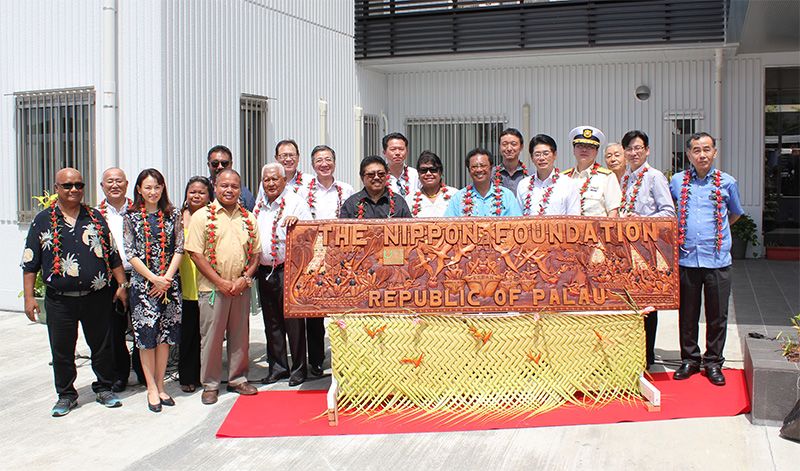 A ceremony to mark the Nippon Foundation’s presentation of the patrol boat on February 13, 2018. Palauan government officials including President Tommy Remengesau (wearing light blue, at the center of the sign) met with Japanese representatives in Koror to receive the boat. (Provided by the Nippon Maritime Center)

Training a Part of the Gift

The three countries of Micronesia—Palau, the Federated States of Micronesia, and the Marshall Islands, all of which have tiny populations and large EEZs to patrol—have been working with the Nippon Foundation, the Japan Coast Guard, and the Sasakawa Peace Foundation to improve their maritime policing capabilities. Cumulative project costs stand at ¥4.7 billion, with shipbuilding costs—¥1.6 billion for the vessel presented to Palau alone—being the single largest item in the scope of the project.

Maritime security has historically been a challenge for all three nations, and the Kedam is the most recent development in a project tasked with combatting this issue. However, as the Nippon Foundation sees it, simply handing over the boat to Palau will do little to help unless proper support is also forthcoming. The foundation has also agreed to construct an office for Palau’s Division of Marine Law Enforcement, to build a berth for the vessel, and to provide the nation with enough fuel to cover 1,400 hours of patrols each year.

The Kedam is currently docked at the southernmost point of Koror Island, awaiting its first cruise. Patrol staff—10 crew members and 5 officers—are currently undergoing a two-month training course at the Marine Technical College in Japan, paid for by Japanese funds. From April of this year, one Japan Coast Guard officer is to be stationed in Palau to help assist with the vessel’s operations. 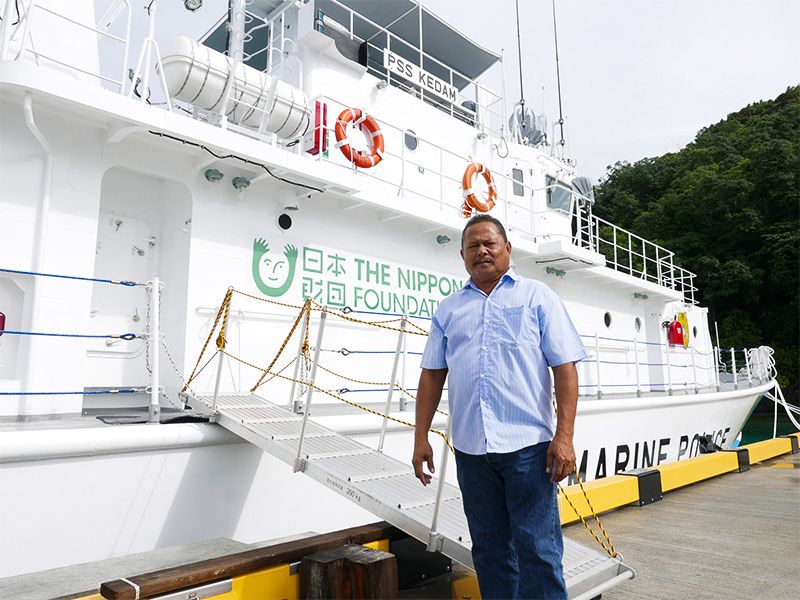 Thomas Tutii, director of Palau’s Bureau of Maritime Security and Fish & Wildlife Protection, in front of the Kedam. (© Nojima Tsuyoshi)

Thomas Tutii, who heads the Bureau of Maritime Security and Fish & Wildlife Protection, notes, “We want to get to work as soon as preparations for the new patrol boat are complete. Thanks to the fuel support we’re receiving, we should be able to make Palau’s presence known in the EEZ.”

Up until now, Palau’s Maritime Security Bureau had only one midsize patrol boat—a gift from Australia—and three smaller vessels, a past gift from the Nippon Foundation. 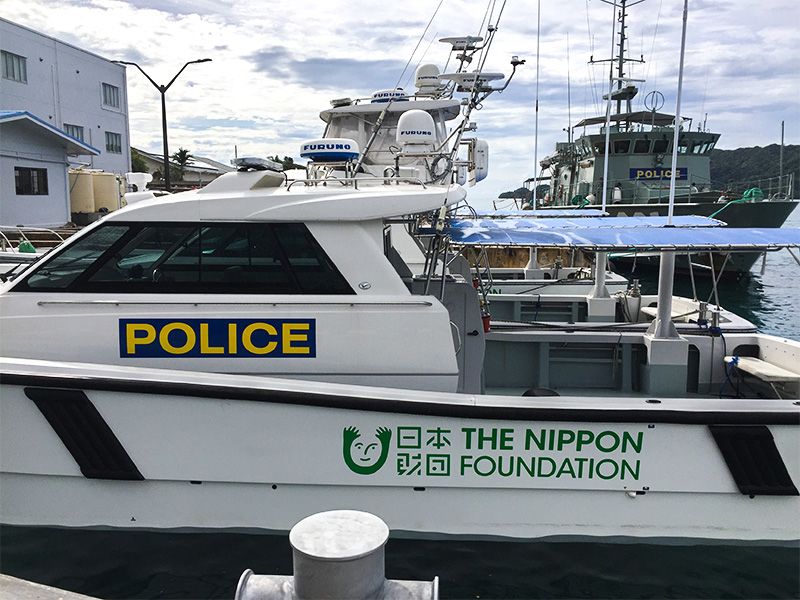 A small patrol boat given to Palau by the Nippon Foundation.

Tutii says that Palau has had a midsize patrol boat for 20 years, but it is often plagued with breakdowns, frequently keeping it from being able to go out on patrols.

In addition to that, the Palauan authorities have had major problems with their equipment. While they monitor the movements of fishing vessels in nearby waters on a 24-hour basis, they lack the equipment to transmit that data to the vessels currently in use. “Since we’ll be able to constantly share the same data that we have back at headquarters with the new boat, when we pick up on illegal activity we can quickly check it out. This should make our job much easier,” remarks Tutii.

What kinds of illegal activities do the Palauans face? “Our biggest problem is with fishermen from the Philippines,” says Tutii, alleging that these fishermen use fish-aggregating devices, man-made devices that attract fish that utterly decimate populations of wildlife, with poachers targeting expensive breeds such as tuna in particular.

There have also been reports of local fishermen cutting deals with foreign fishing outfits where the locals pass off fish they have caught to Taiwanese fishermen in illicit “offshore dealings.” Unregulated foreign ships coming into Palauan waters are also likely to be carrying drugs as well.

In the past, it was boats from Indonesia that posed the biggest problem to Palau in terms of illegal activities in the region. However, by taking measures such as burning vessels captured in the course of illegal activities, the Bureau of Maritime Security has managed to greatly improve the situation. However, as the swifter ships from the Philippines are more suited to outrunning police vessels than their Indonesia counterparts, even if the Palauans get word of illegal activity, by the time they arrive the boats are long gone.

Threats to maritime security do not stop at just resources and the environment, of course. In recent years in particular, Chinese naval exercises have increased in number in the South China Sea, located adjacent to Palau, the nation taking islands in the region under working control and setting up ports and airstrips wherever it can.

Fully 80% of the oil imported by Japan travels through the South China Sea on its way from the Middle East, via the Indian Ocean and the Strait of Malacca. If this route becomes no longer viable for some reason, Japan has two substitute routes in mind: one through Indonesia’s Lombok Strait, lying between Lombok and Bali, to the Makassar Strait and Celebes Sea and then to the East China Sea; and the other around the southern side of Australia and then past the eastern side of Guam, making for a much longer journey.

The southern Australia route would make the journey excessively long, thereby increasing importation costs. According to the Nippon Foundation’s calculations, Japan, which currently needs 4.12 million barrels of imported oil per day, would see its feasible imports drop to just 2.47 million barrels a day, causing industry to stagnate and pressing the country to think of alternate means for addressing its energy needs. The impact on the economy would be enormous.

With the route travelling through the Lombok Strait, however, there wouldn’t be a significant change in the distance travelled. While this would lead to price increases, the foundation believes that the country could continue to maintain its petroleum imports at current levels. Notably, this route would have tankers travelling near Palauan waters, and Japan is hoping to head off Chinese influence in their region with an eye on the potential for this sea route becoming necessary in the future.

A Joint Commitment to Maritime Safety

Palau is located in the southern part of what China calls the “Second Island Chain.” China’s current maritime military strategy is to exert influence in the region between the first and second island chains, the former accounting for the area stretching from the Ryūkyū Islands including Okinawa to Taiwan and the South China Sea, and the latter extending from the Ogasawara Islands to the Mariana Islands and southward to the waters around Guam and Palau in the Western Pacific. 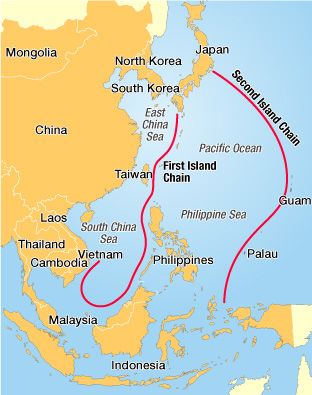 In recent years China has taken an increasingly aggressive stance on the Senkaku Islands, and its activities in the area around Okinawa, shows of force toward Taiwan, and advances into the South China Sea have also thrown the larger picture of its maritime military strategy into sharper focus.

With all of this in mind, global maritime security analysts are paying more and more attention to the important position that Palau occupies in the geopolitical scheme. Japan, for its part, needs to further its relationship with the small island nation that will play a vital role in an enhanced maritime security situation.

The Western Pacific Ocean was a key battlefield during the Pacific Theater of World War II. The Palauan island of Peleliu was the scene of a particularly fierce standoff where 10,000 Japanese and American soldiers lost their lives.

After the end of World War II, the United States entered into the Compact of Free Association with the three countries that comprise Micronesia. Through the COFA, America maintains military jurisdiction over a large area of the Western Pacific. Australia, meanwhile, exerts considerable influence in the Southern Pacific. Seeing as how Japan once fought with these two countries in the same area, there has traditionally been a general sentiment that Japan should be distrusted if it were to exert itself as a security force for the island nations in the region.

However, in the face of Chinese military expansionism and North Korea’s unpredictable posturing in recent years, Japan-US-Australian relations have grown deeper. Today we see a regional situation where the United States and Australia look to Japan as a partner that will help to maintain security in the Pacific Ocean.

In the wake of North Korea’s threats last August to target waters near Guam with its ballistic missile tests, the United States and Palau agreed to install high-performance US radar facilities in Palauan territory. In a joint declaration, the two countries announced that the radar sites would enhance the Palauan government’s law enforcement capabilities within its EEZ while helping the US government to defend against airborne threats in the region.

Palauan GDP is currently above $12,000, moving the nation nearly out of the range of developing countries that receive financial aid. While Palauans may no longer be eligible to receive large amounts of official development assistance from, Japan and other national donors, the Nippon Foundation has signaled its intent to continue offering support to the nation in a nongovernmental capacity, helping the people of Palau to keep their waters secure.

(Originally published in Japanese on February 16, 2018. Banner photo: The Kedam, presented to the Palau Division of Marina Law Enforcement by the Nippon Foundation. © Nojima Tsuyoshi.)