Society Culture Jun 29, 2018
The Japanese men’s soccer team has qualified for the last six World Cups. While Japan is now recognized as one of Asia’s leading football nations, it had no professional teams until as recently as 1990, and for many years qualification for the sport’s biggest tournament remained frustratingly out of reach.

Japanese soccer first came to global attention in 1968 at the Olympic Games in Mexico. Forward Kamamoto Kunishige finished the tournament as top scorer, and he and his teammates—including Watanabe Masashi and Sugiyama Ryūichi—shone as the national team played its way to the semifinals, eventually claiming a bronze medal.

Throughout the 1960s, and especially during the years following that success, the main goal for Japan’s national side was always to make it to the Olympics. From the run-up to the 1970 finals onwards, though, Japan also became a regular participant in the World Cup qualifying stages. But Japan struggled in an Asian qualifying zone that in those days included nations like Australia, Israel, and South Korea, missing the final cut tournament after tournament. In the final East Asian qualifying round for the 1986 World Cup in Mexico, Japan lost to South Korea in a two-legged playoff. Efforts to reach the 1990 Italy finals proved similarly frustrating, as Japan bowed out at the group stage following home and away losses to North Korea.

First Foreign Coach and the Agony of Doha 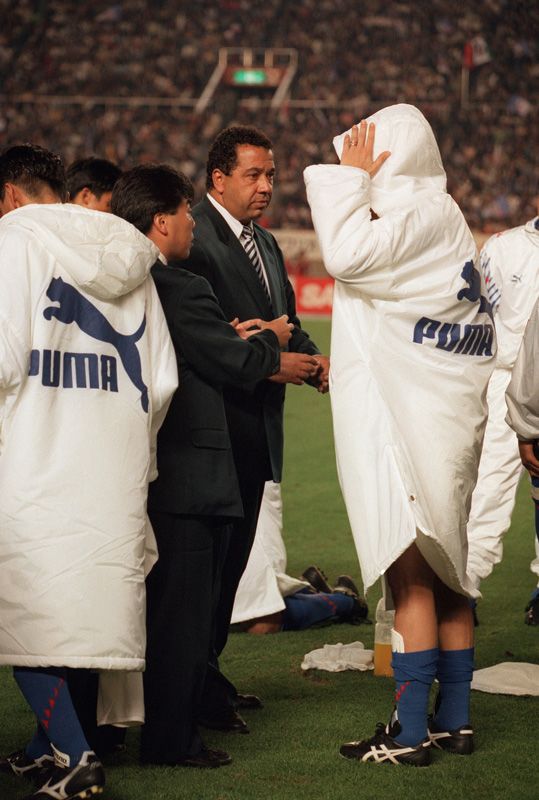 Hans Ooft was the first foreign coach to take charge of the national team. (© Jiji Press)

In 1991 the Japan Football Association set up the Japan Professional Football League. This was followed two years later by the launch of the 10-team J. League. In 1992, Dutchman Hans Ooft was appointed as the first foreign coach of the Japanese national team. With a squad built around players like Miura Kazuyoshi, Ramos Ruy, Ihara Masami, and Hashiratani Tetsuji, Ooft made a concerted push to qualify for the World Cup finals.

The team’s results steadily improved, and in 1993 Japan made it through to the final Asian qualifying round for the 1994 World Cup in the United States. But in Doha, Qatar, ahead late in the game against Iraq in the fifth and final qualifying match, Japan conceded a goal deep into second-half stoppage time. The game ended in a draw, causing Japan—which had been on top of the group at the start of play—to slip behind South Korea on goal difference and into third place, narrowly missing out on qualification. The match is remembered by Japanese soccer fans to this day as the “Agony of Doha.” 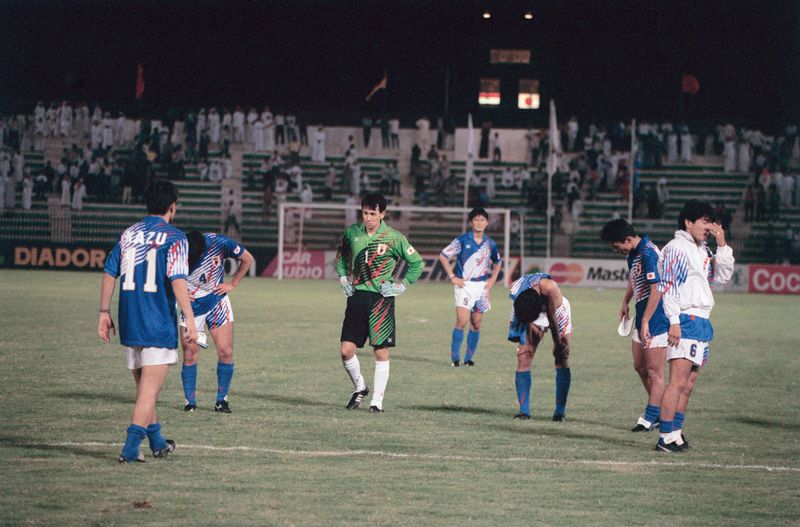 Heads drop in Doha as the October 1993 game against Iraq ends in a draw and the team narrowly misses out on World Cup qualification. (© Jiji Press)

But the pain could not go on forever. Four years later, on the road to the 1998 tournament in France, Japan finished second behind South Korea in the final qualifying group, sending the squad through to a playoff against Iran in Johor Bahru, Malaysia. A 2–2 deadlock after 90 minutes sent that game into extra time. Late on, with the two teams seemingly heading for a penalty shootout, forward Okano Masayuki scored the golden goal that sent Japan to its first ever World Cup finals. The long wait was over at last.

The coach in charge of Japan for the 1998 France World Cup was Okada Takeshi. He made the likes of Nakayama Masashi, Ihara Masami, Nakata Hidetoshi, Nanami Hiroshi, Akita Yutaka, and Kawaguchi Yoshikatsu the mainstays of his team. In the group stage, 1–0 defeats to both Argentina and Croatia left Japan unable to qualify for the knockout round. Though the team also lost its third and final game 2–1 to Jamaica, Nakayama Masashi did manage to record Japan’s first-ever goal at a World Cup finals.

For the 2002 World Cup, held jointly in Japan and Korea, French manager Philippe Troussier opted for a balance of experience and youth as he called up established internationals Nakata Hidetoshi, Miyamoto Tsuneyasu, Matsuda Naoki, and Morishima Hiroaki along with Ono Shinji, Inamoto Jun’ichi, and Nakata Kōji, the spine of the team that finished as runners-up at the 1999 FIFA World Youth Championship in Nigeria. The team drew 2–2 with Belgium in its opening match before going on to defeat Russia (1–0) and Tunisia (2–0), finishing at the top of its group and qualifying for the knockout round. Unfortunately for Samurai Blue fans, Japan exited the tournament at the last 16 stage with a 1–0 loss to eventual semifinalists Turkey.

Troussier’s successor as coach was former Brazilian superstar Zico, who in 2006 took Japan to Germany for its third World Cup in a row. Zico added new faces like Nakamura Shunsuke, Nakazawa Yūji, Takahara Naohiro, and Alex Santos to stalwarts like Nakata Hidetoshi and Kawaguchi Yoshikatsu. Sadly, the team let a 1–0 lead slip in the opening match and lost 3–1 to Australia, before going on to draw 0–0 with Croatia. A 4–1 mauling at the hands of reigning champions Brazil left Japan at the bottom of the group and out of the tournament. This disappointment was compounded soon afterward when, to the surprise of many, national team talisman Nakata announced his retirement from the sport at the age of just 29.

Former Yugoslavia coach Ivica Osim took the helm after the 2006 World Cup, but was forced by ill health to step down in November the following year. Okada returned to the fold as Osim’s replacement, remaining in charge for the 2010 World Cup in South Africa. The two-time national team coach placed his trust in a new generation of players, including Hasebe Makoto, Endō Yasuhito, Honda Keisuke, Nagatomo Yūto, Ōkubo Yoshito, and Tanaka Tulio. His faith paid off in the group stage as Japan triumphed 1–0 over Cameroon. After a narrow 1–0 loss to a strongly favored Netherlands side, Okada’s men looked impressive as they dominated Denmark, with a stunning long-range free kick from midfielder Honda setting them on their way to a 3–1 victory and into the last 16. In the first knockout round, Japan managed a 0–0 draw after extra time against a physical Paraguay team before going out 5–3 on penalties. 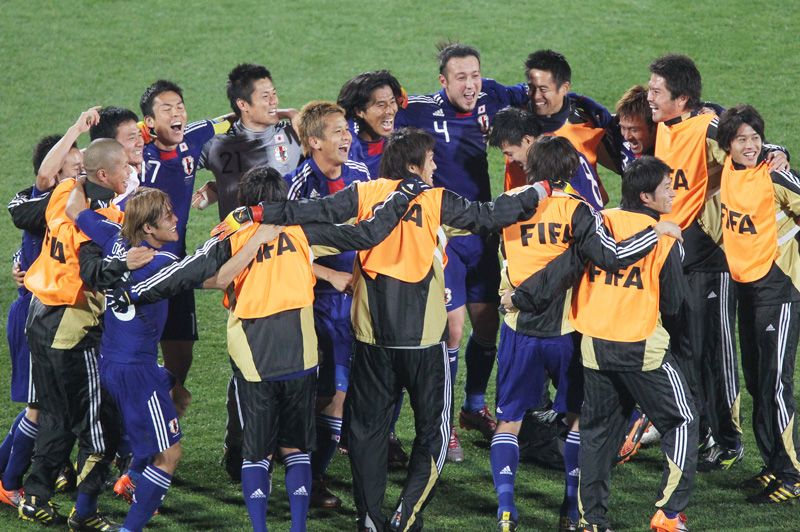 June 2010: The players celebrate after sealing progress to the knockout stage of the South Africa World Cup with a convincing win over Denmark in Rustenburg. (© Jiji Press)

Italian Alberto Zaccheroni took the helm from Okada in late 2010. Introducing an attacking style of play, he successfully piloted Japan to victory at the Asia Cup Championship in 2011 and then on to the 2014 World Cup in Brazil. The team, however, put in a disappointing showing in its fifth appearance at soccer’s premier event, losing its first match against the Ivory Coast 2–1, drawing with Greece 0–0, and then bowing out with a 4–1 drubbing by Colombia. Zaccheroni stepped down immediately after the tournament.

Samurai Blue was one of the first teams to qualify for the 2018 World Cup in Russia. However, after the squad underperformed in friendlies, just two months ahead of the tournament the JFA unexpectedly fired coach Vahid Halilhodzic, who had led the team since March 2015, and replaced the Bosnian skipper with Nishino Akira.

Japan fared remarkably well in Russia despite the last-minute shakeup. The World Cup squad started the tournament with a surprise 2–1 win against Colombia before drawing 2–2 with Senegal and then losing 0–1 to Poland to finish second in Group H with four points. In the first round of the knockout stage Japan went up two goals early against Belgium, but after allowing the Red Devils to draw even eventually lost 3–2 after conceding a goal in the last seconds of stoppage time.

The Story Behind Japan’s Uniform

Japan sports a dark indigo kit for home games, earning the squad its Samurai Blue nickname. The team first donned light blue for the 1936 Berlin Olympics, and aside from brief stints in the red and white of the national flag, it has stuck with its trademark color. Every home uniform since 1992 has been blue and the JFA designated it the official color in 2009.

In Russia, Japan chose a traditional deep indigo hue called kachi-iro for its uniform. In the past samurai are said to have favored the shade as kachi shares the same pronunciation in Japanese as the word for “victory,” giving the name an auspicious ring. In keeping with the traditional motif, the dotted white lines on the kit are fashioned after the white stitching commonly used to decorate indigo-dyed cloth.

From left: Japanese star midfielder Honda Keisuke celebrates scoring in South Africa in 2010, Brazil in 2014, and Russia in 2018. (© Jiji)