Economy Society Culture Lifestyle Feb 24, 2015
Over 13 million foreign tourists visited Japan in 2014, setting a new record. During their stay, these visitors spent a total of more than ¥2 trillion. The recent rise in the number of foreigners visiting Japan has been bolstered by the weak yen and the expansion of tax-free items available to them.

Asia Accounts for Most Visitors

The number of foreign visitors to Japan in 2014 increased by 29.4% over the previous year to 13,413,600, according to estimates by the Japan Tourism Agency of the Ministry of Land, Infrastructure, Transport, and Tourism. This marks the second straight year for Japan to register a record high. Visitors from Asia accounted for 79% of overall foreign tourists in 2014 at 10.61 million—and 84% of those Asian tourists, or 8.92 million, were from East Asia. The largest number of tourists came from Taiwan (2.83 million), followed by South Koreans (2.76 million), Chinese (2.41 million), Hong Kong residents (930,000), and Americans (890,000). These top five were followed, in turn, by Thailand, Australia, Malaysia, Singapore, and Britain, to round out the top ten. 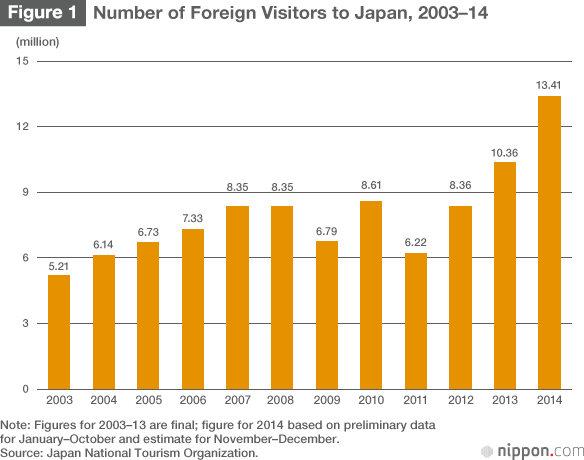 Foreign Visitors to Japan in 2014

Foreign Visitors to Japan in 2014

Foreign visitors to Japan in 2014 spent a total of around ¥2.03 trillion, a 43% increase over the previous year. Shopping purchases accounted for ¥700 billion, or roughly 35% of the total, followed by hotel accommodations and meals at around 20% for each. Expenditures among foreign visitors to Japan averaged ¥150,000 per person. Chinese visitors led the way in spending in 2014, with a total of ¥558.3 billion spent, or 27.5% of overall tourist spending. They were followed by Taiwanese, who spent ¥354.4 billion, or 17.5% of the total, and South Koreans, who accounted for 10.3% of overall spending, or ¥209 billion. As these figures show, tourists from neighboring Asian countries made up the bulk of the big spenders.

Exemption from the consumption tax has been expanded to include not only home electronic goods and apparel but also commodities for daily use, food and drinks, and other items. In addition, thanks to the weaker yen, more foreign visitors are buying Japanese luxury goods, which are often far cheaper to purchase in Japan than in their home countries.

The prospect that the deteriorating relations between Japan and China may be on the mend has also contributed to the recent increase in the number of Chinese tourists, who tend to be big spenders in Japan. During this year’s spring festival in China, which ran from February 18 to 24, many Chinese tourists visited Japan. Sightseeing spots seemed to be gearing up for the arrival of these Chinese holiday shoppers through measures that included setting up areas for tax-free shopping.

But Japan still has a long way to go before it can be considered one of the world’s top tourist destinations. In 2013 Japan only ranked twenty-seventh globally as a tourist destination, although that was at least an increase over its thirty-third place ranking of the previous year. 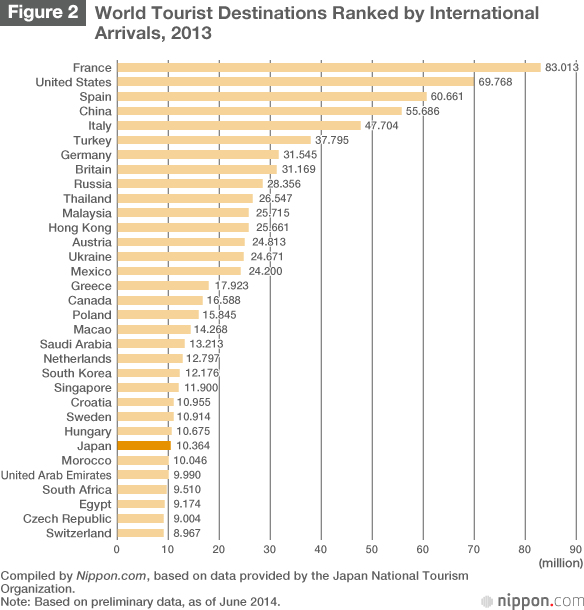 In the run-up to the 2020 Tokyo Olympics and Paralympics, the government has set the goal of raising the number of foreign visitors to Japan to 20 million by that year. In pursuit of this goal, the government plans to broaden the scope of its “Visit Japan Campaign”(*1) to attract foreign visitors to Japan. Currently the campaign targets 14 countries and regions considered to be key markets, but that number will be expanded to 20 countries and regions. The government expects that during 2015 there will already be 15 million visitors to Japan. Given the current pace of increasing numbers, the 2020 target seems well within reach.