Centenarians in Japan: 50,000-Plus and Growing

Jun 1, 2015
Sales of adult diapers in Japan outsold those for infants in 2014, speaking volumes about the country’s plummeting birthrate and the rapid aging of society. A shrinking population and rising social security costs are also weighing heavily on the nation’s finances. These demographic challenges are beginning to encroach on emerging economies as well. What lessons will they learn from Japan’s experience?

A number of Western media reports focused on Japan’s super-aged society when Osaka resident Ōkawa Misao, the world’s oldest woman, passed away at the age of 117 on April 1. After Ōkawa’s death, only four people born in the nineteenth century were still alive around the world.

According to the Ministry of Health, Labor, and Welfare, the number of people aged 100 or over in Japan was 58,820 as of September 2014, an increase of 4,482 over the previous year. That is nearly enough centenarians to fill Tokyo Dome. Of the total, 87.1% are women.

According to UN estimates, the population of people aged 100 or over around the world was 316,600 in 2012. The global trend toward longer lives is being prompted by advances in medical technology and better health conditions. The median age in Japan is currently 45, but this is expected to rise above 50 by 2025; all signs point to an increasingly grayer society.

The share of centenarians in Japan is 42.76 per 100,000 population; this is significantly higher than the second oldest country in the world, France, where the share is 36.5. Japan also leads the world in actual numbers with its 58,820 centenarians, topping the 53,364 (as of 2010) in the United States.

Number of People Aged 100 or Over

The Industrial Revolution in the late eighteenth century triggered a spike in the global population, which reached 2.6 billion in 1950 and 7.0 billion in 2011; the United Nations Population Fund estimates that it will rise to 9.3 billion in 2050. The world is expected to become grayer as well, with the share of people aged 65 or over expanding from 7.6% in 2010 to 18.3% in 2060.

Japan was the first to become a super-aged society, but other industrialized and emerging countries are also aging quickly. The trend is particularly pronounced in Asia; South Korea, for example, is expected to see its share of the elderly swell from 9.3% in 2005 to 33.6% in 2060—a pace even faster than Japan’s. The speed is also quite high in Thailand, Vietnam, and China. These countries will need to act swiftly to meet the pension, nursing-care, and healthcare needs of an aging society before their economies have had time to fully develop—a challenge that the industrial countries have not experienced. 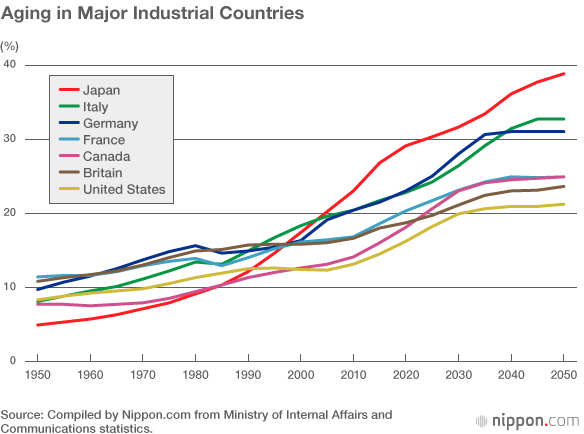 In 2007 the Japan International Cooperation Agency began providing Thailand, expected to see its share of the elderly exceed 14% by 2024, with technical cooperation to help meet its aging needs. It implemented a four-year program called CTOP (Community-based Integrated Health Care and Social Welfare Services Model for Thai Older Persons) that made maximum use of the country’s existing community resources.

The CTOP project integrated what had been vertically divided services for the elderly in the health and welfare sectors by tapping into the pool of community health volunteers, said to number approximately 1 million in the country, constructing a model for the efficient provision of various services. Since 2013 JICA has been implementing a follow-up, five-year project called LTOP (Project of Long-term Care Service Development for the Frail Elderly and Other Vulnerable People) that focuses on the provision of systematized elderly care.

According to the Ministry of Internal Affairs and Communications, the number of children in Japan under the age of 15 was 16.17 million (as of April 1, 2015), a decline of 160,000 from the previous year and the lowest since statistics began being compiled in 1950. The figure has been falling for 34 straight years, demonstrating that the plummeting fertility rate in Japan has not come to a halt. The share of the under-15 population, at 12.7%, declined for the forty-first consecutive year.

Source: Compiled from Ministry of Internal Affairs and Communications statistics.

With a declining birthrate and growing ranks of the very old, Japan is seeing its population shrink. According to the 2014 white paper on the aging society, Japan’s population is projected to dip below 100 million in 2050 and fall below 90 million in 2060. The working-age population is also dwindling; for every 100 persons between the ages of 15 and 64, there are currently 42 people who are 65 or older. By 2023 the figure is expected to rise to 50. This means that in less than a decade, there will be only two working-age people supporting the social security needs of each elderly person.

Japan’s total population began to decline in 2005, and the adverse consequences are likely to be felt first by the outlying, fiscally weak areas of the country. Many infrastructure projects, based on inflated projections for road, airport, housing, and energy demand, will need to be reexamined. Rural municipalities may even begin fighting with one another over the dwindling pool of residents. Families are less likely to be able to care for aged relatives. The demographic changes are likely to sap Japan of its vitality and are among the biggest and most urgent challenges the country confronts in the twenty-first century.

(Originally written in Japanese by Murakami Naohisa of Nippon.com and published on May 15, 2015. Banner photo: Ōkawa Misao of Osaka, the world’s oldest person, celebrates her 117th birthday on March 5, 2015. © Jiji.)