Theme Parks in Japan: Not Such a Small World After All

Economy Oct 1, 2015
Among Japan’s theme parks, Disneyland and DisneySea just outside of Tokyo and Universal Studios Japan in Osaka are the most famous and popular by far, but many other parks are also drawing visitors, and some promising challengers are about to enter the field. Nippon.com takes a look at the latest developments.

Japan has the standard array of major recreational establishments, such as zoos, aquariums, museums, and amusement parks. And it also has many theme parks. These are places that offer experiences not available at regular amusement parks, such as walking the replicated streets of distant lands or frolicking on recreated sets from famous movies. Theme parks hit the big time here in 1983 with the opening of Tokyo Disneyland (actually located in Chiba Prefecture, just east of Tokyo), a smash success that inspired a whole series of other more or less magic kingdoms.

The first was Space World, which opened in 1990 in Kitakyūshū, Fukuoka Prefecture. Next came Huis Ten Bosch (Dutch for “house in the woods”), which opened in 1992. There visitors can experience a bit of old Holland recreated on a spacious tract located in Sasebo, Nagasaki Prefecture. Huis Ten Bosch is a successor of sorts to Nagasaki Holland Village, which the same firm operated at a nearby location from 1983 to 2001. In 1994 Shima Spain Village opened in Mie Prefecture, and three years later Kurashiki Tivoli Park, inspired by Tivoli Gardens in Copenhagen, opened in Okayama Prefecture. The last major entry in this series, another import from the United States, began operating in Osaka in 2001: Universal Studios Japan.

In the years since its opening, Universal Studios Japan has worked to improve its initially lackluster appeal to the children’s segment of the leisure market. By adding new attractions, it has evolved into a recreational institution that holds “universal” appeal, attracting the young and the old, males and females alike. Its Harry Potter attractions, which debuted in 2014, have been a big hit; in the year since they opened, admission soared by 28%, to 13.5 million. Work is scheduled to begin soon on a new high-rise hotel nearby. The operator of Universal Studios Japan, emboldened by its success in Osaka, is reportedly planning to build another theme park in Okinawa Prefecture, possibly on the grounds of the state-run Okinawa Expo Park in Motobu. 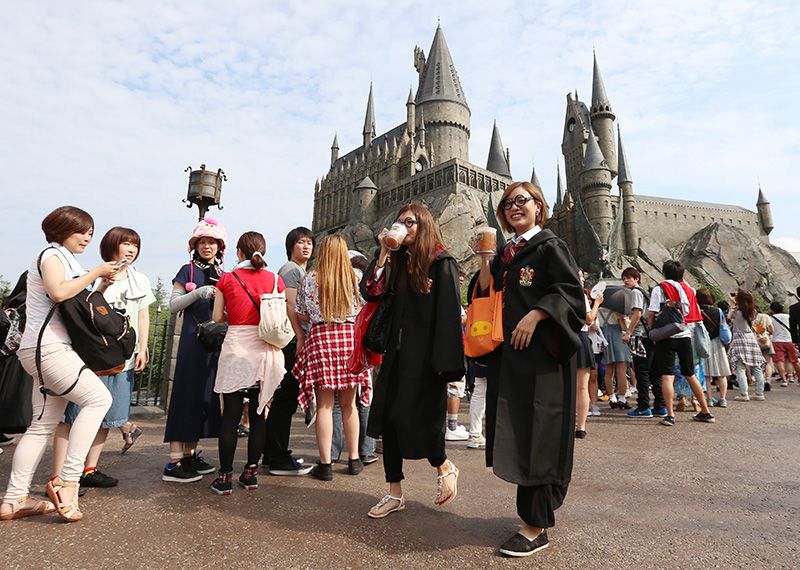 Keep Them Coming Back

Tokyo Disneyland, now in its fourth decade, drew 10 million visitors in its first year and has been Japan’s most popular recreational attraction ever since. Its dominant status was bolstered in 2001 with the opening of the nearby theme park Tokyo DisneySea. In fiscal 2014 these two Tokyo Disney Resort parks attracted some 31.4 million visitors. Using tie-ins with popular movies and other characteristically Disney strategies, the parks continue to draw crowds with slick performances and new attractions that enhance their image as places of enchantment. The Disney approach, with its emphasis on high-quality service, keeps people coming back: 90% of patrons are repeat visitors.

Japan’s most popular theme parks have posted some of the highest attendance figures anywhere. According to rankings compiled by the Themed Entertainment Association, three of the five best-drawing parks in the world are in Japan.

Theme parks around the world, by attendance (2014)

In China, meanwhile, a new addition to the Disney empire is scheduled to open in Shanghai in the first half of 2016. This facility, which will eventually encompass three separate theme parks, is envisioned as the biggest Disney location in Asia.

In Japan’s theme-park scene, dominated by the Disney and Universal Studios establishments, the competition is intense. The enormous investment required can be crippling, and not a few theme parks are facing financial difficulties. Then again, some are thriving. Huis Ten Bosch has made a convincing recovery with support from the Japanese travel agency H.I.S., and Shima Spain Village has done well by pushing its unique appeal to a focused market segment. By offering and relentlessly promoting new attractions and distinctive special events, the successful parks are drawing both new and repeat visitors in increasing numbers.

New types of theme parks are also on the way. In March 2016 the Snoopy Museum Tokyo is scheduled to open in the capital’s Roppongi district. Devised as a temporary exhibition with a 30-month run, the museum will function as the first external branch of the popular Charles Schultz Museum and Research Center in Santa Rosa, California. And in 2017 a theme park inspired by the Finnish fantasy characters known as Moomin, who are popular in Japan, is set to open on the shores of Lake Miyazawa in Hanno, Saitama Prefecture. It will be the first Moomin theme park outside Finland. In addition, construction is underway in Nagoya on a Japanese version of Legoland, which will be the second Lego theme park in Asia. Its operators predict that the new park, expected to open in the spring of 2017, will attract 2 million visitors a year.

Sales and Attendance Higher Than Ever

It is well known that Japan has a soft spot for theme parks, but even so Tokyo Disney Resort’s attendance figure of over 30 million a year is remarkable. When Tokyo Disneyland attracted 10 million in its first year, the experts credited it with a cumulative economic impact of ¥1.5 trillion, which significantly raised the profile of the nation’s leisure and recreation industry.

According to a survey by the Ministry of Economy, Trade, and Industry, Japan’s theme parks posted ¥628.9 billion in sales in fiscal 2014, topping ¥600 billion for the first time. The 2014 sales figure, which surpassed the previous year’s total by 6.8%, was the highest ever recorded since the annual survey was launched in 2000. 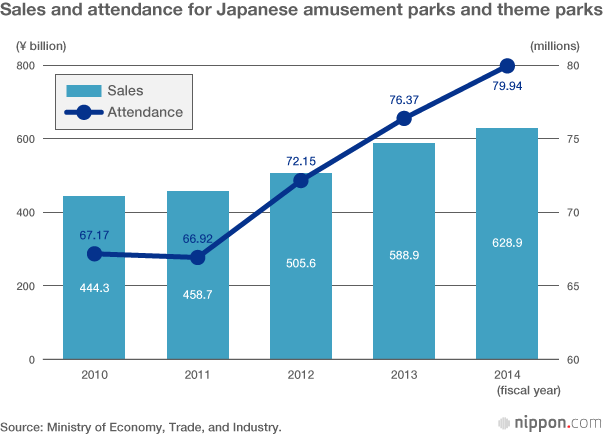 Attendance dipped slightly in the aftermath of the Great East Japan Earthquake of 2011 but rebounded the following year and has risen steadily since, no doubt bolstered by the growing influx of tourists from other countries. Government statistics also show a rise in the percentage of domestic household expenditures devoted to amusement park and theme park admissions and attractions.

Theme parks, where people can get away from their everyday cares, apparently have the power to attract and charm visitors of all ages from both near and afar.

(Originally written in Japanese by the editorial staff of Nippon.com. Banner photo: A ceremony at Tokyo Disney Resort marks the arrival of the 600 millionth visitor on April 12, 2014. © Jiji.)