Economy Science Technology Nov 30, 2015
Boosted by the weak yen and relaxed visa conditions, the number of foreigners visiting Japan has been rising rapidly and the total for 2015 is expected to reach 20 million. Among this number are more and more people seeking the advanced medical treatment and rigorous medical examinations available in Japan.

As the number of foreign visitors increases, tourism is becoming an increasingly important part of the Japanese economy. Among those arriving from overseas are medical tourists seeking treatment that is unavailable or more expensive in their own countries. While there is no precise data for recent years, a Ministry of Economy, Trade, and Industry estimate for fiscal 2012 put the total at 27,000, up 5,000 from the previous year.

Takahashi Nobuyoshi, director of the Japan Medical & Health Tourism Center of major travel agency JTB says that while actual numbers are not available it is reasonable to assume that the number of medical tourists in Japan is increasing in tandem with the overall increase in international visitors. That number has more than doubled over the past three years. Assuming that medical tourists have increased at the same rate, the current number would be on the order of 50,000 to 60,000. 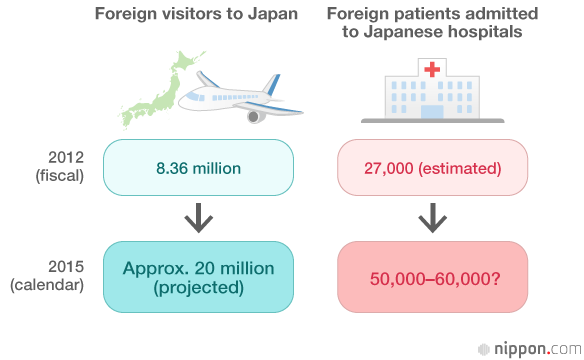 The Japanese government altered its course with regard to international patients in 2010, when the Democratic Party of Japan was in power. Health, including medical and nursing care, was positioned as a strategic field in the new growth strategy adopted by the cabinet and medical tourism was encouraged. In 2011 the DPJ government created a “visa for medical stay” that grants long-term stays to medical tourists and approval for visa holders to travel back and forth between their home countries and Japan. It also backed the foundation of Medical Excellence JAPAN, an organization that meets the needs of patients from other countries.

At the same time, language and cultural barriers and the need for balance with the national healthcare insurance system mean many healthcare institutions in Japan are cautious about internationalization. The Japan Medical Association has consistently opposed the push for medical tourism, citing problems with respect to the general principle that healthcare should not be for profit, and the prohibition of mixed medical care billing in the Japanese healthcare system.

Meanwhile, those medical institutions that are actively welcoming international patients see potential demand from Asian countries where economic growth continues, and aim to establish medical tourism as one pillar of future hospital management. As government efforts to keep medical costs down continue, raising the profile of Japanese medicine overseas could bring increased revenues from outside the domestic insurance system and greater usage for expensive medical equipment.

The chart below shows the nationalities of medical tourists in fiscal 2012, based on METI estimates. Director Takahashi of the aforementioned Japan Medical & Health Tourism Center says that of the customers they work with, “ninety percent are from China and close to ten percent from Russia. The proportions of health checkups and medical treatments are about equally divided. Most requests come from companies, and there are many cases in which medical checkups are included as part of incentive travel rewarding employee performance.” 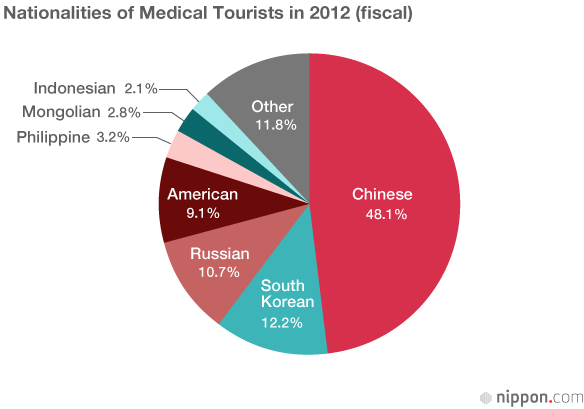 Kawakami Risa of Kameda Medical Center’s public relations office says that they had only about 50 patients from China in 2014, but a total of 108 from the beginning of 2015 through August, rising to 160 when reservations through December are included. In addition to complete medical examinations, there are many cases of breast cancer examinations and treatment. The cost for a complete medical examination is about ¥400,000 for an overnight stay and ¥450,000 for two nights, three days.

The government of Prime Minister Abe Shinzō is revising the policy of the previous administration, which prioritized acceptance of international patients. Rather than focusing on medical tourism, the current policy emphasizes international expansion of Japan’s medical technology and services. Specific targets in the June 2013 “Japan is Back” strategy include establishing Japanese medical institutions in about 10 locations internationally by 2020, mainly in developing countries, and acquisition of a ¥5 trillion market by 2030.

The aim in actively exporting Japanese medical services with government backing is to stimulate the growth of related industries including medical equipment, pharmaceuticals, and information systems such as remote diagnostics.

Kitahara International Hospital in Tokyo is building an emergency care hospital in Phnom Penh, Cambodia, with financial support from backers including the Japan International Cooperation Agency that is scheduled to open in February 2016. Another project headed by Hokuto Hospital in Hokkaidō provides diagnostic imaging services in collaboration with local hospitals in Vladivostok, Russia.

(Originally written in Japanese by Murakami Naohisa of Nippon.com and published on October 27, 2015. Banner photo: Chinese participant with electrocardiogram results at Kishiwada Tokushukai Hospital in Kishiwada, Osaka, in a trial run of a preventive medical checkup tour organized by Nankai Railway in December 2010. ©Jiji.)