Japan Falling Behind in Scientific Publishing

Science Technology Dec 21, 2015
The past ten years has seen a relative drop in the number of academic papers published by Japanese scientists. Over this time, Japan has slipped from second to fourth place, in terms of global share. Some worry that this trend will result in fewer and fewer Japanese researchers winning the coveted Nobel Prize.

If we look at the Japanese winners of the Nobel Prize in the natural sciences, most of their research dates back 10 to 30 years from the date they received the award, so many of the recent winners are gaining recognition for the results they began generating in the 1980s or 1990s. One cannot help wondering if Japanese scientists will be able to continue receiving the Nobel Prize at the same rate in the years ahead.

Overtaken by Germany and China, with South Korea Gaining Fast

Statistics from Thomson Reuters on publications in seven leading countries for five academic fields (physics, chemistry, biology, materials science, and space science) show that in 1982 the company had a total of 121,739 academic papers in its database, of which the United States accounted for 33,744, making it the leading country. Japan ranked second, with 12,534 papers published.

However, if we look at the figures in 2011, we see that Japan only ranked fourth, with 31,487 papers published. This places the country slightly behind third-place Germany, at 33,517, and far behind the two leading countries, the United States and China, which accounted, respectively, for 78,242 and 76,664. Meanwhile, South Korea has been quickly catching up to Japan. 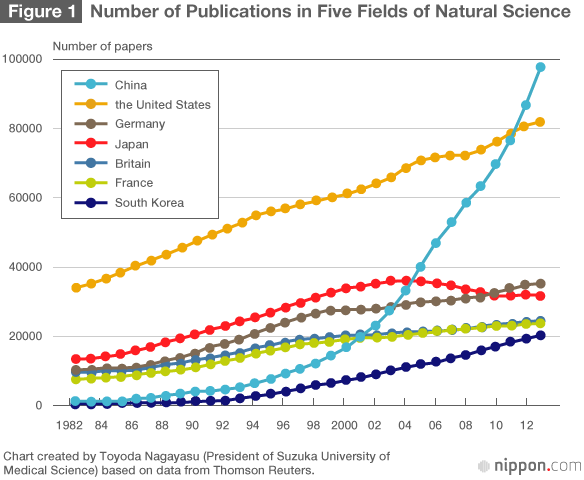 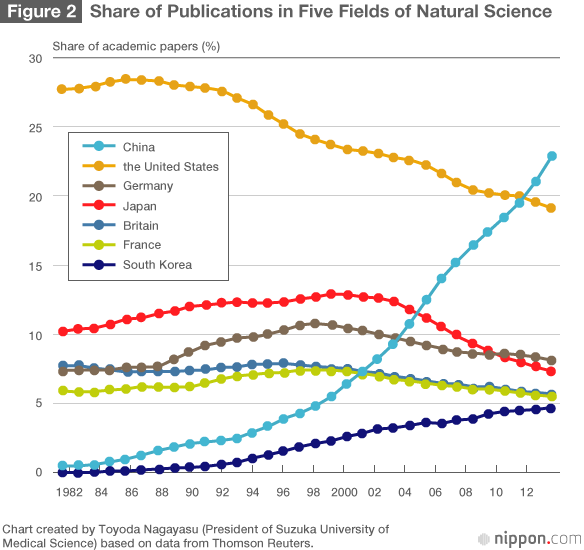 The president of Suzuka University of Medical Science, Toyoda Nagayasu, argues that the decline in Japan’s ranking reflects the reduction in government funding for research as well as the increase in the amount of time university faculty must now spend on non-research activities such as administrative tasks.

Maskawa Toshihide, winner of the 2008 Nobel Prize in Physics, was quoted as saying that, “since nine or ten people win the Nobel Prize every year, it is natural to expect that at least one would be from Japan.” But the expectation expressed in that theory is based on the global share of publications that Japan has had. That is to say, up until around 2001, Japan was in the envious position of having a 10% to 13% share of the world’s academic papers, ranking second.

President Toyoda argues that in order to raise the number of academic papers in the fields of natural science, it is necessary to increase the number of full-time researcher posts. In a telephone interview with Nippon.com, he noted that the way things are going, “Japanese scientists will probably only account for one of every 20 Nobel Prize winners 10 years from now.”

Ever since Japan’s national universities were reorganized as national university corporations to give them more autonomy, the administrative grants that the universities receive from Japan’s Ministry of Education, Culture, Sports, Science, and Technology have been cut by 1% annually. This has decreased the amount of research funding available and led to administrative staff reductions, which in turn places a greater burden on faculty. Some have pointed to the impact that this change has had on the output for academic papers.

Only a few of the top universities like the University of Tokyo or Kyoto University have ample research funds at their disposal. Most of the other national universities are forced to aggressively solicit outside funding from corporations and other organizations. This situation encourages research that focuses on highly practical, short-term results, in line with the demands of industry.

The 2015 World University Rankings published in the October issue of the Times Higher Education saw Japan’s leading institute of higher learning, the University of Tokyo, fall to third place in Asia, behind National University of Singapore and Peking University, after having been ranked the top Asian university in 2014.

The ranking is based on 13 criteria, including the number of citations of academic papers and the number of foreign faculty members. Education ministry officials said that Japanese universities were at a disadvantage in the ranking because it prioritized papers written in English.

Asian Universities in the Ranking