Japanese Restaurants On the Rise Abroad

Culture Feb 4, 2016
The number of Japanese restaurants outside Japan reached 89,000 in July 2015, up sharply from 55,000 two years earlier. Many of these restaurants serve dishes that depart considerably from what the Japanese would consider to be traditional taste, though, and some see a need for measures—spearheaded by the Agriculture Ministry so far—to boost the quality of these overseas eateries.

According to a survey by Japan’s Ministry of Agriculture, Forestry, and Fisheries, in July 2015 the number of Japanese restaurants in all markets outside Japan was nearly 89,000. This was up considerably from the 55,000 tallied in 2013 and more than triple the 24,000 counted in the 2006 survey. Behind this sharp increase is the spreading image of Japanese dishes like sushi and soba as healthy food. Another factor may have been the addition of washoku, or traditional Japanese cuisine, to UNESCO’s Intangible Cultural Heritage list in 2013. 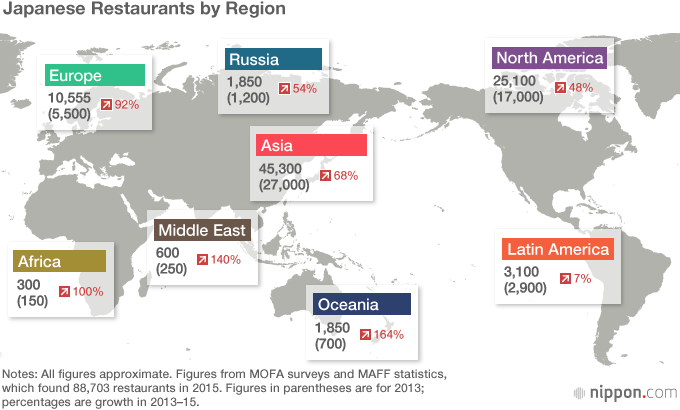 The latest survey was implemented via Japan’s overseas diplomatic establishments, which counted the number of Japanese restaurants listed as such in telephone directories and restaurant websites. The definition of Japanese cuisine is not necessarily clear-cut, though, and the statistics unavoidably include self-styled Japanese restaurants whose menus are far from authentic.

Japanese Among the Most Popular Cuisines Worldwide

Among the many ethnic cuisines in the world, where does washoku stand in the popularity rankings? In 2014 the Japan External Trade Organization conducted a survey on overseas consumers’ sentiments toward Japanese food in six emerging-economy cities: Bangkok, Dubai, Ho Chi Minh City, Jakarta, Moscow, and Saõ Paulo. Japanese cuisine was chosen as the most favorable foreign cuisine in Bangkok, Ho Chi Minh City, Jakarta, and Moscow. The survey covered 500 citizens in each of the six cities aged 10–59. But there may be a need to partially discount its results, given the fact that it was conducted by a Japanese semigovernmental organization.

A breakdown of the results for the four cities shows that 66.6% of the respondents in Bangkok and 50.4% of those in Jakarta chose Japanese cuisine. The tally came to 37.8% in Ho Chi Minh City and 35.4% in Moscow. In Asia, as well as in the United States and Europe, Japanese cuisine seems to be ranking alongside the other most popular picks, Chinese and Italian dishes, or coming in ahead of them in the popularity lists.

What are the most popular genres of Japanese cuisine? According to a JETRO survey conducted in December 2013, which covered a total of 3,000 citizens aged 10–59 in the six cities mentioned above, 35.3% of the respondents referred to sushi/sashimi as the Japanese meal they like best, followed by tempura (9.6%) and yakitori (8.7%). Contributing to sushi’s top spot in the popularity ranking were its healthy image and its status as a representative Japanese cuisine. Low-priced tasty foods, such as ramen and curry with rice, were also found to be highly popular especially among average restaurant-goers, with ratios of 8.6% and 5.1%, respectively.

An Action Plan for Quality

This global popularity of Japanese food has made the cuisine a popular one also for restaurant operators and cooks. Many markets have seen chefs switch from Chinese, Korean, and other offerings to Japanese food, which can offer considerable benefits in terms of higher customer numbers and higher per-customer income. In this process, though, the caliber of the food served at the average Japanese eatery has suffered at times. Japanese travelers and businesspeople stationed abroad often report unsatisfying experiences at self-styled Japanese restaurants staffed by chefs with insufficient training in the cuisine or making use of subpar ingredients.

Responding to this state of affairs, the Agriculture Ministry plans to create a system whereby private groups will train chefs in Japanese restaurants abroad and certify their sanitary management and cooking skills if they reach certain levels spelled out in the relevant guidelines. This is designed to spread knowledge and skills of authentic Japanese cuisine.

The ministry also plans to support Japanese food service companies advancing into overseas markets. To this end, it will conduct feasibility studies on overseas business launches, collect and share maps of commercial zones and other information, and send missions to explore the investment potential of the food service industry abroad. This outreach will also establish a system of “Japanese culinary culture ambassadors” to offer advice on ways to propagate Japanese food and culinary culture around the world. Furthermore, with cooperation from JETRO, the ministry will initiate a system to identify Japanese restaurants abroad willing to make more active use of Japan-produced ingredients in their dishes. These “Japanese culinary culture supporters” will receive information on authentic ingredients and training for employees.

These measures are part of the “Action Plan 10 for propagating the charm of Japanese cuisine,” a fiscal 2015 MAFF public relations initiative to share the attractiveness of Japanese cuisine and culinary culture. The Action Plan also calls for (1) carrying out projects, including top sales by the prime minister, in partnership with the ministries involved in implementing the “Cool Japan” strategy, (2) forming partnerships among the Ministry of Foreign Affairs, Japan’s overseas diplomatic establishments, the Japan International Cooperation Agency, and overseas restaurants, (3) publicizing aspects of the country’s culture through the “Culture Mix Package” in partnership with various overseas projects, (4) studying the creation of a logo certifying specialty Japanese food products, (5) dispatching information on the charms of washoku at home to ensure its inheritance by future generations, and (6) nurturing chefs who will breathe fresh energy into the inbound tourism market.

Agriculture Ministry officials hope to play a part in helping the number of washoku restaurants abroad to continue to rise and maintaining momentum in the worldwide Japanese culinary boom. The ministry, which aims to boost Japan’s exports of farm and fishery products and processed foodstuffs to the order of ¥1 trillion yen by 2020, sees the success of Japanese restaurants around the world as a key to achieving this goal.