Politics Jul 11, 2016
The ruling coalition of the Liberal Democratic Party and Kōmeitō won comfortably in the House of Councillors election on July 10, 2016. The LDP nonetheless ended one seat short of its first simple majority in 27 years.

The House of Councillors election on July 10, 2016, opened the door for potential constitutional change, as the ruling coalition and parties and lawmakers seen as supporting such a move now hold two-thirds of the total seats. Of the 121 seats available in yesterday’s election, the ruling coalition Liberal Democratic Party and Kōmeitō won 56 and 14 seats, respectively, for a total of 70. In doing so, they achieved Prime Minister Abe Shinzō’s target of winning a majority of seats up for election.

While the Democratic Party improved on a disastrous 2013 showing, it was still only able to win 32 seats. The Japanese Communist Party, meanwhile, consolidated its recent raised profile with six seats. Initiatives from Osaka also made progress by winning seven seats. The Social Democratic Party and People’s Life Party & Taro Yamamoto and Friends both held on to one of two contested seats, but Party for Japanese Kokoro and New Renaissance Party failed to gain a single seat.

Female candidates took a total of 17 electoral district seats and 11 proportional representation seats. This was an all-time high, besting the 26 successful women in the 2007 upper house election, but still brought their total to just 23.1% of the 121 candidates who won office this time around.

Voter turnout was 54.70%, which was slightly higher than the 52.61% recorded for the 2013 House of Councillors election, but still the fourth lowest ever for an upper house contest. Newly eligible 18- and 19-year-old voters took part in their first election since the voting age was lowered. 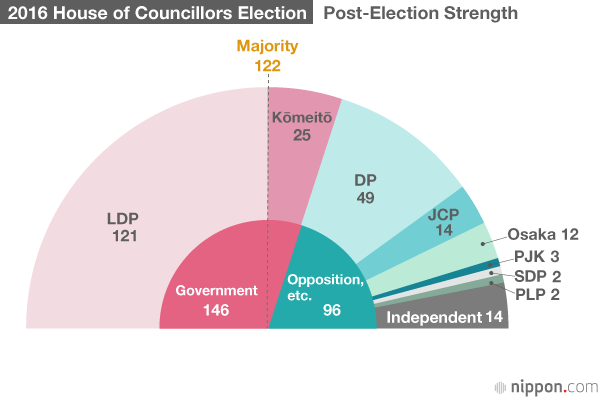 Path to Constitutional Change Not Straightforward

In the run-up to the election, the opposition parties DP, JCP, SDP, and PLP cooperated in efforts to block the two-thirds majority required to revise the Constitution by only fielding one joint candidate in each single-member district. The bloc consisting of the LDP-Kōmeitō coalition, Osaka, and PJK secured 161 seats in total, one short of the number required for a two-thirds majority. Support from favorably inclined independent lawmakers would be enough to potentially push ahead with changes to the Constitution, although the parties within the bloc are far from unified on this issue and the path to alteration would not be straightforward.

Abenomics and Prime Minister Abe’s decision to delay the consumption tax rise due to “risks to the world economy” also came under the spotlight during campaigning. Japanese media surveys found that voters were most concerned about social security, the economy, and childcare issues.

Results in the 32 single-member districts where LDP candidates faced off against contenders backed by four opposition parties are given in the map below. The LDP won 21 with the opposition securing the other 11 seats. This represents some improvement for the opposition compared with 2013, when the LDP achieved a near clean sweep of 29 seats. The Abe cabinet was also impacted: Minister of Justice Iwaki Mitsuhide was defeated in Fukushima, while Okinawa and Northern Territories Affairs Minister Shimajiri Aiko was voted out in Okinawa. 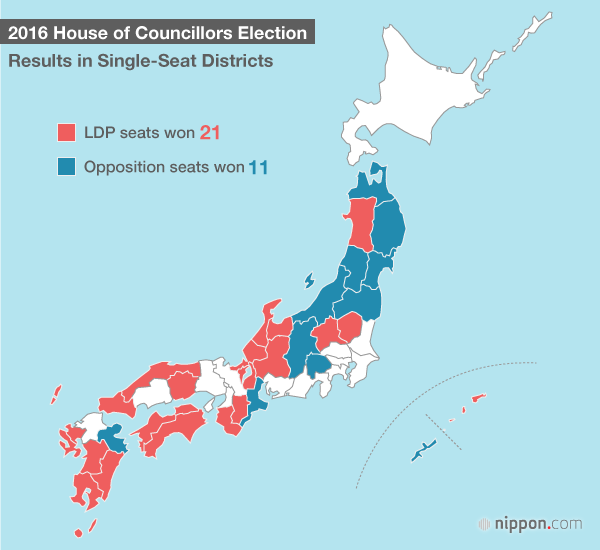