The Article 9 Debate at a Glance

Politics Aug 31, 2016
The escalating debate over amendment of the Japanese Constitution centers on the war-renouncing provisions of Article 9. Here we provide a concise outline of the key issues and positions in the Article 9 debate.

Article 9 and the Self-Defense Forces

The 1947 Constitution of Japan has been characterized as a pacifist constitution, mainly on the strength of Article 9, which explicitly renounces war and the maintenance of war potential and rejects Japan’s right to belligerency:

Article 9.  Aspiring sincerely to an international peace based on justice and order, the Japanese people forever renounce war as a sovereign right of the nation and the threat or use of force as means of settling international disputes.

In order to accomplish the aim of the preceding paragraph, land, sea, and air forces, as well as other war potential, will never be maintained. The right of belligerency of the state will not be recognized.

However, the meaning and intent of Article 9 have been hotly debated ever since the 1950s, when Japan set about building its own defense capability. Today’s Japan Self-Defense Forces comprise some 250,000 ground, maritime, and air force personnel, and Japan’s defense budget comes to more than ¥5 trillion, including outlays to support the realignment of US forces in Japan. 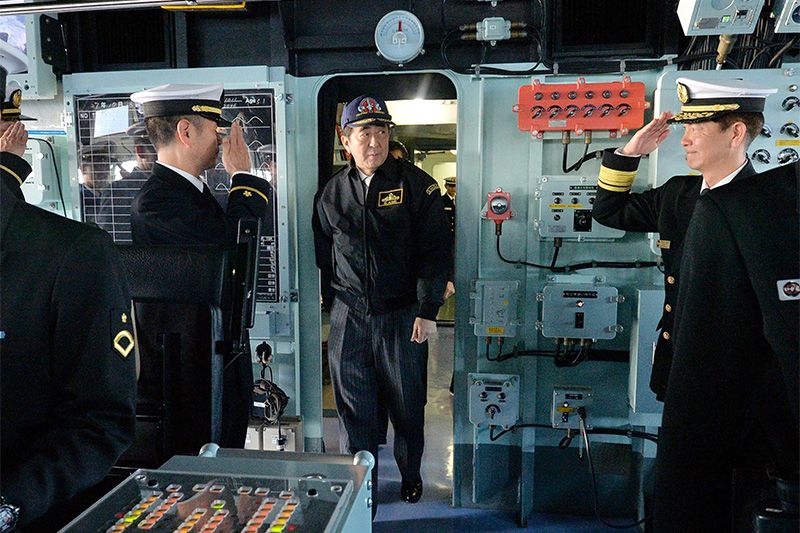 Prime Minister Abe Shinzō (center) inspects the bridge of the helicopter carrier JS Izumo in Sagami Bay during a review of the Maritime Self-Defense Force on October 18, 2015.  (© Jiji)

Over the years, the Japanese government has taken the position that the Constitution’s “renunciation of war” refers only to military aggression; it does not deny Japan the natural right to defend itself against threats to its own existence. The government has claimed that the Self-Defense Forces are constitutional because they are not “war potential” but the minimum capability necessary for Japan’s self-defense. Legislation passed since the 1990s has expanded the SDF’s mission further, clearing the way for its participation in numerous UN peacekeeping operations. However, the prohibition against “the threat or use of force” severely limits the type of personnel Japan can send overseas and the situations in which they can operate. In recent years, Prime Minister Abe Shinzō and others in the ruling Liberal Democratic Party have stepped up calls for amending Article 9 on the grounds that it is out of step with today’s security environment.

In the House of Representatives Commission on the Constitution, inaugurated in 2007, much of the debate over the amendment of Article 9 has centered on three key arguments raised by the LDP: (1) the need to clarify the constitutionality of the nation’s armed forces, (2) the need for explicit affirmation of the right to self-defense, and (3) the need for constitutional provisions concerning military and nonmilitary cooperation by Japan in international security efforts.

While the LDP insists that the Constitution must be amended to reflect today’s realities, politicians on the Left counter that the realities of Japanese security policy should be changed to reflect the provisions of the pacifist Constitution. Many moderates, meanwhile, maintain that the best way to adapt to changing circumstances is to continue to pass new laws under the current provisions of Article 9. In addition, a number of liberal politicians have called for constitutional revision with a completely different aim from the LDP’s: to more narrowly define and circumscribe the scope of self-defense and the duties of the SDF, including participation in collective security.

The Parties’ Positions on Article 9

In the spring of 2012, the LDP released a draft of an amended Constitution that explicitly affirms Japan’s right to self-defense and the legitimate role of Japan’s armed forces, which it would rename the National Defense Force. The LDP’s draft of Article 9 preserves the pacifist thrust of the existing paragraph 1, but it deletes paragraph 2, which prohibits Japan from maintaining war potential. In its place is a new section titled “National Defense Force,” which outlines the basic purpose and function of the military.

Kōmeitō, LDP’s longtime coalition partner, claims to be open to amendment of the Constitution, but so far it has stopped short of supporting any bid to revise Article 9. In 2015, the party helped the Abe cabinet push through controversial security legislation (effective as of last March) based on a new interpretation of Article 9 that permits participation in collective self-defense. When asked about amendment of Article 9 during a July 21 press conference, Kōmeitō President Yamaguchi Natsuo noted that his own party had defended the constitutionality of the new security legislation and said, “We have no intention of contradicting our own position.”

The center-right party Initiatives from Osaka vigorously supports amendment of the Constitution but maintains that the time is not ripe for revision of Article 9. The draft amendments released by the party last March focus exclusively on the right to a free education (including high school and college), adoption of a regional system of local administration (dōshūsei), and establishment of a constitutional court to rule on the constitutionality of laws.

Within the ideologically diverse Democratic Party, a substantial number of politicians favor amendment of Article 9 to explicitly delineate the scope of Japan’s right of self-defense. However, the party has denounced as unconstitutional the recently enacted security legislation (which sanctions collective self-defense), and has said that it will oppose any attempt by the current government to amend the Constitution.

The Japanese Communist Party firmly defends Article 9 and holds that Japan should ultimately aim for the SDF’s dissolution in keeping with that article’s provisions.

Issues and Positions in the Political Debate over Article 9

Source: Based on materials released by the House of Representatives Commission on the Constitution.

A survey on attitudes toward the Constitution (Kenpō ni kansuru ishiki chōsa) conducted by national broadcaster NHK last April found relatively low support for amendment of Article 9. Only 22.1% of those surveyed answered that “amendment [of Article 9] is necessary,” while 39.2% responded that “amendment is unnecessary.”

Among those who affirmed the need to amend Article 9, the reason most often selected was “the Constitution should state clearly that Japan can maintain the capability required for its self-defense” (55.1%), followed by “It should allow participation in UN-backed military operations” (22.6%). Among those who deemed amendment of Article 9 unnecessary, the most frequent reason was “It is the most important provision of our pacifist Constitution (65%), followed by “We can address issues by way of constitutional interpretation without resorting to amendment” (15.0%), and “It would open the door to the use of force overseas” (12.4%).(*1)