Society Apr 10, 2017
The Japanese population shrank again in 2016, as the number of births fell below 1 million for the first time since statistics were first compiled. This article examines the year's demographic data from the Ministry of Health, Labor, and Welfare.

Population statistics for 2016 released by the Ministry of Health, Labor, and Welfare reveal that the estimated number of births that year was 981,000, marking the first time for the figure to fall below the 1 million mark since statistics were first compiled in 1899.

In 2016, there were an estimated 1,296,000 deaths in Japan, which is the highest number since the end of World War II. This resulted in an overall population decrease of 315,000, indicating the increased pace of population decline in Japan.

Note: Calculations based on the estimated total population as of October 1, 2016 (125,245,000 people)
Source: Ministry of Health, Labor, and Welfare demographic survey 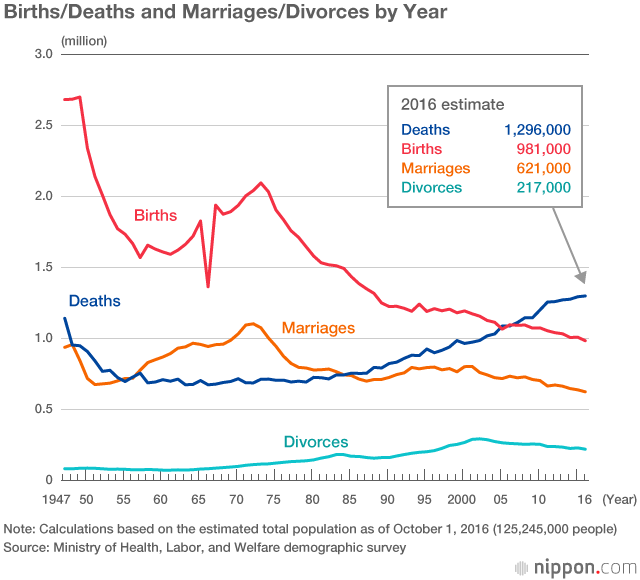 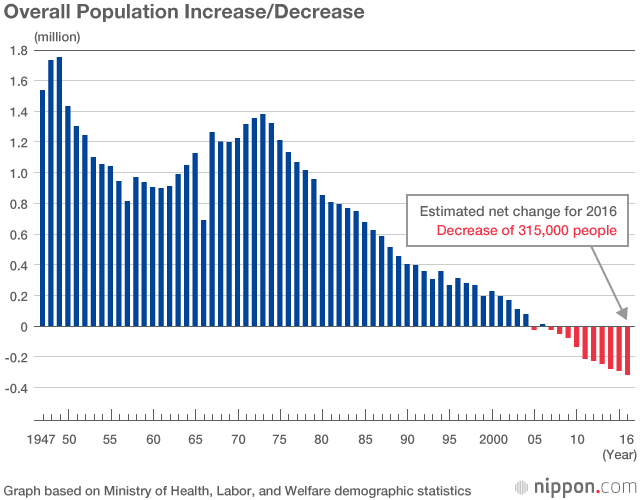 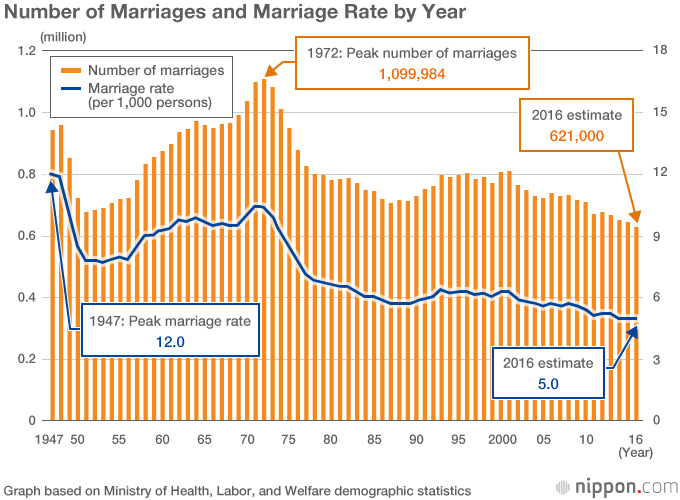 The table below compares the demographic data compiled by the Ministry of Health, Labor, and Welfare to data from eight countries in Asia, Europe, and North America. Japan’s marriage rate is still slightly higher than the rate in European countries, but its crude birth rate is the lowest among all the countries listed in the table.

(Apart from total fertility rate, numbers below are per 1,000 persons)

A century ago, Japan’s population stood at around 55 million, but by the late 1960s it topped the 100-million mark, eventually peaking in 2008 at 128.1 million (according to statistics from the Ministry of Internal Affairs and Communications). Since then, the population has been in steady decline.

At present, the population is falling at a rate of around 300,000 per year, but the pace of the decline is expected to increase. The 2012 Population Projections for Japan report, published in 2012 by the National Institute of Population and Social Security Research, estimates that the Japanese population will sink below the 100-million mark by 2048, to 99.1 million. And by 2060, the population is expected to have shrunk to 86.7 million. This means that during the 50 years from 2010 to 2060, a cumulative decrease of 41.3 million people is expected, which is around 32.3% of Japan’s current population. Moreover, the ranks of Japan’s working-age population (aged 15 to 64) will drop from the current level of 81.7 million to 44.2 million, a decrease of 37.6 million, or 45.9%.