Japan’s Defense Budget and the 1% Limit

Politics May 18, 2018
Japan’s defense spending has been on the rise since Prime Minister Abe Shinzō returned to power in December 2012, but as yet has not exceeded the unspoken limit of 1% of GDP.

Japan’s defense-related expenditures in fiscal 2018, including costs related to realignment of US military bases, totaled ¥5.2 trillion, marking an all-time high. Defense spending has been on the rise since Prime Minister Abe Shinzō returned to power in late 2012, but the level still remains less than 1% of Japan’s total GDP, which has been the unspoken ceiling for the nation’s defense spending.

The 1% limit was established through a cabinet decision made by the administration of Prime Minister Miki Takeo in 1976 to prevent Japan becoming a military superpower—although at the time the point of comparison was Gross National Product (GNP). The administration of Prime Minister Nakasone Yasuhiro abolished the official limit in 1987, but it remains a powerful unspoken concept.

During a meeting of the House of Councillors’ Committee on Budget in March 2017, Prime Minister Abe pledged to secure the budget necessary to efficiently maintain national defense in light of the current security environment in the Asia-Pacific region. He added that he did not think it necessary to keep defense spending below 1% of GDP. Meanwhile, President Donald Trump, during the November 2017 Japan-US Summit Meeting, expressed his desire for Japan to expand its purchases of US military hardware, saying this would create numerous jobs in the United States and bring greater security for Japan. Attention is now focusing on the next Mid-Term Defense Program (covering fiscal 2019 to 2023), to be released in late 2018, as a means of gauging Japan’s defense-related policy trends. 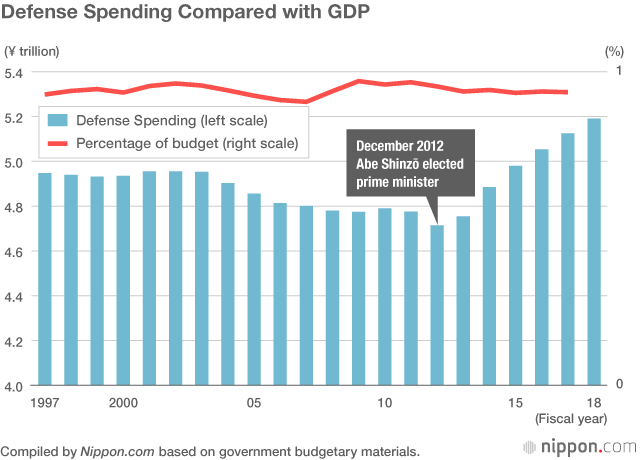 (Translated from Japanese. Banner photo: One of the cutting-edge F35 stealth fighter jets deployed at the Misawa Air Base in Misawa City, Aomori Prefecture © Jiji.)