Believe It or Not! Religious Adherents Outnumber People in Japan

Culture Jul 6, 2018
Japan had 182.2 million religious adherents as of December 31, 2016, according to a statistical study on religion conducted by the Agency for Cultural Affairs. Remarkably, this figure is 40% higher than the population of Japan, which stands at around 126 million.

An annual statistical study on religion conducted recently by the Agency for Cultural Affairs found that, as of December 31, 2016, there were 84.7 million believers in Shintō and 87.7 million Buddhists in Japan. When the number of Christians and adherents to other religions are added, the total becomes 182.2 million, or around 40% more than the country’s total population of 126 million. 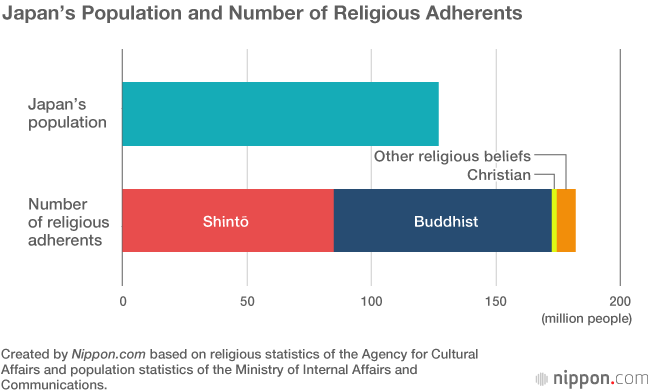 One reason the number of adherents exceeds the population is that, due to the freedom of religious belief in Japan and the separation of church and state, there is minimal government intervention in religious affairs. Religious groups provide statistics on a voluntary basis and are free to define “adherent” however they wish. In some past surveys, the overall number of adherents has even exceeded 200 million.

The Japanese view of religion also plays a part. In Japan, there was an intermingling between the indigenous Shintō faith and the Buddhism that was introduced from the Asian continent around the sixth century. The amalgamation of those two beliefs lasted for over a thousand years until the Meiji government ordered the separation of the two faiths in the late nineteenth century. There was no real awareness of being an adherent, since neither tradition had a conversion ceremony, but the practices of both took root in people’s lives in the form of daily rituals and seasonal events.

This is why Japanese people have no qualms about celebrating Christmas traditions, heading to a Buddhist temple a week later to ring out the year on ōmisoka (December 31), and making the first visit of the year to a Shintō shrine to pray for good fortune the next day. Japanese people will commonly hold a wedding ceremony in a church but have a Buddhist funeral. It is also not unusual for a house to have both Buddhist and Shintō altars, and for the family members to be parishioners of both faiths. For such reasons, quite a few people are counted as “adherents” of more than one religion, particularly Buddhism and Shintō. 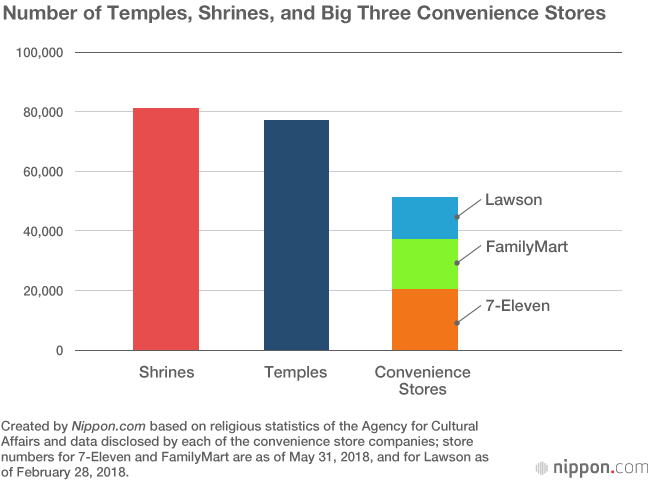 The table below lists the five prefectures with the most shrines or temples. Aichi Prefecture, the area that gave birth to the three great leaders who unified Japan—Oda Nobunaga (1534–82), Toyotomi Hideyoshi (1537–98), and Tokugawa Ieyasu (1543–1616)—is notable for having many shrines and temples. The leaders erected numerous religious buildings to worship local deities and house ancestral remains. (Translated from Japanese. Banner photo: A Shintō shrine located on the grounds of the Kongōbuji temple in Mount Kōya, which is the holy site for the Shingon school of Buddhism. © Pixta.)