Politics a Man’s Role in Japan?

Society Aug 6, 2018
As of the end of 2017, the ratio of female prefectural assembly members was a mere 10.1%. In May 2018, a law on promotion of gender equality in the political field was established; however, this aim remains far from being realized.

At the end of 2017 only 264 of the 2,614 prefectural assembly members across Japan were women, a mere 10.1%. According to the Ministry of Internal Affairs and Communications, Tokyo is the only region in which more than 20% of lawmakers are women (36 out of 126 members) with a ratio of 28.6%. Following that is Kyoto Prefecture with 19% (11 out of 58) and Shiga Prefecture with 16.7% (7 out of 42). Nine prefectures have a ratio of less than 5%, and Yamanashi, Saga, and Kagawa Prefectures each only have one female lawmaker.

The Japanese Communist Party was the only party with a higher ratio of female than male assembly members at 53.69%. In contrast, the ratio for the Liberal Democratic Party, which holds the greatest influence, is only 3.08%.

According to a 2017 Report by the Inter-Parliamentary Union, formed by national parliaments worldwide, Japan ranked 158 out of 193 countries. The level of women’s participation in politics is below par not only at the national but also at the local level. 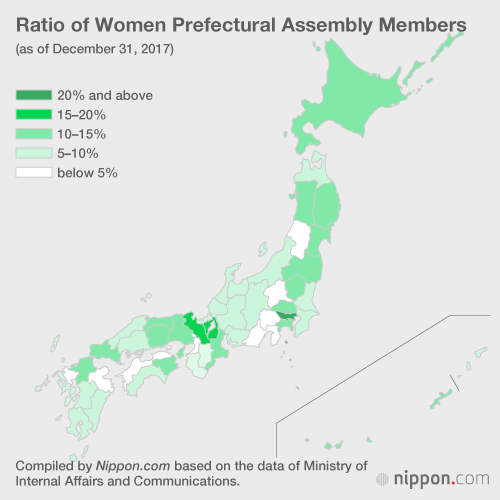 Only seven women have ever served as prefectural governor, including Takahashi Harumi in Hokkaidō, Yoshimura Mieko in Yamagata Prefecture, and Koike Yuriko in Tokyo who are currently in office.

In May 2018 the government passed a law promoting gender equality in politics through equal nominations of male and female candidates. Despite such efforts, Japan's political realm still lags behind the corporate world, including delays in establishing systems for maternity leave and childcare leave, and unsatisfactory provision of childcare support. In 2017,the issue drew attention when a female Diet member who announced she was pregnant met with criticism, such as “Why did you get pregnant while serving in office?” and “Aren’t you abandoning your responsibilities?” If pregnancy and childbirth are regarded as “abandoning responsibilities,” then politics is fated to forever being a man’s role.