Economy Aug 22, 2018
According to the 2017 White Paper on Fisheries, while the world’s fishery production has doubled in size over the last 30 years, Japan’s production has more than halved.

While the world’s fishery production volumes have doubled over the last 30 years, Japan’s volume in the same period has more than halved. According to the 2017 White Paper on Fisheries, globalization of distribution and greater concern for eating healthily have fueled the overall rise. Particularly in recent years, China and other Asian countries are now leading in production. However, former major fishing power Japan has fallen to eighth place in the ranking of marine fishery by country and region. 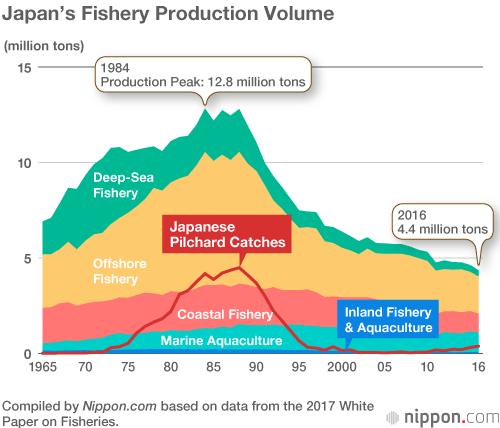 Japan’s fishing industry and aquaculture production peaked at top in the world in 1984 (12.8 million tons). It soon went into rapid decline, however, and continues to fall gradually today. In 2016, production fell by 6% to 4.4 million tons. The decrease since 1984 is thought to be due to reduced catches of Japanese pilchards through offshore “purse seine” fishing using nets. The Ministry of Agriculture, Forestry, and Fisheries indicates in its White Paper that “the main cause is changes in the marine environment.”

Japan’s Decline Balanced by Catch Increase in China and Indonesia

Japan caught 3.29 million tons in 2016, remaining in eighth place in the world ranking of fishery catches by country and region. China, which accounted for 20% of total catches (17.8 million tons), along with Indonesia (6.6 million tons), and the European Union (5.4 million tons) still have a huge lead. In the past 20 years, in the EU, the United States, and other developed countries and regions catches have remained at the same level or fallen. In comparison, catches in China, Indonesia, Vietnam and other developing countries in Asia are continuing to increase, while Japan’s share is shrinking.

2016 Catches in the World’s Fishing Countries and Regions

Compiled by Nippon.com based on data from the 2017 White Paper on Fisheries.