Economy Sep 6, 2018
Japan’s soft-power powerhouse anime had a successful 2017, as the industry reaped total revenues of more than ¥200 billion.

Japan’s anime industry revenues topped ¥200 billion for the first time in 2017. A survey of the country’s 255 anime production companies by Teikoku Databank found that their total revenues increased 8.2% from the previous year to ¥203.72 billion. This was the seventh consecutive year that revenues increased since 2011.

About 90% of the companies are headquartered in Tokyo, which is a striking level of concentration. Small and medium-sized companies accounted for the majority of revenue, capital, and number of employees. Further, 150 companies, or about 60%, were companies established after 2000. This data shows that the animation industry is buoyed by a proliferation of small companies with short histories.

Compiled by Nippon.com based on data from Teikoku Databank. 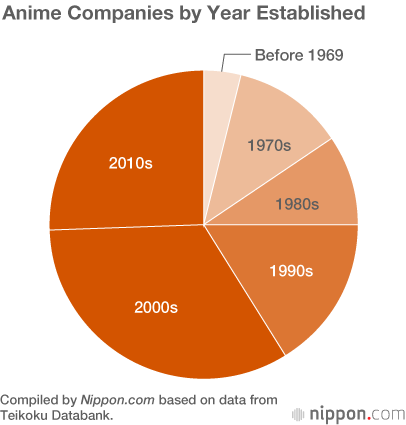 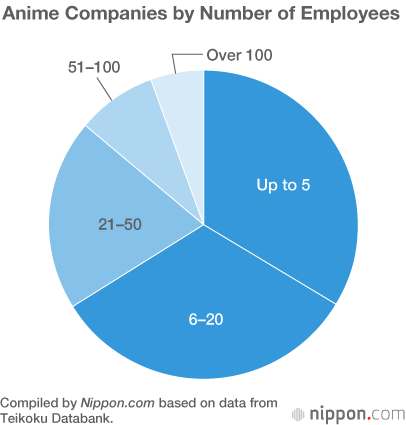 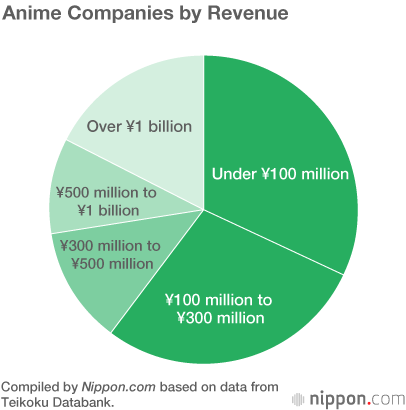 With the collapse of the anime bubble in 2006, a sharp decline in DVD sales created opportunities for startup companies in China, South Korea, and Southeast Asia, where production costs were low. As this trend took hold, competition for orders intensified. Consequently, the average revenue for Japanese companies dipped to approximately 60% of its 2007 peak of ¥1.175 billion.

In the last few years, there has been a growing number of crossovers between smartphone games and late-night anime programs. The increase in the number of productions was one factor in the 6.0% increase in average revenue to ¥808 million in 2017. Successive anime theatrical hits also played a part by contributing to the industry recovery that was particularly prominent at major studios. It was the first time in five years for the average to rise and it is now at 70% of its peak. 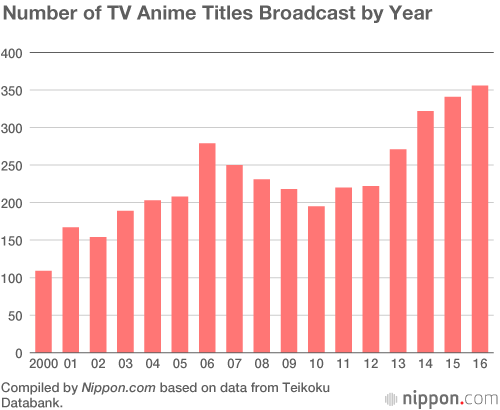 Managers are under considerable pressure, however, due to lack of proficient personnel, a surge in outsourcing expenses, overcrowding of production schedules, and pricing competition. Disparities have arisen between major production companies whose average revenues increased greatly, and the specialized studios they subcontract to, whose average revenues have had unremarkable increases.