Economy Oct 29, 2018
After oil crises in the 1970s, Japan aimed to become less dependent on fossil fuels and the Middle East. However, 40 years on there has been little progress.

Japan is 88.9% dependent on fossil fuels. Comprehensive energy statistics from the Agency for Natural Resources and Energy show that the composition of primary energy supply in Japan in 2016 was 25.4% coal, 39.7% oil, and 23.8% liquefied natural gas.

As a resource-poor country that suffered two oil crises in the 1970s, Japan has tried to diversify its energy sources in order to avoid excessive reliance on fossil fuels. The key to achieving this was the development of nuclear power plants. By introducing a pluthermal program based on the use of processed plutonium taken from spent nuclear fuel at power plants as a substitute for uranium fuel, it hoped to make effective use of a “semi-domestic” energy source.

However, the 2011 Great East Japan Earthquake led to the suspension of operations at nuclear power plants nationwide. Factors including stricter inspection regulations and opposition from local people means that as of October 1, 2018, seven and a half years after the disaster, only five nuclear power plants and nine reactors have been reactivated. Thermal plants powered by fossil fuels are being used to fill the gap in the energy supply. 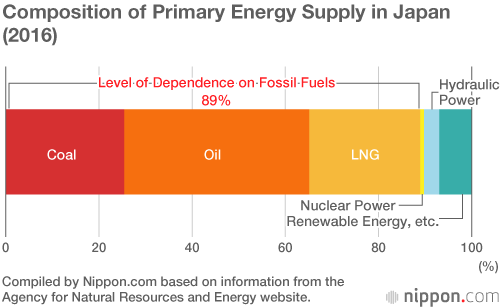 Even though the 2011 disaster was unexpected, Japan has been considering how to reduce dependence on fossil fuels and the Middle East since the 1970s. Yet after 40 years, there has been little progress. From the perspective of energy security, Japan’s aim is to build good relations with resource suppliers including oil-producing countries in the Middle East. However, there is always the risk that if the region falls into a state of turmoil, crude oil prices will rise and negatively affect Japan’s economy. 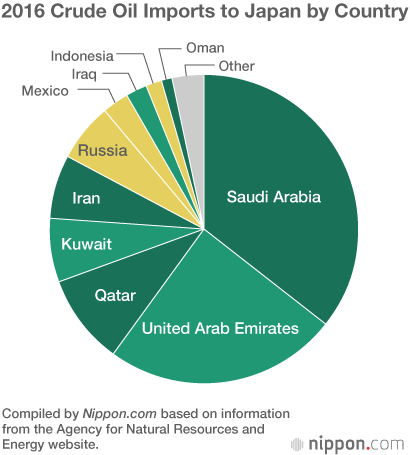 Meanwhile, the Paris Agreement, an international framework for global climate change countermeasures, seeks to curtail the use of fossil fuels that emit greenhouse gases and shift toward use of renewable energy like solar and wind power. If successful, the long-term issue of dependence on fossil fuels and the Middle East will be resolved and Japan can increase its energy self-sufficiency. However, the transition over to renewable energy is not advancing as expected due to the high costs of power generation.