The Treaty of Peace and Friendship between Japan and China was signed in 1978. From the following year Japan began providing official development assistance to China. That aid will conclude in 2018. Over the last 40 years, Japan has provided yen loans, grant aid, and technical cooperation, totalling ¥3.65 trillion in contributions.

The form of Japan’s ODA has changed in response to China’s development. When aid first started being provided in the 1980s, the focus was on development of large-scale economic infrastructure, including harbor maintenance, railroad installations connecting inland regions to coastal areas, and power station construction. On entering the 1990s, in response to progressive urbanization, emphasis shifted to water and sewage systems in major cities, gas supply, and measures to reduce poverty corresponding to an increase in disparity between coastal and inland areas. Then from 2000 onward, more effort was put into soft aspects of development such as environmental protection and human resource training. 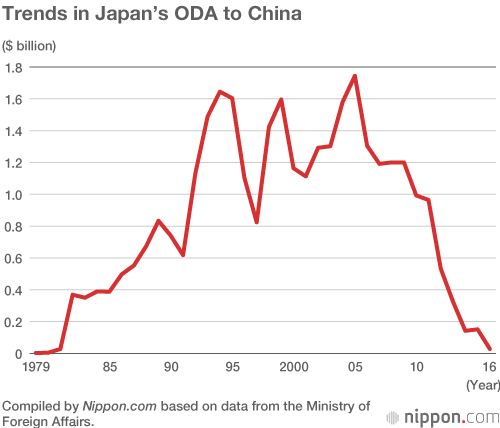 With the inauguration of Koizumi Jun’ichirō’s Cabinet in 2001, Japan and China relations entered a period known for its engaged economic and distant political ties, with China strongly protesting the prime minister’s visits to Yasukuni Shrine. In 2005, a number of anti-Japanese demonstrations were held in China. That same year, ODA to China peaked and then began to decrease due to worsening anti-Chinese sentiment in Japan and rapid economic development in China.

In 2010, China’s GDP surpassed that of Japan to become the world’s second largest economic power after the United States. Opposition in Japan to giving ODA to China grew, leading to a rapid drop in the amount provided. The focus in recent years has been on issues that also have a direct effect on Japan such as transboundary air pollution, infectious disease control, and food safety, and was mainly provided in the form of technical cooperation.

Now that China has become a major economic power, Japan will no longer give aid and this sees the start of a new partnership between the two countries.

Major Events in Japan-China Relations and ODA to China

1978   Chinese Vice Premier Deng Xiaoping visits Japan and the Treaty of Peace and Friendship between Japan and China is ratified.

2012   The Japan Government nationalizes the Senkaku Islands, leading to a succession of anti-Japanese demonstrations.

2018   Fortieth anniversary of the Treaty of Peace and Friendship between Japan and China. Prime Minister Abe Shinzō visits China. (Excluding participation in international conferences, this was the first official prime ministerial visit to China since Prime Minister Noda Yoshihiko’s visit in December 2011.)

Compiled by Nippon.com based on data from the Embassy of Japan in China, Ministry of Foreign Affairs, and other websites as well as various news reports.