Japan, Russia, and the Northern Territories

Politics Nov 29, 2018
Here we take a look at the main developments regarding the Northern Territories, islands at the center of a territorial dispute between Japan and Russia, since the 1956 Soviet-Japanese Joint Declaration.

On November 14, 2018, Prime Minister Abe Shinzō met with Russian President Vladimir Putin in Singapore and agreed to work toward a peace treaty based on the 1956 Soviet-Japanese Joint Declaration. The two countries are still yet to sign a formal peace treaty to officially end World War II hostilities.

The leaders have arranged to meet again in Argentina at the Group of 20, a summit of leaders from 20 major industrialized countries, which will be held from November 30. In addition, Prime Minister Abe will visit Russia in early 2019 for further talks.

The Soviet-Japanese Joint Declaration ended the state of war between Japan and the Soviet Union (now Russia) after World War II and restored diplomatic relations. This was ratified by the parliaments of both countries. At that time though, no agreement was reached over the return of the Northern Territories, stating only that the Habomai and Shikotan Islands would be handed over to Japan after a peace treaty had been signed.

The issue of the Northern Territories is the largest pending concern between Japan and Russia. The Soviet-Japanese Joint Declaration is regarded as the base point for those territory negotiations so far. President Putin recognizes the validity of the joint declaration; however, the strategy on how to return the islands to Japan and which country will hold sovereignty are still ”issues for consideration.” Russia is also showing caution about the possibility of US military bases or Japan Self-Defense Forces bases being established on the islands following their return to Japan, meaning the issues of both sovereignty and security are expected to hamper negotiations.

This is a summary of the main developments since the 1956 joint declaration.

Compiled by Nippon.com based on data from the Cabinet Office and Ministry of Foreign Affairs websites and various news reports. 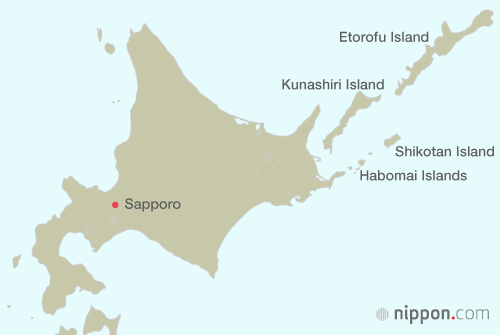 Compiled by Nippon.com based on information from the Northern Territories Issue Association, Cabinet Office website. Population figures are for Russian residents.