Economy Dec 18, 2018
The balance sheets of bus-line services nationwide are worsening amid rising labor and fuel costs. Bus lines in regions outside urban areas are struggling the most as they confront aging and shrinking populations.

A report by the Ministry of Land, Infrastructure, Transport, and Tourism paints a gloomy picture for companies operating bus lines. Combined revenue of operators in fiscal 2017 rose year-on-year by 1.0% to ¥732.2 billion, but expenditures increased 2.1% to ¥766.2 billion. The resulting current account balance of 95.6% represents a nearly 1 percentage point drop compared to the previous year. Business conditions have become particularly difficult for bus services in areas with declining populations, such as Hokkaidō, Tōhoku, and Shikoku.

Among 245 companies with a fleet of 30 or more buses that offer general passenger services, only 75 were in the black, 14 fewer than in the previous year. The number of firms in the red rose by 13 for a total of 170. The figures mean that a majority of companies, 69.4%, are running a deficit. Although the number of passengers serviced rose year-on-year by 0.5% to 3.9 billion, it is still less than 40% of the 10.1 billion served during the peak year of 1968. Rising personnel costs are also squeezing businesses.

Out of 21 regions listed in the report, only four have a current account balances over 100%. These are Chiba Prefecture (107.9%); the Musashi/Sagami area of Saitama, Tokyo, and Kanagawa Prefectures (104.1%); the Keihin area that includes the 23 central municipalities of Tokyo, and the suburbs of Mitaka, Musashino, Chōfu, Komae, Kawasaki, and Yokohama (104.4%); and the Keihanshin area comprised of Kobe, Kyoto, and Osaka (101.3%). Regions that fell far below the 100% level include Shikoku (68.6%), the Uetsu that includes Akita, Yamagata, and Niigata Prefectures (76.7%), Tōhoku (72.3%), and northern Hokkaidō (72.9%). The main urban areas averaged a current account balance of 102.5%, whereas other regions had an average of 86.1%. 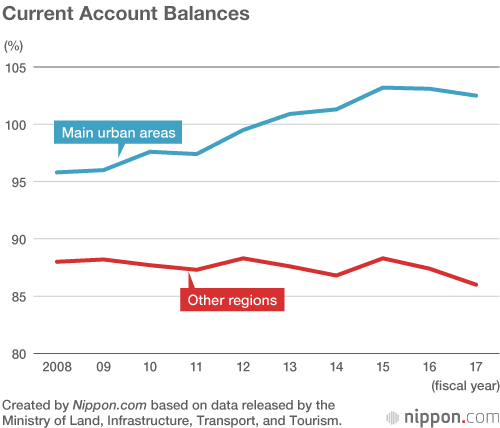 In provincial areas, bus services are a vital lifeline for elderly nondrivers in particular, and local governments frequently subsidize services to keep them running.

The situation is hardly any better for bus services in urban areas, and many are struggling to be profitable. Fiscal 2017 figures released by the Tokyo Metropolitan Bureau of Transportation for the 127 lines of its Toei Bus service reveal that 81 lines were in the red while just 46 were turning a profit. Normally, the task would be to improve revenue to shift some lines from the red into the black, but with the entire industry facing a chronic shortage of drivers, Toei Bus is even having to reduce services for profitable lines.