Japan’s Great Buddhas in the East and West

Culture History Guide to Japan Dec 19, 2018
The Great Buddhas of Nara and Kamakura in the west and east of Japan are both impressive, although the former is considerably larger.

Since Buddhism was first introduced in Japan around the sixth century, a number of Daibutsu, or Great Buddha statues, have been built to pray for national peace and stability—or to hope that everyone from the highest to the lowest can attain a good, rich life. Many Japanese will automatically think of the statues in Nara and Kamakura, which are designated as national treasures. Both are impressive, sitting in their peaceful poses, although the Great Buddha in Nara is greater in size and weighs twice as much.

Compiled by Nippon.com based on data from the Kōtoku-in temple in Kamakura and Nara City Tourist Association websites. 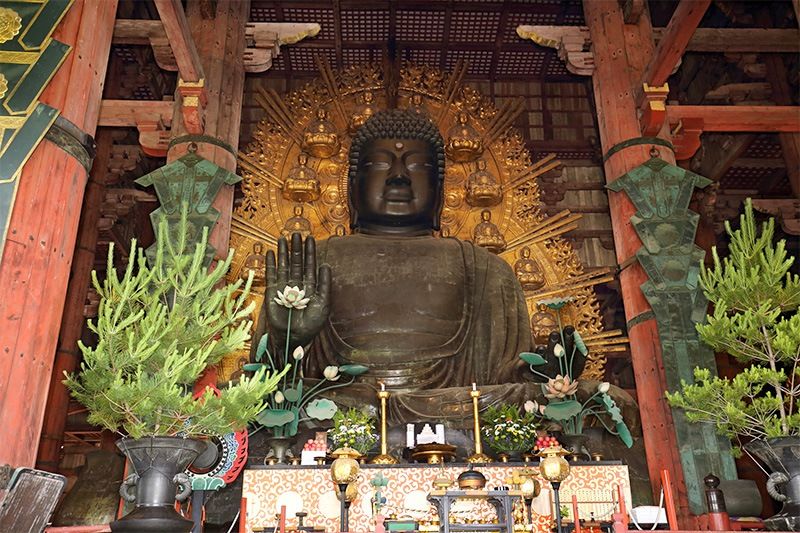 Emperor Shōmu requested the construction of this Daibutsu in in the hope of using the power of Buddhism to suppress social unrest due to political change and rebellion, and to protect against epidemics and damage caused by natural disasters. In 752, an eye-opening ceremony was held, ritually imbuing a spirit into the statue. The Daibutsuden Hall, where the Great Buddha is enshrined, was burnt down twice during battles and the statue also suffered damage. The hall was reconstructed during the Edo period (1603–1868) and is the largest wooden structure in the world.

In the northeast part of the hall is a pillar with a hole in it, which is popular with visitors—especially smaller children, who fit through it most easily—because it is said that if you crawl through it, your wish will come true. 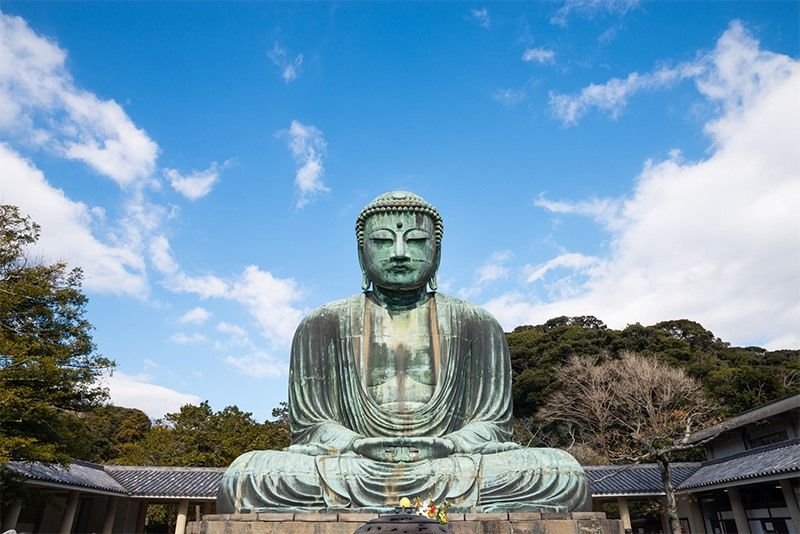 Construction of this Great Buddha began in 1252 and took approximately 10 years to complete, but the reason why it was built and details such as the date of the eye-opening ceremony are unknown. Many Great Buddha statues are enshrined in halls; however, the one at Kamakura is unusual as it is sits out in the open air. Although there was a Daibutsuden Hall at first, it was destroyed several times by typhoons and earthquakes, so for more than 500 years since 1498, the statue has been open to the elements. While it has sustained damage from being outside, this Great Buddha set against a blue sky possesses a different kind of beauty to that of one under a roof.

As well as viewing the statue from the outside, for a ¥20 entrance fee, visitors can view it on the inside too. It is interesting to see the repair marks that cannot easily be seen from the outside.

By size, the largest such statue in Japan is the Ushiku Great Buddha in Ibaraki Prefecture, which measures 120 meters in height, including the base. It is around three times the height of the Statue of Liberty in New York and is equivalent to a 30-story high-rise building. However, as it was only completed in 1992, it is not considered as the third of the three Great Buddhas.