Culture Lifestyle Apr 29, 2015
Karaoke was invented in Japan in the 1970s and has now spread all over the world. Learn more about the karaoke experience in its original birthplace.

How to Enjoy Karaoke in Japan

When you enter a neon-lit karaoke venue in Japan, you head first for the reception desk. Say how many people are in your group and how many hours you plan to be there, and a staff member will guide you to a room. (Unlike karaoke bars commonly seen in the United States, where all customers take turns singing in one large room, Japanese karaoke shops have private spaces for groups of all sizes.)

Searching on a touchscreen controller.

Order food and drink, pick a song, and sing along with the accompanying music. Most karaoke equipment works in the same way. You can either make a selection from a thick songbook and type the number into the controller or directly choose the song using the touchscreen. After you transmit the information to the machine, the music for the songs automatically plays in the order that you choose.

There are more than 100,000 songs in a typical karaoke songbook, ordered by artist and title, and the controller offers various ways of searching. Besides standard Japanese songs, there are hits in English, Chinese, and Korean, as well as anime themes.

Karaoke was originally sung to music recorded on cassette tapes using printed lyrics, but modern machines pump out digital music with video accompaniment and display the lyrics onscreen. It is possible to change the music key and speed, add echo and other effects, or include the voice track for practice purposes. Some machines can grade singers on their ability to hit the notes. And some venues add to the party atmosphere by providing tambourines and maracas, and even costumes for singers who really want to get into the act.

Venues charge by the hour rather than the number of songs. Prices vary depending on when you go. When there are fewer customers, such as on a weekday afternoon, karaoke is cheaper than in the evenings or on the weekend. There are also a wide range of venues, with different kinds of room and levels of service to match any budget. As many venues are open 24 hours a day, it is not uncommon to go to karaoke after drinking at a bar or to sing until dawn after missing the last train home. And some venues have all-you-can-drink plans for those who have not drunk enough already. 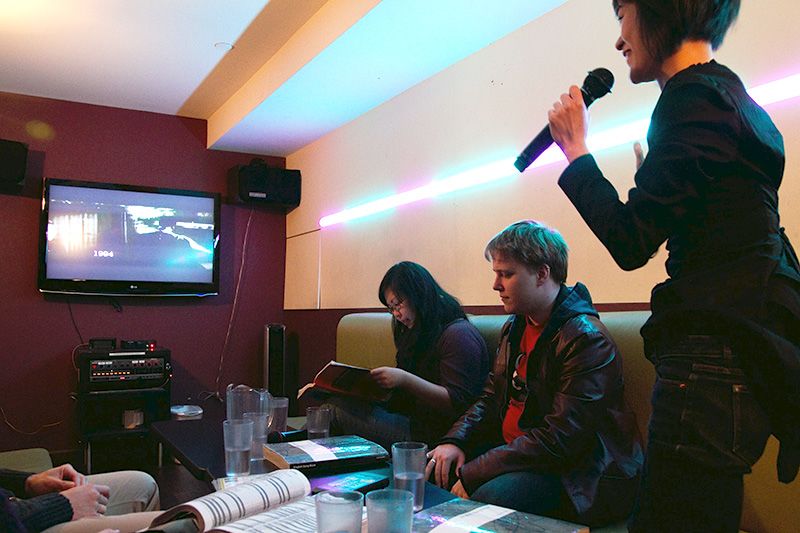 Sing along or plan your next song.

The first karaoke singers faced large audiences in bars or hotel banquet rooms. However, 1985 saw the introduction of “karaoke boxes,” converted from shipping containers. This made it possible to sing in a small space filled only with friends or family. As many Japanese people are shy and reluctant to croon in front of strangers, these private boxes soon caught on.

From the 1990s, separated and soundproofed karaoke rooms in buildings became the norm. At around the same time, karaoke became increasingly popular among teenagers looking for a new way to enjoy their favorite songs.

Karaoke became a national pastime as a fun way to spend time with friends, but Japan is now experiencing a quiet boom in solo karaoke. As some go to let off steam and some to train their voices, there are an increasing number of dedicated one-person karaoke rooms. So even if you are traveling alone in Japan, don’t feel you can’t enjoy the karaoke experience!