Culture Lifestyle Jun 6, 2015
It seems like you’re never far from a vending machine in Japan. The convenient points of sale come in innumerable varieties, providing food, drink, and more.

All Sorts of Refreshments

Vending machines seem to be everywhere in Japan, where they account for more than ¥5 trillion of sales each year. Because they are rarely vandalized or broken into, they are seen by some as a symbol of the country’s safety.

The most typical varieties sell water, soft drinks, coffee, and sometimes cans of ready-to-eat soup, while machines for beer and other alcoholic drinks are also common. For food, there are often machines selling snacks and ice cream, particularly at train stations.

Cut apples (left) and bananas (right) are some healthier choices to be found in vending machines.

Some less regularly encountered kinds perform a little internal preparation, adding boiling water to cup noodles or heating frozen food like rice balls and fries. Machines serving up still more complex dishes, like curry with rice and pickles, may leave you scratching your head, wondering exactly what goes on inside. And machines vending fresh food like fruit or eggs can occasionally be found away from urban centers.

A countryside tent containing an egg vending machine, where you can pay ¥300 for 20 farm-fresh eggs.

Thoroughly chilled cans and bottles line up alongside piping hot beverages in the standard drink machines, so you can choose refreshment to match your mood or the day’s weather. Most drinks are pre-prepared, but some machines dispense freshly ground coffee or cups of soft drinks with ice. 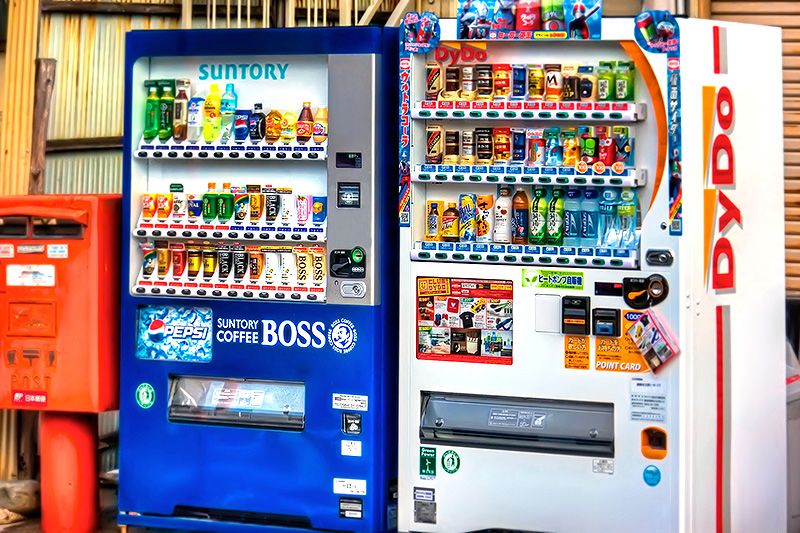 Hot (with red labels by the buttons) and cold (blue) drinks from the same machines.

More Than Food and Drink

Recently, vending machines for SIM cards have arrived on the scene. These machines have instructions in English and Chinese on how to register through either the built-in touch panel or passport scanner, so customers can connect to the Internet in a matter of minutes. 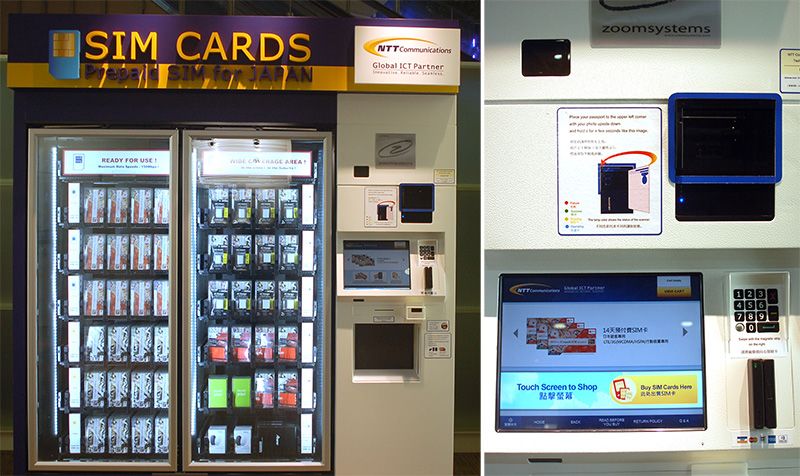 There are many more kinds of vending machines, including those selling cigarettes and transportation or venue tickets. Inside the entrances to low-cost restaurants, there are often machines where you buy meal tickets to hand over to staff. And if you go looking, you might discover more unusual automatic vendors providing business cards or personal seals made on the spot, magazines, toys, and even umbrellas. 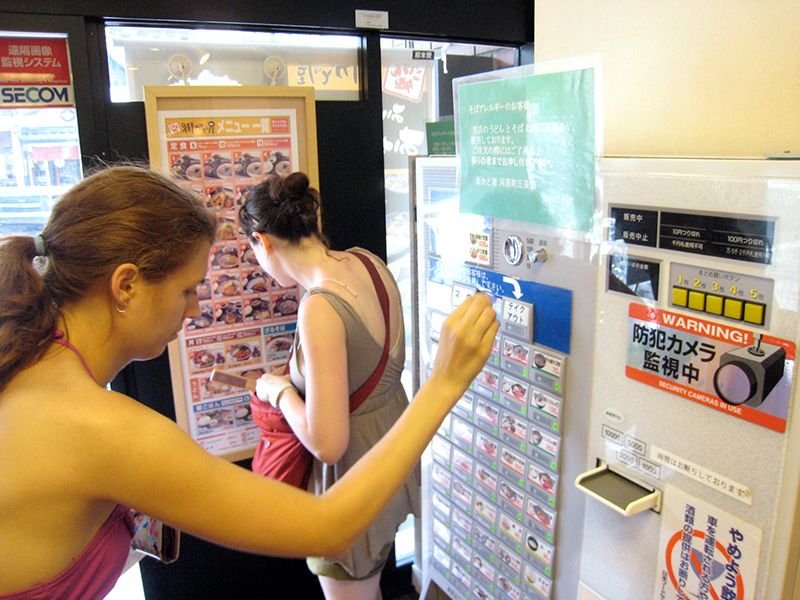 A meal ticket machine at a restaurant in Kyoto.

An increasing number of vending machines accept electronic money, whether in the form of Suica or similar cards used primarily on public transport or via mobile phone services. Another kind of card is needed to buy cigarettes, which cannot legally be sold to anyone under 20 years old. Most cigarette vending machines will not sell to customers unless they press a special Taspo card against the electronic reader, although with some machines it is possible to use a driver’s license.

Vending machines are popular because they are convenient and easy to use. In Japan, they are found in stations, hotels, hospitals, amusement parks, and commercial buildings, or simply by the side of the road. There are over 5 million machines around the country, according to the Japan Vending Machine Manufacturers Association. 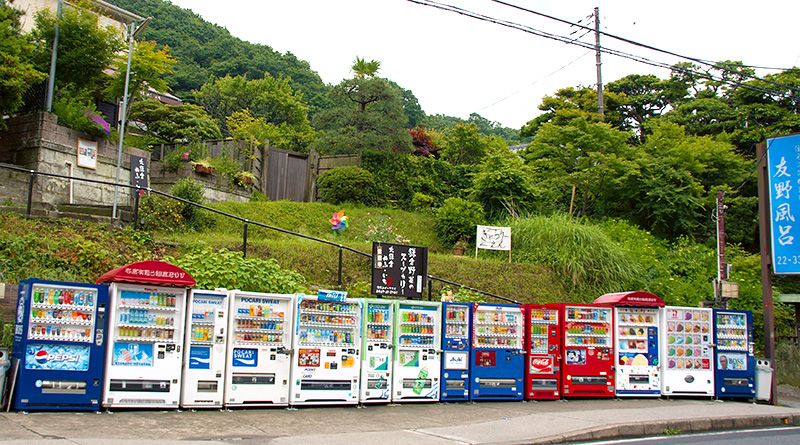 A total of 14 machines lined up in Kamakura, Kanagawa Prefecture.

Efforts to make drinks machines more environmentally friendly have succeeded in reducing their average annual power use by 70% over the last two decades. Some machines stop cooling functions at peak times for power usage, while others pump heat generated through cooling to warm coffee and other hot beverages.

Spurred on by the frequent occurrence of earthquakes in Japan, another new development is the spread of disaster-relief vending machines, particularly in public facilities. These are able to keep working through power cuts, can be remotely ordered to dispense drinks at no charge, and may even have a screen with the latest disaster information.

The world’s first vending machine is believed to have been a holy water dispenser invented in ancient Egypt by Hero of Alexandria around 2,000 years ago. The oldest existing Japanese vending machine was built into a 1904 mailbox and sold stamps and postcards. In the 1960s and 1970s, Coca-Cola rolled out huge numbers of machines throughout Japan, shaping the country into the vending machine giant it is today.

And vending machines continue to evolve. Next-generation types have LCD touch panels for selecting your drink. One recent machine even uses facial recognition technology to determine customers’ age and gender before making recommendations—although it is quite up to you whether to select the drink you are offered! 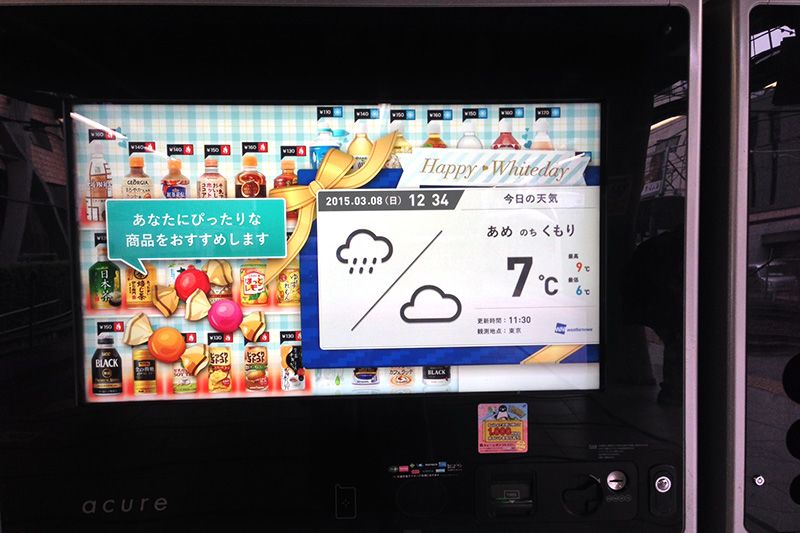 This vending machine suggests drinks based on the day’s weather.