Sports Dec 25, 2018
Each year amateur and professional teams of runners compete in various long-distance relay races called ekiden. The most prestigious of these is the grueling two-day Hakone Ekiden held on January 2 and 3.

Ekiden are long-distance relay races. Originating in Japan, the competitions pit teams of runners against each other, with individual racers completing different section, or “stations,” of the course in order. Instead of a baton, competitors at the end of each leg pass a sash called a tasuki that identifies the current racer to the teammate who is running the next section of the race. Various amateur and professional events are held in Japan throughout the year, the most popular of which are broadcast on national television.

There is no standard distance or number of sections for ekiden, although competitions generally have between 5 and 10 legs ranging from 5 to 20 kilometers in length. Team size varies according to how many legs there are, and runners are selected for each leg according to its gradient, length, or terrain. The narrow tasuki links runners of a team together between stages, and in spirit across the entire race. Frequently emblazoned with the team name, the sash must be passed by hand—throwing it results in disqualification. Ekiden are typically associated with road running, but there are also numerous cross-country events. 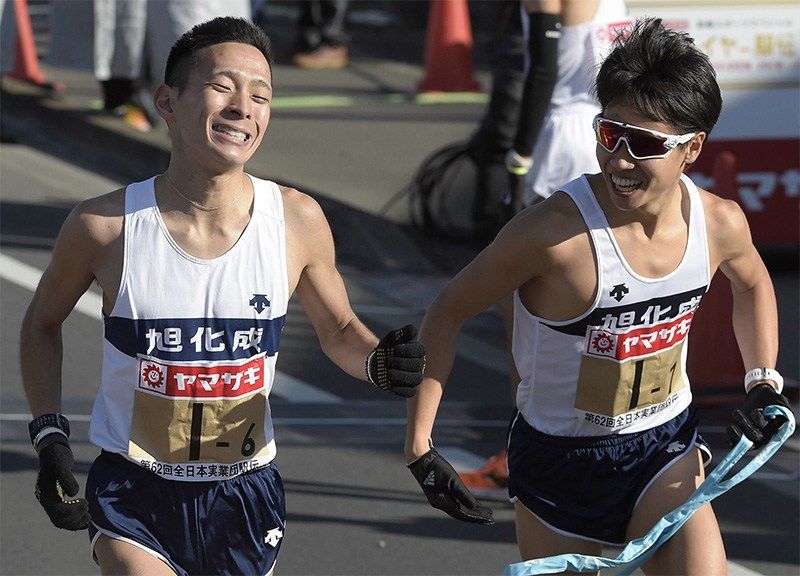 Ichida Hiroshi of Asahi Kasei passes his team’s sash or "tasuki" to Yorizaka Tetsuya after finishing the sixth leg of the 2018 New Year Ekiden in Gunma Prefecture. (© Jiji)

The first ekiden was held in 1917 to commemorate the fiftieth anniversary of Tokyo becoming the capital of Japan. The Tōkaidō Ekiden started at Kyoto’s Sanjō Bridge and stretched the roughly 500 kilometers to Tokyo, concluding after three days at the banks of Ueno’s Shinobazu Pond. The sport has proliferated, and Japan now boasts some 100 competitions. The peak ekiden season is from November to March.

The New Year period is strongly associated with ekiden and is when two of the year’s top events are held. The most prestigious of these is the Hakone Ekiden, a two-day competition on January 2 and 3 that dates back to 1920. The 217-kilometer contest pits university teams against each other on a 10-leg course stretching from Tokyo’s Ōtemachi to Hakone in Kanagawa Prefecture and back again. On day one, runners contest the first five sections, the most taxing being the fifth leg, a grueling 800-meter climb up winding roads. Day two begins with a battering descent back down the mountain as competitors race along the same route back to Tokyo.

The number of teams qualifying for the event has varied over the decades, but in recent years around 20 universities has been the norm. Teams finishing in the top 10 earn an automatic berth in the following year’s race, while those placing eleventh or below must contend with other schools for a spot in a closely watched qualifying race.

The other famed January race is the New Year Ekiden held on New Year Day. Established in 1957, it features 37 professional teams that include some of Japan’s top male long-distance runners. The race takes place in Gunma Prefecture and follows a 100-kilometer course divided into seven legs. 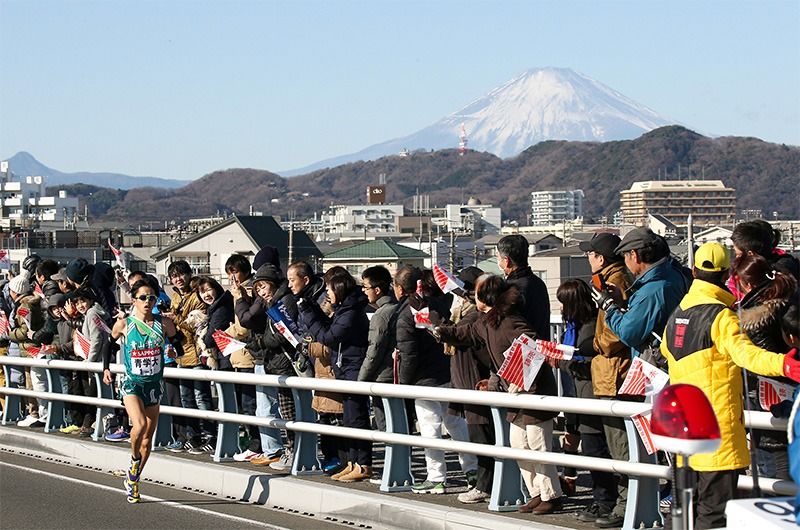 Other popular competitions include the Hiroshima Men’s Ekiden, featuring mixed-age teams, and the highly competitive Inter-Prefectural Women’s Ekiden. There are also national high school championships for men and women.

Most ekiden are run in a single day, although there are some multi-day, ultra-long-distance events. One of the largest was the Round-Kyūshū Ekiden, which was held until 2013; the race’s 739.9-kilometer course looped counter-clockwise around the island from Nagasaki to Fukuoka, had 51 sections, and took eight days to complete.