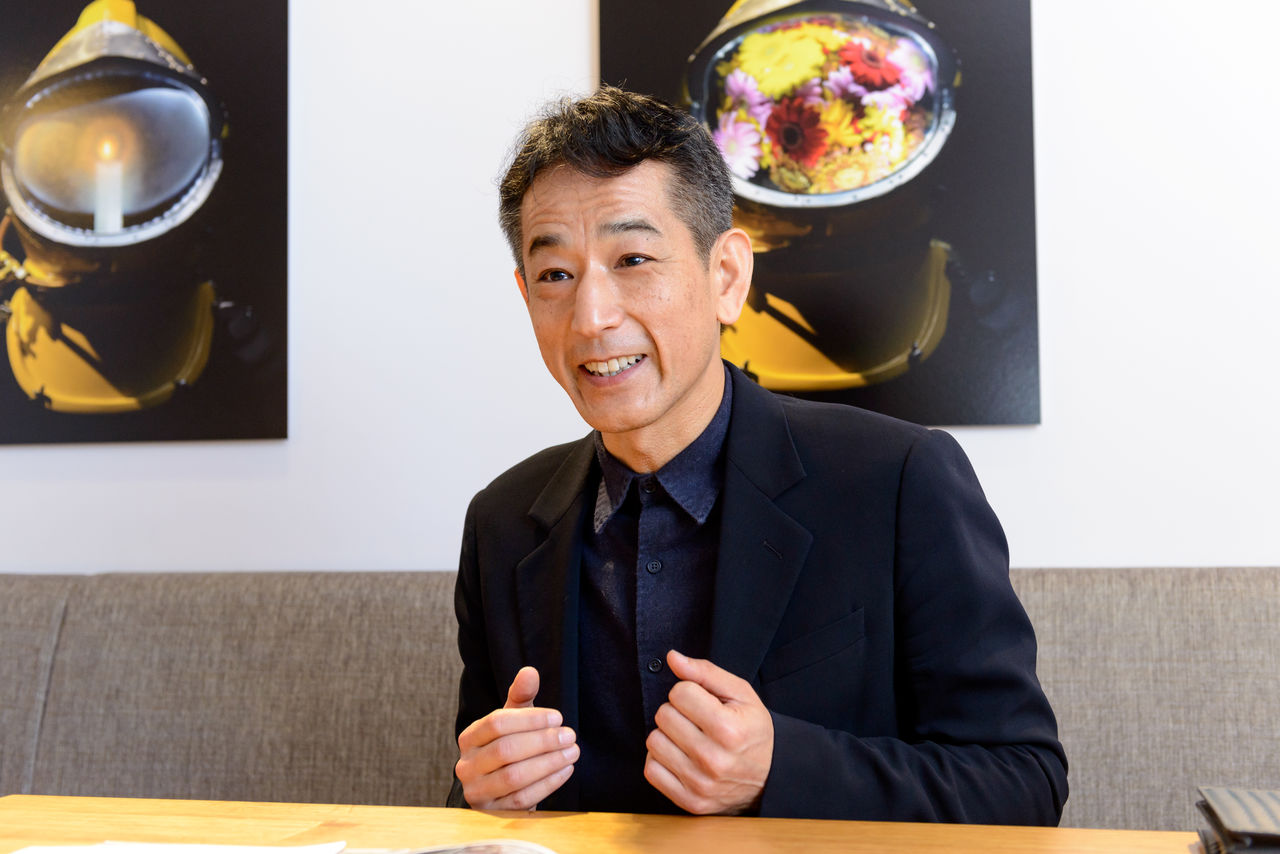 Breakfast Around Japan: A Culinary Adventure

Design Travel Jul 11, 2018
It took a true innovator to reject the scrap-and-build approach that has dominated commercial development in Japan for decades and discover new value in the “relics” of the 1960s and 1970s. Entrepreneur Kajiwara Fumio, the driving force behind Anteroom Kyoto and other innovative hotels, shares his views on renovation, hospitality, and community revitalization.

Chief executive officer, UDS Ltd. and UDS China. Born in 1965 in metropolitan Tokyo. Graduated from the Tōhoku University Department of Architecture. In 1992, launched Urban Design Systems, predecessor of UDS Ltd., dedicated to the creation of new aesthetic, social, and economic value through the integrated planning, design, and management of innovative hotels and other commercial properties.

Kajiwara Fumio’s firm UDS has taken a highly unconventional approach to commercial property development through its emphasis on renovation and innovation, as well as its vertical integration of the planning, design, and management processes. Hotel Anteroom Kyoto, opened in 2011, embodies the unique merits of this approach.

KAJIWARA FUMIO The building was originally a student dormitory attached to a Kyoto yobikō.(*1) Many of these schools have been obliged to downsize or shut down as the nation’s school-age population continues to shrink. The building owner came to UDS wondering if there was some way of repurposing the property.

At the time, the south side of Kyoto Station was commercially dead, notwithstanding its proximity to the train station. It lacked hotels, cafes, and other hubs of community activity. We wanted to build a hotel that would change the dynamic by channeling tourist and commercial traffic to the neighborhood.

My background is in archtectural design, so I understand the desire of architects to create new buildings from scratch. But Japanese cities are chockablock with concrete buildings that were built to last for at least fifty, sometimes a hundred years. I began to ask myself why we needed to keep building more and more of them, even as the population dwindled. I was also acutely aware of environmental issues, and I felt that, if I was going to be involved in property development, I wanted to do it in a way that minimized the impact on the environment. The answer, it seemed to me, was to make the most of what we already had.

With Hotel Anteroom, we rejected the scrap-and-build approach and opted instead to renovate and convert an older building. Our challenge was to win people over to the proposition that “old is cool.” 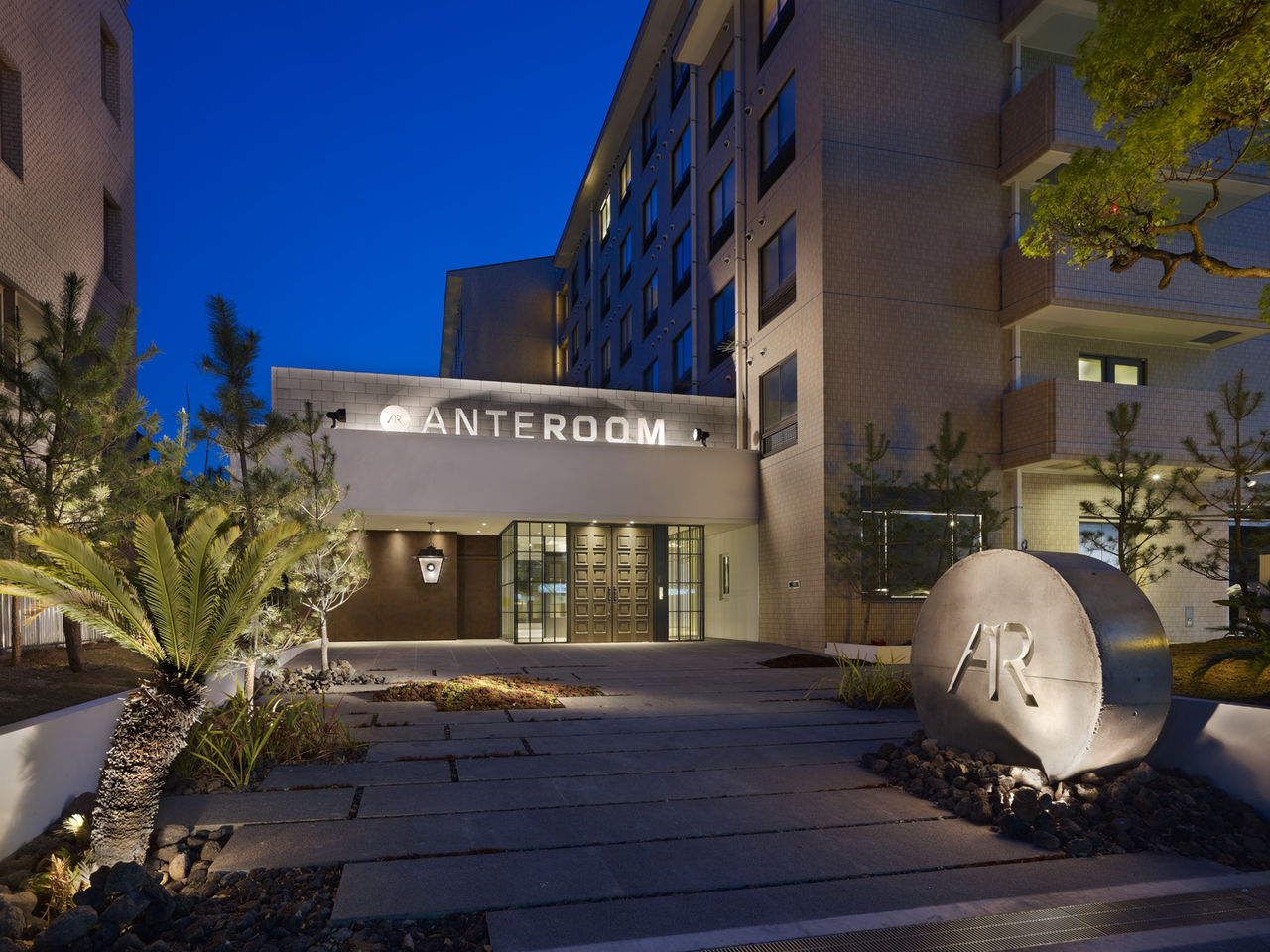 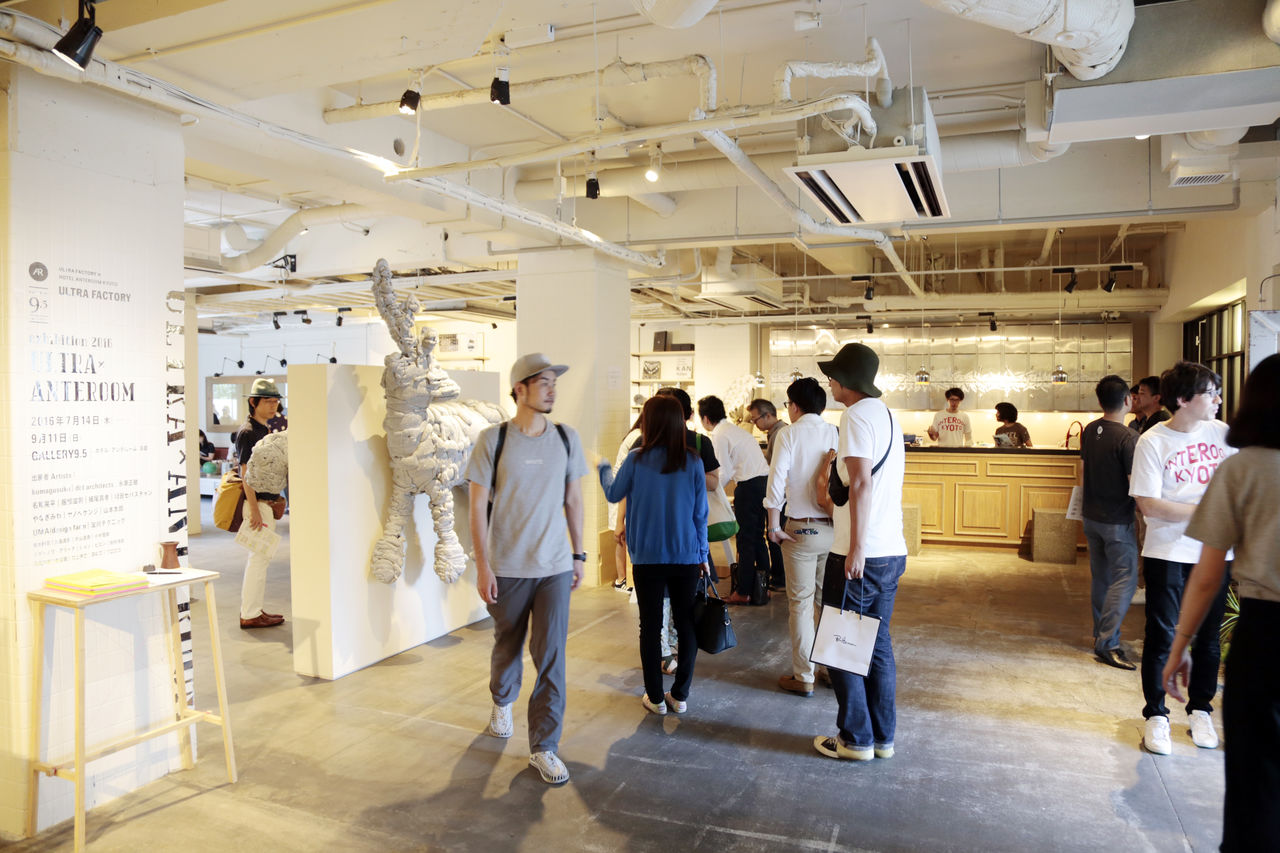 Adjoining the lobby of the Anteroom is a gallery that holds frequent exhibitions and other art events.

The Most Creative Meal of the Day

With this goal in mind, UDS designed the new hotel around the theme of “art and culture.” Under the artistic direction of sculptor Nawa Kōhei, contemporary artworks were installed throughout the building, and artists of note were commissioned to decorate individual guest rooms. The hotel was also equipped with a service apartment for use by an “artist in residence.”

Finally, there was the matter of breakfast . . .

KAJIWARA From the standpoint of business management, the most cost-efficient way for a hotel to provide breakfast is to adopt a standard daily menu and stick with it. That’s why business hotels all over Japan serve pretty much the same breakfast fare day after day. But are the guests really happy with this state of affairs? We didn’t think so.

At the Anteroom, we’ve managed to develop a creative breakfast menu that changes daily, even while keeping our rates within the business-hotel range.

When it comes to meals, most hotels view dinner as the main event. We thought it was time to challenge this paradigm. The Japanese hotel industry has undergone a quantum shift in recent years as it adapts to large numbers of inbound tourists looking for reasonably priced accommodations. As I see it, you can’t hope to compete on the strength of efficiency alone. My view is that it’s all about how happy you can make your customers. A good breakfast gives your guests energy to go about their day, and it also creates the last impression before checkout. Guests who eat a great breakfast just before they check out are more apt to leave satisfied and eager to return. When the customers are happy, the staff is more motivated, and the whole atmosphere of the hotel improves.

In Japan, UDS has played a pioneering role in the renovation and conversion of vintage buildings into boutique hotels, beginning with Hotel Claska Meguro in Tokyo, which opened in 2003.

KAJIWARA Meguro was also a little removed from the city’s main business centers and transportation hubs, but we liked the neighborhood. There were lots of artists and other of creative professionals living in the area, and Meguro-dōri street, where the building was located, was full of interesting home decor shops. The property itself, a hotel built around 1970, was a bit rundown, but the moment I saw it, I knew this was a spot where we could create something that would spur community development.

In our plans for the new facility, we included a cafe, a gallery, a dog-grooming salon, and an artists’ workspace. This turned the hotel into a multipurpose gathering spot with something to offer people from the community and surrounding neighborhoods, not just hotel guests.

Our work on Claska really impressed on me the need for hotels to create new value with an eye to customer satisfaction. The business of designing and operating a hotel is grueling work, and no one is going to stick with it unless our efforts result in satisfied customers. 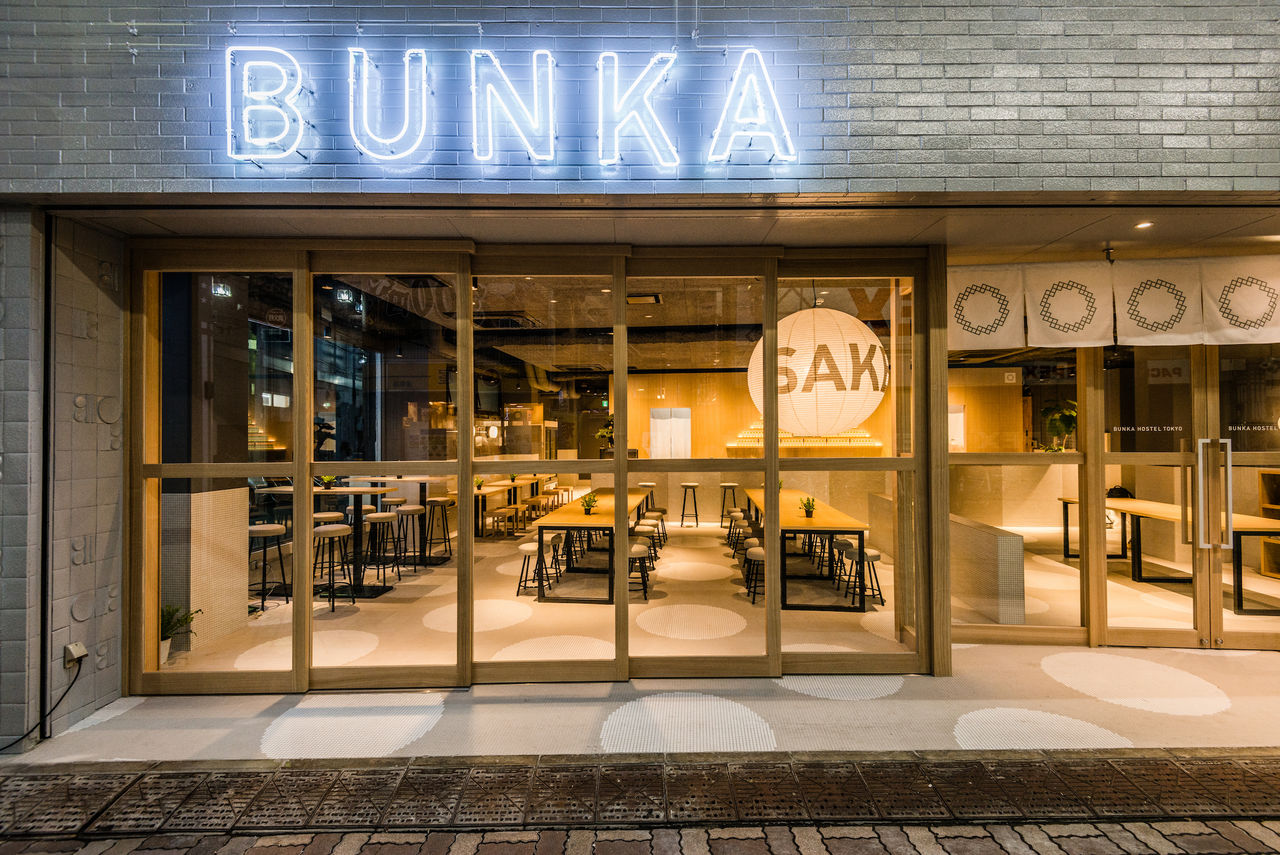 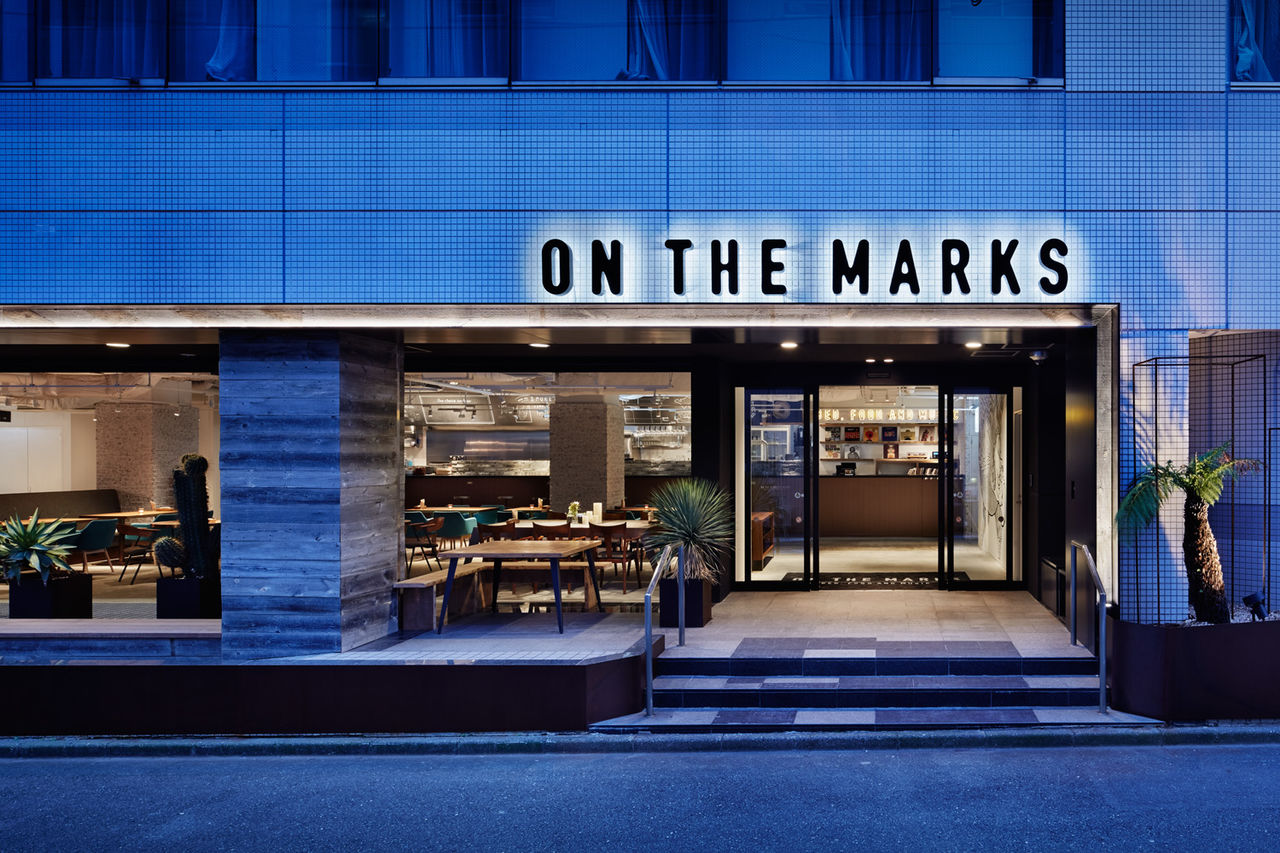 On the Marks Kawasaki at JR Kawasaki Station. 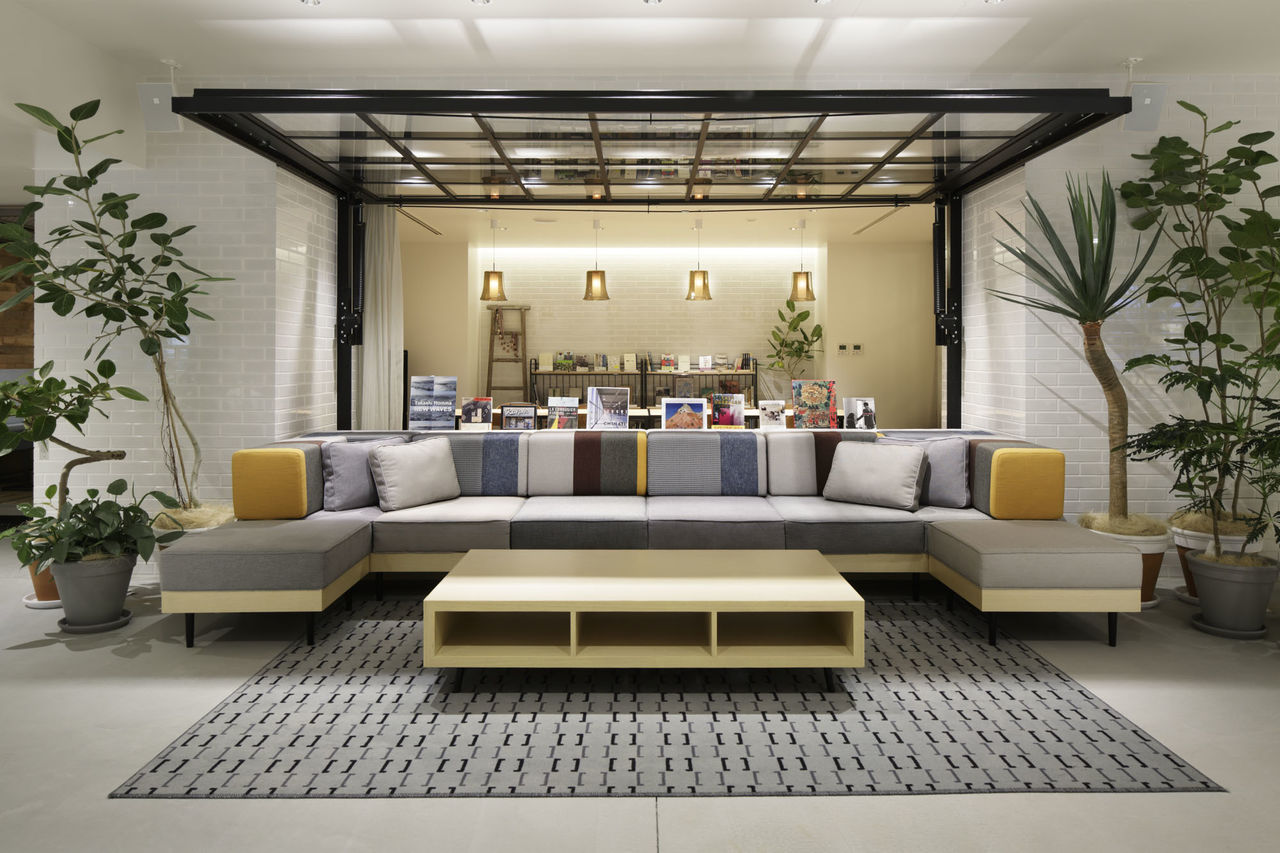 The lobby of the Hotel Edit in downtown Yokohama. 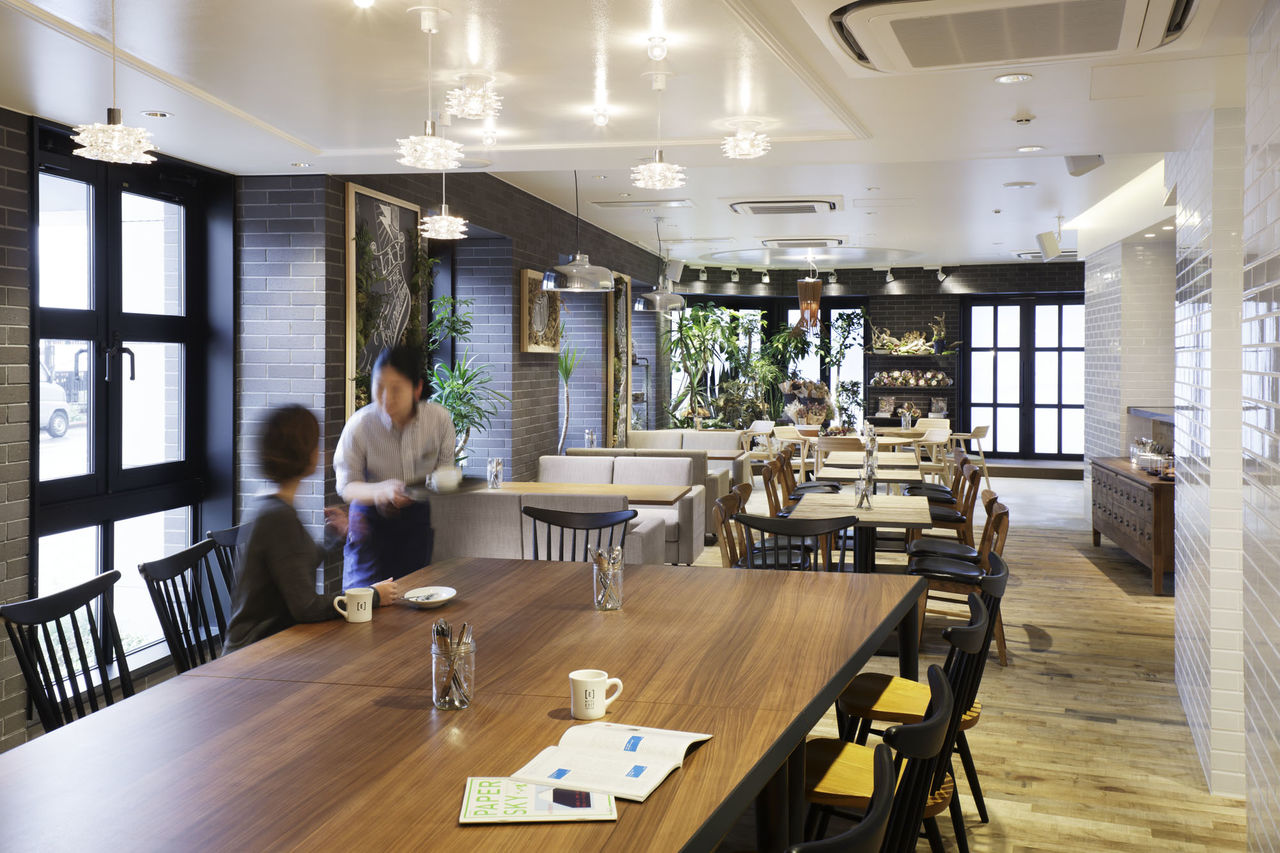 Birth of an Entrepreneur

So, where and how did Kajiwara gain the competencies required for this brand of entrepreneurship?

KAJIWARA Even as a high school student, I knew I wanted to start my own business, and I was eager to get out in society and dig in as soon as possible. I didn’t see any need for a university degree. But I realized that a successful business executive had to have physical and mental endurance as well as leadership and organizational skills, and I figured the best way to develop all of that was on a college sports team. So, I enrolled at Tōhoku University, which had one of the strongest rowing teams in Japan at the time.

When it came to finding a job after graduation, I initially set my sights on a small firm, where I could quickly gain experience in various aspects of the business, the aim being to set out on my own after about three years. Instead, I ended up with Recruit Cosmos, a large company with a high profile. The reason was that the Recruit scandal had just broken, and the company was facing a crisis.(*2) I thought it would be an invaluable learning experience to see how a business regained its footing when it was on the brink of disaster. I do have a contrarian streak!

KAJIWARA During my years at Recruit Cosmos, I was struck by how compartmentalized the business was. Someone in planning or design would present an idea, and the folks in the business division would dismiss it by saying, “It wouldn’t be profitable,” and that was the end of the conversation. The design people didn’t understand the business side of things, and the business people didn’t know anything about design, so there was inevitably a communication gap between the clients and users on the one hand and the designers on the other.

Even today, it’s fairly unusual for planners and designers to talk directly to clients about the business side of a development project. But how you design a hotel adapted to the client’s needs without an understanding of hotel operations and management? My view is that you can't. That’s why my company has stood by its unified approach, offering a complete, integrated package encompassing planning, design, and management.

Using this approach, we’ve gradually acquired experience and know-how handling a wide range of hospitality facilities, from relatively high-end hotels down to hostels. In addition to Claska and the Anteroom, our portfolio includes Hotel Kanra Kyoto, Hotel Edit Yokohama, On the Marks Kawasaki, and Bunka Hostel Tokyo.

An Eye to China

In the midst of all this, Kajiwara has been exerting himself to establish a presence on the growing Chinese market. In fact, he only recently returned to Japan after living in Beijing and Shanghai for the previous seven years.

KAJIWARA As I see it, if you want to get a foothold in a big emerging market, you need to start early. We undertook our first commercial development project in China back in 2006. In 2013, I launched UDS China, with offices in Beijing and Shanghai. The original plan was to spend five years getting the business up and running there before turning my attention to the Southeast Asian market. But China proved a tough nut to crack, and it took seven years instead of five.

In Beijing and Shanghai, I've been blow away by the high caliber of the Chinese staff. They’re all dedicated, passionate, and adept at functioning in a very competitive environment. I came away convinced that the Chinese are going to transform the hotel industry, and probably global business in general. Some of the most advanced AI research in the world is being carried out in China. So, what role does this leave for Japanese industry in the region? Of course, we have our own innovative technology to offer, but I feel that we need to draw on our traditional strengths first and foremost: craftsmanship, creativity, and hospitality.

The first collaborative project undertaken by UDS Japan and UDS China was Muji Hotel Beijing, which opened in June this year. This facility is a new member of [Ryōhin Keikaku Co.’s] Muji product line, and the plan, design, and management all embody the Mujirushi Ryōhin philosophy [of affordable quality through simplification and rationalization].

By the way, breakfast is going to be a major focus at Muji Hotel as well. It's still a work in progress, but over time, we’re aiming to revolutionize the entire concept of the hotel breakfast. 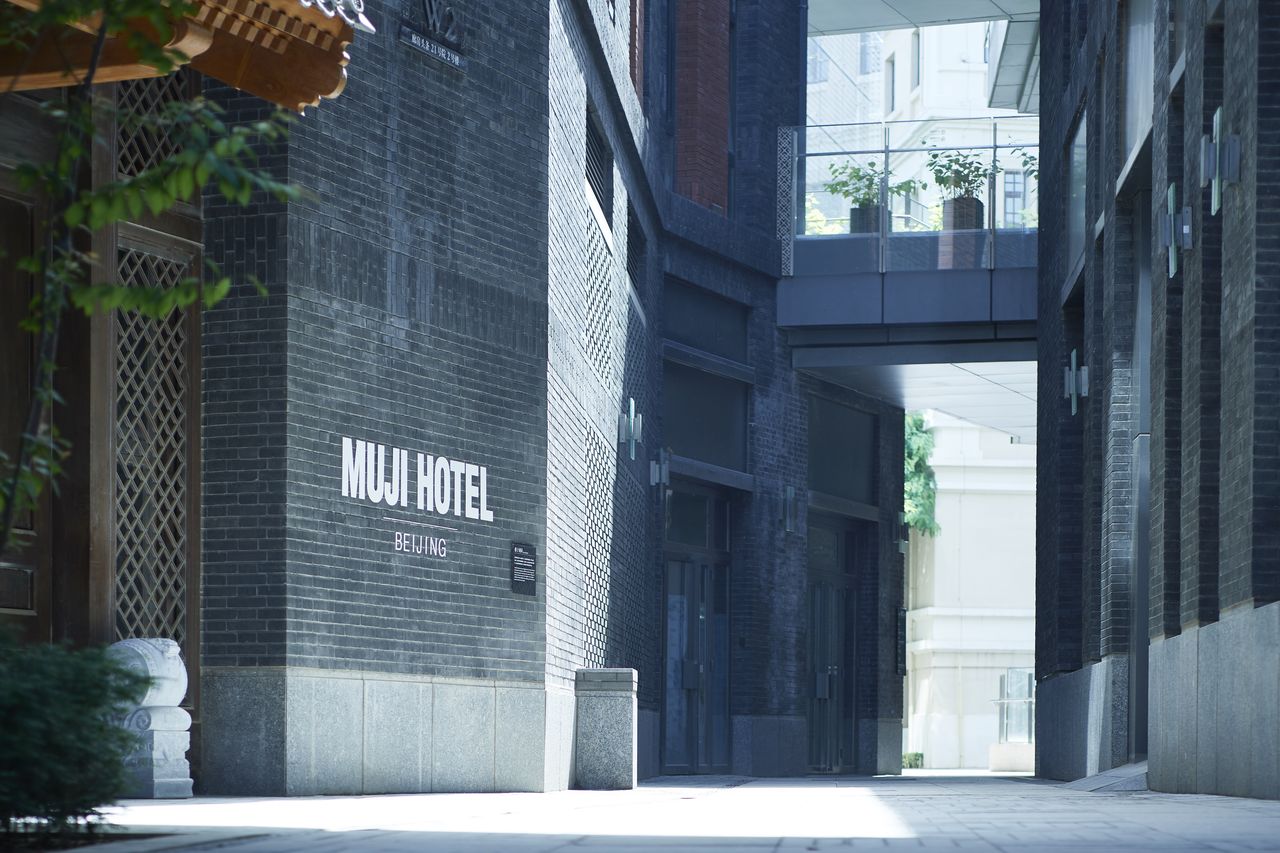 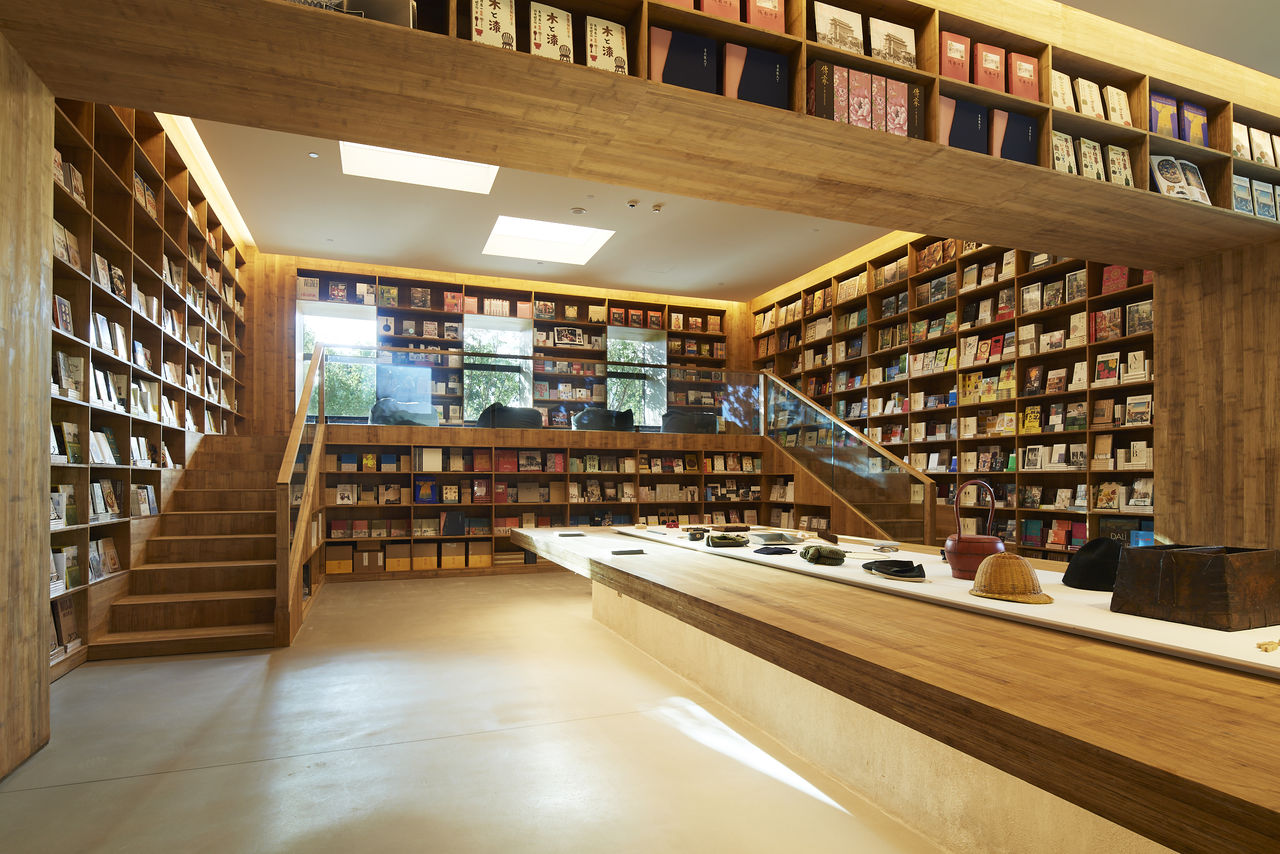 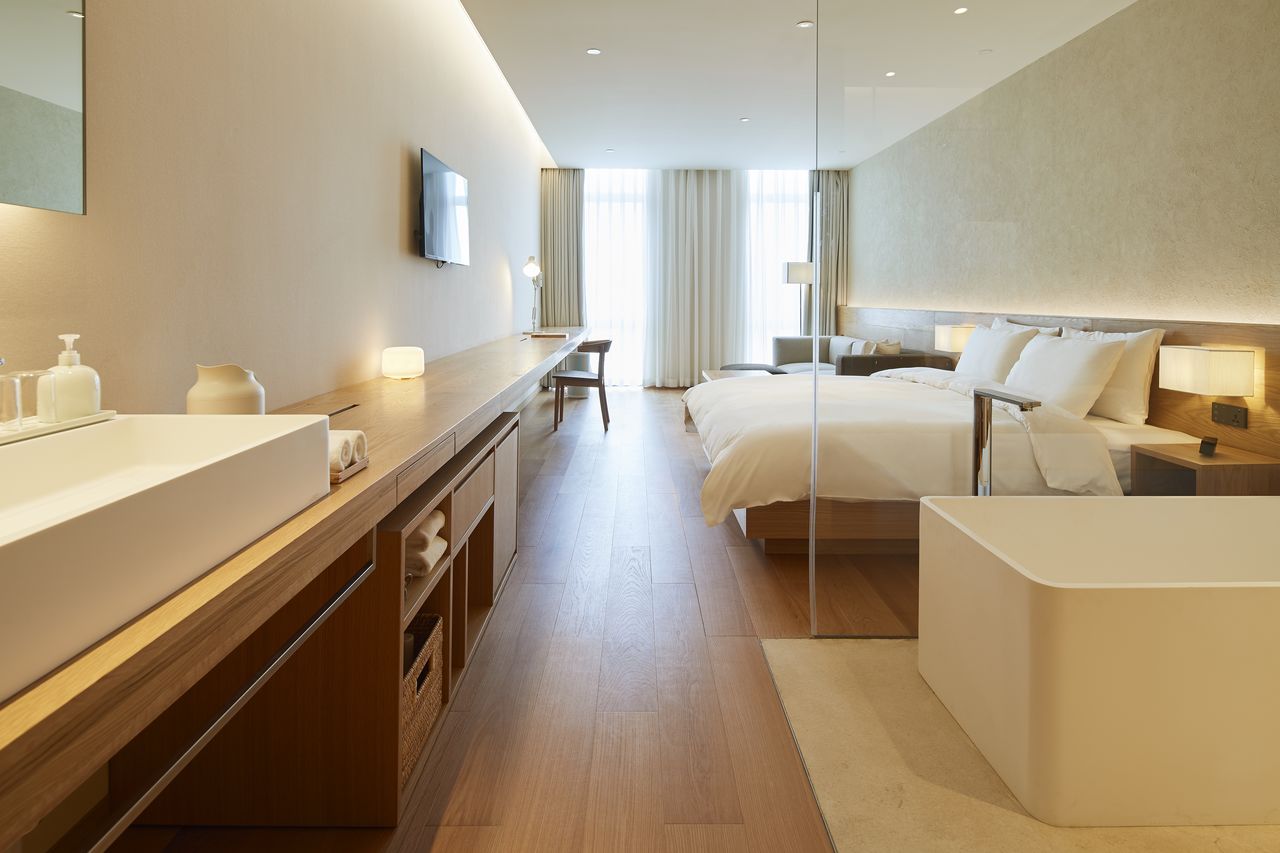 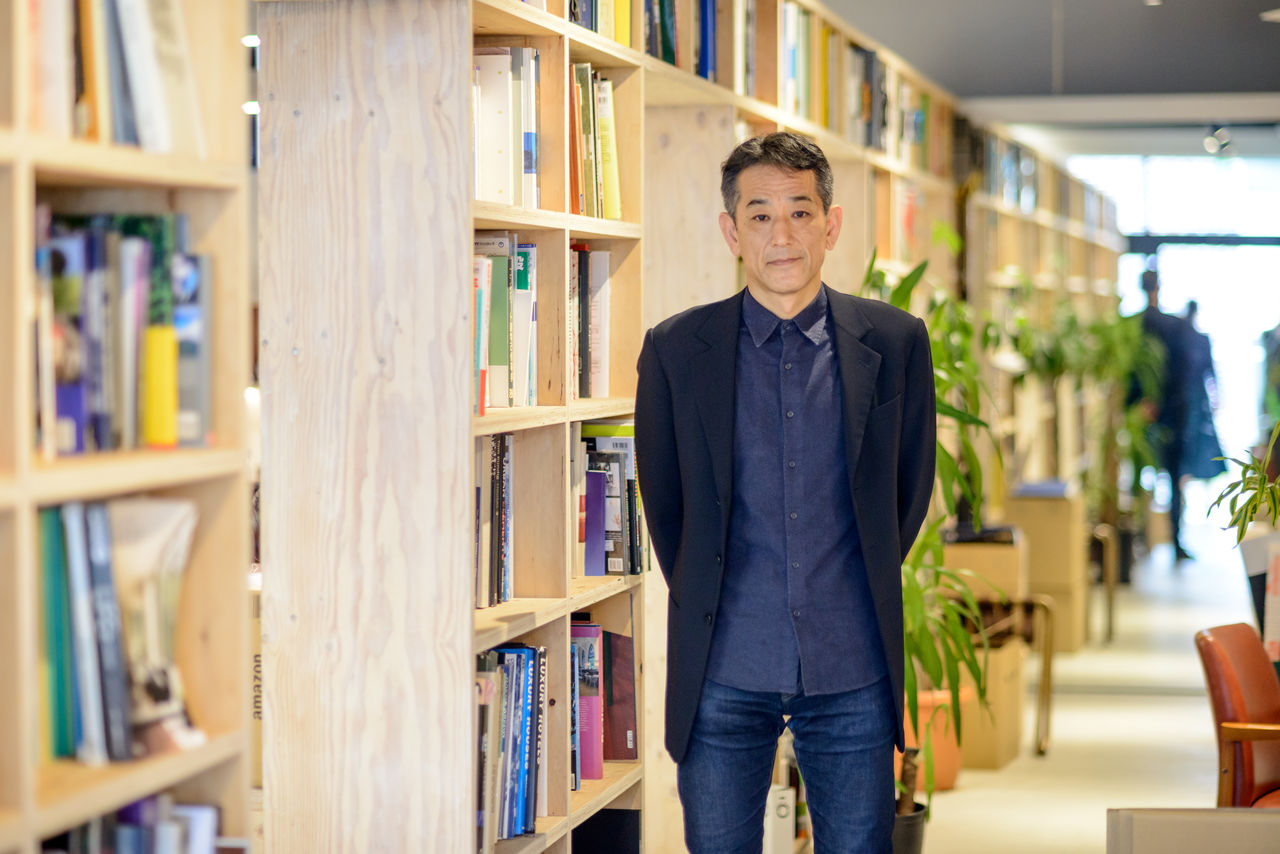 (*2) ^ The Recruit scandal was a far-reaching insider-trading and influence-buying scandal that broke in 1988 with revelations that the chairman of Recruit had treated senior politicians and government officials to a windfall by offering them shares in a new real estate subsidiary, Recruit Cosmos, just before it went public.