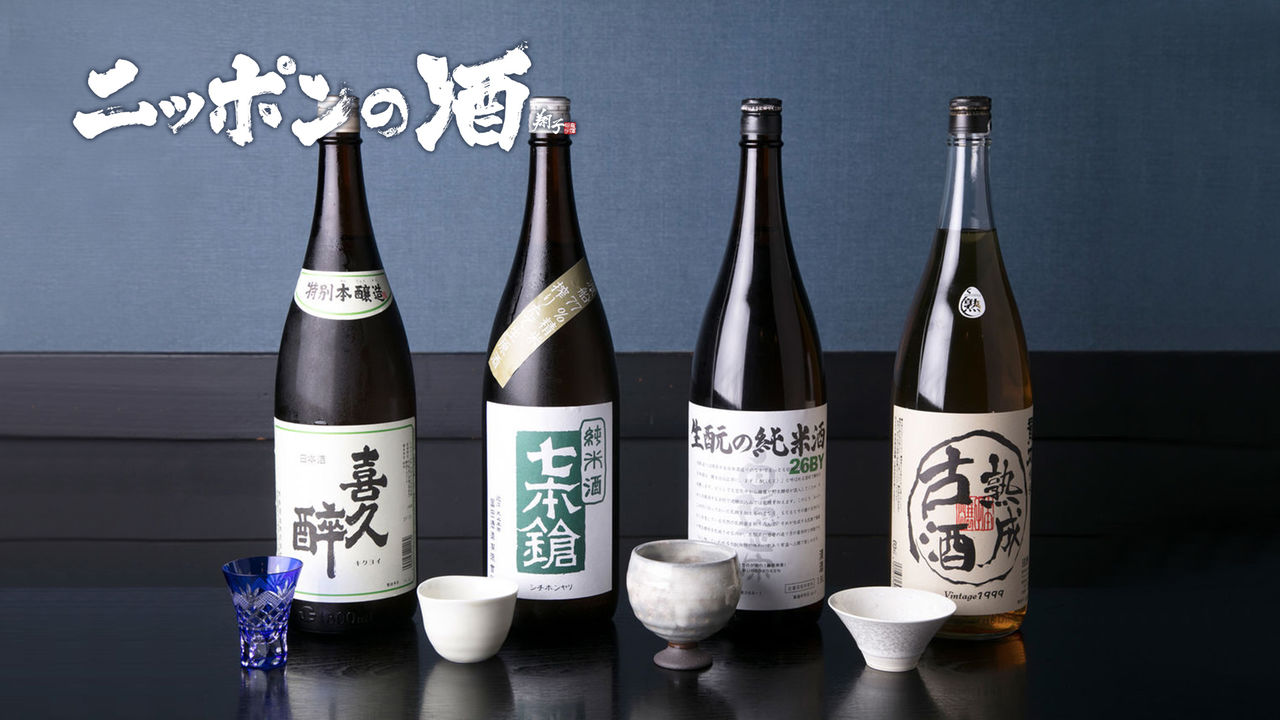 Culture Apr 9, 2018
Sake is hot! Or to be precise, premium-grade sake (most often served slightly chilled) has taken the global market for luxury liquor by storm. Fueling the frenzy is a growing selection of distinctive yet highly drinkable premium “craft sakes” that have captivated chefs, gourmets, and young urban consumers worldwide. In the first article in our series, sake authority Sandō Atsuko spotlights the sake renaissance and the intrepid young brewer-owners who have spearheaded it.

The past 10 years have been a time of unprecedented ferment in the world of sake. As Japanese cuisine has gained in popularity worldwide, international fans and devotees of sake have proliferated, sending overseas sales soaring. Exports of nihonshu (the more precise Japanese term) have risen each year, almost doubling by volume between 2006 and 2016 and increasing 2.5-fold by value.

One of the makers driving the boom is Asahi Shuzō, producer of the acclaimed Dassai. In 2005, the tiny brewery in rural Yamaguchi Prefecture shipped just 216 kiloliters of its product. Over the next few years, however, the owner pursued a bold new strategy, focusing exclusively on small-batch premium sake. The gamble paid off, and by 2013, the company’s sales had risen 10-fold. Dassai’s reputation has spread rapidly among chefs and foodies worldwide. In 2018, Asahi Shuzō is scheduled to open a combination sake shop, bar, and French restaurant in Paris in collaboration with French celebrity chef Joël Robuchon. 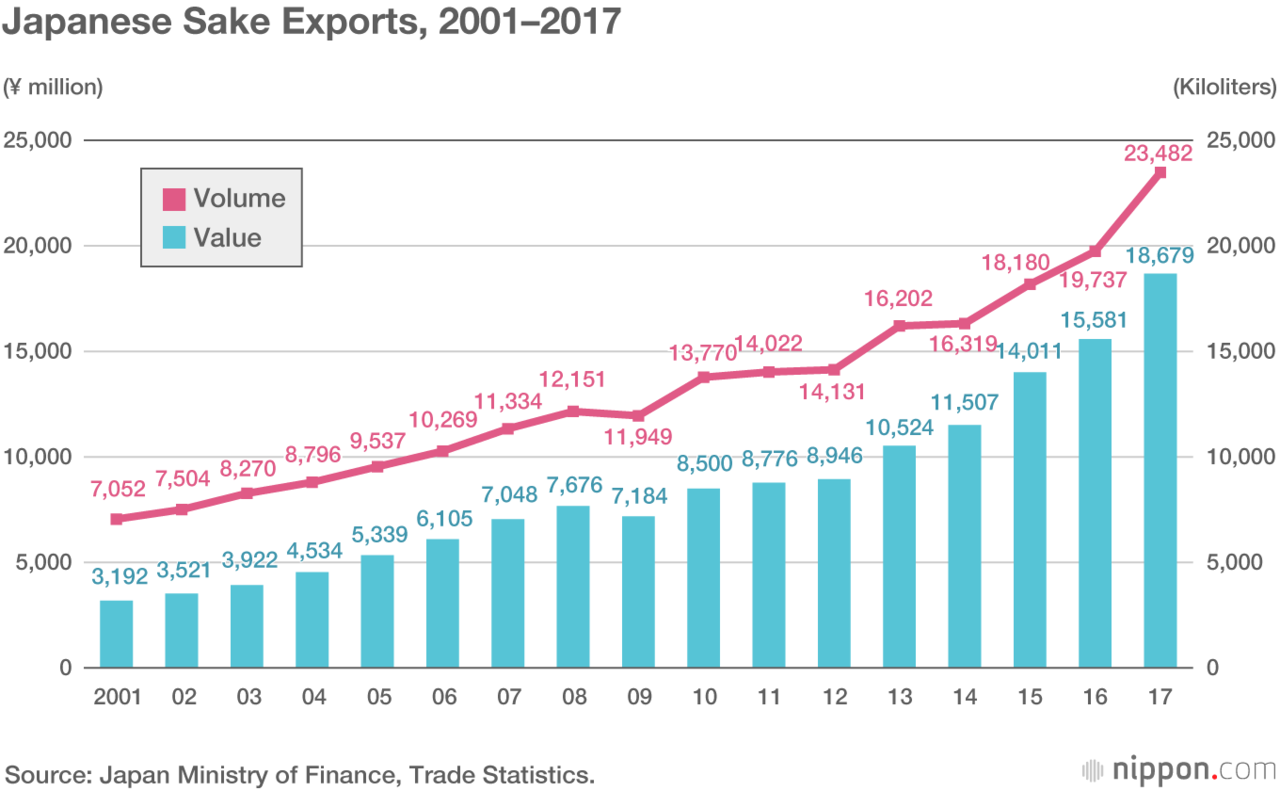 A related trend is the rise of sake making outside of Japan. Unlike the overseas production facilities established previously by big Japanese commercial brewers, these are microbreweries founded by non-Japanese sake enthusiasts in their own countries, such as Britain, Canada, Norway, Spain, and the United States. (See Sake London-Style: Britain's First Sake Brewery to learn how the drink is gaining popularity overseas.)

Not Your Grandfather’s Sake

At first glance, the situation within Japan looks very different. Overall production and sales of nihonshu have continued their year-by-year decline. By volume, domestic sake sales are less than a third of the level posted in 1973, at the industry’s peak. This trend reflects a dwindling market for inexpensive mass-produced sake. Once the go-to beverage for casual, everyday drinking in Japan, such sake steadily yielded market share to an increasingly diverse selection of beers, whiskies, wines, and liqueurs, as well as shōchū (a generally inexpensive distilled liquor) and mixed drinks like chūhai (made from shōchū). Abandoned by everyone, it seemed, except Japanese gentlemen of a certain age, nihonshu was spoken of as a relic of the past.

But the situation has changed, especially in the past ten years. In Japan as elsewhere in the world, carefully crafted junmai and ginjō sake(*1) has gained in popularity, making particularly rapid inroads among twenty-somethings, women, and the international community. Hard-to-find brands of junmai ginjō have acquired a special mystique and attracted something akin to a cult following. The media have responded to and fueled the craze with frequent reviews and profiles. 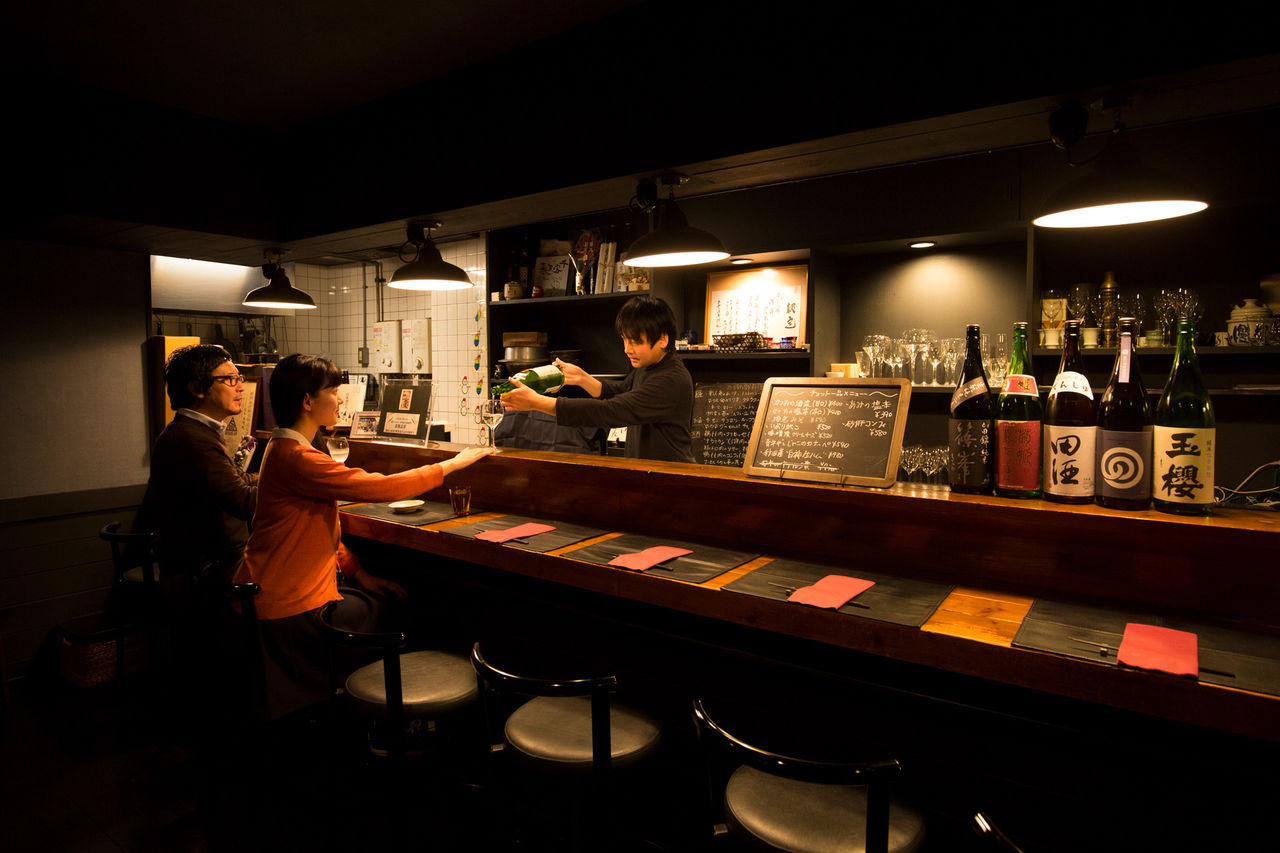 At MiwaMiya in Tokyo’s Asagaya neighborhood, premium sake is paired with bistro-inspired dishes and served in vessels carefully chosen to bring out the special qualities of each selection.

Why, after all these years, has sake suddenly become a global sensation? How has it won back Japan’s fashion-conscious young urban consumers? The simple answer is that nihonshu has changed dramatically over the past 20 years as intrepid makers have gone all out to develop distinctive new varieties—smooth yet rich in flavor and aroma—that appeal to cosmopolitan tastes. Japan has witnessed a sake revolution, spearheaded by a brash new generation of owner-brewers.

Rise of the Craft Brewers

Take Aoshima Takashi, the creator of Kikuyoi. As a young man, Aoshima forsook the family brewing business for a promising career at a securities firm in New York. But after living the high life in Manhattan for few years, he realized that rural Shizuoka Prefecture was calling him home. Starting at square one, with the cultivation of his own organic rice, he threw himself into the craft of sake brewing and came up with a winner. Then there is Kuno Kuheiji, a former Paris fashion model who launched the premium brand Kamoshibito Kuheiji, based in Aichi Prefecture. And Usui Kazuki of Senkin Shuzō, who trained as a sommelier before returning to his ancestral home in Tochigi Prefecture to turn around his family's business. While the specifics of their careers vary, each of these innovators initially made his way in a different milieu before taking over the family business and transforming it with a new approach to sake making.

What distinguished them from their elders above all was their determination to get down and dirty in the role of “owner-brewer” (as opposed to “brewery owner”). Instead of outsourcing the nuts and bolts of sake making to itinerant toji, or brewmasters, as their fathers and grandfathers had done, they took direct control over each stage of the process in an effort to leave their own individual mark on the craft. By weaving sophisticated new brewing technologies into a traditional, meticulously artisanal handcrafting process, they were able to create products that reflecting their own personal ideas about how nihonshu should taste and smell. In the process, they upended the conventional wisdom about “good sake,” which emphasized a clean, dry taste that barely lingers on the tongue. They were after a completely different sake-drinking experience. 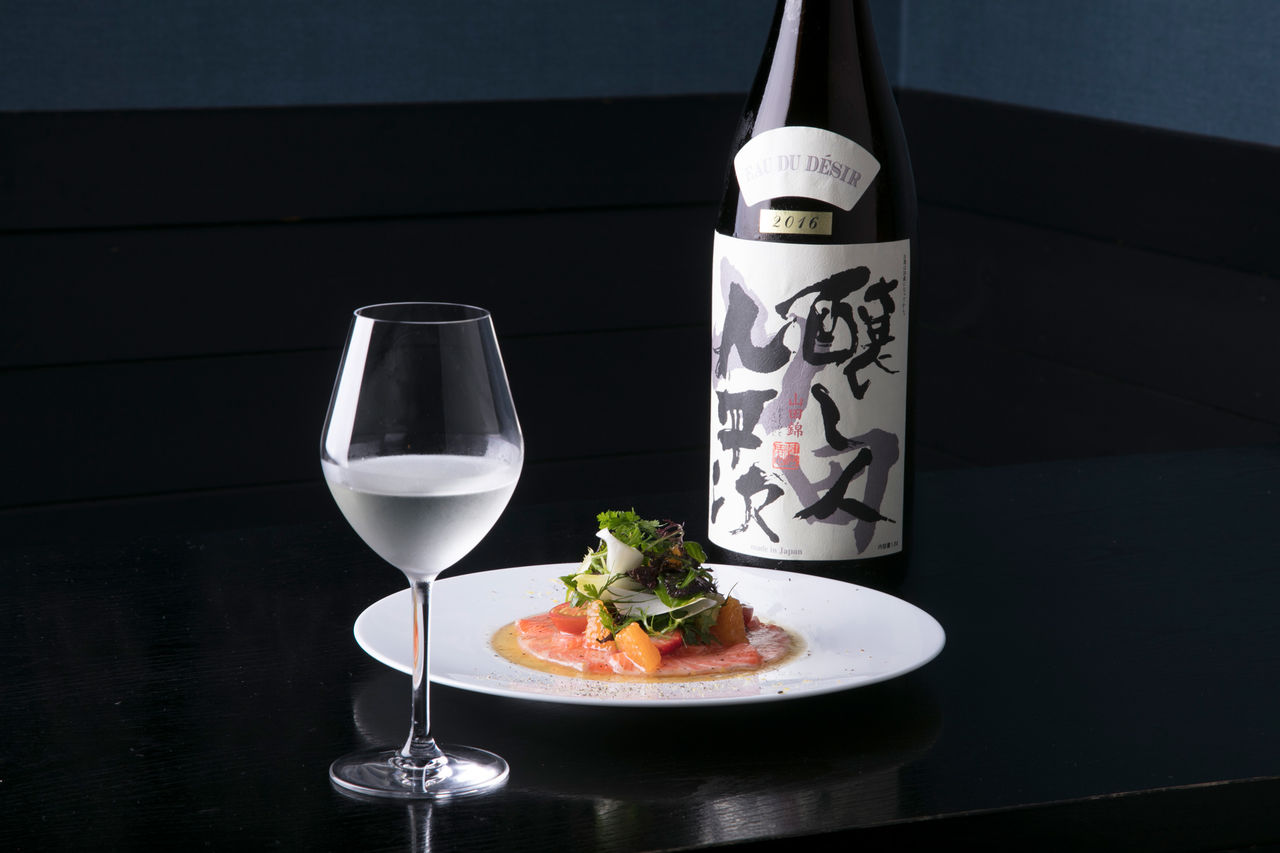 Kuheiji 2016 Eau du Desir (Yamadanishiki junmai daiginjō) complements the complex aromas of the elegant cold dish with which it is paired: salmon marinated in olive oil and dressed with dekopon (a Japanese citrus hybrid also known as Sumō Citrus), strawberry, tomato, microgreens, and herbs. (Courtesy of MiwaMiya, Asagaya, Tokyo)Perhaps the archetype of this new breed of sake maker is Takagi Akitsuna, the fifteenth-generation owner of Takagi Shuzō. After taking over the 400-year-old Yamagata Prefecture brewery in 1993 at the age of 21, Takagi dedicated himself to crafting a new sake with his own two hands. He was after a vibrant, rich flavor quite unlike that of the dry, light sake in favor at the time. In 1999, he launched Jūyondai (literally, fourteen generations), featuring a flavor profile rich in umami and an aroma of fresh-picked fruit. Jūyondai caught on first among urbanites in the Tokyo and Kyoto-Osaka regions—cosmopolitan consumers at home with the foods and wines of the West as well as traditional and modern Japanese cuisine. With limited production, Jūyondai quickly became hard to obtain and consequently even more desirable.

It is with good reason that Takagi has been dubbed the “prince of the sake renaissance.” By the 1990s, sake brewing had taken on the doomed look of a sunset industry. Many small breweries around Japan had gone out of business, and those that remained were treading water. In such an environment, fulfilling one’s duty as heir to the family business could seem like a thankless task. The success of Jūyondai gave hope to a new generation of sake makers by demonstrating the viability of a business model predicated on limited sales of high-end handcrafted sake. Inspired by Takagi’s example, other sake makers threw their energies into the craft of brewing premium nihonshu. As such premium brands proliferated and attracted an ever-larger following, competition among the brewers intensified, spurring further advances in sake-brewing technology.

Of course, this change did not occur overnight. The trend began as little more than ripple on the surface. But in the last 10 years the wave has gathered force, gradually changing the face of sake making across the country.

Handcrafted with the finest ingredients and incorporating cutting-edge brewing technologies, these artisanal sakes do not lend themselves to production in quantity, and some are extremely hard to come by. But their distinctive and seductive appeal has captivated not only Japanese fans but also chefs, sommeliers, and gourmets around the globe.

The world of sake is wide, deep, and endlessly complex, but a little knowledge can go a long way toward enhancing one’s enjoyment. In this series of articles, we introduce some of the latest developments in the brave new world of nihonshu, along with the fundamentals of sake making, sake tasting, and sake terminology.

(Originally published in Japanese. Banner photo: Sake cups in a variety of shapes, sizes, and materials can help accentuate the distinctive flavors and aromas of today’s craft sake. All photographs by Kawamoto Seiya. Series banner image by calligrapher Kanazawa Shōko.)

(*1) ^ Junmai (“pure rice”) sake is brewed from rice, water, yeast, and kōji mold without the addition of distilled alcohol. Ginjō sake is a special type of premium sake made from highly polished rice and fermented at low temperatures. See "Know Your 'Nihonshu': Types of Sake and Their Characteristics."