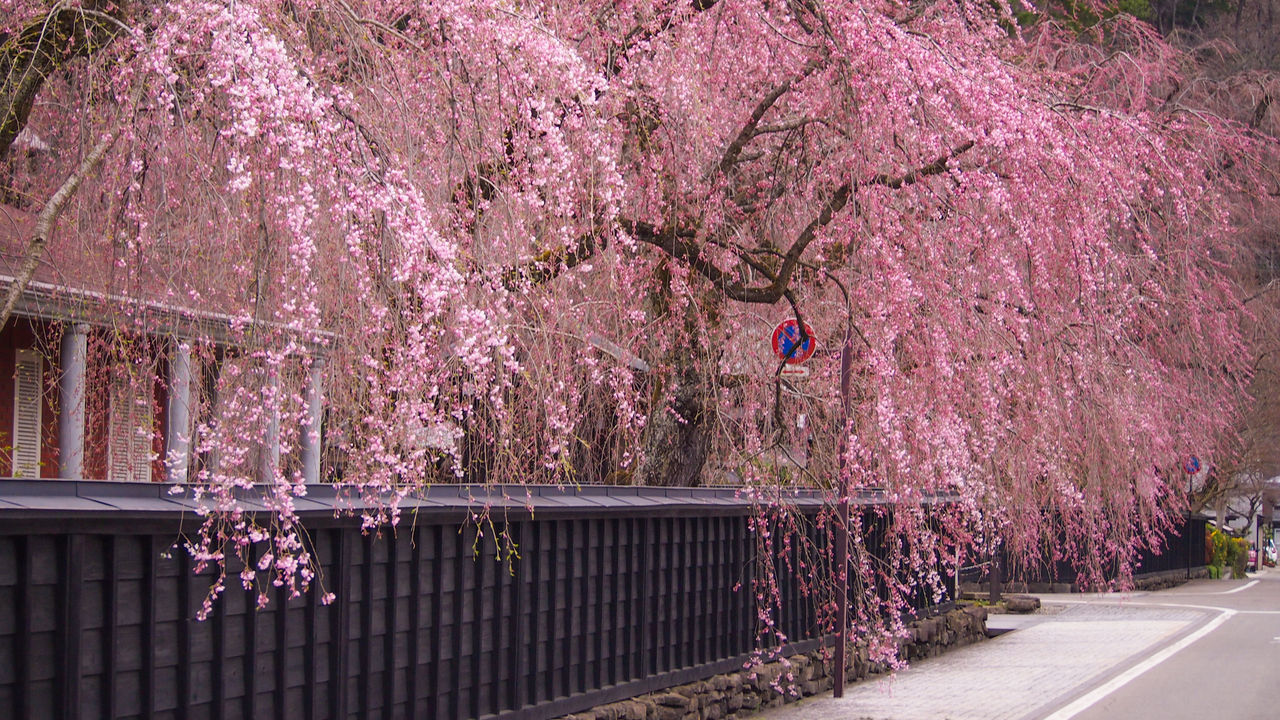 Tōhoku in Full Bloom: The Sakura Festival of Kakunodate

Apr 18, 2018
Kakunodate, a district in the Akita Prefecture city of Senboku, is home to two celebrated sakura spots. The weeping cherry trees of the city’s old Samurai District take on new beauty at night, when they are illuminated for visitors, and rickshaws are available for flower-viewing on the go.

Step Back in Time with the Blossoms in the Samurai District

Founded as a castle town in 1620 by the Ashina clan, Kakunodate later came to be ruled by the North Satake family. Today part of the city of Senboku, the district features streets that remain largely unchanged since the Edo period, with many original samurai manors still standing, and it has been called the “little Kyoto of Michinoku,” an old term for northeast Japan.

Kakunodate is at its most dazzling in sakura season, when the cherries are in full bloom. In the Samurai District, weeping cherry trees planted in the manor gardens arch gracefully over the fences and gates to line both sides of the street with blossoms. The contrast between the stern black fences (kuroita-bei) and the pale crimson of the sakura is striking. 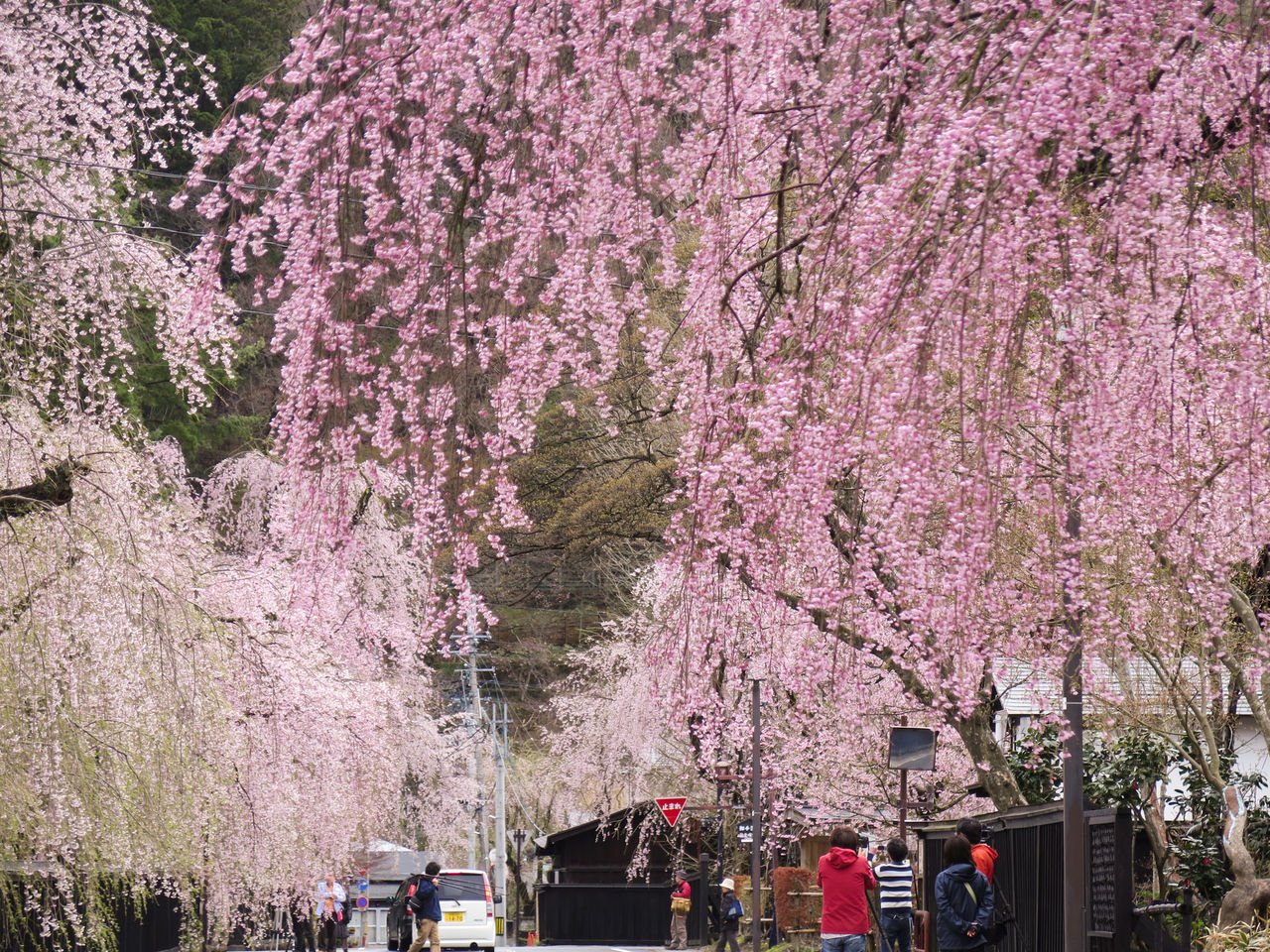 The weeping cherry trees of the Samurai District are at their finest toward the end of April.

Around 400 weeping cherry trees stand in the gardens of Kakunodate today, but tradition has it that the town began with just three. In the seventeenth century, Satake Yoshiaki, the second lord of Kakunodate to hail from his family, married a woman from the aristocratic house of Kyoto Sanjō. She is said to have brought three weeping cherry saplings with her as part of her trousseau. There are still many great sakura trees in Kakunodate that are more than three centuries old, and 162 of the town’s trees have been designated natural monuments by the Japanese government.

Visitors to the Samurai District can enter the grounds of some of the houses, including the Ishiguro Manor and Aoyagi Manor, to view the sakura from within the gardens. They can also hail a rickshaw and enjoy a ride through the historical streets themselves. The weeping cherry trees of the Kaba Craft Denshō-kan museum are also dazzling, making them popular with photographers. Inside the museum, kabazaiku (cherry bark craft) artisans hold regular demonstrations showing how they bring the unique gleam of the yamazakura hill cherry to life in their work. 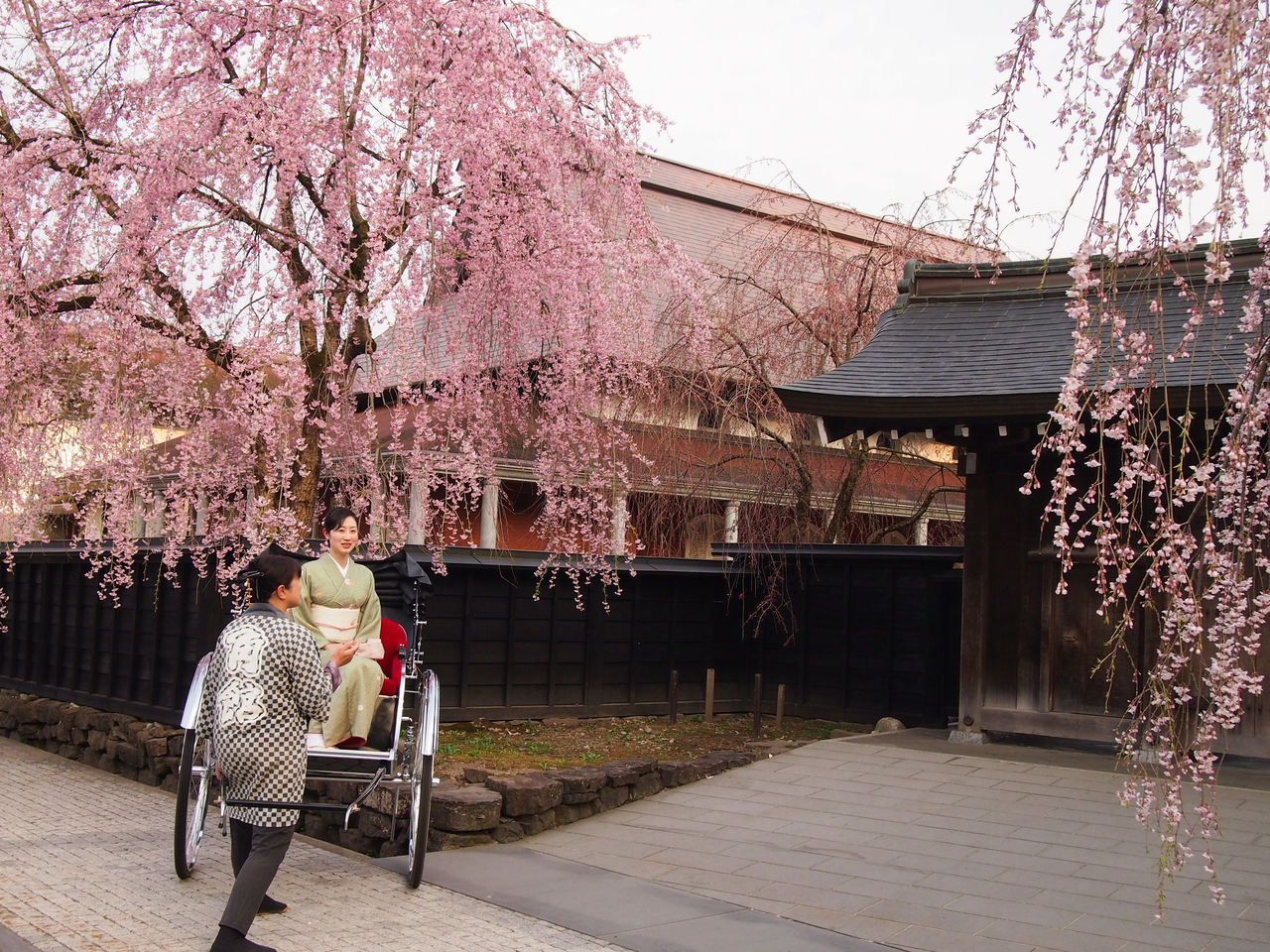 Rickshaws depart from outside the entrance to the Kaba Craft Denshō-kan.

Blossoms on the Bank of the Hinokinai River

Kakunodate’s other famous sakura spot is three minutes’ walk from the Samurai District, where somei-yoshino cherry trees line the path along a two-kilometer stretch of the lazily curving Hinokinai River’s embankment. This feature dates back to 1934, when around 400 trees were planted in honor of the birth of the crown prince (now Emperor Akihito) the previous year. In the last weeks of April each year, all the trees bloom together, turning the path along the embankment into a tunnel of sakura perfect for a leisurely stroll. 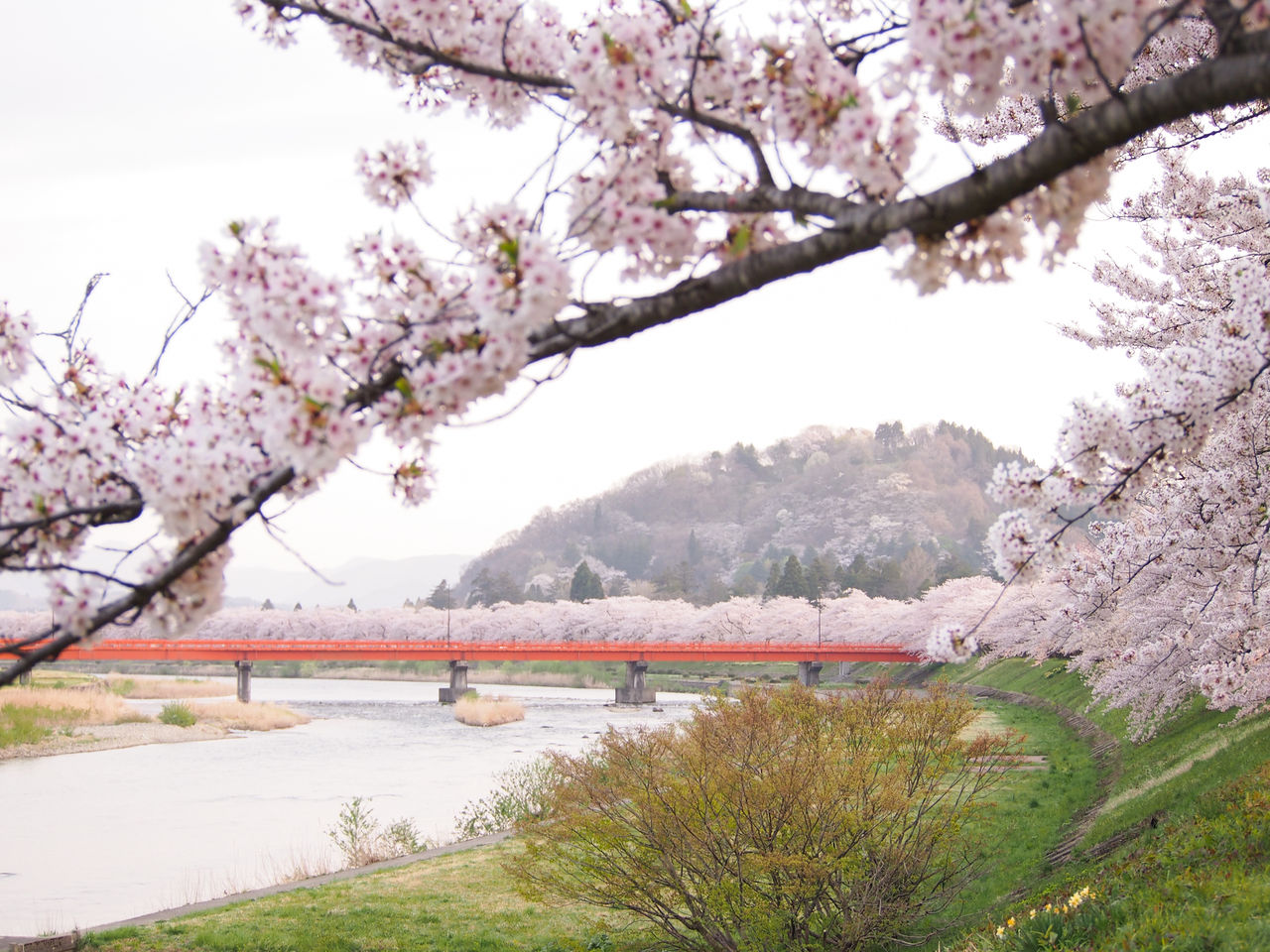 The Hinokinai River runs through the heart of Kakunodate.

The Sakura Festival of Kakunodate runs from April 20 to May 5 each year. Visitors can rent kimono from the Haikara Costume Experience (haikara is an old-fashioned word for “stylish” or “modern,” originally from the English “high collar”), and the sakura of the Samurai District are lit up for night viewing. Because the weeping cherry blossoms of the manors reach their peak slightly out of sync with the Yoshino cherry trees along the embankment, an unusually extended flower-viewing season is one of the charms of the Kakunodate spring. 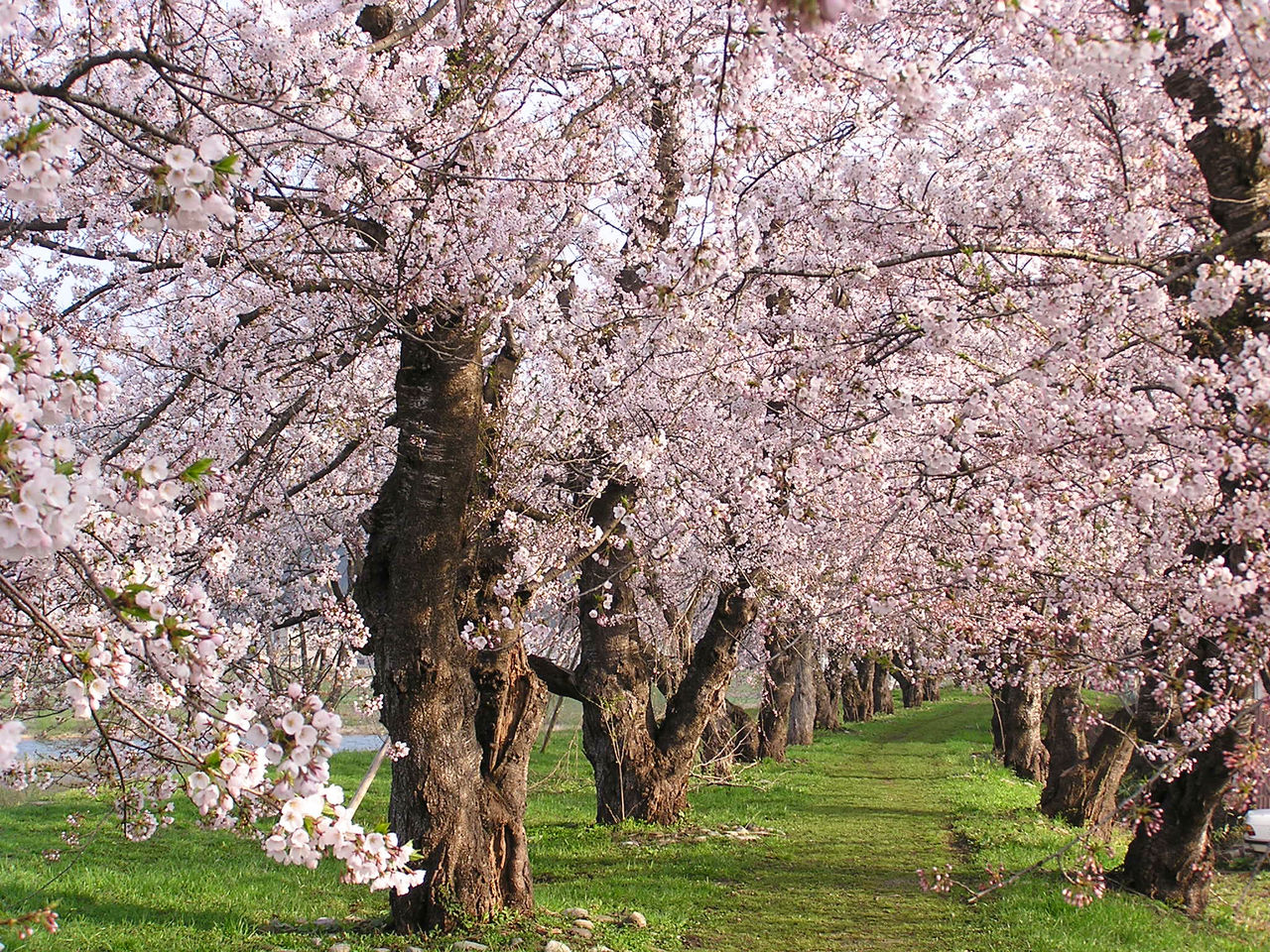 Like the Samurai District, the Hinokinai River embankment was chosen as one the Top 100 Cherry Blossom Spots in Japan. 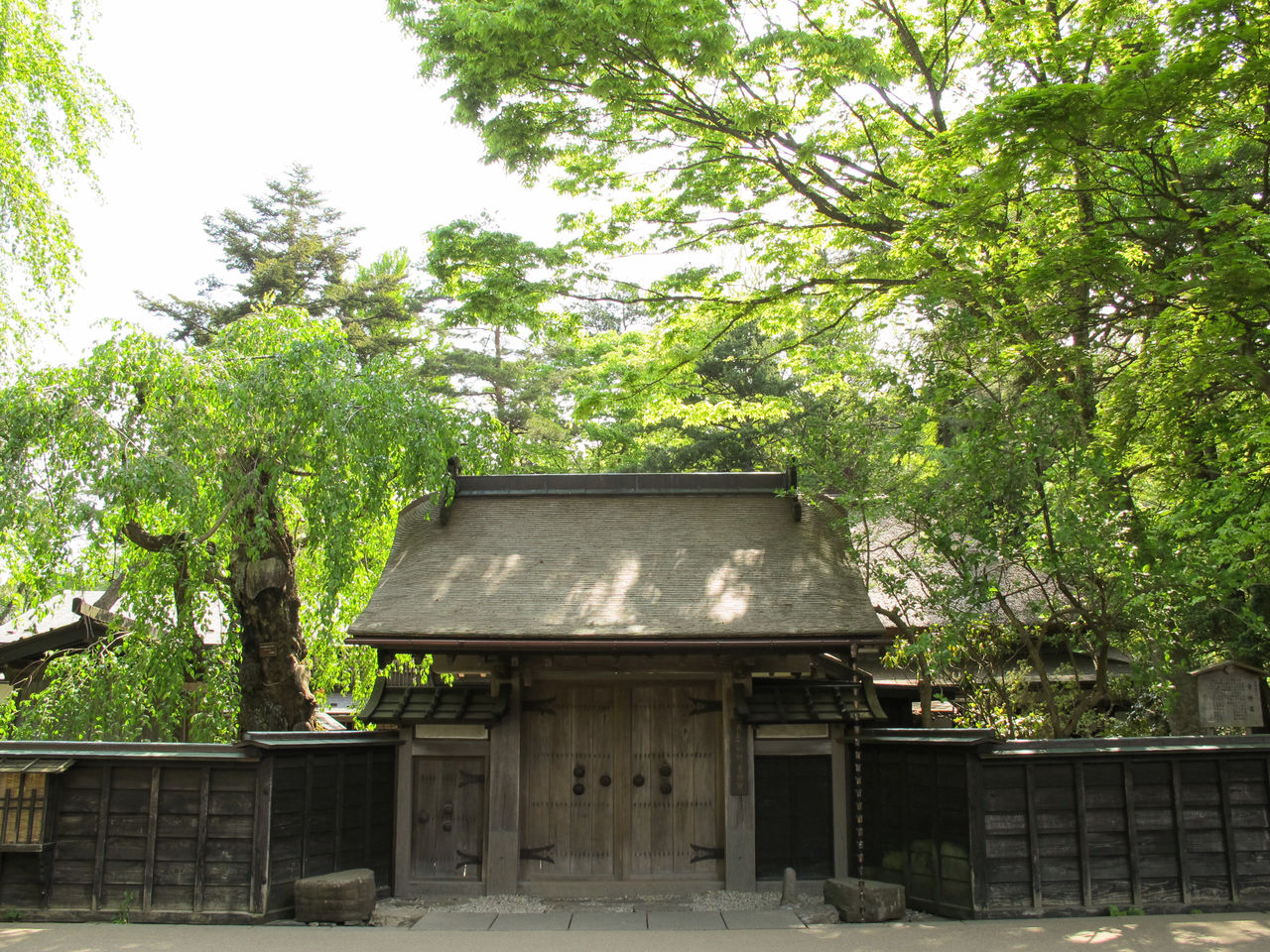 Only elite samurai who had made a great contribution to the clan were permitted to construct a gate in the high-roofed yakuimon style.

Even among the grand houses of Kakunodate’s Samurai District, the Aoyagi Manor stands out with its imposing yakuimon gate, constructed in 1860. The manor’s grounds today house six separate museums and galleries on 2.5 acres, from the main house, unchanged for 200 years, to the armory, which contains locally produced swords and other equipment, including the exquisite Koboshi Kabuto helmet, an Aoyagi family treasure created from 62 separate plates. The gardens of the manor are stunning, and home to 600 species of plant including the Aoyagi Yaebeni Weeping Cherry—the only tree of its kind in the country—which blooms a purplish crimson every year from late April through early May.

(Text and photos by Shoe Press. Banner photo: The weeping cherry trees contrast beautifully with the black fences of the Samurai District. All photos courtesy of Kakunodate Tourist Association.)